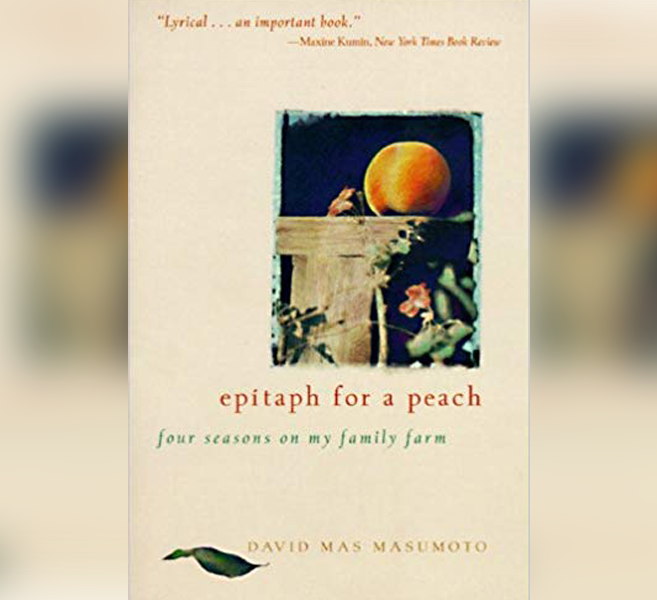 In 1995, David “Mas” Masumoto’s novella, “Epitaph for a Peach: Four Seasons on My Family Farm,” was published to unexpected acclaim. It was a lilting dreamscape of memory, meditation and soliloquy. Divided into four seasons, the book follows the cycle of life that spirals around a small family farm in Del Rey, Calif. Masumoto was born in the San Joaquin Valley. He is a third-generation Japanese American farmer who has devoted much of his life to saving the Sun Crest peach. But even he knows it is a lost cause.

The Sun Crest is the best peach that you will never taste. Harvested in mid-summer, it has an amber glow and a short shelf life that have doomed it to the back bins of your grandparents’ memories. Overtaken by newer breeds that explode with color and never seem to spoil, the Sun Crest is an heirloom peach that nobody wants.

At first glance, Masumoto’s book appears to be a simple homily to his quixotic battle to find a home in the modern marketplace for his harvest. But the deeper beauty of “Epitaph” surfaces gracefully and the poetry of the world he elegizes is irresistible. Masumoto is honoring the sacred and attempting to save not just an heirloom peach, but a way of life that is in danger of disappearing forever, as well.

Farmers plant hope and cultivate heartbreak. As an organic grape and peach farmer on an 80-acre farm, Masumoto must reckon with the unpredictability of a late summer rainstorm that can ruin an eternity of hard labor in a single afternoon. He must calculate the delicate algorithm of seed, fertilizer, water and labor that is constantly shifting because he is working within an ever-changing environment.

During the last 70 years, farmers have seen a revolutionary change in American agriculture that has required them to redefine their relationship to the land. After the conclusion of World War II, all the forces of technology that had been used to defeat the Axis were turned upon the family farm. It was a golden age fueled by the childlike belief that chemistry could provide what Mother Nature had forgotten.

Initially a convert to the miracles of modern science, Masumoto is now an evangelist for collaboration and cooperation with his surroundings. His farming philosophy revolves around working with the land rather than imposing his will on the implacable. To traditionalists obsessed with order and sterility, his farm looks abandoned. Wild grasses grow among his orchard trees and weeds sprout unrestrained from pesticides and defoliants. Masumoto is a Zen priest trapped in the body of a Central Valley organic farmer and he has learned the hard lesson of letting go what can never be possessed. After all, he is growing peaches and grapes in a desert that has only been made arable because of the great rivers of water that have been diverted from the north to transform his valley. A self-admitted novice who learned slowly through his mistakes, Masumoto’s book is a primer on his farming education and his ability to live within the chaos that envelopes him; yet it is also about his own unassuming journey of self-discovery as a husband, father and son.

As a young man, the now-65-year-old sansei yearned to escape the familiar and explore the big city, where life seemed more vital, exciting and meaningful. Masumoto attended the University of California, where he majored in sociology and immersed himself in the vibrant student protests and rich, intellectual roux of Berkeley. Yet after graduation, Masumoto realized that everything he was seeking was waiting for him at home and he returned to the family farm to continue the work of his father, and his grandfather before him. While his classmates were busy scaling the corporate mountains of more lucrative professions, Masumoto studied at the feet of his father and struggled with the vagaries of running a small farm.

Hoping to spread the word about his orphan fruit, Masumoto initially sent his story to the Los Angeles Times simply to draw attention to the plight of the Sun Crest. But his writing is gorgeously filled with gentle spasms of sunlight, wonder and whimsy that fill the pages of “Epitaph” from start to finish. There is an intimacy to his narrative that flows out of his work on the land that is undeniable and unfettered. Nestled among his anecdotes and insights are moments of sheer beauty, like his recollection of the outdoor wooden platform his issei grandfather built adjacent to the family home where children would gather after dinner to escape the summer heat and trace the falling stars that shot across the enormous sky before they disappeared into the dreamy darkness.

Just as ineffable is his luscious and exuberant description of eating a Sun Crest peach at the peak of its glory, its juices and flavor declaring the timeless joy of an eternal summer with every bite. In a world that is spinning faster and leaving many of us increasingly untethered and bewildered, Sun Crest peaches and writers like Masumoto remind us of a life we may have left behind forever, but that we should never, ever forget.