The event began with a lively performance by Puna Taiko Club, followed by a blessing by Rev. Naohiro Hotta of the Hilo Daijingu Temple. The banquet also included a kagami biraki, or breaking open the sake barrel, ceremony by honorees Eric Inouye and his aunt, Shinae Hirano, from Hirano Store, and Gene Yamada and his son Bryce from Yamada Furniture and JCAH president Mike Miyahira.

The two businesses were highlighted in a video presentation. It told the story of issei Naojiro Hirano’s journey from Shizuoka Prefecture to the establishment of the now-101-year-old Hirano Store in Glenwood, and of 90-year-old Yamada Furniture’s issei founder, Iwakichi Yamada, who immigrated to Hawai‘i from Kumamoto. The video showed how both businesses overcame challenges and hardships and involved family members who were determined to keep the family business going. 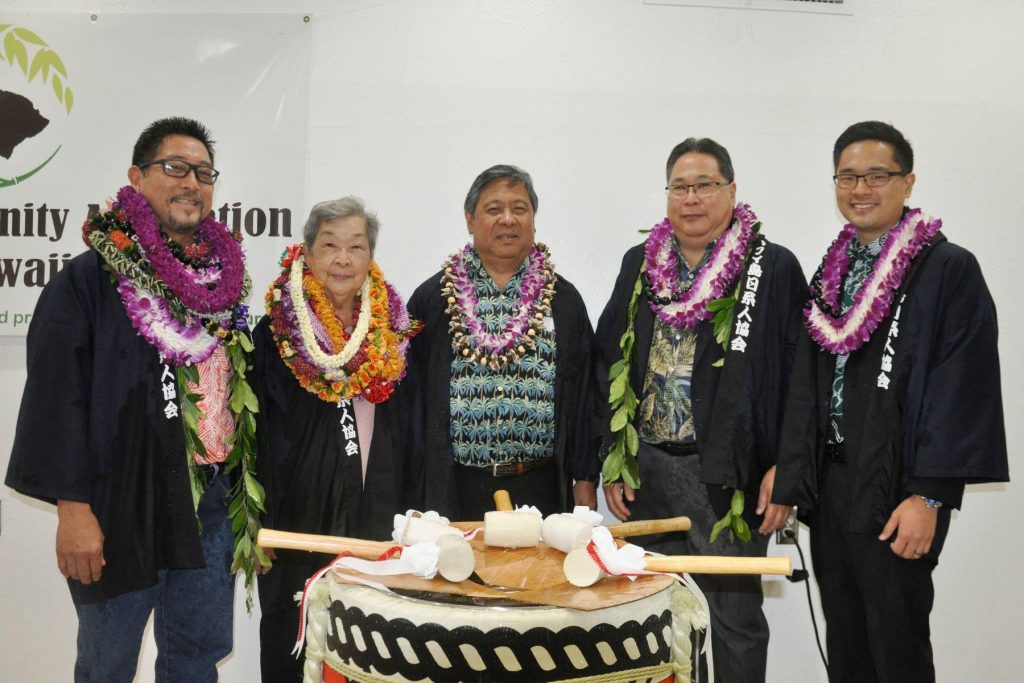 JCAH president Mike Miyahira and event co-chairs Roland and Jan Higashi presented the awards to the honorees. Carol Yamada Makino and her son Gareth accepted the award on behalf of Yamada Furniture, and Eric Inouye and Shinae Hirano accepted for Hirano Store.

A portion of the event’s proceeds were earmarked for the JCAH’s scholarship program. This year’s scholarship recipients, Mollie Green and Mayuko Yoshida, were also recognized. Each student received a $1,500 scholarship from JCAH.

The Japanese Community Association of Hawaii is a nonprofit organization whose mission is to promote and preserve Japanese culture. Its next major event, Bunka no Hi (Japanese Culture Day), will be held Nov. 16 at the Honpa Hongwanji Hilo Betsuin Sangha Hall with a mikoshi parade, Japanese displays, shichi-go-san dressing, food and entertainment.

For more information, call (808) 969-6437 or email jcahawaii@yahoo.com, or visit their webpage, www.jcahawaii.org.