“Put your hands into the soil, it’s good for your soul; you get back to where life begins,” said Renee Kimura, the fourth-generation owner and manager of Kimura Lauhala Shop in Kona. Here, the natural scent of the lauhala, enhanced by the warm Kona wind, welcomes visitors from near and far.

“Lau” means leaf in Hawaiian language and refers to the leaves of the “hala,” or Pandanus tree.

A walk through the lauhala shop takes you back to the old plantation days. Photographs of the Kimura ancestors hang on the walls. There are binders fat with articles and more photographs of the old days, along hundreds of hand-woven lauhala items from various artisans.

Renee learned to weave lauhala by watching her late grandmother, Tsuruyo Fujiwara Kimura. And because her grandmother was also a skilled seamstress with an innovative mind, she came up with the idea of lining lauhala baskets with fabric. The lauhala items traditionally woven by Hawaiians were more utilitarian. But when Tsuruyo started to add lining to the products, they became more fashionable — coin purses, eyeglass cases, handbags and clutches, bracelets, earrings and hair ornaments. Renee loved watching her grandmother work. With an image in her mind, she would measure, mark, pinch and hand-sew, and end up with a hat; also folding a round placemat — it must be perfect — to make a half-moon clutch purse. She even ordered bamboo handles from Japan to accent her lauhala tote bag design.

For the most part, Renee depends on other weavers to supply her with items. She spends more time running the business and less time weaving. She recently lost three of her hat weavers, so it’s been difficult to have enough hats in stock. She thinks she’ll need to step in soon and start weaving more hats.

To Renee, the items are more than physical products. “There are all these relationships in the different items, which [hold] the essence of what I, or we, created,” she said. “I still want to bring out more things of the past that reflect our heritage: my family and what they went through because you know they went through a lot of hardship related to lauhala.”

The seeds of the Kimura family’s legacy in Hawai‘i were planted in 1896 when Yoshimatsu Kimura migrated from Morino-mura, Oshima-gun, Yamaguchi-ken to Hilo. The expert carpenter came over on a two-year contract to help build bridges in Hilo. After his contract ended, he sent for his wife Tomo. She arrived with relatives, and they headed for Ka‘ü, where local people welcomed them and gave them a place to eat and sleep.

Yoshimatsu and Tomo took a ship to Kealakekua Bay in Kona and purchased the land on which Kimura Lauhala Shop stands today. The Kimuras started with a cotton farm while they grew their family of nine children. While Yoshimatsu worked as a farmer and carpenter, Tomo worked as a washwoman.

In 1914, they opened Y. Kimura Store — a general store known as Kimura Shoten. A short time later, they added coffee and cattle to the farm. Yoshimatsu also used his carpentry skills to build homes.

Hawaiians came to Kimura Shoten to trade their handmade lauhala items. Lauhala mats, baskets and hats were bartered for goods such as food, clothing, candy, shoes, lanterns, kerosene blankets and anything else that filled the needs of people who lived in the area.

When the Kimura children grew older, they found work outside of the farm to further support the family. Their second son — and Renee’s grandfather — Torao, helped by driving the family truck from house-to-house, delivering goods and sometimes bartering them for lauhala hats for the store.

During the Depression years in the 1930s, Torao’s wife, Tsuruyo, and other Japanese “coffee wives” learned to weave lauhala from Hawaiian women. By weaving together, the women became sisters and they accumulated more lauhala products to sell at Y. Kimura Store. That helped them to supplement their income — it was a win-win situation.

Renee was born when her family was mainly farming coffee. As a child, she thought they were very poor because when there was a school break, she and her family had to pick coffee while her classmates got to enjoy their vacation. Reflecting on those times, she is grateful to her great-grandparents, who she said were innovative, wise and hardworking.

Laboring in the coffee fields was hard and dangerous. It wasn’t unusual for a baby to be brought into the coffee fields in a basket. As soon as the children could walk, they were given baskets to fill with coffee beans. Renee remembered being a young girl managing a ladder, pulling branches with a hook and a filling her basket with coffee beans. It was hard work back then, but she smiled when she spoke about the feeling of peace she felt among the coffee trees and the sense of accomplishment she got when she finished picking beans from a row of coffee trees.

One day, she noticed cotton trees at the edge of their coffee farm and asked her grandma, “How come we have cotton?” That’s when she learned about the old cotton farm that existed before she was born.

During the years of World War II, lauhala items became popular for military personnel to send home as gifts. That led to Kimura Shoten changing to the Kimura Lauhala Shop in the late ’50s. Tsuruyo operated the shop until the early 1990s when her daughters Alfreida (Renee’s mother, who passed away in 2017) and Ella took over after their retirement. Alfreida, who had retired from Hawaiian Airlines, managed the business operations; and Ella, a retired teacher, made lei to adorn the lauhala päpale (hats). Aunty Ella still enjoys taking care of the gardens surrounding the shop.

In an interview with Ke Ola magazine in 2015, Alfreida shared her memories of how her mother knew the different varieties of hala, or Pandanus trees. Tsuruyo would pick, boil, clean and strip the leaves. Then she would bundle them, 50 leaves at a time, and preserve them in a sulfur box to keep the bugs out. Alfreida and her five siblings were busy before and after school, preparing the leaves for weaving. In the story, she said, “My brothers, Morris, Walter and Clinton carried the heavy lauhala bundles from the front porch to the coffee platforms for drying. The bundles were so heavy. We girls did a lot of work too, but the boys did the heavy labor.” 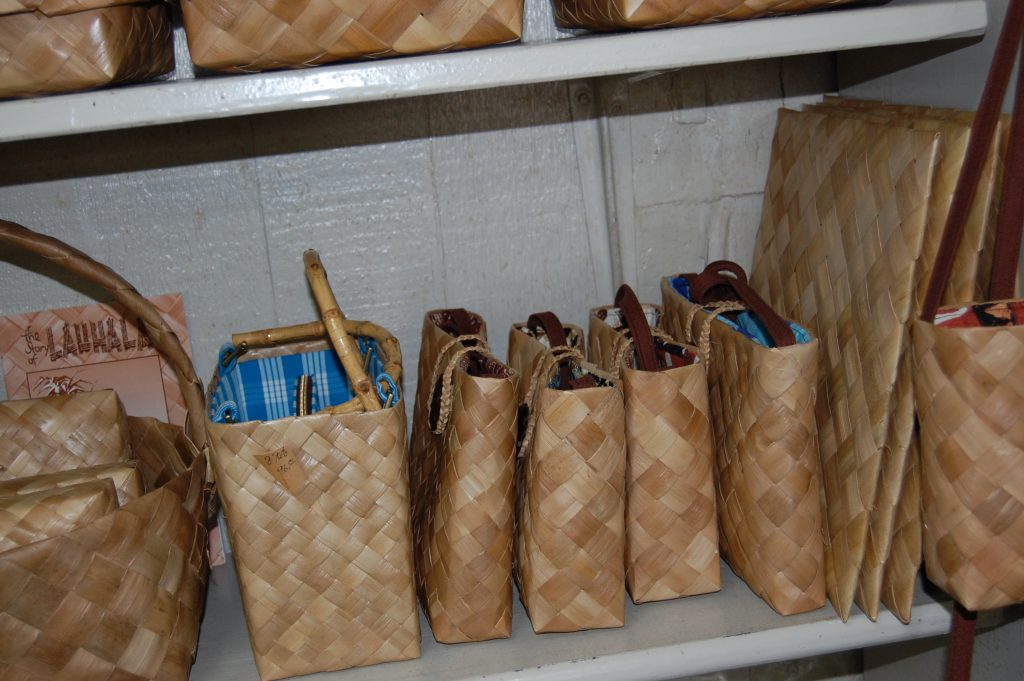 As for the hala tree, it’s good to have lots of air and sun going through the leaves. Renee was also taught to not throw away any leaves; unused leaves should go back to the land, preferably under the hala tree. If the trees are well aerated, it’s easier to see which new leaves have fallen to the ground. The leaves are rolled into kuka‘a (a roll of leaves) and kept until the weaver is ready to weave.

A century after Yoshimatsu’s and Tomo’s arrival, Kona is still a tight-knit community. The craft of lauhala and the traditional values of both the Japanese and Hawaiian cultures are preserved today because of the relationships the shop maintains with the community and shares with visitors.

Kimura Lauhala Shop is still an important part of Kona’s culturally rich community known for its many art galleries and estate-grown coffee. Some of the state’s legendary lauhala weavers come from Kona, including the late Elizabeth Maluihi Lee, the late Gladys Kukana Grace, the late Josephine Fergerstrom and Art Murata, who is still an active lauhala weaver. Renee is grateful to all the kumu (teachers) who have inspired and taught her to continue the lauhala heritage.

The number of craftspeople that produce lauhala items for the shop used to be as many as 25 to 30. Today it’s down to about 10, but even that number fluctuates. Heritage is important to Renee, and she thinks it might be nice to tell the Kimura story by showing artifacts such as old tools and sewing machines in the shop, kind of like a museum. There are already binders full of articles and photos for visitors to view and more on the walls and at the entrance to the shop.

It’s hard to say how Renee Kimura will weave her way into the future. But there are some things that have consistently been carried through by the Kimura women over the last 105 years that Renee clearly carries in her DNA — foresight, innovation, grit and aloha for humanity.