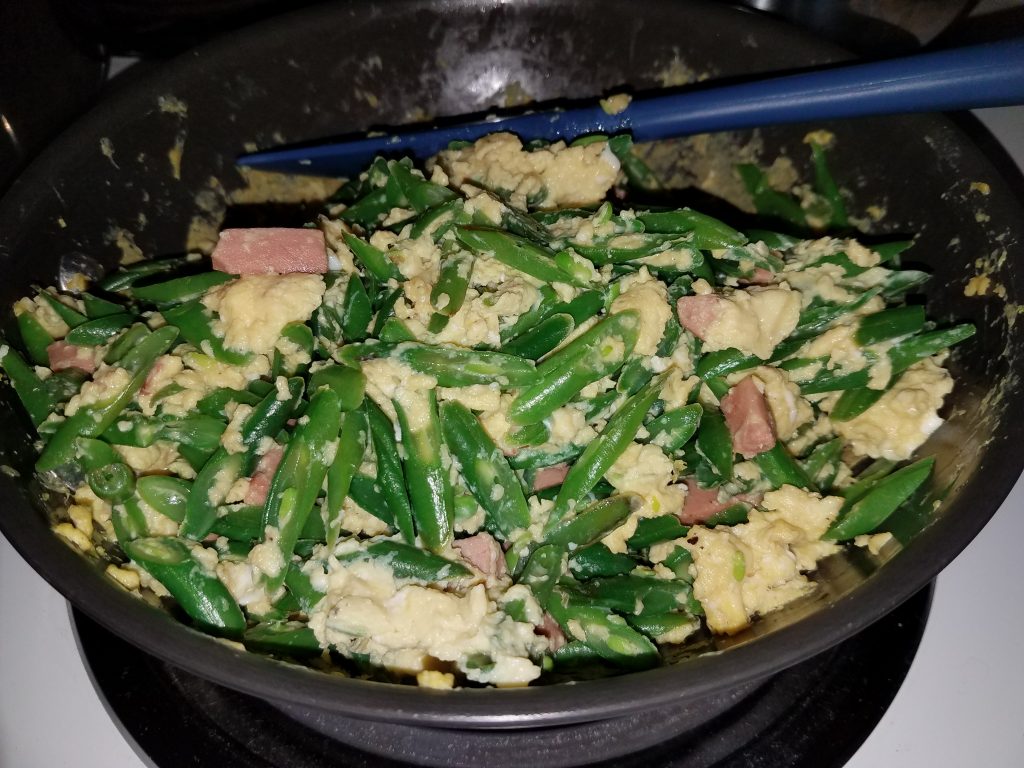 Sausage. It’s the meat of summer picnics and the national symbol of a great baseball game. The savory, encased meat was also a favorite food of the late celebrity chef Anthony Bourdain, host of the television food series “Anthony Bourdain: Parts Unknown,” who died a year ago.

Vienna sausage was my first experience with meat in tubed form. It came in a bright yellow can and could be found on every grocery store shelf. Those cans of sausage, perfectly packed in broth, hardly resemble the authentic Vienna sausage, which is made with pork and beef, encased in sheep’s intestine and lightly smoked. What everyone in the 50th grew up eating is made from chicken, pork and beef without any casing material. It’s purchased in such large quantities here that when Libby’s changed the paper label from yellow to blue, sales dropped. Local folks bypassed the blue-labeled cans, thinking they were an alternate brand, or worse, generic Vienna sausage. That’s why Libby’s brought back the original yellow label.

Like most islanders, I was “addicted” to those miniature meat by-product sausages. Whenever Mom asked me what I wanted for my birthday dinner, I asked for Vienna sausage (quartered lengthwise) cooked with sliced green beans and scrambled eggs. Mom could whip this up in no time, but she told me that it really wasn’t a suitable “birthday meal” and that I should pick something “fancier” for my special birthday dinner.

Although I’ve cut back considerably on eating Vienna sausage — and its canned cousins, corned beef and Spam — I still enjoy other types of sausages.

Dried sausages are either partially dried, as in summer sausages like Hickory Farms or Goteborg, or hard and dried ones like salami and pepperoni. Neither requires refrigeration until you open it up and slice it. If you don’t refrigerate it after exposing that cut end, you will begin to see various colors of mold propagating.

The partially dried variety is usually presliced and can be eaten without any additional preparation. In college, I enjoyed the Hickory Farms summer sausages that Mom bought at those pop-up Hickory Farms kiosks at the mall. I was starting my budding sommelier career by pairing the sausage with Blue Nun Liebfraumilch Riesling, which now makes a lot of sense. The acid and sweetness in the wine paired perfectly with the salty and fatty qualities of the summer sausage. Going back to the old world, what did Germans eat? Sausages! And what wine did they drink? Riesling!

I’m told that Kaua‘i folks slice their Goteborg and pan fry it until the edges turn up forming a “cup.” They then fill their Goteborg cup with a scoop of rice and sprinkle some furikake on top for the perfect Goteborg musubi!

Dried sausages are your basic whole salami and pepperoni, which can be bought presliced. I prefer to slice my own, so I buy the whole tubed variety covered with white mold. I use lightly thicker slices for pizza and thinner ones to eat as is. Don’t worry about that white mold covering — it’s the reason the salami or pepperoni dries. The mold removes excess moisture and prolongs the shelf life of the sausage. 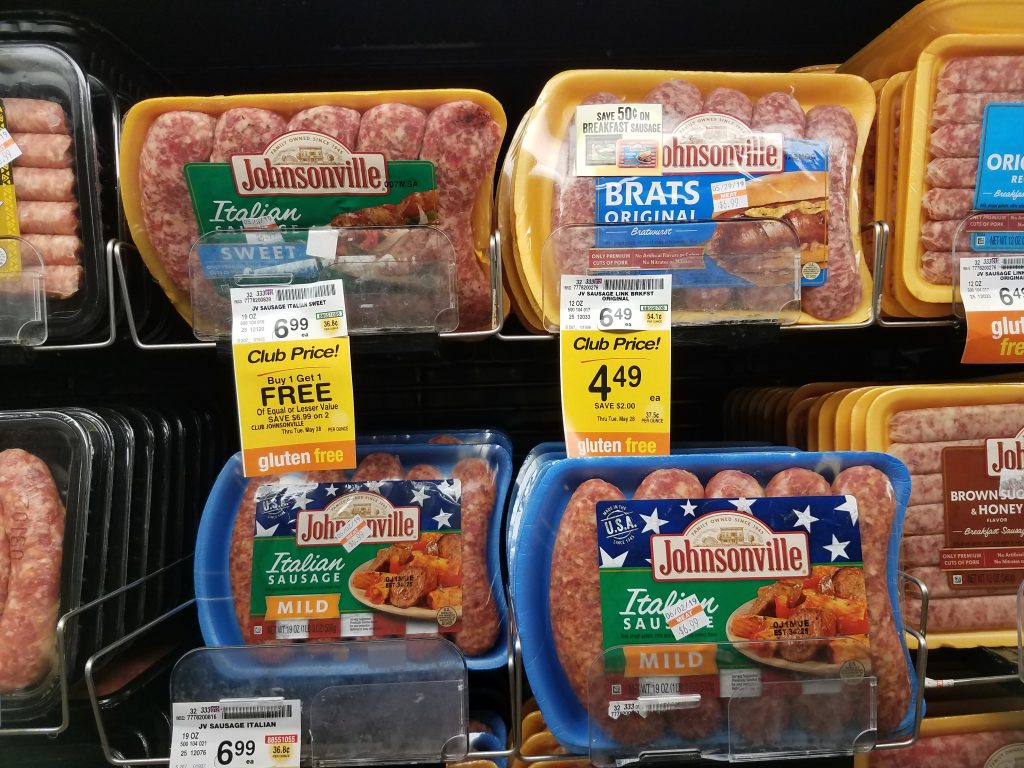 Fully cooked sausages are usually available in your neighborhood supermarket. The most basic variety is your standard hotdog, or wiener. The Tatsumotos used to eat hotdogs only in red casing, probably because Mom grew up eating Maui hotdogs that used natural casings and red food coloring. As a child, I enjoyed the Oscar Meyer hotdogs served at my friends’ houses because it had a softer bite, probably because it didn’t have the natural casing.

Mom never liked the anemic color of the Oscar Meyer wiener. I never understood why because we ate our fair share of Vienna sausage, which looked just like mini Oscar Meyer hotdogs. If Mom knew that the natural casing in Maui hotdogs came from an animal’s (usually pork) intestinal lining, she would have immediately switched to Oscar Meyer. I still enjoyed Maui hotdogs, especially the way Auntie K prepared them for breakfast during our annual Maui vacation. She sautéed them with Maui onions. After a day of fishing, we enjoyed the breakfast leftovers with Uncle Ogi’s homemade chili pepper water.

Other sausages available in supermarkets include bratwurst, knockwurst, bockwurst, Italian sausage and English bangers. Gourmet varieties such as chicken and apple sausage and Andouille are usually stocked in the same deli section as Hawai‘i’s own Portuguese sausage, or linguica. Since they’re already fully cooked, they just need to be reheated on the stovetop or on a grill. 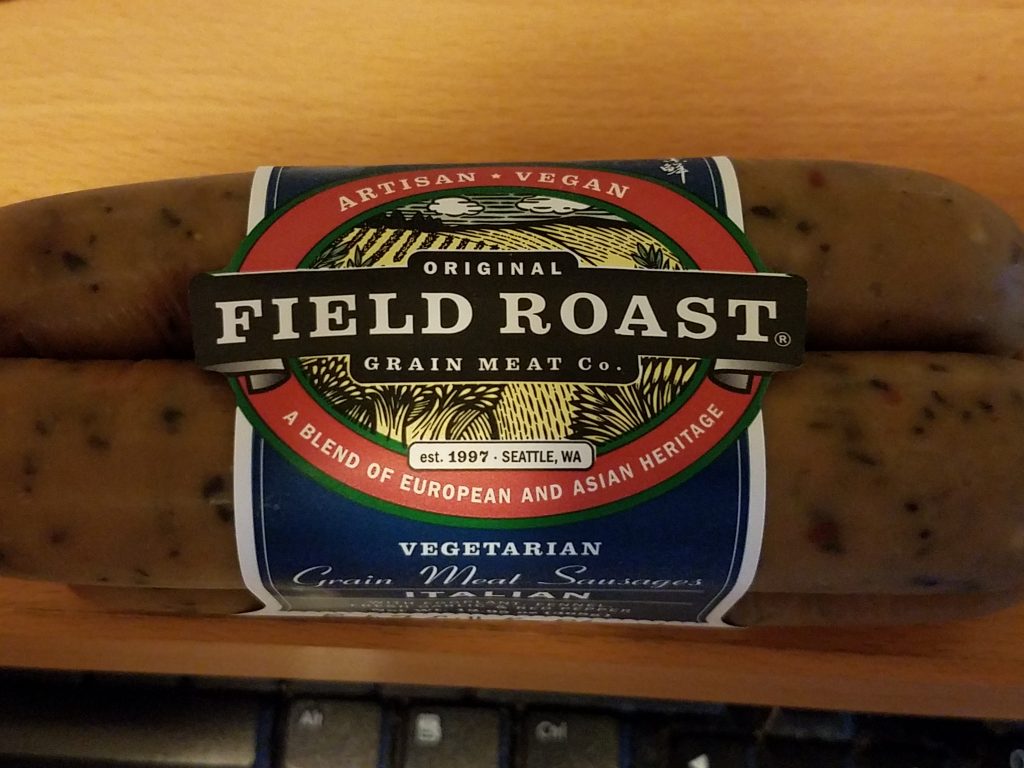 You can also find fresh, uncooked Italian sausage in both sweet and spicy varieties, bratwurst and local longanisa in most supermarkets. These are my favorite tubed meats because you can cook them exactly as you want. I find that fresh bratwurst slowly poached in beer with sliced onions, coarsely cracked black pepper and a couple of bay leaves creates the juiciest sausage, and you now have a lightly flavored bratwurst broth for other dishes.

For Italian sausage, remove the meat from the casing and then brown and crumble the sausage for the perfect Bolognese (red Italian meat sauce). I “borrowed” this idea from Chef Keith Endo of Vino. Chef adds garlic, roasted red peppers, fresh basil and chopped tomatoes for Vino’s Bolognese.

I also crumble and brown the uncased Italian sausage with sliced garlic, rapini (also known broccoli rabe) and grated Parmigiano-Reggiano cheese and toss them with cooked orecchiette, or ear-shaped pasta, and chili flakes for the traditional orecchiette with rapini.

If you’re a bit more adventurous, stop by Butcher & Bird in Kaka‘ako and pick up the house-made and -cured fresh sausages. Butcher & Bird usually stocks at least two or three varieties that you probably won’t find at your local supermarket.

I hope to start making my own tubed meats. Manual and electric meat grinders with attachments to create your own sausages are readily available, and you can even find real animal casings for your tubed meat creations. If you’re squeamish about using animal casings, artificial casings are also available. But if that’s more work than you want to do, you can skip the whole casing process and simply make your own sausage patties.

Of course, if that’s just too much work for you, just pop open that yellow can, slice up some green beans and crack a couple of eggs. Mmmm . . . good!