“Okinawa is such a beautiful place, not just the ocean and scenery and culture, but the people. I’ve been treated well and taken care of by many people here in what has become ‘My Hawai‘i.’” –– Colin Sewake

The tradition of proudly receiving your diploma in a cap and gown to the tune of “Pomp and Circumstance” is pretty much a given at any high school or college graduation ceremony in the United States.

It was no different in the ’80s when I attended Leilehua High School in Wahiawä, Hawai‘i. As a student member of the school band, I played the time-honored “Pomp and Circumstance” on either the alto saxophone or the bass clarinet. Each year, we sent off graduating seniors at the annual ceremony, until it was my turn to graduate from high school in 1989.

This past March, I witnessed a different tradition when our son, Yoshiaki, “Aki” for short, graduated from Yomitan High School. There was no “Pomp and Circumstance,” but he still marched into the taikukan (gym) with 316 of his classmates as the Yomitan school song was played.

My wife, Keiko, woke up early to take Aki to school to go over last-minute ceremony details with his classmates.

He came back home and got ready. Then we headed back out to the school and parked up the street at a community park about a quarter mile away. We walked down the hill and made our way to the taikukan. The school’s younger students greeted us and assisted with various duties, which included handing out plastic bags to put our shoes in since footwear is removed when entering the gym.

Once we entered the gym, we received the ceremony program. Then a sign immediately caught my attention. It read “Yomitan” in Japanese kanji characters and “Victory” in English. Coincidentally I named Aki “Lanakila” which means “victory,” just like my name, “Colin,” in the Celtic language. Our daughter, Mizuki, was named “Maile” to honor my dad, the late Richard Sewake, who grew the Hawaiian maile vine in his backyard.  He would sell seedlings and make maile lei on special occasions.

Since my brothers and I are part-Hawaiian, we always complained to our mom because we weren’t given Hawaiian names. To this day, we still give her a hard time about it. Therefore, I gave Aki and Mizuki Hawaiian names to acknowledge their Hawaiian ancestry. 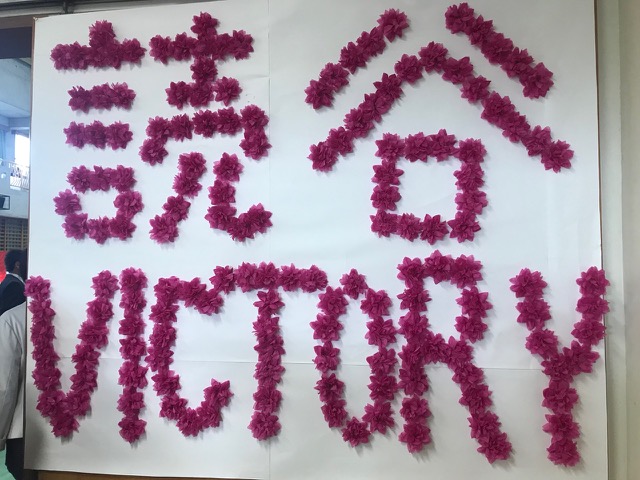 After entering the taikukan, Keiko and I took our seats. I tried to remain still in my suit and necktie, which had become a little kitsui (tight) in recent years. I wished the ceremony were held in Hawai‘i, where I could be comfortable in an aloha shirt. Here, the majority of dads wore suits and the moms wore skirt or pant suits. In Okinawa, they also have kariyushi wear, which is the equivalent of an aloha shirt. But that is probably more appropriate in the summer months and the weather in March is still a little on the cool side. 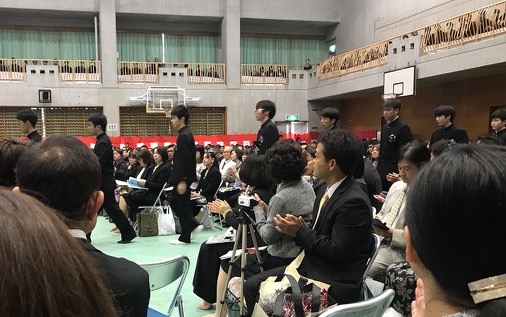 Soon, the graduating students started to march in. Each class had about 40 students, and Aki was in Class No. 7, or nanakumi, of the eight classes. Once the students took their places, the ceremony started off with the Japanese national anthem, “Kimigayo,” followed by the Yomitan High School song. The school’s köchö sensei (principal) gave his speech before the 317 students. One by one, the students went on stage to receive their graduation certificates as their names were called. The kyöikuchö (superintendent) and PTA (parent and teacher association) kaichö (president) read their speeches after that.

As I sat through the typical Japanese ceremony program marked by numerous long speeches, I amused myself by checking my iPhone for e-mails, text messages and new posts from Facebook friends. Then I received a text from fellow Leilehua High School alumnus Chase Takenaka (Class of 2014), who was asking me where I was. He recently moved to Yomitan and is now working as an assistant language teacher under the Japanese Exchange and Teaching program.

I got up in the middle of the program to meet Chase outside. It’s neat to have a fellow Leileihua High School Mighty Mule in Yomitan, the village I consider to be the “Wahiawä of Okinawa.” There is a similar countryside feeling with satökibibatake sugar cane fields all around.

After the ceremony, the students counted down from 10 to one in Japanese. Then a big gold ball suspended from the ceiling opened up and out came a shower of confetti and streamers with a banner reading “Sotsugyö Omedetou” (Graduation Congratulations).

After Keiko and I exited the taikukan, we followed the rest of the parents and family members to the parking lot and school entrance area to await the graduates. As I walked down the ramp, I ran into Yomitan Hanaui Weaving Museum director Hiroko Matayoshi, who also attended the ceremony to see her mago (grandchild) graduate.

As I ran into more familiar faces, the feeling of “community” started to hit me. The parents in the Yomitan community had a common bond. Our kids attended the same schools, the Kobato Yöchien (Kobato Preschool) and Tokeshi Shogakko (Tokeshi Elementary School). They grew up together after Keiko and I moved in May 1999 from Miyagi in Chatan to Nagahama in Yomitan.

I reflected upon all the different school and community events that I had attended with these parents and students over the past 20 years or so.

The graduates eventually made their way out and parents and other family members presented them with candy lei, flowers, balloons and gifts. Giving lei and other gifts reminded me of Hawai‘i, which I don’t believe is a tradition in mainland Japan. I couldn’t help but feel a bit closer to my original island home. 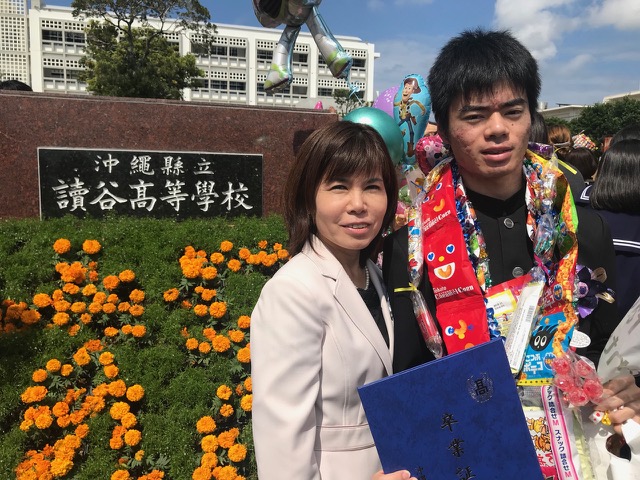 Although Aki doesn’t like to take pictures, I asked him to do his proud mom and dad a favor by standing by Yomitan High School’s entrance sign so I could take a couple of photos. Then we left the school grounds, walked back to the van and looked for a place to eat lunch. Many restaurants were already booked. On our third attempt, we finally found a restaurant located along the road leading to Zanpa Misaki (Cape Zanpa).

After all the long hours of studying at Yomitan High School and juku cram school, it’s time to relax. But not for long, because the next order of business is for Aki to attend driver’s education classes while awaiting university entrance examination results.

Colin Sewake is a keiki o ka ‘äina from Wahiawä, O‘ahu, who was assigned to Kadena Air Base in Okinawa in December 1994 to fulfill his U.S. Air Force ROTC commitment. He met his future wife, Keiko, within a month and decided to make Okinawa his permanent home. Colin retired from the Air Force and, recently from the Air Force Reserves. He now works as a customer service representative for Hotel Sun Palace Kyuyokan in Naha. Colin and Keiko have two children and make their home in Yomitan.