Almost every day at about 11 a.m., The Hawai‘i Herald team — all three of us — gathers around editor Karleen Chinen’s desk so advertising manager Grant Murata can make us “karaboshi krakkah.”

The “karaboshi krakkah” is a Diamond Bakery Saloon Pilot cracker. Murata spreads his peanut butter and honey mixture on the hard cracker. He said he learned how to make the mixture from Tsuru Sakihara, an issei woman he knew as “Chiru-Obasan” — they were members of an Okinawan dance club. Chiru-Obasan taught him about the old plantation snack.

Murata explained that local prisoners were given the hard, round karaboshi cracker to eat. “Karaboshi” was their Pidgin word for calaboose, or jail. This is just one example of how Hawai‘i’s Pidgin English reflects the Islands’ plantation history.

The future of Pidgin was the subject of a May 21 “talk story” sponsored by Zócalo and the Daniel K. Inouye Institute titled, “Will Pidgin Survive the 21st Century?”

A full house turned out for the event at Artistry Honolulu in Kaka‘ako. Noe Tanigawa, arts and culture reporter for Hawai‘i Public Radio, was the panel’s moderator. The panel members were: California-based sociolinguist Sara Roberts; former Gov. John D. Waihe‘e III; Katie Drager, co-director of The Charlene Junko Sato Center for Pidgin, Creole, and Dialect Studies at the University of Hawai‘i at Mänoa; and comedian Andy Bumatai, who has a YouTube series called “Daily Pidgin.”

Tanigawa started the discussion by asking Roberts about the history of Pidgin English. Roberts said the earliest text she could find that was recognizably Pidgin was from 1791. There are two main varieties of Pidgin. One variety is rooted in Hawaiian language, and the other in English. They coexisted for much of the 19th century.

The Pidgin rooted in the Hawaiian language took off at the same time as the sugar plantations, after 1876. After the overthrow of the Hawaiian monarchy in 1893, English became the dominant language, creating a Pidgin language based in English.

Waihe‘e, who grew up in the sugar plantation town of Honoka‘a on the Big Island, said, “Pidgin is not just about vocabulary.” He talked about how it is used to express culture and indicate some kind of value. “That, coupled with enunciation, was important. The sound of the word would indicate if someone knew Pidgin or not,” said Waihe‘e.

As an example, Waihe‘e said, “Some mo’ bettah,” meaning, “a little bit less mo’ bettah, [or] saying modestly something that is enormous … It’s the value of humility that came from Japanese culture.” Waihe‘e said the late U.S. Sen. Daniel K. Inouye was a master of doing that.

Waihe‘e recalled hearing a speech by Inouye, who spoke “perfect English,” he said. Inouye was speaking about being shipped off to training camp, and his father said, “Don’t make me shame.” In Inouye’s speech, Waihe‘e also heard him say, “ . . . and yet, when it was all pau, I think I made my father proud.”

He said that anyone who was raised in Hawai‘i grew up with the idea of “No make ‘A.’” It was a value system accepted by all groups, Waihe‘e said, adding that Inouye couldn’t say, “I know I made my father proud,” because he might be told, “No get big head!” Each ethnicity contributed its own value system to society which is reflected in the Pidgin Language. This represents a sense of commonality and localism.

Andy Bumatai said Hawaiian language has changed for the better in recent years because young people are being taught to honor the ‘okina and kahakö. Bumatai grew up saying he was from “Waianae,” (pronounced “why-nye”) blending all of its syllables. Today, more local people pronounce it as “Why-a-nye” (Wai‘anae).

Bumatai grew up in San Francisco. He said he heard his father, who was in the military, speak Pidgin with his friends. He thought they were speaking “some kind of weird baby talk,” until he moved to Hawai‘i in the fourth grade. Then he realized that “the whole state talks like that!”

He said Pidgin is sometimes used as an identifier. “When you go to Starbucks on the Mainland, you don’t know if [the barista] is local or Mexican. So you throw out small kine Pidgin to see if he bite,” said Bumatai.

Tanigawa asked whether there are decisions that need to be made to keep Pidgin culture alive.

That’s not the way it works, Bumatai answered. “I don’t think we can. It’s a cultural thing that naturally evolves.”

Roberts agreed. “A language that doesn’t change is a dead language.” As society evolves, so does its language. Old words being replaced by new ones — that is the definition of a thriving language.

Kealoha Wong, the first poet laureate of Hawai‘i, was spotted in the audience. He sat down with The Hawai‘i Herald after the event and shared some of his reactions to the discussion.

Wong said there were a lot of “good insights” presented at the event. He also observed “the influences of pop culture coming into the way kids are speaking.” As Waihe‘e said, people are speaking better English overall and using more acronyms, like “L.O.L” –– laugh out loud.

When asked about the importance of Pidgin in his slam poetry and storytelling performances, Wong said, “I speak [Pidgin] from an era I grew up in. It’s a living, breathing language.” He said he needs to now incorporate the correct pronunciation of Hawaiian words, which he didn’t do in Pidgin conversations growing up, as was discussed by the panelists.

This past March, Wong capped off a successful national tour of his show entitled “The Story of Everything” with a sold-out event at the Hawai‘i Theatre.

We have come a long way since the days of English standard schools and Pidgin in the classroom being frowned upon. Pidgin is now an academic topic and a field of study. In 2002, The Charlene Junko Sato Center for Pidgin, Creole, and Dialect Studies was established at UH. Drager, its co-director, said students in Hawai‘i can even submit papers in Pidgin. Roberts said UH Hilo professors use textbooks that utilize Pidgin to teach Hawaiian language to students. She said, “thinking in pidgin” rather than in standard English makes it easier for many students to learn Hawaiian.

This “talk story” was just a sample of the many aspects of Pidgin that can be discussed. For example, each island in the state of Hawai‘i has its own Pidgin as does each ethnicity with roots in the plantation. In her book, “A Harvest of Hawaii Plantation Pidgin: The Japanese Way,” Myra Sachiko Ikeda focuses on the use of Pidgin in Japanese communities on the Hawai‘i Island sugar plantations.

In the book’s preface, Ikeda wrote, “differences were not simply just accepted but overcome. Overcoming these differences was instrumental toward forging the bonds among the various ethnic groups who lived on the plantations. From these bonds was born a common understood language which was critical for without it plantation work could not be accomplished.” Japanese, like other ethnic groups, had to assimilate in their lifestyles and cultures.

So, when you hear “jan ken po,” (rock, paper, scissors game) “chawan cut,” (rice bowl haircut) “bocha,” (to bathe) or any other word or phrase from the hanabata days, there is a sense of “We grew up in Hawai‘i.” And while Hawai‘i’s Pidgin is always evolving, it will always bond us and help us recall fond memories of our jiji and baban (grandfathers and grandmothers) or bring comfort when we meet another Hawai‘i person in a faraway land. A language created to overcome differences — this is the beauty of Pidgin and creole languages of the world. So nevamine talking stink about “da kine.” 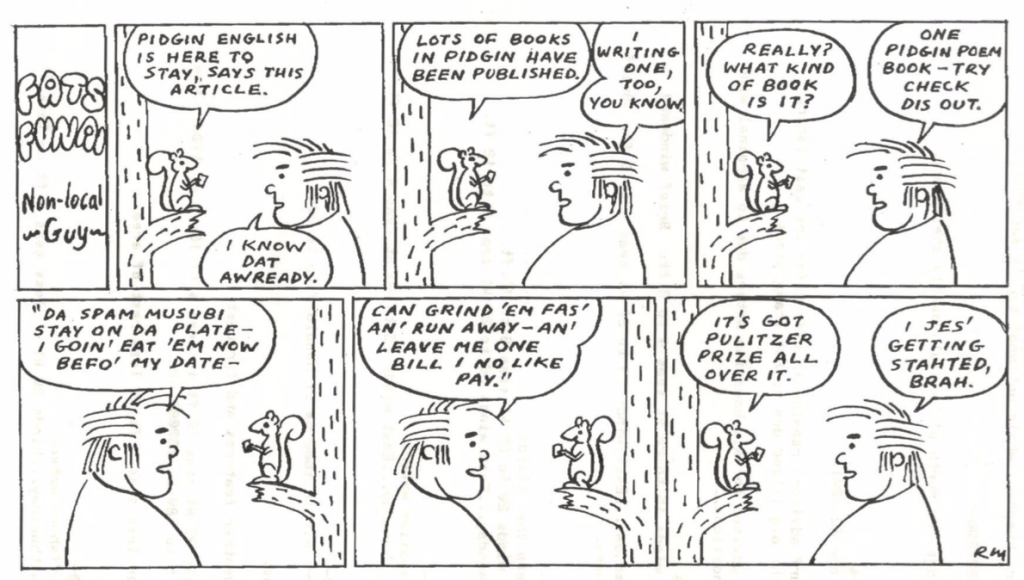