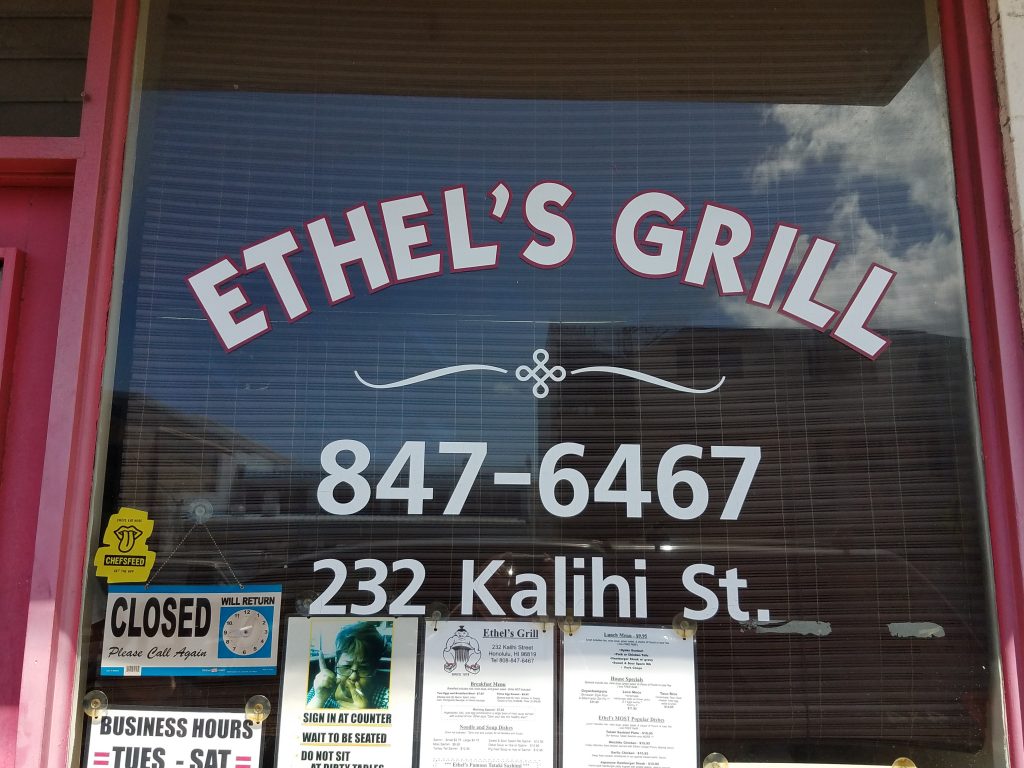 It’s not really a secret club. It’s just dinners arranged by Grant Shindo –– also known as “Chuggy Bear” –– who started the venture with his business partner, Thomas Obungen. They had planned on opening a restaurant consulting business called Slug Media. As more and more friends asked to join, Slug Media morphed into a group that began organizing dinners as “Chuggy’s Super Secret Supper Club.” It isn’t an exclusive club — all you have to do is add your name and contact info to the Slug Media email list to be notified of future events. 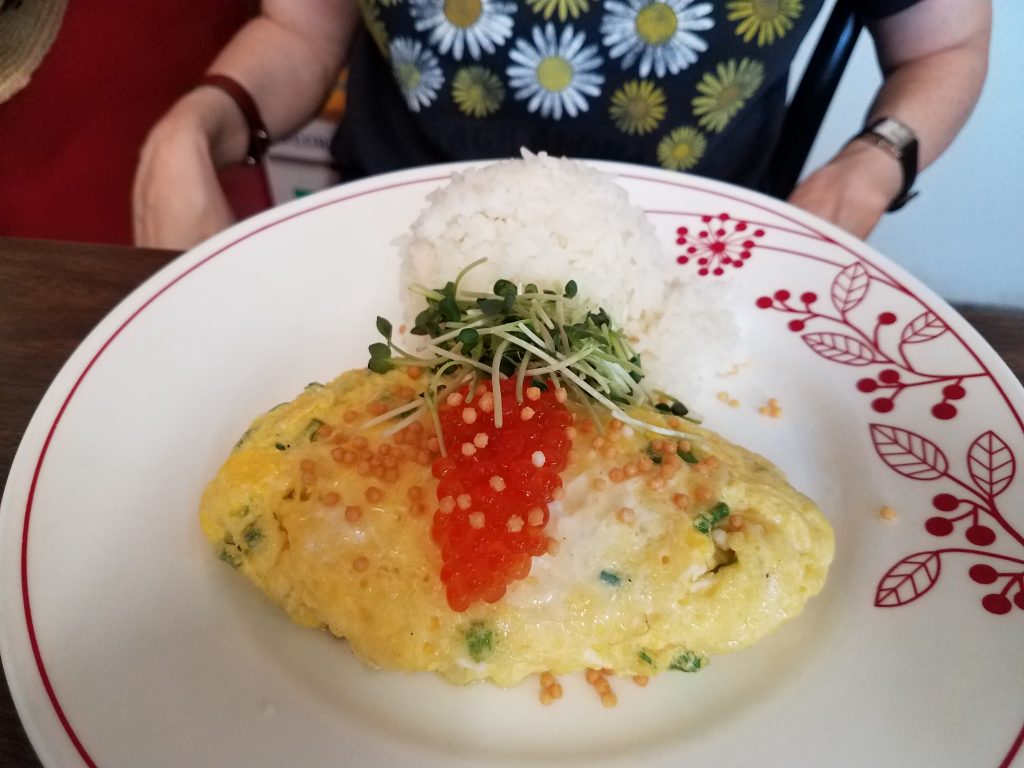 One of the club’s goals is to improve the bottom line for restaurants, thus most of the dinners are held on Mondays, Tuesdays or Wednesdays — the three days of the week when most restaurants have a hard time filling their tables. The Mrs. and I would love to enjoy a good meal and help them out, but we both work in Wahiawä and there’s no way we can make it in time for a dinner reservation in downtown Honolulu, or worse, Waikïkï, by 6 o’clock. So, we never attended any of the dinners . . . until recently, when the “Supper Club” became a “Brunch Club” on a Sunday.

The operators of Ethel’s Grill in Kalihi had always wanted to cook up a brunch, so as part of Slug Media’s “Super Secret Supper Club,” they decided to open on a Sunday for brunch and make it a special event, as they are normally closed on Sundays. 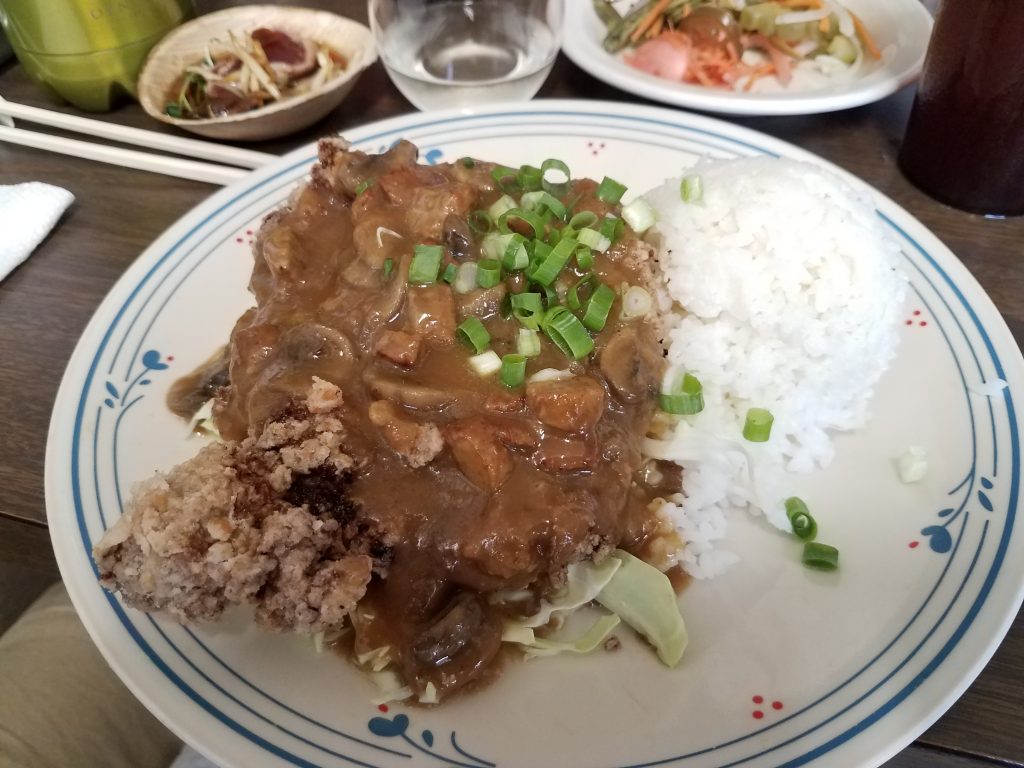 First, a little bit about Ethel’s.

In 1978, a few years after arriving in Hawai‘i, Ryoko Ishii from Okinawa and her husband Yoichi, originally from Tökyö, purchased a small, hole-in-the-wall diner called Ethel’s Grill in Kalihi’s industrial district. These days, their daughter, Minaka Ishii Urquidi, and her husband, Robert Urquidi, run the restaurant.

For the past 40 years, Ethel’s Grill has been a popular eatery for locals and tourists alike. They were even featured in food celeb Anthony Bourdain’s popular television series, “Parts Unknown,” in 2015. Bourdain discussed local culture with chefs Andrew Le of The Pig and the Lady and Mark “Gooch” Noguchi of the Pili Group while enjoying some of Ethel’s classic dishes, like pigs feet soup, tripe stew, mochiko chicken, taco rice, bittermelon with Spam and Japanese hamburger steak.

Although Ethel’s Grill has been a Honolulu mainstay for decades, the Mrs. and I had never been there. The food has always had a good reputation, but the restaurant is located in the heart of industrial Kalihi, makai of Nimitz Highway, and is open only Tuesdays through Saturdays from 8 a.m. until 2:30 p.m. Good luck finding parking on those days and at those hours. Even if you’re lucky enough to find a legal parking space, you might not be able to get table, or you’ll have to wait for a table to open up. You see, Ethel’s only has room for 23 people, max, and they don’t take reservations. Neither do they accept credit cards or checks — it’s cash only for your meal.

And then, hallelujah! The Sunday Brunch Club gave us the opportunity we had been waiting for, with reasonable street parking a few blocks away. Because seating is prepaid, we had a reserved table.

For $41, tax and tip included, the meal started with house-made pickles that included: spicy baby turnips, shichimi (a chili)-spiced bittermelon and warabi (fiddlehead ferns) with onions. Next out of the kitchen was a green salad with Ethel’s famous parsley dressing, followed by miso soup and then a small portion of their famous ahi tataki (seared ahi) on bean sprouts with that garlic, ponzu and sesame sauce. I think they should bottle that sauce and sell it.

Diners then had their choice of several entrees, which included:

• Misoyaki Salmon with Lomi Tomatoes; and

But then my guardian chef angel hopped on my shoulder and whispered in my ear: “You can make misoyaki salmon at home and cook your own sunny side eggs.” That’s true. “And it’s so mendokusai (a pain) taking out that cast iron skillet, tenderizing a slab of breakfast steak, then pan frying it.” Also true.

So, I ordered the Country Fried Steak, which was nice and tender with a light, flaky crust and rich brown gravy. I almost couldn’t finish it, but I powered out and stretched my stomach just a wee bit more.

The Mrs. had an easier time making her choice. She usually avoids all fried foods, except french fries, so she ruled out the mochiko chicken (even if it’s another of Ethel’s specialties) and the Mortadella katsu, which was humungous! She ordered the Crab and Boursin Omelet, which was as good as omelets get. At first she thought the cheese might overwhelm the flavor of the crab, but it actually highlighted the crab flavor and gave the omelet a fluffier quality with the ikura, which added an element of salt to cut through the rich flavors. The Mrs. had no problem finishing her entrée.

The meal concluded with their Haupia Pudding with Chocolate Chip Matcha Granola and Pineapple Compote. It didn’t sound very appetizing when I first read the description. I should have known better — you see, Minaka met her husband Robert when they both worked at Sam Choy’s Restaurant, where she specialized in creating desserts.

When I took my first bite, that underlying piquant bitterness from the matcha and chocolate balanced the rich flavor of coconut in the haupia pudding. The granola gave an opposing textural sensation, while the caramelized sweet and sour flavors of the pineapple perfectly balanced the haupia the way pineapple and coconut blend in a perfect pina colada. The Mrs. boldly stepped up to the plate to finish my leftover dessert.

To be notified of future “Super Secret Supper Club” events, add your email address to the Slug Media list: https://www.slug.media/contact.

No reservations, cash only