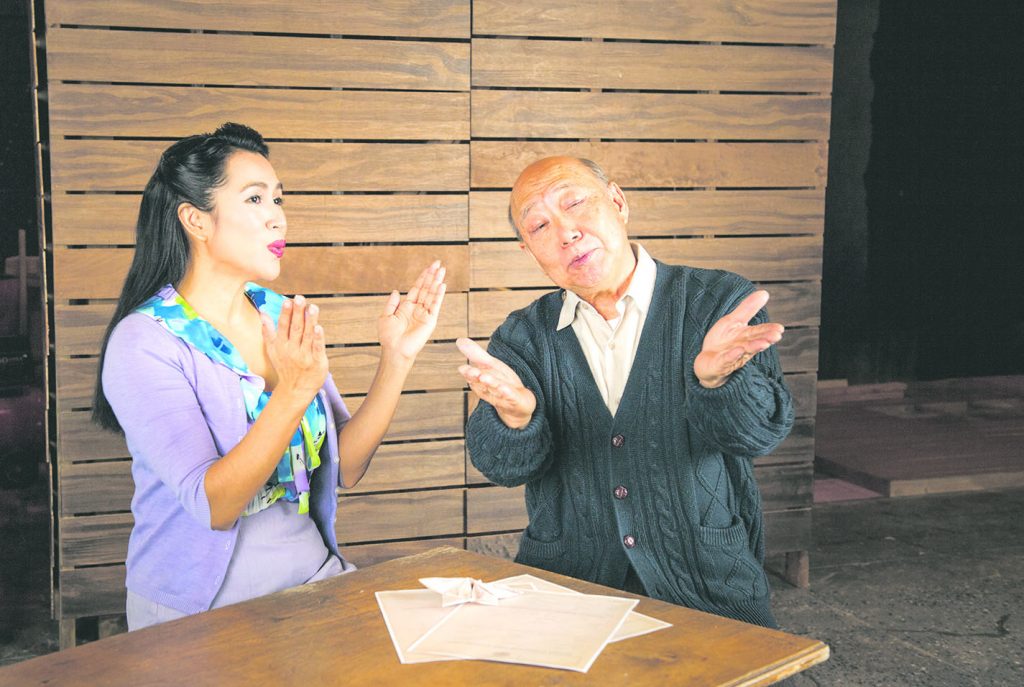 Because I am a writer for The Hawai‘i Herald and an Okinawan performing artist, people might think that I’m the type of mother who forces my two sons, 14-year-old Gavin and 12-year-old Cameron, to attend or participate in Japanese and Okinawan cultural activities. Actually, I rarely do. I try to encourage them to find their own path in life. While I enjoy playing 300-year-old Okinawan music that my boys say sounds like “tortured animals,” Gavin says he would “rather play music people actually want to listen to.” How rude!

There are occasions, however, when I feel it would be beneficial for them to learn about their ancestral roots and Asian American heritage, despite their monkutare moans and groans.

Taking the boys to see Manoa Valley Theatre’s production of “Allegiance” during its March 28 to April 7 run at Hawaii Theatre was one of those times. It was an important story that I felt my boys needed to see, hear and experience.

After the expected round of, “But I hate musicals,” and “Why can’t I wear slippers?” off we went to the theatre.

The Kimura family in “Allegiance” wasn’t so different from our own, especially the characters Sammy Kimura (played by Ethan Le Phong) and his sister Kei Kimura (played by Kristian Lei) –– Sansei who were born and raised in California.

Like my own Hawai‘i-born Gosei children, Sammy and Kei were accustomed to an American way of life . . . until Pearl Harbor changed all that. Their lives — and that of 120,000 Japanese Americans living on the West Coast of the United States — were turned upside down. An executive order signed by President Franklin Roosevelt ordered them to leave their homes, not knowing where they were going or what the future held for them. In the eyes of their country, they were suspect because they shared the same ancestry as the Japanese imperial forces that had bombed Pearl Harbor. Their rights as American citizens were cast aside — a decision that was reinforced by the nation’s judicial system.

Gavin, a ninth-grader, was shocked because it seemed so unfair. “They never even been to Japan!” he exclaimed. “Why did our government do this to their own citizens? Why just Japanese Americans? The Germans were enemies, too, and German Americans were not treated that way,” he ranted after the performance.

Yes! My child got it! He felt something and wanted to talk about what he had learned! Mission accomplished!

Cameron, on the other hand, is a young man of few words. “It was good,” said my seventh-grader.

Unlike the men in my family, I enjoy musicals. I thought Le Phong and Lei were captivating in their performance and sang with powerful voices. They were also convincing as Sansei who had grown up with the influence of Japanese elders.

“Gaman,” sung by the entire cast, was a memorable song that encouraged the internees to endure the harsh conditions and to have hope. “Gaman, dignity, pride as we stand side by side. Even when all hope seems gone, gaman,” say the song’s lyrics.

Perhaps the most chilling scene in “Allegiance” was Sammy, a Nisei soldier, leading his men into the Vosges Mountains of France to rescue the Texas “Lost Battalion.” Everyone, except Sammy, perishes in the battle. A divine light shines from above and the fallen men rise to attention. One by one, each man hands his dog tag to a passing military officer. After the violent bloodshed, it was a powerful symbol of the dead soldiers crossing over to their final resting place.

As a family, we also talked about “no-no boys” like Frankie Suzuki (played by Miguel Cadoy III) in “Allegiance.” Although the term “no-no boys” is never used in the play, it is a colloquial term that describes those who answered “no” to questions 27 and 28 in the so-called “loyalty questionnaire” on the Application for Leave Clearance form.

Question 27 asked: “Are you willing to serve in the armed forces on combat duty?” Question 28 asked: “Will you swear unqualified allegiance to the United States and forswear allegiance to the Japanese emperor?” Historically, the “no-no boys” refused to answer “yes,” citing the violation of their civil rights and the injustice of their imprisonment and that of their families. In many camps, answering “no” and “no” to the two questions meant being ostracized by others in the camp.

The two questions were also part of an eight-panel educational display in the theatre that was created by the Ninth Judicial Circuit Historical Society. It also included an historical timeline and historic photos of the events following the outbreak of World War II. The panels were lined up in chronological order, beginning with the signing of Executive Order 9066 by President Roosevelt on Feb. 19, 1942, authorizing the “mass forced removal and incarceration of all Japanese Americans on the West Coast.” The panels took viewers through “The ‘Evacuation,’” “Life in the Camps,” “Legal Challenges” and “Lesson of Executive Order 9066.” The panels can be viewed online at https://ninthjudicial.worldsecuresystems.com/downloads/Executive-Order-9066-Panels.pdf.

“Allegiance” is a celebration of heritage, a teaching of ancestral values and a reminder of the importance of vigilance and of not letting history repeat itself. In a message in the playbill by George Takei, whose personal story inspired the play, he reminds us of why we must never forget and relates it to today’s world: “Ours is an American account with a critically relevant lesson for us today. But experiences of the past are little remembered and sometimes forgotten altogether. So chillingly, it is repeating itself once again.”

It is up to Gavin and Cameron and the rest of us to continue asking how we can all prevent the injustices in history from repeating themselves and keep our leaders accountable, be they elected or appointed. Lastly, I hope we can live in gratitude for those Japanese Americans who demonstrated gaman every day of their lives in the concentration camps, on the battlefields and for those who stood up for their beliefs.