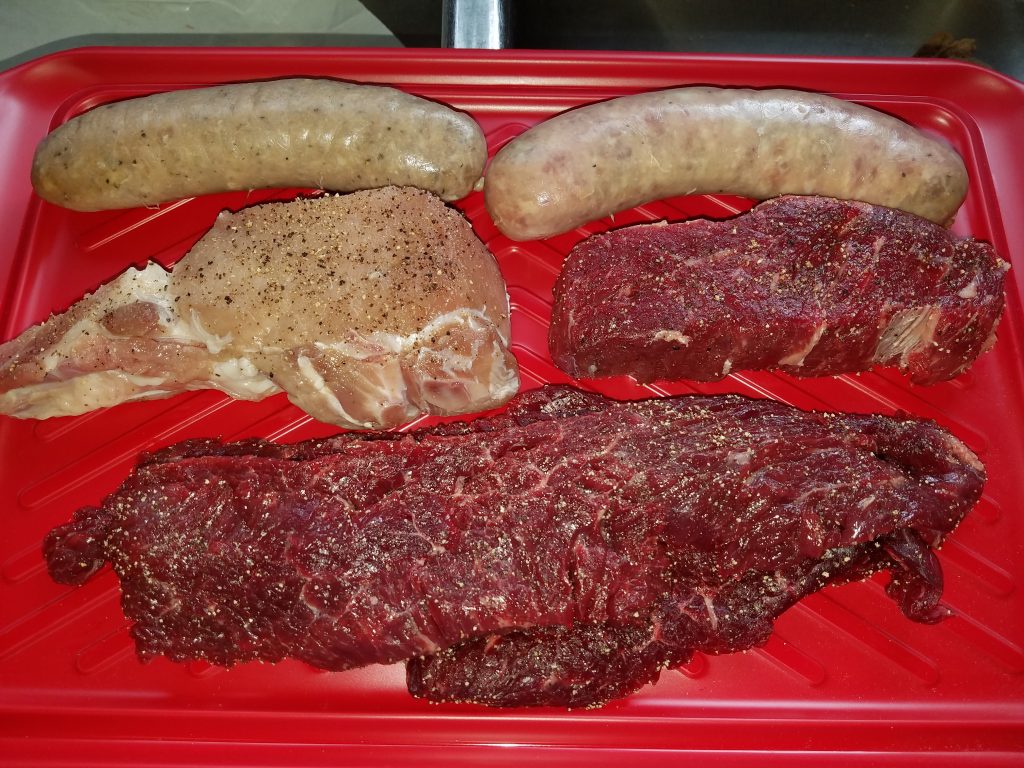 Unless you live under a rock, you’ve probably seen, or are at least aware of the proliferation of condominiums in the new “live, work and play Kaka‘ako” — ideal living conditions for local families right in the heart of Honolulu, with shops, restaurants and supermarkets all within walking distance.

Who am I kidding? Most of those condominiums are for the super-rich, for whom daily trips to Whole Foods is no big deal. I love an occasional trip to Whole Foods in Kailua, but it’s not in the budget of most working-class folks.

But don’t despair. Thanks to SALT at Our Kaka‘ako, we can still eat like the folks who own those million-dollar condos . . . without having to buy one.

Besides the usual Hawaiian favorites — kälua pig, laulau, lomi salmon, chicken long rice and squid lü‘au — Highway Inn serves dishes such as tripe stew, smoked meat, poke bowls, salt meat watercress, pülehu ribs, and kälua pig and cabbage. My favorite day to dine there is Monday (holiday Mondays, especially), when the restaurant serves unique loco moco specials. If you can’t make it on a Monday morning, they also offer a daily Smoked Moco featuring a smoked meat sautéed with peppers and onions, slathered with smoked aioli and topped with two Petersons’ Upland Farm eggs. I usually splurge by having it with fried rice for an extra $3.95 and a side of Danny Bishop’s Hö‘i‘o (fiddlehead fern shoots, known as warabi in Japanese) Salad and some Potato-Mac Salad. It’s the perfect brunch. 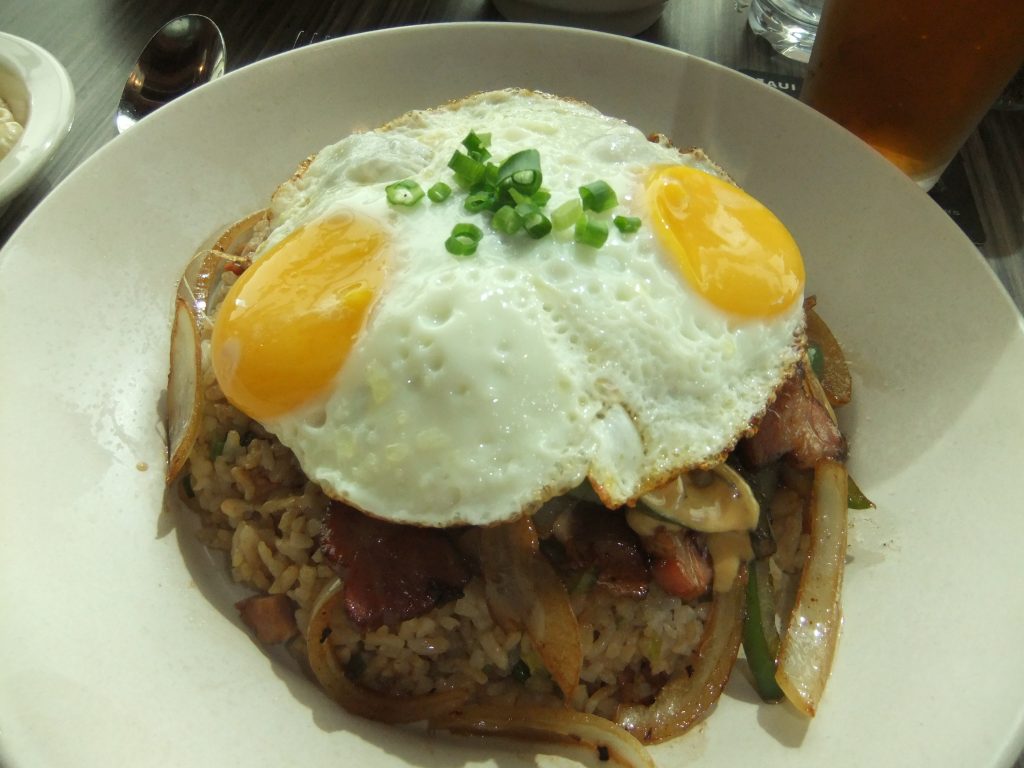 About a block behind Highway Inn is the new Hank’s Haute Dogs — I say “new” because the redevelopment of Kaka‘ako moved it about 25 feet closer to the ocean. Hank’s now serves its Lobster Dog, which was featured on “Diners, Drive-Ins & Dives,” and Lobster Fat Boy on the weekends — Friday, Saturday and Sunday. The Lobster Fat Boy is a lobster dog wrapped in bacon and deep-fried.

You can also enjoy Hank’s classic Chicago Dog, Chili Dog and Bratwurst daily, along with four other dogs — and the Hankburger — every day. I’m looking forward to trying Hank’s Greek Dog, made from a grilled lamb sausage, which is served only on Fridays. The restaurant now serves beer and wine that you can enjoy both inside and in Hank’s private dining area outside.

Regardless of where I dine at SALT at Our Kaka‘ako, I always make a point of stopping in at Butcher & Bird for locally raised beef and pork. Butcher & Bird is located on the second level of SALT. They also sell fresh and cured sausages that are aged in their on-site curing room. Additionally, you can purchase various spice rubs and house-made pickles. By now, their dessert chef should be back at work so you can also pick up cookies and other sweets.

Although Butcher & Bird serves lunch and dinner, I usually just bring along a cooler with chill packs and buy take-out from the deli counter.

Adjacent to Butcher & Bird is FISH Honolulu. During our first few trips to SALT, we bypassed FISH Honolulu because it’s an open-air restaurant. Air conditioning is one of my dining requirements because there are really only two seasons in the 50th — extremely hot summers that run from October through May, and unbearably hot summers from June through September.

Since we actually had a cool and windy winter this year, we decided to have lunch there one day. My lobster roll was delicious, but the highlight of the meal was the oysters on the half shell from Puget Sound and the fries, which were served with the lobster roll. The fries were thinly sliced potato wedges shaped like mini surfboards and very crisp and tender.

I’ve already decided that my next meal at FISH Honolulu will be a dozen (or two dozen) oysters on the half shell and a basket of those fries . . . and maybe a cocktail (or two).

On a return visit to SALT at Our Kaka‘ako with the Mrs., I was planning on getting more oysters at FISH Honolulu. We decided, however, to try lunch at Vein at Kaka‘ako. I had the Prawn and Spinach “Omurice,” which was very good, but the Mrs.’ selection, Porcini Carbonara, was the hit of the meal.

Carbonara is usually too rich for my taste since it often contains milk or cream, butter and rendered pancetta drippings. But Vein’s version was lighter. It was really delicious with the earthy porcini mushrooms, a little salt from the pancetta and the perfect egg yolk to mix in with the pasta. It was so good that the Mrs. wants to order it again when we go back there, even though my mantra is that we should always try something different. Guess what? I’ll probably order it, too!

Any visit to SALT at Our Kaka‘ako always includes a stop at Lonohana for several bars of its Hawai‘i-made chocolate. Most of the bars are made with cacao from a 14-acre farm on the North Shore, although they also create a couple of bars with cacao grown in South America. Lonohana makes several flavored milk chocolate bars. For me, however, it’s not chocolate unless it’s dark and bittersweet with at least 60 percent to 70 percent cocoa solids. My favorite is the orange and vanilla dark chocolate with 70 percent cocoa solids. Most gourmands think that raspberries make the perfect fruit pairing with chocolate. I, on the other hand, feel that orange perfectly complements dark chocolate.

The Mrs. loves their chocolate so much that she’s considering purchasing a Lonohana membership, which entitles you to several preselected chocolate bars every eight weeks.

Bevy, started by mixologist Christian Self, is one of my favorite happy hour establishments. It’s located on the mauka ‘ewa corner of SALT at Our Kaka‘ako. Bevy features an eclectic food tasting menu and some of the most innovative libations, created by the mixologist himself, including barrel-aged whiskies and cocktails. Our favorite Bevy happy hour time is between 4 and 7 p.m. on Saturdays (the weekday happy hour is 4 to 7, as well) when they feature fresh oysters on the half shell for $1.50 apiece. That’s just $18 for a whole dozen. You’d only get four oysters for that price in Waikïkï. All small plates of food and canned beer are discounted by $2. Bevy’s cocktail of the day and champagne will set you back $6. On two occasions, Christian Self created a huge cocktail bowl to photograph and post on social media. He ended up sharing that bowl with patrons — on the house. By the time the hipsters start arriving at about 8 or 9 p.m., us oldsters are already at home with sated stomachs. 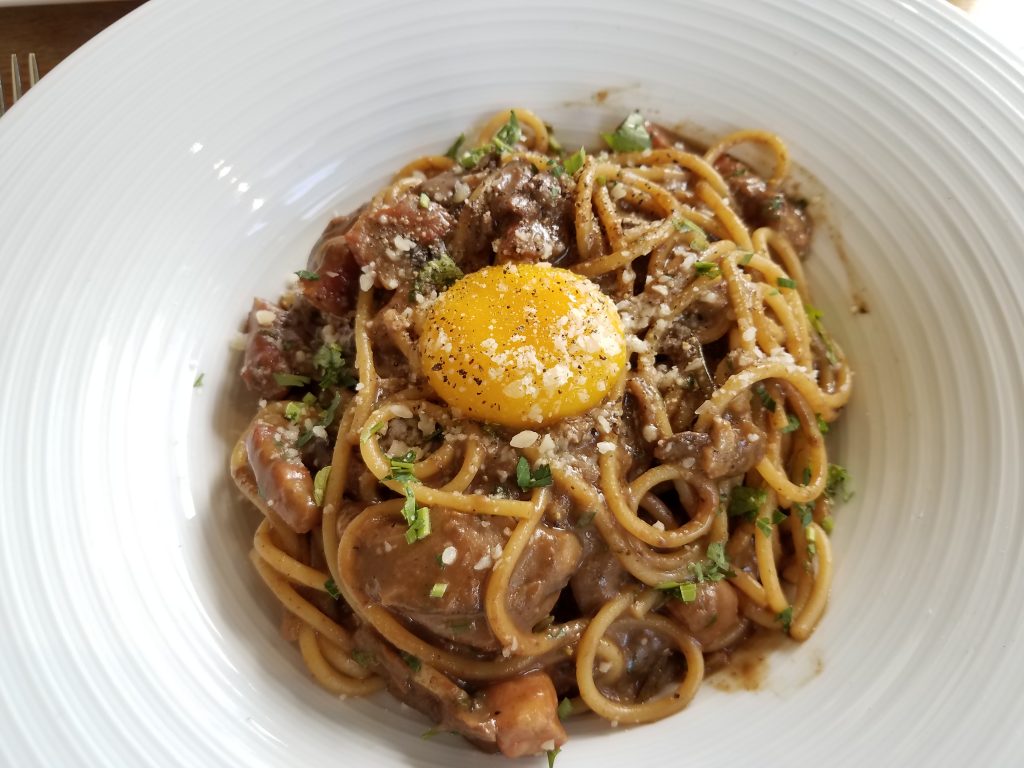 SALT at Our Kaka‘ako

Validated parking for SALT at Our Kaka‘ako is free for the first hour, $1 for the second hour and $3 for the third hour, so there’s no reason to not spend a few hours taking advantage of the great food and shopping without having to drop a million dollars for an “affordable” condominium. My next visit to SALT will include a stop at the Village Bottle Shop & Tasting Room, which offers 18 rotating beers and eight wines on tap, along with 500-plus in bottles or cans that you can enjoy on the premises or take home. But that’s another column . . .