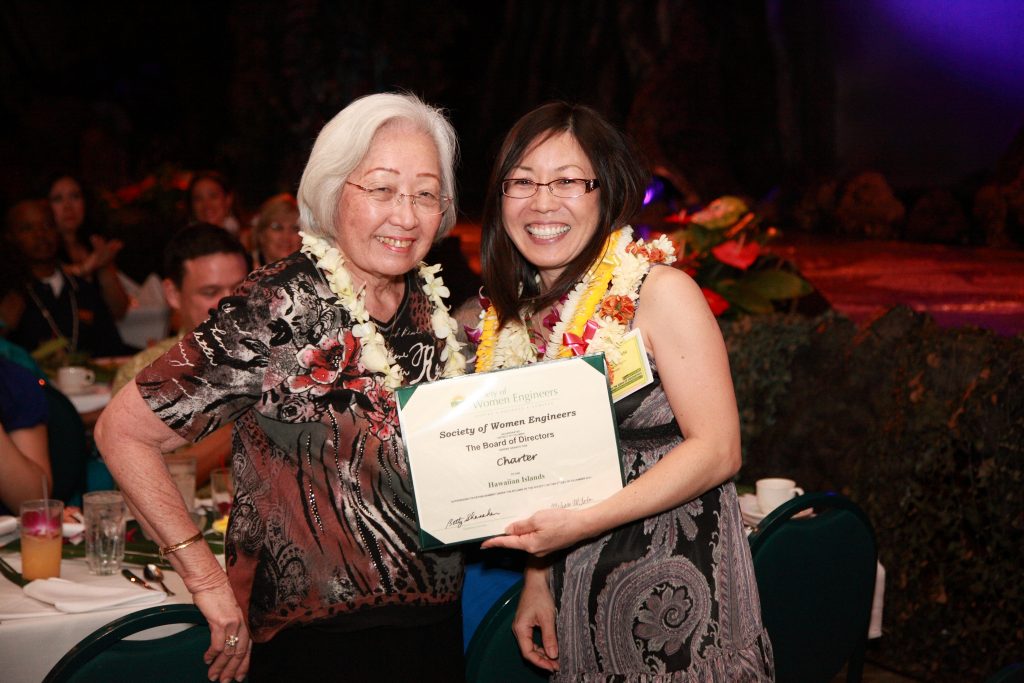 Editor’s note: The release of the D+ grade given to Hawai‘i’s infrastructure by the American Society of Civil Engineers, Hawai‘i Section, earlier this month could not have been more timely for this issue of the Herald. The co-chair of the society’s Report Card Committee, Amber Takenouchi, a civil engineer, was one of the principals quoted in news reports about the sorry state of Hawai‘i’s infrastructure.

Takenouchi is today one of many women working in Hawai‘i as civil engineers. But 65 years ago, in 1954, the first was just beginning to blaze a trail that would be followed decades later by many more women. That pioneer was Masako “Mae” Nakatani Nishioka, a sansei who was born in Hilo on the island of Hawai‘i and graduated from Roosevelt High School, where her teachers encouraged her to pursue her strength and interest in math.

As we observe Women’s History Month, we shine the spotlight on a humble and quiet woman who inspired other women like her to chase their dreams.

It’s been a while since Susan Nishioka flipped through the pages of her mother’s special memorabilia album. Its pages are filled with sheet protectors containing sepia toned newspaper articles documenting the life of a pioneer: “Whole Family Practicing Engineers, Wife Included” and “Sex Discrimination in Isles?”

Nishioka flips to another sheet protector and smiles at the headline: “21-Year-Old Girl Is First Woman Student To Graduate From Engineer School at UH.” The May 27, 1950, story in The Honolulu Advertiser by Annabel Damon is about Susan’s late mother, Masako (“Mae”) Nakatani Nishioka. It appears in the newspaper’s Women’s World section.

“She never really talked about this part of her life,” said Susan as she continues to glance through the collection of newspaper clippings and memorabilia, including a letter signed by then-Gov. John A. Burns.

Susan, who retired as a math teacher from Roosevelt High School, gives her mother’s momentous “firsts” their due — something her mother routinely played down at home. It was “no big deal,” she said, when her mom hopped a plane to New York City to represent the state of Hawai‘i at the annual International Conference of Women Engineers and Scientists, leaving her three children at home with their dad, Rikio Nishioka, also an engineer. The idea that a woman could be a wife and a mother — and have a fulfilling career as a civil engineer — fascinated both the local and Mainland media.

Mae Nishioka’s road to success began in 1950 when she became the first woman to earn a bachelor’s degree in engineering from the University of Hawai‘i. According to Pearl Yamaguchi, who counts herself among the fortunate to have been mentored and inspired by Nishioka, that 1950 class was “the largest for UH in engineering because many men were returning from their time in military service after the war. It was very competitive at that time to get a job, but she was offered a position even while she was still finishing her engineering degree.” UH was also where she met and eventually married Rikio, who was an engineering student as well.

Yamaguchi is an engineer by training, but is currently working as a principal clinical account leader with Medtronic in San Francisco. She travels to different hospitals to teach physicians about new devices and clinical traits.

According to Yamaguchi, Mae Nishioka was exposed to engineering in her youth because her father and uncle both worked for James Glover, Ltd., a construction company — her father as vice president and treasurer, and her uncle as an engineer.

Mae began her career in the territory of Hawai‘i’s Highway Planning Office, where she worked on the creation and building of the highly traveled H-1 freeway. After taking a short break to raise her three children, she resumed work at the Hawai‘i Irrigation Authority, the Public Works Department, the Department of Transportation and, finally, at UH, where she worked in facilities planning, retiring as director in 1983.

Yamaguchi, a member of the Society of Women Engineers Hawaiian Islands was one of two SWE local award winners for the Emerging Leader in Technology and Engineering Awards. She got to know Mae through her mentorship and volunteerism with SWE-HI. Yamaguchi said she understands what it’s like to not let stereotypes of men or women get in the way of producing good work.

“I think Hawai‘i culture, especially Japanese American culture in Hawai‘i, emphasizes a lot on humility and respect,” Yamaguchi said in a FaceTime interview from her current home in San Francisco. “What’s even more interesting about Mae is that she was never one to brag or mention her accomplishments. You had to ask her and then she would always say what a great job we’re doing with SWE-HI and how we’re helping so many young women . . . I would always say back to her ‘What? You’re the one who helped pave the way for us!’ and she would smile and laugh. It’s amazing how little she knew about her own success.”

Mae was an active SWE member for 59 years. In February 2017, she was to have received the Lifetime Achievement Award from the Hawaii Council of Engineering Societies for her contributions to the field of engineering and for her exemplary role as a mentor for women engineers throughout the state. However, she died Feb. 23 at the age of 88, just two days before she was to accept her award. The Nishioka family honored their mother by attending and accepting the award on her behalf.

“It was a bittersweet moment, as I remember just speaking with Mae before the event to congratulate her,” Yamaguchi said. “She said how nervous she was going to be and that she hoped she didn’t have to give a speech. I thought it was so funny because even after all these years, she still didn’t quite grasp how much she has accomplished and how truly humble she was . . . It was nice to see [daughter] Susan accept the award and for her family to be there. It was as if Mae was there with us in the room.”

In honor of Mae’s legacy, her contributions to the field of engineering and her dedication to community service, co-chairs Yamaguchi and Val Mencias created a scholarship in Mae’s honor. The Mae Nakatani Nishioka Scholarship will be awarded annually to Hawai‘i women pursuing degrees in engineering and technology. This scholarship hopes to inspire and encourage gender equity in the science, technology, engineering and math (STEM) fields.

“We’re so happy to be able to continue Mae’s legacy through this scholarship,” said Yamaguchi. “She has helped to mentor so many students who’ve gone on to succeed in their careers. She would have loved to see many more students pursue their dreams.”

None of the Nishioka chose careers in engineering. When Susan asked her mother why she and her father did not encourage their children to become engineers, “she said she wanted us to be happy and choose our own path,” said Susan.

After closing the memorabilia album filled with many of her mother’s memories and accomplishments, Nishioka paused for a minute when asked to describe her mother, the engineer, and her work ethic in three words.

“Determined. Brave. Altruistic,” said Nishioka with a smile. “I’m sure she’d be happy that something like this scholarship has come about to help students. I want to thank the SWE ladies, as they pushed for the lifetime award and for keeping her legacy alive.”

Donations are being accepted for the Mae Nakatani Nishioka Scholarship fund until June 30, 2019. For more information, go to http://hi.swe.org/scholarships.html