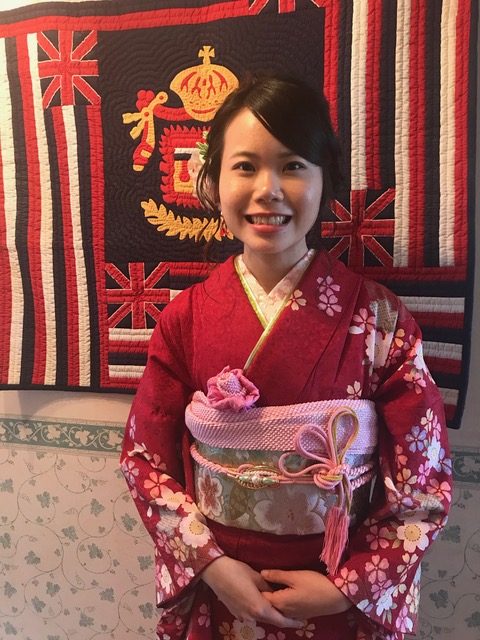 From zero to 20! That was pretty fast.

No, I’m not referring to the acceleration speed of my van, but rather to our daughter, Mizuki, who turned 20 years old last year, officially becoming an adult in Japan.

Mizuki spent her fuyuyasumi (winter break) back home in Okinawa and then returned to Yamaguchi Daigaku (Yamaguchi University) on Jan. 5. A week later, she flew back to Okinawa for her Seijinshiki — “Coming of Age Day” — ceremony on Jan. 13 at Yomitan Chuugakko (junior high school). The event is usually held at the Yomitan Bunka (cultural) Center, but the facility was being renovated, so the venue was changed this year.

Although the girls can wear a black suit and skirt combination to the ceremony, most of them prefer to wear a colorful kimono, oftentimes a treasured kimono that belongs to their okaasan (mother) or even their obaachan (grandmother). Others go to companies that offer kimono rentals and dressing services. Due to the high demand for kimono rentals, Keiko made a reservation for Mizuki in the summer of 2017 — more than a year before Mizuki turned 20!

The kimono rental and dressing and hair styling, plus the standard photo album of three pictures cost ¥100,000 — that’s about $910. Mizuki wanted the fancier photo album, which included more photos and was made of hard plastic as opposed to cardboard, so Keiko paid an extra ¥50,000 ($455) for that package. We kept reminding ourselves that Mizuki is our only daughter as we forked over the money.

But Seijinshiki isn’t a coming of age ritual for young women only. It’s for guys, too.

Many guys wear a black suit. Others dress up in hakama, a pleated skirt-pants. Keiko recalled that when she attended her Seijinshiki in Tokyo, most of the guys wore suits. She said hardly anyone wore a hakama,. That seems to have changed over the years because there were guys wearing hakama at this year’s Seijinshiki.

They were the “Yankees,” a term used for the unruly, rebellious, rascal, mischievous guys who wear hakama, as well as sunglasses and a “panchi pa-ma” (punch perm) hairstyle. According to Keiko, they aren’t all “true Yankees.” Some dress up that way just to make a statement at this once-in-a-lifetime ceremony.

Mizuki got to bed early the night before because she had a 5 a.m. — you read that right, 5 a.m.! — appointment in Chatan to have her hair done and get dressed in her kimono. I heard some moving about in the house at 4 a.m., while I was still mostly asleep. It was Keiko and Mizuki getting ready to leave. They were out the door by 4:30.

The next thing I knew, Keiko was leaving the house again, this time at 6:30 in order to pick up Mizuki at 7. On their way home, they stopped at the McDonald’s in Kadena to pick up some breakfast and got home around 9. Poor Mizuki. She couldn’t move around much, so she tried to stay put and entertain herself with her iPhone.

Her official photo session was held last September, but I was in Hawai‘i spending time with my mom and attending the Okinawan Festival and the Hawaii Okinawa Plaza opening ceremony, so I missed the opportunity to take a parents and child shot with Keiko and Mizuki.

After snapping a picture of Mizuki with our Hawaiian quilt, hand-made by my mom, in the background in recognition of Mizuki’s Hawaiian cultural and ethnic background, I put on my suit — still fits, although barely — for a dad and daughter shot in front of our hinpun (privacy wall) with our Sewake family name plate affixed to it. I stepped back to take another photo of Mizuki with the entire house in the shot, because it’s where she has spent most of her life. Keiko and I moved from Chatan to the home we built in Yomitan just before Mizuki turned a year old. I told her otöto (younger brother) Aki to get in on a kyödai (siblings) shot, so he threw the fluffy scarf that accompanies the kimono outfit around his neck. The scarf is worn in colder weather, usually in mainland Japan, at this time of year.

Although Mizuki was taking part in this time-honored ritual, she told me that it “hasn’t hit me ­— the fact that I will be adult.”

“I am very thankful to my parents who raised me, and I’ll be responsible for my behavior as an adult,” Mizuki said.

After taking a few family photos for our memory album, Keiko took Mizuki to make her rounds, stopping first at the elderly care home to visit Obaachan, Keiko’s mother. Mizuki also visited a couple of friends and then she and Keiko headed for Yomitan Chuugakko (Yomitan Middle School), where I was waiting for them.

Although most parents do not attend the ceremony, I didn’t want to miss out on this milestone event in my only daughter’s life, which isn’t celebrated anywhere in America.

As people were taking photos and laughing and catching up with each other, a convoy of buses, vans and “tuk tuks” (motorized rickshaws) decorated with banners, garland and other ornaments came rumbling down the street as the group from Furugen showed up. They even brought a bull with them!

I should explain: Yomitan has six shögakkö (elementary school), two chügakkö (middle school) and one kökö (senior high school). Kökö attendance isn’t mandatory in Japan, so the participants are more often identified by the chügakkö from which they graduated. In the case of Yomitan, the students attended either Yomitan Chügakkö or Furugen Chügakkö.

Once the Yankees representing Furugen Chugakkö passed by to park their vehicles, Keiko, Mizuki and I continued walking towards the Yomitan Chügakkö taikukan (gym), where the Seijinshiki was scheduled to start at 2 p.m. Mizuki continued to meet up with more of her friends and take pictures, including some with Yomitan’s mascot, Yomiton, who was born to its buta (pig) father and beniimo (Okinawa purple sweet potato) mother.

The conversations, laughter and smiles continued until the Yomitan Sonyakuba (village office) staff ushered the crowd inside for the start of the ceremony. Mizuki had arranged to meet her friends in Haebaru, so Keiko rushed her home while I stayed for the entire program.

It began promptly at 2 p.m. with welcome remarks, followed by Yomitan Mayor Denjitsu Ishimine’s speech. His speech was followed by remarks from the Yomitan Gikai gichö’s (assembly chairman) and an address by two of the new adults — a guy from Furugen Chügakkö (the one who wore the rainbow-colored wig) and a gal from Yomitan Chügakö.

The program continued with a slide and video show featuring all of the young people who were turning 20 as they grew up in Yomitan. The photographs had been submitted from the two middle schools. Teachers had also recorded congratulatory messages on video, and some of the new adults performed songs and a comedy act. The entertainment portion concluded with a dance routine by current Furugen Chügakkö students and the Yomitan vice mayor closed the ceremony with his remarks.

As everyone rushed to the exits, I made my way to greet Mayor Ishimine and FM Yomitan Radio president Tomoharu Nakasone, who didn’t know that Mizuki was celebrating her Seijinshiki.

People hung around outside the taikukan to congratulate each other. The Furugen group was setting up to take a group photo. I stayed for a bit to enjoy the voices and smiles of the people celebrating and reminded myself that I’ll get to experience this again in two years when it’s Aki’s turn to celebrate his coming of age.

It was a whirlwind weekend for Mizuki, who flew back to Yamaguchi the next day. In two years, she will be graduating from Yamaguchi Daigaku, where she is studying to become a clinical technologist. It’s a career that will have her doing all kinds of medical testing, including blood work, MRIs, ultrasonography, cell research, urinalysis and electrocardiograms.

A few months ago, with a bit of trepidation, I asked Mizuki whether she planned to remain in mainland Japan after graduating, or to return to Okinawa and find work here.

Mizuki said that she’s on the mainland for her studies and that she wants to come back home to Okinawa to work and live.

Keiko and I have watched our little girl grow up faster than we ever imagined. “She is growing up so fast,” said Keiko. “She has always been a good girl and she still is today
. . . I’m proud of her.”

Just a “few” years ago, I was taking Mizuki around the island to do fun things. I attended her undökai sports day events at Tokeshi Elementary School and watched her play with her friends and her younger brother in our house. In just a couple of years, she’ll be graduating from Yamaguchi University and will be on her own, working in the community and supporting herself.

Like other parents, Keiko and I did our best to raise our kids properly so that they can become contributing members of society. I’m really impressed that Mizuki has grown up to be a well-mannered, responsible, self-motivated and mature young lady. As I look back on the past 20 years, I’m glad I made the decision to settle in Okinawa and provide Mizuki and Aki and Keiko with a stable environment in which to grow up, like my own upbringing in Hawai‘i, while also having had the opportunity to travel with her to mainland Japan, Hawai‘i and Hong Kong to give her a broader exposure to different locations, people and cultures.

Yes, zero to 20 came and went pretty fast, but I know my life has been so much richer because of Keiko, Mizuki and Aki and our life here in Okinawa.

Colin Sewake is a keiki o ka ‘äina from Wahiawä, O‘ahu, who was assigned to Kadena Air Base in Okinawa in December 1994 to fulfill his U.S. Air Force ROTC commitment. He met his future wife, Keiko, within a month and decided to make Okinawa his permanent home. Colin retired from the Air Force and, recently from the Air Force Reserves. He now works as a customer service representative for Hotel Sun Palace Kyuyokan in Naha. Colin and Keiko have two young adult children and make their home in Yomitan.