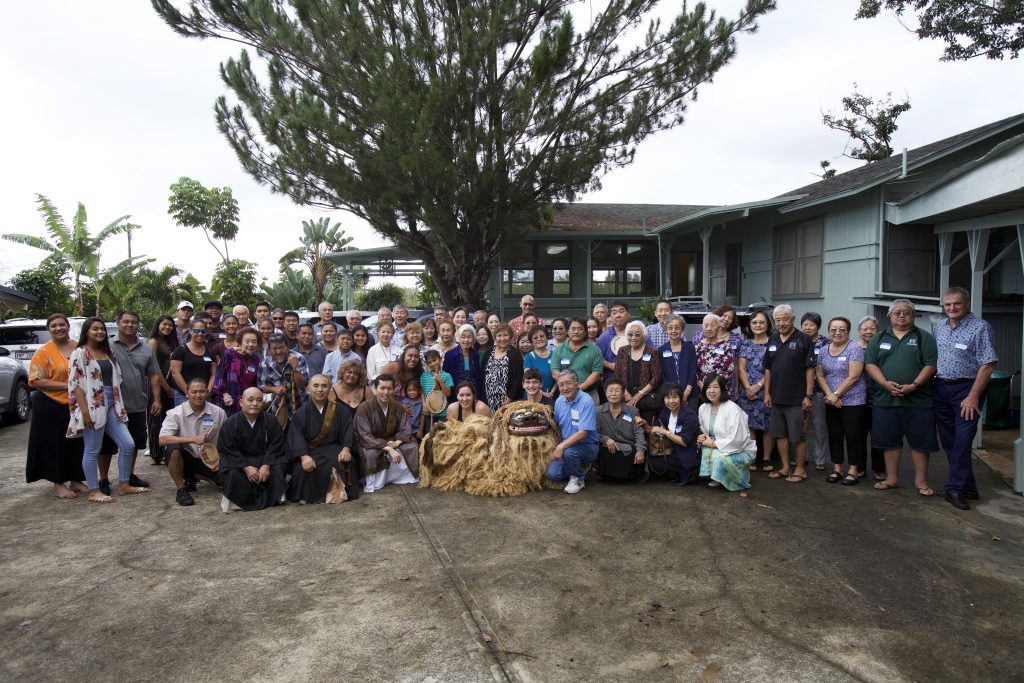 The Rev. Myoryu Aniya is Remembered With Fondness and Gratitude

“In February 1948, a Lotus temple appeared at Pu‘u Place, Wahiawä, a block away from Rev. (Myoryu) Aniya’s residence. The members purchased two old military houses, and put them together to create a temple and living quarters.”

So begins the story of the Wahiawa Nichiren Mission as documented in “A Century of Nichiren Buddhism in Hawaii,” which was published in 2003 by the Headquarters of Hawaii Nichiren Missions. Nichiren Shu is one of several sects of Japanese Buddhism practiced in Hawai‘i.

Rev. Aniya was known for her healing and psychic abilities. Along both sides of the entrance to her modest wooden temple/home, she hung the Lotus Sutra on violet-colored scrolls.

Last November, the Wahiawa Nichiren Mission celebrated 70 years since the temple’s humble start. Although small in size with only 17 aging, but active, members who range in age from 60 to 90, they maintain the temple because they remember how Rev. Aniya helped their families when they needed it most.

Among the temple’s most ardent supporters is the family of the late Shigeo Sora, who Rev. Aniya healed of his illness. Sora was a Christian when he fell seriously ill. His daughter Beverly was only 8 years old at the time and doesn’t remember many details. When traditional medicine could not help her father, his family turned to Rev. Aniya, who prayed for him and continuously recited the Lotus Sutra. Shigeo Sora recovered and went on to live a long life, passing away in 2009 at the age of 92.

Sora and his family — his late wife Edith and their two children, a son, Melvin, and a daughter, Beverly — all became devout Nichiren Buddhists and devoted members of Rev. Aniya’s temple.

As a Buddhist order, Nichiren Shu was founded in 1274 in Yamanashi Prefecture and named for its founder, Nichiren Shonin. The “Shu” refers to “order,” or sect. Nichiren Shu’s website, www.nichiren.or.jp/english/teachings/, says the sect strives to propagate the essential truth of Buddhism as taught by the priest Nichiren Shonin.

Valerie honors her great-grandmother by sharing stories about Rev. Aniya with her cousins and other family members. Whenever she learns something new about her great-grandmother’s life, she emails it to her relatives in hopes that they will pass it on to their children and grandchildren.

Valerie said she first learned about her great-grandmother’s role in the Wahiawa Nichiren Mission in 2012, at the centennial celebration of the Nichiren Sect in Hawai‘i. She said she immediately began sharing what she had learned with other family members:

“Bishop [Kanryu] Mochizuki had no time to pack from Kapapala to his new post in Honolulu. The events of December 7, 1941, overtook him and his family and they ended up in the internment camps on the mainland eventually ending up at the Tule Lake Camp. Mrs. Kisayo Ozawa recalled that during the Japanese attack, an anti-aircraft shell fell in the adjoining stream and the members who were cleaning gathered for protection in the (Honolulu) temple. These were dark days for the temple until the return of Bishop Mochizuki in 1946. Curiously, the camaraderie of the various Japanese Buddhist ministers in the internment camps resulted in a very strong-knit postwar organization. Bishop Mochizuki ordained an immigrant woman minister, Rev. Myoryu Aniya, who built the Wahiawa temple.”

Valerie continued to share more history with her family, mainly from the printed programs of anniversary celebrations and the history of the founding of Wahiawa Nichiren Mission.

In another e-mail Schmidt wrote:

“It is my understanding that Baban (Rev. Aniya) asked Japan (Nichiren headquarters) to be ordained as the first woman reverend. This was granted to her. During the war, Soei Aniya (Rev. Aniya’s son) began to translate to help people in Wahiawä via the Wahiawa Kyoyu Kai. She had hundreds of people from all over the island come to see her for her lessons through the temple as well as for her healing and psychic abilities.”

As a young child, Valerie remembers seeing the line of people outside her grandmother’s temple, all waiting to spend some time with the gifted Rev. Aniya. 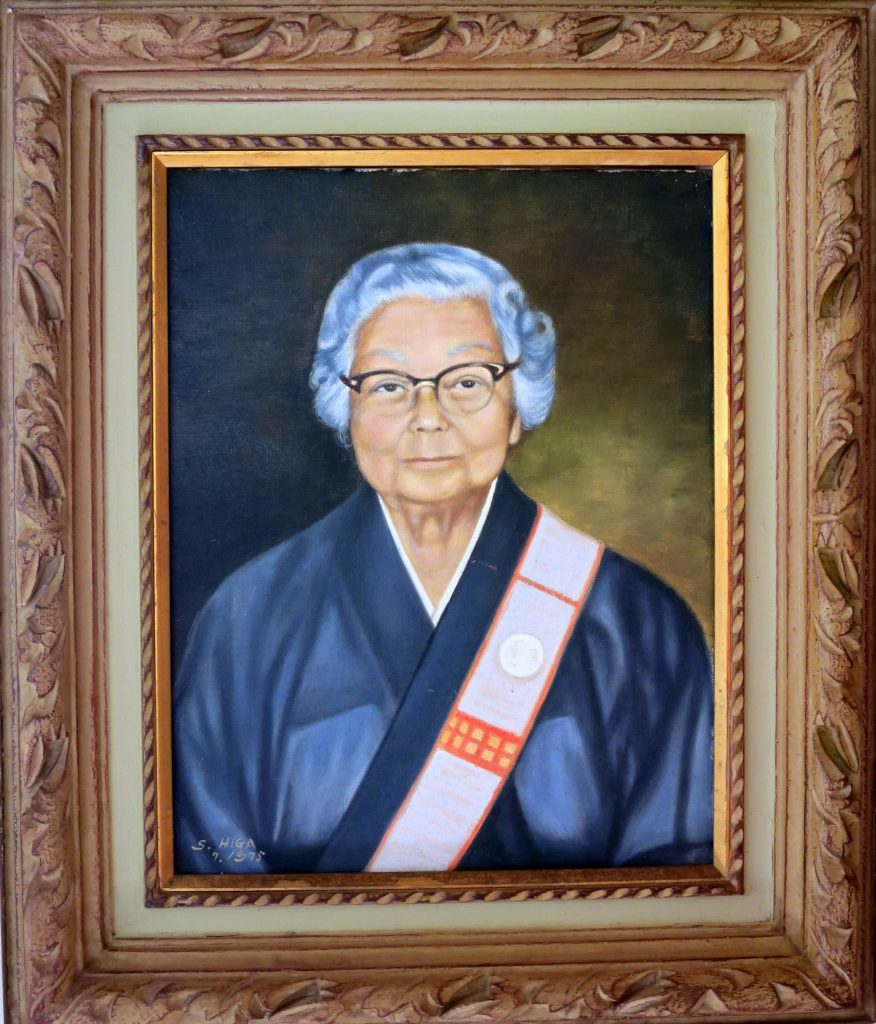 Jerrilyn Segawa, whose late parents, Henry and Beatrice Okuda, were active members of the church, shared her memories of Rev. Aniya.

“My earliest memories of Rev. Aniya date back to about the time I was 4 years old, when my brother (Harris Okuda, who passed away in 2016) and I would accompany my mother to church for Rev. Aniya’s prayer services. To my brother and I, going to church meant we had to be on our best behavior, which meant sitting on zabutons on the floor and being quiet for what I’m sure seemed longer than it actually was. We really didn’t mind, as my mom would always remember to bring snacks for us to keep us occupied.

“Being exposed to attending church from such an early age seemed to be just a normal part of our lives, even though we never quite understood the prayers and the chants. Years later, I would be asked by Rev. Aniya to conduct Sunday school services for our members’ children, which was a good idea, as at least some of the service would be in English. At each service, one of the children would be asked to read a prepared sermon in English.

“When I was older, I asked my mom why she chose to attend Wahiawa Nichiren Mission. She said it was because of Rev. Aniya’s powers in helping people through prayer. Since I was hospitalized multiple times from about the age of 3 for a bleeding disorder, my mom had hopes that Rev. Aniya would be able to help not only her [to] deal with it, but also help me get better. I can still remember Rev. Aniya taking the time to travel from Wahiawä to Honolulu to visit and pray for me on my numerous hospitalizations. I really felt special that she would do this for me.

“That memory still remains with me, as Rev. Aniya was always an important part of our lives. As a special thank you for her devotion, we chose to honor her with a special bouquet at our wedding many years later,” wrote Segawa in an e-mail.

Rev. Aniya died in 1985 at the age of 93, leaving behind a congregation whose hearts were filled with gratitude for all she had done for them.

Last year’s 70th anniversary commemoration was the members’ way of “thanking her for her many years of devotion,” wrote Segawa.

“Although the future of this temple remains questionable due to our aging and declining membership, I believe those who remain do so because of Rev. Aniya’s positive influence in all of our lives. Therefore, we will strive to keep Wahiawa Nichiren Mission open for as long as we can.”