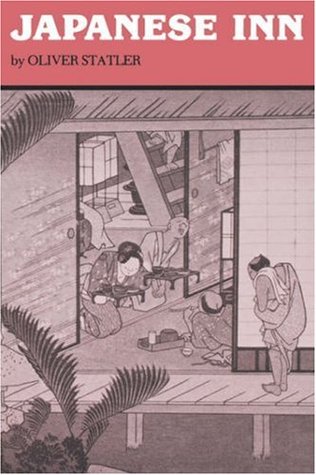 “Once again I am driving southwest on the great Tokaidö Road that runs between Tökyö, the present capital of Japan, and Kyöto, the ancient capital . . . I am headed for the dream-haunted calm of the old inn called Minaguchi-ya.”

And so begins Oliver Statler’s classic recreation of an evanescent world that has long ago disappeared into the tide of memory. Published in 1961, Statler’s “Japanese Inn” met instant success in its initial printing, attracting an international audience of admirers who were captivated by its gentle reminiscences, unabashed romanticism and historical asides of feudal Japan.

Stationed in postwar Yokohama in 1947, Statler fell in love with all things Japanese and became an expert in modern Japanese woodblock printing, specializing in masters such as Onchi Koshiro. He lived and worked in Japan for 11 years before returning to the United States in 1958, where he cultivated a writing career that eventually spanned five books, all centered on Japanese art, history and culture.

In 1977, Statler began an association with the University of Hawai‘i that would last decades, serving as a visiting professor of Asian Studies. He decided to settle in Hawai‘i, in part because of its closeness to Japan, physically and culturally.

While “Japanese Inn” initially appeared to be a simple record of a single waki-honjin (secondary inn) on the old Tokaidö Road, in reality, it served as a portal into 400 years of Japanese history, stretching from the rise of Oda Nobunaga to the American occupation that followed the end of World War II. Within this walk into the clouds of the Japanese past, Statler included such illuminati as Tokugawa Ieyasu, the warrior daimyö (feudal lord) who united Japan and dreamed of turning his nation into a global center of maritime trade; Yui Shoetsu, the would-be usurper of the Tokugawa Shogunate; and Prince Saionji, the last genrö (retired elder statesman), who struggled to keep Japan on a pacifist path as it hurtled toward Armageddon in the 1930s.

The golden thread that binds together all of the different characters within Statlerʻs narrative is the celebrated Tokaidö Road, once the spine of preindustrial Japan. Stretching out over 300 miles, it was the world’s busiest highway, connecting the two largest cities in Asia. Lined with pine trees and packed with sand and stone, the Tokaidö was bordered by spectacular views that were popularized by artists like Hiroshige, who travelled the thoroughfare searching for inspiration. In an era where daimyö were expected to spend every other year in Edo, the Tokaidö was heavily used, attracting prostitutes, pilgrims, gamblers and revolutionaries, all seeking their own version of redemption. Sitting on the sidelines with a perfect view of this parade was the 400-year-old Minaguchi-ya, whose doors were open to travellers like the Dutch physician Engelbert Kaempfer, whose diary captured the beauty and spirit of everyday life along the Tokaidö. Following in his wake were the frantic emissaries of Lord Asano, returning to their home in Ako, bearing the desperate news that their daimyö had already been condemned to die after striking the preening Lord Kira in the Shogun’s castle.

Statler grounded this fleeting world by focusing on the small details of everyday Japanese life as he captures the nuances of Japan in all its eccentricity, fragility and pathos. The beauty of Statlerʻs book also lies in his syntax, which is poetic and flowing, yet quietly restrained. There is an unmistakable rhythm to his narrative that feels like the ebb and flow of a deep ocean current, endlessly surging, yet never hurried or over-reaching. Unlike some outsiders who attempt to capture the truth of a foreign land through sarcasm and dystopia, Statlerʻs novel is enhanced by the incandescence of his abiding affection for Japan. Even as he wrote about the flaws and foibles of his adopted land, he did so with an understanding of human idiosyncrasy and weakness that revealed a broadness of thought that made the book openhearted and wise.

It is telling that the longest chapter in “Japanese Inn” was dedicated not to the famous and fortunate, but to Jirocho, the shadowy gangster boss of Suruga, whose fiefdom encompassed the Minaguchi-ya. Thrown to the winds at a young age, Jirocho carved out a place in the Japanese sun by constantly reinventing himself and adapting his skills to whatever was needed in his turbulent lifetime. Operating on the margins of Japanese society, he created his own code of honor that was as moral and righteous as the bushidö (Japanese samurai warrior code). Jirocho strutted among the dreamers, rebels and outcasts that also filled Statler’s book and made it so enchanted, human and accessible. Like the Japanese he wrote about, Statler had a special place in his heart for the high flyers who ventured too near the stars and were punished for their hubris and exuberance.

For all of the vitality of “Japanese Inn,” however, there is an inescapable sense of melancholy that permeates each page as if, even at mid-day, the action is bathed in twilight. After all, it was Statler’s intent to capture the sweep of a bygone era, when the Tokaidö still belonged to warriors, wastrels and wanderers, and the inevitability of the modern had not yet arrived.

But Statler’s book is more than just an exercise in nostalgia and memory. Ultimately, “Japanese Inn” is about the relentless waves of change seen through the eyes of the Minaguchi-ya that ceaselessly beat against the shores of Japan, rewarding the flexible and destroying the rigid: Samurai become innkeepers, criminals become folk heroes and emperors become mere figureheads. Nothing — and no one — is spared from the onslaught of the new. In the end, sanctuaries like the Minaguchi-ya represented more than just a place of refuge and respite for the weary traveller on the road. Through its simplicity and serenity, the inn provided a safe harbor for all of its guests who sought shelter from the storm of each new century that ultimately transformed Japan from a hermit nation into a technological wonder that would take its place on the world’s stage.

Statler ends his tale with a chapter on the historic visit of Hirohito to the Minaguchi-ya in 1957, providing intimate details of the protocols that were required to ensure the purity and protection of the emperor. It’s a checklist that resonates more like the origin chant of the Japanese nation: Each ceremony, prayer and ritual enacted is hardly arbitrary, but rather rooted in traditions that stretch far back into the fog of time. And everything, from the construction of new shoji to the selection of the royal meals, feels like it is best carried out in half-whispers if not unbroken silence.

There is something eternal and impermeable in Statler’s final pages that pervade the very air of his writing. After the toss and turn of his preceding chapters, Statler attempts to reassure us that no matter how much Japan changes, the country remains unalterably and irrefutably Japanese. But that is a difficult conclusion to arrive at after finishing “Japanese Inn.” What may be more helpful are the words of an age-old aphorism that says the world gains and loses something valuable with the arrival of each new generation. And that is the real story that Statler tells in his elegant book about a lost world that is gone from us forever.