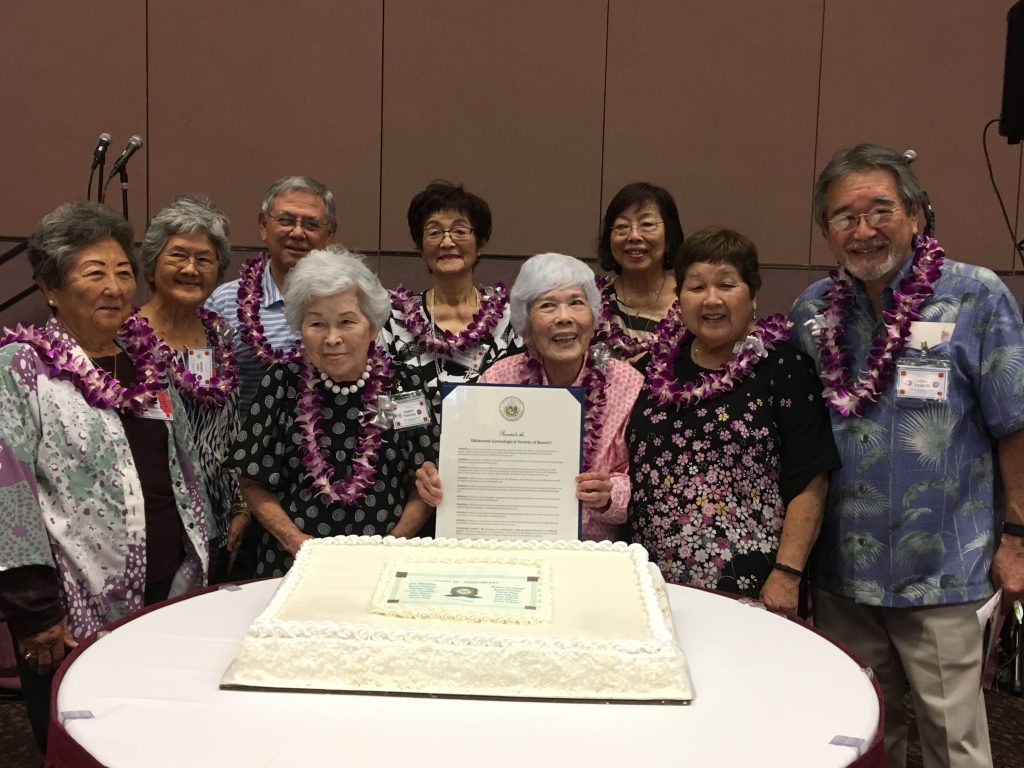 The Okinawan Genealogical Society of Hawaii celebrated 25 years since its formation with a party at the Hawaii Okinawa Center on Nov. 3. “Keishoo: Passing On to the Next Generation” was the theme of the celebration, which was dedicated to OGSH’s surviving charter members.

Current president Rodney Kohagura reviewed some of OGSH’s accomplishments, including its tour to Okinawa last March. He said the eight to 10 members who joined the tour “made tremendous discoveries about their families” and created stronger relations with Okinawa. Over the years, OGSH has developed ties with the Okinawa Prefectural Library and the Okinawa Hawaii Kyokai. OGSH is an associate member-club of the Hawaii United Okinawa Association and staffs the genealogy table at the annual Okinawan Festival. The club also supported the HUOA’s Hawaii Okinawa Plaza fundraising campaign with a $10,000 donation.

Members decided to organize as a club after participating in a genealogy workshop led by Dr. Bernice Hirai of the Hawaii Hiroshima Heritage Study Group. In the anniversary program booklet, Hirai is quoted as saying, “Among all the clubs I helped start, the Okinawan genealogy club has blossomed into the largest, most active and successful.” Hirai, a koto sensei, was an invited guest at the celebration.

OGSH members meet monthly to share genealogical, historical and cultural information about Okinawa with each other and to listen to guest speakers.

In the program booklet, OGSH vice president Donna Nakazato Nakamura, a sansei, summed up her reason for being involved in the organization:

“Ours is not a solitary journey; we take along the legacy of those who came before us, those who walk with us now and those who will come after us. Through the efforts of many individuals seeking to learn more about their roots, personal family trees have grown deeper roots and sprouted new branches and leaves that collectively has become a forest. It is a ‘reforestation’ effort for our motherland and in our current homeland and reminds us how connected we remain although separated by time and a vast ocean.”