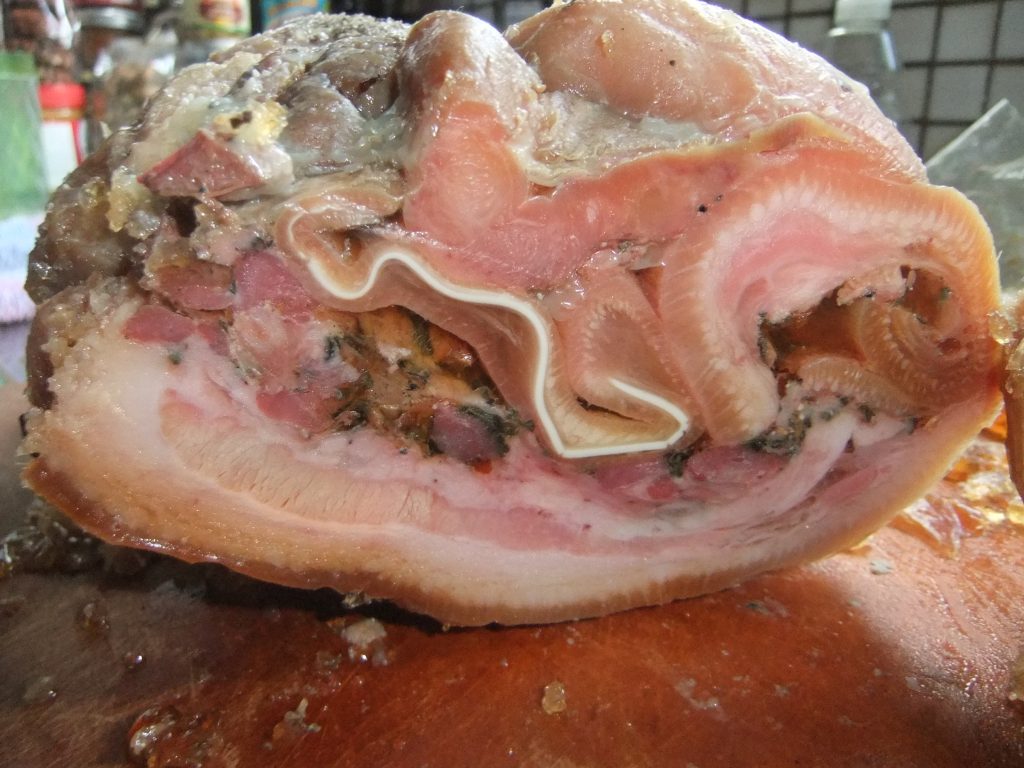 No matter that they are the hairless variety raised commercially throughout the country, mainly for ham, chops and bacon. Porcine are the artisanal Red Wattle or Berkshire variety served at upscale restaurants, or the black-footed free-range variety that gorges on acorns to produce that ham of the gods, Jamon Iberico Bellota. Unless you are a dyed in the wool vegetarian, I’m sure you have a favorite pork-based dish. In fact, I’m pretty sure that even some self-proclaimed vegetarians are closet bacon consumers in the privacy of their own homes.

Cuts of loin and tenderloin command the best prices that are usually highlighted on restaurant menus. These are the cuts used for pork chops and a crown roast of pork. As Americans adjust their dietary habits to reduce their intake of saturated fats, commercial pork producers are producing leaner pork than they were a generation ago. That means the expensive cuts can easily dry out and toughen with overcooking — and are further ruined by Mom’s and Grandma’s old wives’ tale that pork should be cooked until totally brown. Therefore, they benefit from a brine that helps to break down the protein structure of the flesh so it doesn’t suddenly seize and contract when heat is applied.

At the supermarket, I look for sirloin because its price rivals even pork butt, but is less than half the price of loin or tenderloin. It also contains both light and dark meat (yes, pork does have light and dark meat) and it’s my favorite cut to marinate and then smoke low and slow. I also slice the sirloin thin for stir-fry dishes like pancit or fried rice and use the larger pieces for my personal version of smoke meat (note: in the 50th, it’s “smoke meat,” not smoked meat).

The belly. Yes, that often-maligned cut shunned by everyone but the most diehard of pork consumers. With the skin still attached, the belly often ends up rubbery if not cooked right. Forget the marbling — the belly has more than a week’s supply of saturated fat. Until consumers realized that, bacon was nothing more than cured pork belly that had been smoked and then fried.

Most chefs have noticed the change in the public’s perception and are now using the belly for more than bacon. It’s hard to find a restaurant menu these days that doesn’t have a dish that highlights pork belly. In fact, restaurateurs’ demand for pork belly was so great that former local artisanal pork farmers, the Shinsatos, had a hard time selling other cuts of pork because pork belly was in such high demand.

I was also amazed by the interest in creating pork belly dishes — from the traditional Okinawan rafute (shoyu-simmered pork belly); to a deconstructed BLT with the belly simmered in maple and bourbon; to making porchetta, which is a whole pork belly covered with fresh herbs and either pork sausage or loin and then slow-roasted until it’s time to crisp the skin to create the perfect chicharron.

For starters, “offal” isn’t the same as “awful.” Offal are the organs and entrails of an animal that most diners happily pass on. These days, however, offal usually refers to any cut of the animal that is not particularly desired by the general public.

As you’ve probably figured by now, I love these cuts because: 1) it takes a lot more skill to prepare these often-tough and fibrous cuts, which usually means low and slow braising and seasoning; and 2) I believe we are obligated to honor and respect the animal we sacrifice by not wasting any part of it.

I used to simmer smoked pork hocks to get a broth for my semi-vegetarian Portuguese bean soup and then discard the expended shanks once the broth was completed. However, I now pressure-cook fresh and smoked hocks and then remove everything except the bone to create a luscious trotter terrine. After letting it set overnight, I serve thin slices of it with a ginger-green onion pesto and a glass of chilled Riesling. The mixture of Asian spices, the slight smokiness and luscious gelatin and crunchy bits makes for the perfect appetizer.

I also created my own rendition of Porchetta di testa, which is the Italian version of head cheese. Basically, half of a boned pork head is cooked sous vide (under vacuum) for 18 hours at 190 degrees after smothering it with a fresh herb paste. After chilling it for two full days, the resulting roll can be either thinly sliced or cubed and then breaded and deep-fried. Like the trotter terrine, the final product is a mixture of textures, and because of the fat and gelatin, it is an unctuous, delicious delight!

I also have a penchant for fried pigs’ ears, which I first sampled at a vendor’s table at the weekly Windward Mall Farmer’s Market. The ears are basically skin and cartilage, so they have to be cooked for quite a while to break down the connective tissue. Once that’s done, you can toss them into a deep fryer to puff and crisp. My friendly merchant at Windward Mall isn’t the only one who makes these crunchy delights. Chef Teddy Uehara of Agu Ramen serves mimiga, or thinly sliced fried pigs’ ears, with a spicy mayonnaise-based ”volcano” sauce at all of his Hawai‘i restaurants.

Cheeks, necks and shanks anyone?

Italians have been salt-curing pork jowls for years and these guanciale are used interchangeably with their salt-cured pork belly, or pancetta. Due to the fat content in these cuts, they are often used to flavor any dish with their fat and salt content. The actual cheek meat is perfect for braising because it also adds a rich gelatin to the final dish.

I’m sure you’ve seen veal and beef shanks at your local supermarket. Pork shanks aren’t as easy to find at most supermarkets, however. In fact, Chef Zone, near the airport, is the only “market” where I have purchased pork shanks. They’re sold frozen in vacuum-sealed six-packs. I’ve slow-cooked them Italian style with garlic, tomatoes, dried herbs and wine; Asian style with Chinese five spice, shoyu and Okinawan awamori; and Middle Eastern style with coriander, cinnamon, cumin and cardamom with loads of garlic and white wine. The pig’s legs do a lot of work, so the meat is very flavorful, and the long cooking breaks down the abundance of connective tissue, making the sauce even richer.

If the aforementioned cuts of pork are still too adventurous for you, how about a toasted double-pork sandwich? The Cubano, or Cuban sandwich, is believed to have been introduced to America in the late 1800s or early 1900s, when there were no restrictions on travel between Cuba and Florida.

The Cubano sandwich starts with a loaf of Cuban bread, although any submarine type roll is fine. The roll is sliced lengthwise and then toasted with either butter or oil and then layered with yellow mustard, roast pork, ham, Swiss cheese and sliced dill pickles. It’s then pressed in a sandwich press. If you still have your George Foreman grill, it’ll work just as well. Most of the ingredients are available at your local supermarket — you just have to decide what type of roast pork you want to use. Personally, I like making my own Lechon Asado, or pork ham, or shoulder marinated overnight in sour orange, garlic, oregano, black pepper and olive oil and then roasted or smoked the next day.

The roasted pork will give you a whole week of sandwiches. I use a pork sirloin roast, which is a little healthier option. You can look online for the authentic naranja, or sour orange juice, or get lucky at Marukai when they occasionally stock Okinawan shikuwasa juice (sour lime juice) — or you can just mix two parts orange juice with one part each of lemon and lime juice. 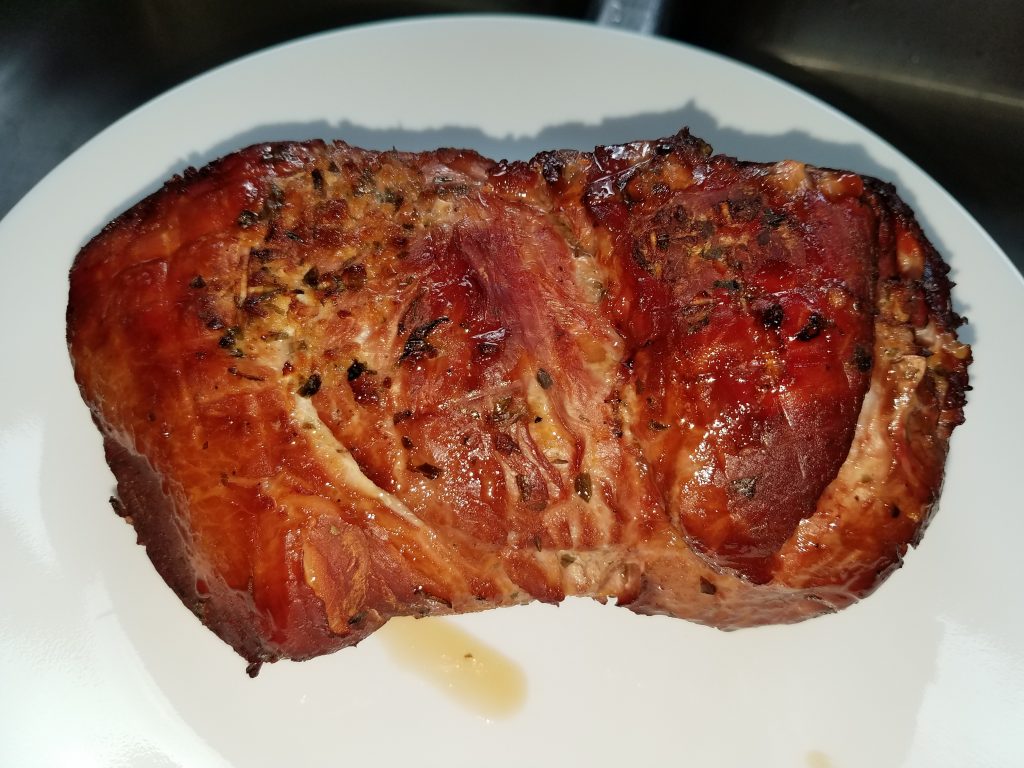 12 cloves of fresh garlic mashed through a garlic press

Poke several holes throughout a sirloin roast with a paring knife. Mix the liquids, solids and seasonings and let the pork marinate in the refrigerator overnight (the acids in the citrus will make the exterior of the pork appear cooked). Roast or smoke at 225 to 250 degrees until the internal temperature reaches about 160 degrees (about three hours) if you want sliced pork. If you want pulled pork, roast or smoke it until the internal temperature hits 195 degrees (about four and a half hours).