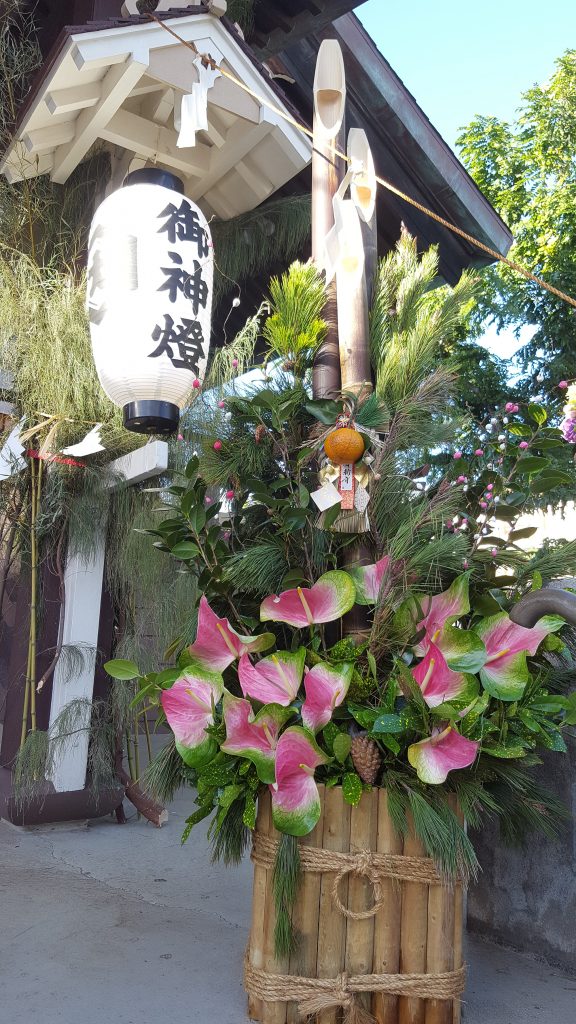 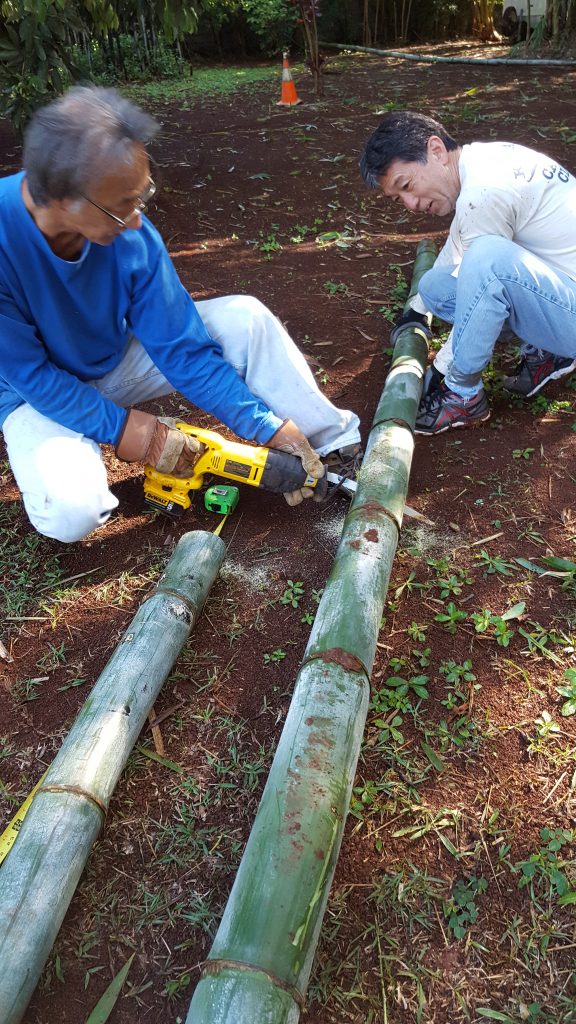 It Could Be Complicated . . . or Not, According to Rick Hoo

Got kadomatsu, or kadomatsu plans? If not, there’s still time to gather the essential pine boughs and other symbolic elements to create Hawai‘i’s essential New Year’s decoration. Kadomatsu, literally “gate pine,” is originally a

Shintö practice, but placing kadomatsu outside homes and/or businesses is largely no longer a religious ritual in Hawai‘i. Rather, it has become a nostalgic, stylish, generationally honored cultural tradition.

Although the tradition of displaying kadomatsu has evolved over time in Hawai‘i, there are those who strive to retain a more genuine form of the symbol.

“All the elements of kadomatsu have spiritual meaning and it could get complicated,” said Rick Hoo, a recognized local authority on the art of kadomatsu. Last year, the Honolulu Museum of Art engaged Hoo to teach on the subject. At his Makiki home recently, he explained the historic roots of kadomatsu in an effort to describe his hope that the genuine symbols of kadomatsu are understood and preserved.

Throughout the agrarian history of world civilization, Hoo said, the evergreen tree has often symbolized life. In numerous cultures, people associated life, hope for the future and renewed bounty with waxy green pine boughs. Through harsh winters, people brought fresh, cheery evergreen into their homes to remind them that life will continue after the snows and that crops would return.

Shintoism, one of the two traditional religions of Japan along with Buddhism, recognizes the “sacred essence” in many natural forms such as rocks, trees, rivers, animals, places, people and even . . . the new year. Kadomatsu arrangements containing pine are placed on either side of a home’s entrance as “signposts” believed to attract and guide Toshigami, the god of the New Year, to the home. It was hoped that Toshigami would inhabit the pine temporarily and bring desirable good fortune. At the appointed time in the closing days of the year, the kadomatsu is erected and, at the appointed day, are removed and
disposed of properly, releasing Toshigami to the spiritual realm once again.

In Japan, the element of bamboo was introduced to kadomatsu during the samurai period. The bamboo in kadomatsu represents positive attributes, but the most meaningful is the hope of attaining higher virtue and strength.

Dramatic emerald green (mosotake) and even black (kurochiku) bamboo quickly attract the eye in a kadomatsu arrangement, “but the pine is definitely the principal, key and, at the risk of being redundant, the critical element of kadomatsu. The three bamboo stalks you commonly see tied with a rope is interesting, but misses the point. The point is the pine. It’s not called ‘gate bamboo,’ it’s called ‘gate pine,’” Hoo said.

Not many Hawai‘i Nisei — and hardly any younger AJAs — are likely able to explain Japanese New Year’s symbols, Hoo said. He described kagami mochi, the double-stacked mochi with the tangerine and green leaf on top — a whole other article in itself — and shimekazari, the small rope made from rice stalks with zigzag-shaped paper strips that is placed on the porch or the entrance door. The kadomatsu is part of this common trio of New Year’s symbols, Hoo explained.

The kadomatsu sold in Hawai‘i stores generally fea- ture large, yellow/brown bamboo, front and center, tied with a dramatic looking rough rope, with pine (some plastic) peeking out from the sides or bottom of the bamboo. For a few dollars more, you might also get some plastic plum blossoms.

It’s a travesty,” said Hoo. “First of all, there should always be two kadomatsu, one on both sides of the external doorways to homes or businesses. Secondly, pine is of utmost importance. The bamboo, never yellow/brown, is truthfully merely a backdrop upon which we hang other meaningful symbols, such as a fan, a bitter orange, a branch of plum blossoms,” he explained. “And please don’t use ironwood. It isn’t even pine,” Hoo said, rolling his eyes. “And plastic anything on a kadomatsu is absolutely intolerable,” he said.

Hoo is half-Japanese, half-Chinese and has been interested in the arts since his youth. His first serious foray into his dual cultural background was via kung fu. A survivor of tournaments fought in Asia, Hoo later found satisfaction in exploring concepts of attaining peace and spiritual healing, rather than inflicting injury. His life naturally crossed paths with various mentors and teachers over the years, and he began to deeply appreciate symbiotic relationships in nature. He taught himself beekeeping, volunteered with the Department of Land and Natural Resources in the Hunter Education Program and is currently a member of the Papahänaumokuäkea Marine National Monument Reserve Advisory Council.

It was through Temari Hawaii in the early 2000s that Hoo first acknowledged the cultural significance of kadomatsu. Temari eventually enlisted the help of the Kuhio Lions Club of Honolulu, of which Hoo is still president, to help produce kadomatsu for households on O‘ahu. It was then that Hoo began to study the New Year’s symbol more deeply.

Hoo later met Sogetsu Ryu ikebana teacher Carol Sakata and became her student. Sogetsu and Sakata helped Hoo to envision the kadomatsu design that the Kuhio Lions Club produces today. Hoo marvels at the interconnectedness of people and events in life that lead to personal insights and growth.

By day, Rick Hoo is a Honolulu hair designer who previously served on the state Board of Cosmetology. His path as a perfectionist in the beauty industry is understandable in this story, but who would have expected that he is just one of about 1,800 master colorists in the U.S. nationally certified by the American Board of Certified Hair Colorists? He is also Hawai‘i’s only certified master hair colorist.

In Japan, while teaching aspiring colorists the latest techniques and also meeting with Japanese Lions Club members, rice field owners befriended him.
For hundreds of years, farmers used kadomatsu to bless their rice crops. Hoo was invited to Niigata and Fukushima, where he was educated in kadomatsu, firsthand. Having attained a relationship-based, purer appreciation and perspective of kadomatsu arrangements, Hoo was compelled to create a purer design for Hawai‘i.

“It’s a blend of the Kansai and Kanto regional kadomatsu styles and leans toward the traditional, but fuses tropical and a bit of the modern world,” Hoo said.

“Kadomatsu style also varies by house size and personal taste. Some houses are large, 10 to 12 rooms, while some apartments and homes are small. There are designs and solutions for all these,” he explained.

The Kuhio Lions Club will be producing kadomatsu to-order after Dec. 13. That date is the matsumukae, or “greeting the pine” day, Hoo explained, when he and his fellow Lions will harvest Hawai‘i Island’s incomparable pine and visit O‘ahu forests to harvest a couple truckloads of approximately three-year-old bamboo stalks.

“We are committed to sustainable harvesting and properly cut the bamboo so we don’t leave little cups throughout the forest to breed mosquitoes. We also aren’t leaving pungee sticks all over the place,” Hoo said, describing conservation standards to preserve the integrity of our islands’ forests and hillsides. The Lions submit permit requests to the DLNR early, he said.

Hoo emphasized that the decoration of homes and businesses should not happen on Dec. 29 or 31, noting that the Japanese consider the number 9 to be bad luck and 29 is double bad luck. Also, putting up decorations on the 31st indicates the homeowner has not respected the tradition on time.

According to Hoo, kadomatsu arrangements can remain up until Jan. 15 of the new year. After Jan. 15, tradition has it that the pine is burned, or discarded in a container with salt. The bamboo is simply discarded.

Hoo’s Chinese father from Honolulu was Yonsei and his Japanese mother from Hawai‘i Island was a Nisei. Hoo grew up American, Japanese and Chinese in Makiki with a worldview that is surprisingly simple.

He hopes future generations of Japanese Americans will carry on their cultural traditions and strive to keep them as vividly genuine as possible, protecting Hawai‘i’s multicultural tapestry.

“Basically, we should respect and appreciate each other’s cultures. We have a beautiful opportunity here in Hawai‘i to enjoy such a bounty of experiences.”

For small houses or apartments, a single floral arrangement is permitted and can be placed inside the dwelling. Use appropriately sized elements and symbols above. Arrange in flat floral receptacle using floral frog and wire to secure elements.

Large (Must be constructed on site, 6 feet)

Note: Mid-size and large can be designed traditional with tropical influence or abstract/modern; order accordingly

Imperial (For condos and smaller homes)

All Kuhio Laion’s Club kadomatsu are made to order. Call (808) 533-2208 or (808) 221-2380 to order. Proceeds from their kadomatsu sales will support the Kuhio Lions Club’s Wags of Aloha Therapy Dog Program at the Honolulu International Airport, its Autism Awareness Project on O‘ahu and Adopt-a-Family Program.