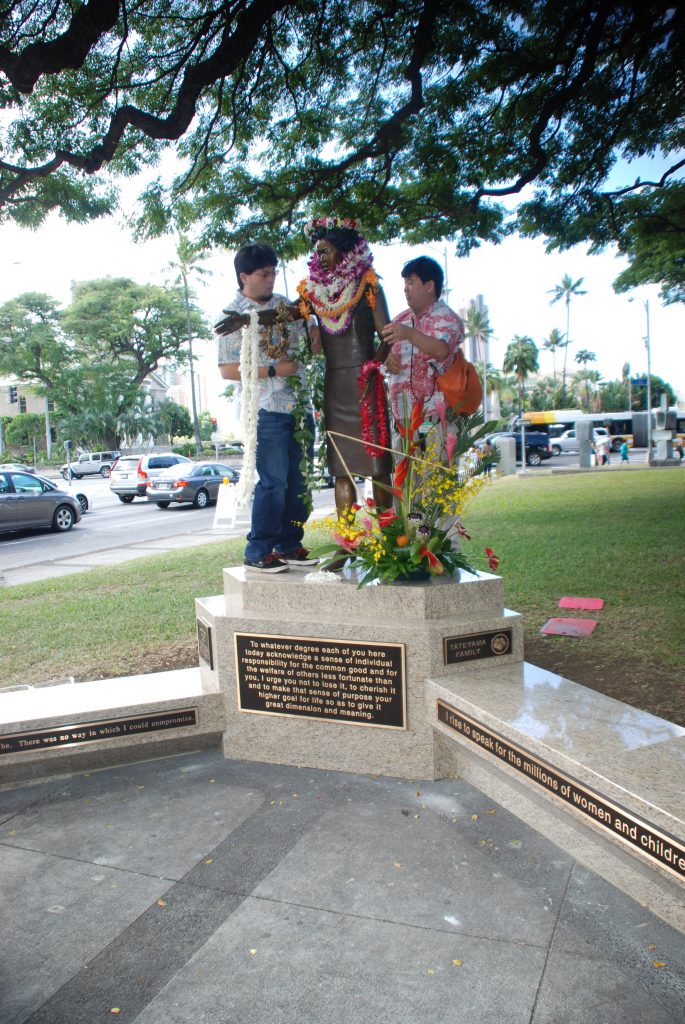 Visitors to the Hawai‘i State Library in downtown Honolulu are now greeted by the newly installed monument honoring the late Patsy Takemoto Mink, the first woman of color — and the first Asian American woman — to serve in the United States Congress. The Maui-born lawmaker’s decades in public service won her accolades as a trailblazing public servant and a champion of social justice. The monument, which is located in front of the historic library building, features both a life-size bronze statue of Mink, as well as a number of plaques with words spoken by Mink at different times in her political career.

Visitors walking or sitting in the area around Mink’s statue, which is elevated several feet above the ground, are able to read her words from a variety of vantage points. It is a timely and fitting tribute to the late congresswoman, especially as more women than ever are stepping forward to serve in Congress in an increasingly contentious political environment that requires both courage and perseverance.

Mink, who died of pneumonia in September 2002 at the age of 74, spoke with clarity and passion about doing what is right and of not being afraid to take controversial and unpopular stands. She was a vocal and early opponent of the war in Vietnam, for example, even though she was criticized and ridiculed by her detractors for being unpatriotic.

“It is easy enough to vote right and be consistently with the majority,” she said, “but it is often more important to be ahead of the majority. This means being willing to cut the first furrow in the ground and stand alone for a while if necessary.” Those words are preserved in one of the plaques.

Another plaque reads: “I believe that there is still hope in our country; that we do not need to be content with mediocrity; that we do have the right to hitch our stars to the heavens and strive for excellence; that we do have the innate goodness to recognize evil and demagoguery and to see that right shall overcome all obstacles and succeed. I believe all this because you are and you must be that hope if this nation is to resemble in your future what it set out to be 200 years ago.”

Although spoken decades ago, her words are as relevant today as when she first spoke them. In that sense, the memorial ensures that Mink continues to inspire the public, reminding the visitor, as another plaque reads, that “I as an individual and you as an individual can make the difference.”

Big Island artist Holly Young sculpted Mink’s statue with funding from the Hawai‘i State Foundation for Culture and the Arts’ Art in Public Places Program. Young told those gathered for the Dec. 6 dedication ceremony on the lawn of the Hawai‘i State Library that all of the quotes selected for the monument are as relevant today as they were when Mink first spoke them. The statue of Mink, Young said, depicts her with an outstretched arm. To some, the gesture communicates welcoming and inclusion. The artist offered a further interpretation: “She’s pointing at you.” It is as if Patsy Mink is asking, “What are you doing today? What are we doing with this government now?” 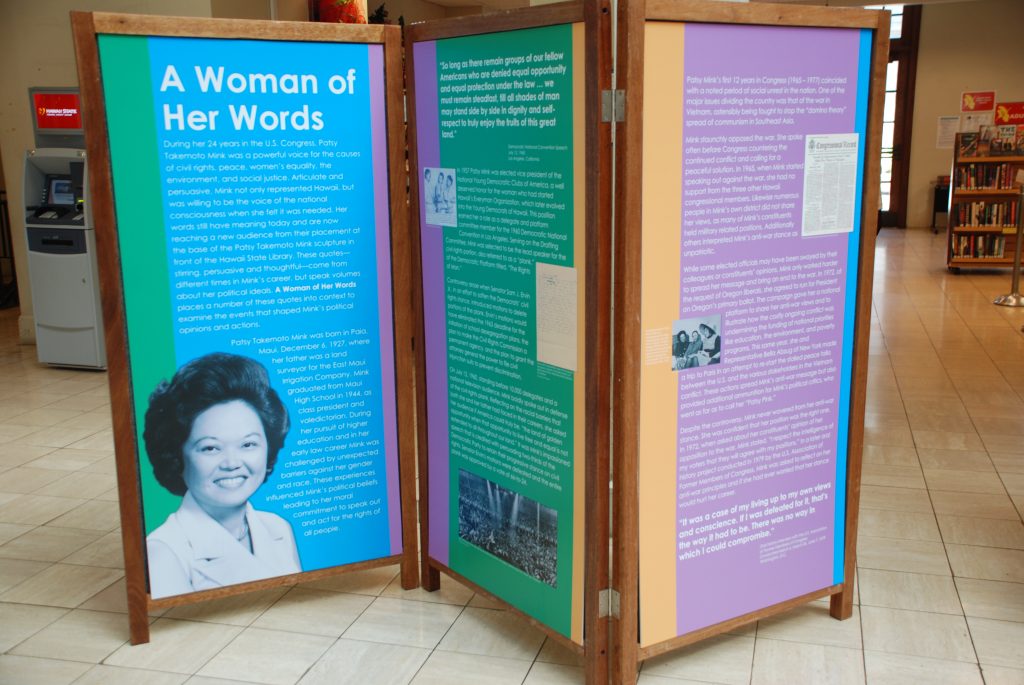 Patsy Mink’s life story has been told elsewhere in more detail and is reportedly the subject of a forthcoming biography by her daughter, Gwendolyn (Wendy) Mink and a co-author. Wendy Mink and other relatives and longtime friends attended the dedication ceremony along with a handful of dignitaries and the general public. Although the biographical note on the base of the statue provides a thumbnail sketch of Mink’s life, visitors who want to know more about her can easily walk up the few steps and into the library, where they will find an abundance of resources, including a lobby display on Mink that will remain up through the end of this month.

One of Patsy Mink’s crowning legislative achievements, for which she was a principal sponsor, was named the “Patsy T. Mink Equal Opportunity in Education Act 1972.” This key line from the federal law reads: “No person in the United States shall, on the basis of gender, be excluded from participation in, be denied the benefits of, or be subjected to discrimination under any education program or activity receiving federal financial assistance.” The law, also known as Title IX, called for equal opportunity in all aspects of education, not only in athletics, which often gets the most attention.

Clearly, equal opportunity in education was one of Mink’s primary concerns. She herself suffered from discrimination in her pursuit of higher education, forcing her to shift her career goal from medicine to law. Her own educational achievements — graduating from the University of Chicago Law School — paved the way for her entry into politics, first at the local level, and later at the national level. She was elected to the United States Congress for the first time in 1964 and served a total of 24 years in Congress.

Given Mink’s advocacy for equality in education, the Hawai‘i State Library site is the ideal location for her monument. The spot is also personally meaningful to Wendy Mink because it is where her mother spent so much time reading to her as a child.

The monument is situated in a spot where people of diverse circumstances tend to sit and relax when not in the library. Mink would likely have been pleased that people from all walks of life remember her. A stone’s throw away are Honolulu Hale and the Hawai‘i State Capitol building, where political leaders for the city and state, respectively, craft laws affecting the people of Hawai‘i. Patsy Mink’s statue stands almost as a sentinel to those currently in office — the power of her words and the memory of her actions challenging them to use their influence for social good and holding them accountable if they do not.

Kevin Y. Kawamoto is a longtime contributor to The Hawai‘i Herald.