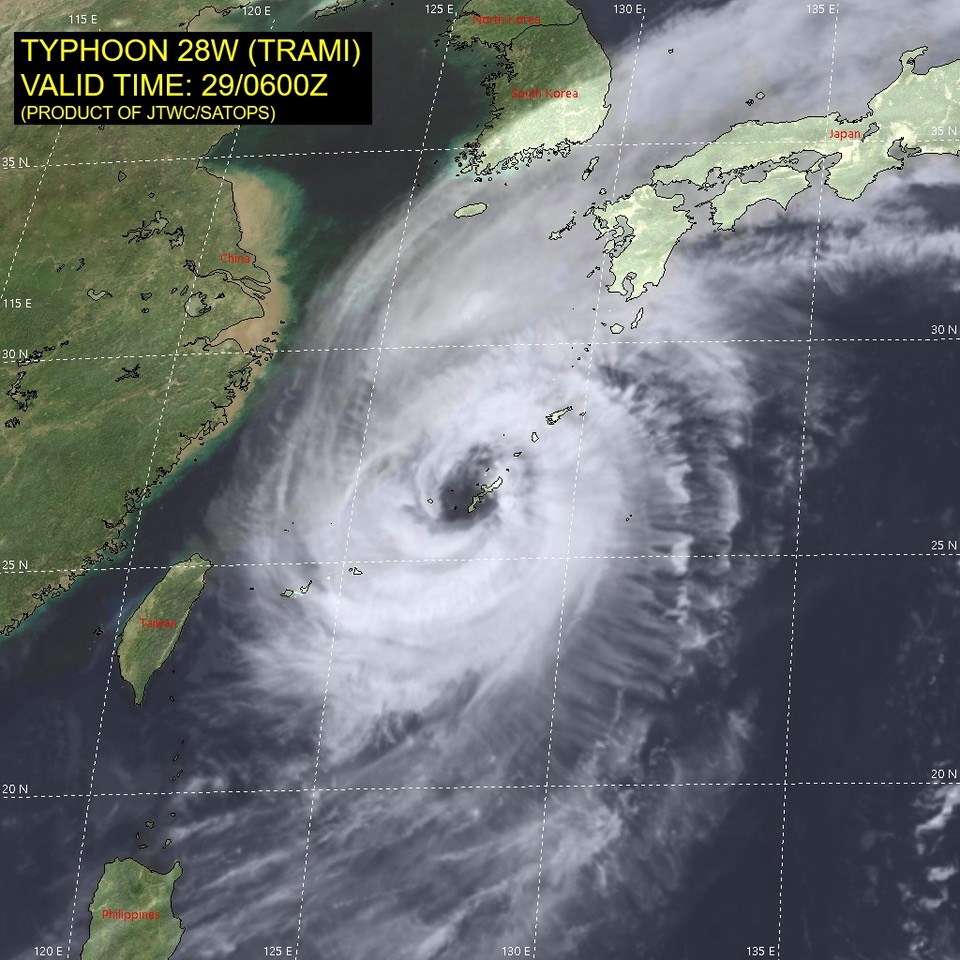 Editor’s note: Hawai‘i’s hurricane season officially ended last week, on Nov. 30, and although we did not experience Hurricane Florence- and Michael-force storms that Mainlanders did, Hawai‘i did not escape completely unscathed. The Big Island of Hawai‘i and Maui were drenched, with Mountain View in East Hawai‘i, receiving a record 52 inches of rainfall.

A typhoon has basically the same weather conditions as a hurricane: strong winds, heavy rain and big surf.

Okinawa is situated in the area of the Pacific known as “Typhoon Alley.” They usually form near Guam and then churn their way northwest toward Okinawa before continuing on north to mainland Japan.

Typhoons hit the area mainly between the months of June and September, forming when the warm surface water from the Pacific Ocean mixes with the region’s high humidity and low, cool winds.

In this “My Hawai‘i” column, Colin Sewake walks us through Okinawa’s encounter with Typhoon Trami.

On Saturday morning, Sept. 29, I woke up at about 5:30 to pretty strong winds outside. The lights in the kitchen and the digital clocks were flickering. I turned on my laptop and went online to check the Kadena Air Base Facebook page and learned that the U.S. military bases had been put in Typhoon Condition 1-Emergency, or TC-1E, meaning all facilities were closed down and personnel were banned from traveling outside the base. Basically, all U.S. military and civilian personnel were ordered to remain indoors, regardless of whether they lived on- or off-base. 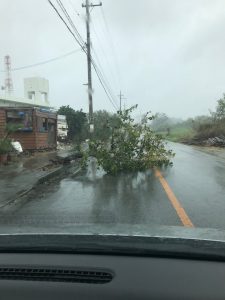 I started to check e-mails and do some computer work when the power went out. I decided to stop typing because I wasn’t sure if the power would be out for a long time and I didn’t want to drain my laptop battery. The power came back on so I started to work on e-mails again, but it went out again so I stopped. This happened 10 times between 5:30 and 7 a.m., when it went out for a much longer stretch, so I gave up and shut down the computer.

The family was still sleeping, so I decided to drive to the Family Mart in Nagahama, located on Highway 6 on the upper section from my house. The winds were really strong and pushed against the large surface areas of my van, making it difficult to drive straight. After picking up a breakfast sandwich and a drink, I drove down to the park near Cape Zanpa. The access gate had been closed for safety reasons. Several people died in the past — they got curious and walked all the way down to the cliff line where they were knocked over by the huge waves and swept out to sea. I parked my van near the giant shiisa lion sculpture and checked out the winds and rain whipping from east to west.

After a few minutes, I decided it was time to head home and hunker down indoors. As I drove back up towards Highway 6, I came across a tree that had blown over. The gusts were strong and shook my van. The entire area was drenched.

As I approached my house, I found more branches that had broken off and were being tossed about by the winds. I also came across someone’s empty fiberglass water tank that had rolled up against a bed-and-breakfast place next to my house.

Keiko woke up shortly after I got home and wanted to get the latest update on the typhoon. Since the power was out, we took her car and drove to the top of the hill to get good reception on the television mounted in her dashboard. I also used the opportunity to charge my iPhone since the car engine was running. Once Keiko got the latest update from the Japanese news, we headed back home.

Our house is made of concrete, like most of the houses and structures here, so I’ve never experienced major damage to our home or property. The most damage I’ve incurred was when high winds blew in a panel of a prefabricated storage unit I had in the early 2000s. That caused the wind to rush through the inside and unhinge one of the doors. That caused other panels to bend and warp, so I ended up throwing away the storage unit. On another occasion, a banana tree that was just beginning to bear fruit was knocked over, so I had to cut it at the trunk and throw it over the wall into the bushes below our property. The same thing happened the following year with another banana tree that had started to bear fruit. I got frustrated and gave up on growing bananas so I wouldn’t go bananas.

It’s common for Nagahama to experience power outages during typhoons so I expect it to happen once the winds reach a certain speed. It’s more inconvenient than anything else for us to be without electricity. Here are examples of what is not affected during a typhoon:

• Cooking, since we use propane gas.

• Regular tap water flow, because we live in a house. An apartment requires water to be pumped to upper floors.

Here are examples of what is affected, besides no lights and use of the refrigerator.

• No hot water to shower or to wash oily dishes. Our water tank uses kerosene and is powered by electricity.

• No air conditioning, so humidity builds up in the house.

• No WiFi or landline phone use.

I thought you might be interested in seeing Typhoon Trami’s track. This satellite photos from the Joint Typhoon Warning Center’s webpage (http://www.metoc.navy.mil/jtwc/jtwc.html) shows Typhoon Trami directly over Okinawa on Sept. 29 at 3 p.m. (Japan Standard Time) and give you a visual idea of the storm’s track and size. During storms, the site is updated with images every few hours and then deleted once the storm passes.

The eye of Typhoon Trami passed over Okinawa island on Saturday afternoon, so we had a period of calm for about four to five hours before the winds picked up again. The first half of the storm was much stronger than the second half. By bedtime that night, we were still in the dark with no electricity.

I attended church the next day and found that the strong winds had knocked over a large pine tree on the church property. Granted, the tree was old and the roots didn’t seem to go too deep, but the photo should give you an idea of how strong the winds were if they could knock down such a large tree.