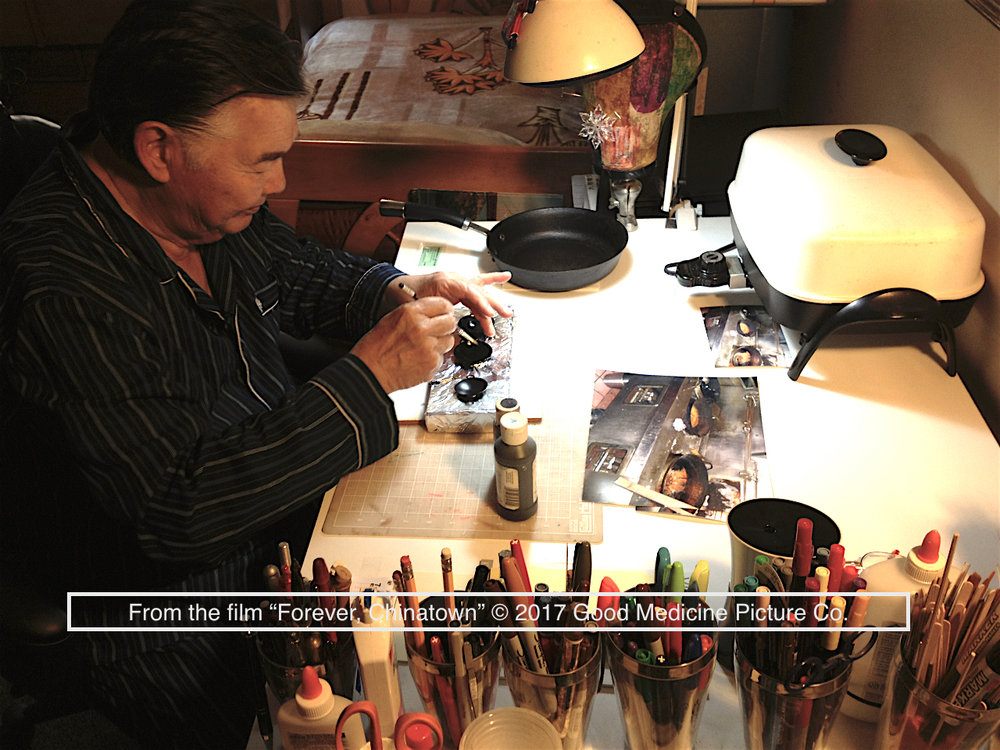 A Sweet Homage to Memory

Memory is a curious companion. It is an internal movie that captures the past, not as it was, but as we wish it to be. It is our own Hollywood production. It is a fickle river that is part fact and part fiction as it flows toward eternity.

Frank Wong knows all about memory. He spends most days trying to capture its fleeting shadow in his Union Square apartment.

“Recently, I’ve had trouble remembering things,” smiles the unsinkable Wong. “I want to capture my memories and the only way for me to do that is to make them in three-dimension.”

With all of his family gone, the 86-year-old bachelor began to recreate in miniature the San Francisco Chinatown of his childhood — when it stretched over five city blocks and never seemed to sleep. Using fabric, wood, paper and glue, Wong meticulously reconstructs a life that has long ago disappeared or may have only existed in his imagination.

At its height, San Francisco’s Chinatown was home to thousands of Chinese immigrants who had come with dreams of gold and freedom only to encounter the reality of 19th-century America. Frantic, colorful and overcrowded, Chinatown was a de facto internment camp that allowed the Chinese to be readily available as a source of cheap labor, but separate from the American mainstream.

Filled with apothecaries, single-room occupancy apartments, barber shops and ethnic markets, it became a sanctuary for Chinese immigrants who could escape the discrimination and hatred of the outside world that surrounded them.

Within Chinatown, immigrants could speak their own language, browse through familiar shops, socialize with friends and be human. Initially seen as a temporary stop for Gam Saan Haak (travelers from China hoping to strike it rich mining for gold) heading to the gold fields, it became over time a center for tourism, extended families and children.

“Growing up in Chinatown in the ’40s and ’50s . . . there was nothing like it,” recalls Wong as he works over a tiny metal cap that he plans to reincarnate as a well-used wok. “It really was a city within a city.”

For Wong, Chinatown was a gilded menagerie of beehive apartments, neighborhood shoeshine stations and womb-like kitchens that, despite their shared commonality, hid an unforgettable timelessness. The poetry of Wong’s art is in its detail: His Lilliputian world feels lived in, as if its residents have just left to go to work or stepped out for a pack of cigarettes at the corner drugstore. Working on a scale of one inch to one foot, Wong first focuses on a single item, such as a favorite chair, a wooden rolling pin or a beloved family heirloom, then branches out from there like a child of a lesser god rebuilding the Garden of Eden. Disappearing into the recesses of the San Francisco Public Library’s Chinatown branch while perusing through ancient copies of Sears catalogs, Wong is passionate about maintaining the accuracy of the long-forgotten popular commodities that appear in his reproductions.

Born in Los Angeles and raised in San Francisco, Wong worked as a prop master for Metro-Goldwyn-Mayer and several other major Hollywood studios.

“I had to kiss a lot of ass and work twice as hard as the next guy, and you know why,” sighs Wong. “How would you like to answer your door and be mistaken for a house boy, or attend a party and be told to get someone a drink. After awhile you feel the hurt. The only way to deal with that is to be angry, and I don’t want to go there.”

Instead, Wong relocated to Hawai‘i, where he lived for decades until his return to California in the late 1980s. His miniatures, which began as a whimsical hobby, grew into a place of refuge that would provide not just distraction but salvation.

Tipped off by a friend, Los Angeles filmmaker James Q. Chan wandered into the San Francisco Chinese Historical Society, which was hosting a celebration of Wong’s work in its small gallery space. Chan saw Wong’s dioramas as portals into a lost world and was inspired to create “Forever, Chinatown,” a 32-minute documentary about the unknown, self-taught artist. The award-winning movie that premiered in 2016 — and was screened at the 2017 Hawaii International Film Festival — is a gentle tribute to the broken-hearted and forgotten wanderers who struggle to fit into a world where they don’t quite belong.

Wisely, Chan knows enough to avoid cluttering his film with too much exposition and lets the impossible images of Wong’s three-dimensional shoebox universe fill the screen.

“In my culture, a person’s possessions are burnt at the time of his death so that he may enjoy them in the afterlife. For a long time I wanted my miniatures to be burnt at my death so that I could live in them forever,” smiles Wong. “But now when someone sees my grandmother’s kitchen, people remember her. Isn’t that better than burning them?”

As Wong works quietly in the soft twilight of another Bay Area summer day, San Francisco’s Chinatown is already being torn down to make way for the new. Skyrocketing land values and the gentrification of older neighborhoods will soon erase whatever is left of Frank Wong’s past.

“Memories get fuzzier and more beautiful as time passes,” concludes Wong, gently. But what he leaves unsaid to float away in the darkening air is that it doesn’t mean they aren’t still true in their own special way.

The trailer for “Forever Chinatown” can be viewed at www.foreverchinatown.com, where the DVD can also be purchased.