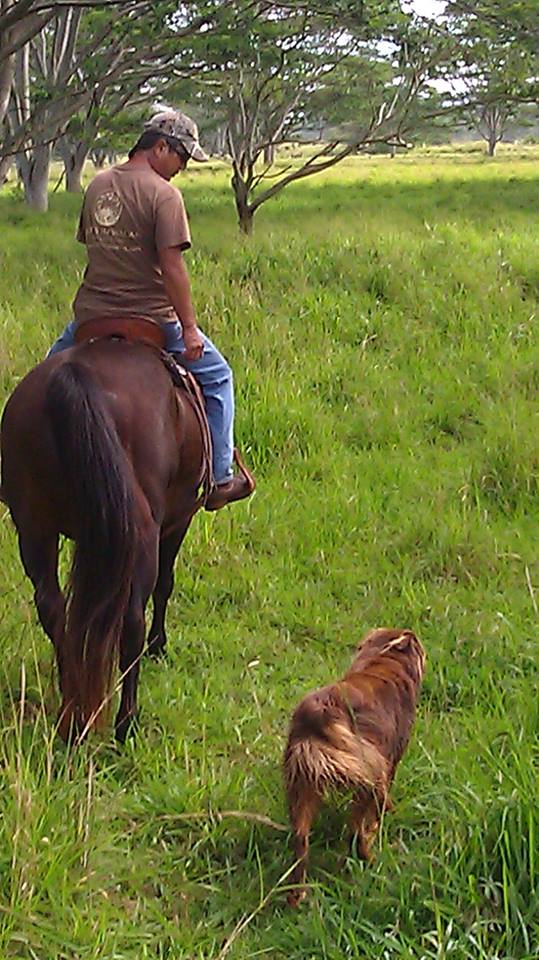 Writer Experiences Riding a Descendant Breed of a Mongol Warhorse

As a volunteer ranch hand and a horse owner, I was intrigued to read in George Kerr’s book, “Okinawa: The History of an Island People,” that the Ryukyu Kingdom traded trained horses with China from the late 1300s to the early 1600s. Why, I wondered, was a kingdom that was just a tiny archipelago trading horses with one of the world’s oldest civilizations and one of its biggest countries that was part of the largest continent on earth? It also seemed incongruous that the tropical islands of Okinawa would have had a horse culture. So many questions, but the most burning of all: What were the origins of these horses?

Some quick research told me that descendants of those horses still exist in Okinawa today. And, after seeing photos of them, I was fairly confident of their origin. But how and when did they find their way to Okinawa? These questions warranted a deeper look.

Science confirmed that these horses originated from the Mongolian steppe — the Mongolian-Manchurian grassland ecoregion. History suggests that they were probably brought to the Ryukyu Islands by Mongols. They were used as riding horses and for light draft work. The breed is believed to be largely unchanged from the time of Genghis Khan. Over the centuries, however, these horses of Okinawa had to evolve and adapt to a life and environment less demanding than one on the Mongolian steppe. The horses, which are short like ponies, and sturdy, bare the name of the island on which they were born, primarily Okinawa’s neighboring islands of Yonaguni and Miyako.

Genghis Khan built his vast empire with an army of skilled horsemen and these tough, sturdy and agile warhorses. Although short in stature, these horses allowed Genghis Khan’s cavalry to ambush and deploy a hit-and-run tactic and wave attacks. In just 25 years, Genghis Khan and his loyal army conquered more land and people than the Romans did in their 400-year rule. His grandson Kublai Kahn, who eventually came to power, continued to conquer and expand the empire that his grandfather had amassed.

In 1292, Kublai Khan ordered King Eiso of Ryukyu to submit to the Mongol authority and to contribute to his expedition to invade Japan. This was a “David versus Goliath” confrontation. Like the legendary David, the undaunted King Eiso rejected Kublai Khan’s demand. Five years later, envoys from the Mongol court returned with new demands that were again rejected. This time, the envoys exerted force, but were driven off. In their retreat, the Mongols captured some 130 Okinawans.

In 1429, King Sho Hashi unified the three principalities of the main Ryukyu island: Hokuza (northern), Chuzan (central) and Nanzan (southern). In recent times, an archaeologist unearthed a critical mass of horse bones in the central part of Okinawa. Chuzan was ruled by Sho Hashi prior to his unifying the three principalities. The evidence suggests that like the Great Khan, King Sho Hashi may have had a cavalry of his own.

Like many horse lovers, the horses of the Mongolian steppe had long captured my imagination. I wanted to ride this ancient breed and get a sense of what those early Mongol and Ryukyuan horsemen had experienced.

In October of last year, a friend arranged for me to ride a Yonaguni at the Umikaze Horse Farm in Tamagusuku during a trip to Okinawa. At home in Hawai‘i, I ride a tall American Quarter Horse at the ranch where I volunteer. My horse, Kili, probably weighs twice as much as the Yonaguni. And, sitting in my saddle on Kili, I’m about five and a half feet off the ground, whereas I was less than four feet off the ground riding the Yonaguni.

The Umikaze Horse Farm offers two riding options: one on the shoreline and the other in the ocean. Although I was within the weight limit, I still felt guilty about getting on the much smaller Yonaguni horse. It cost me more, but I chose the ocean ride, thinking the buoyancy would put less of a strain on the Yonaguni. Although the ride was scheduled for 45 minutes, I decided to cut it off at 30 minutes out of concern for the horse. Still, the ride gave me the chance to experience this descendant of a warhorse and imagine its history.

I knew my money was going to a good cause. You see, the owner of the horse I rode has a degree in animal science. She, too, believes that these horses were brought to the Ryukyus by Mongols. She and her professor and mentor, along with a handful of other individuals, are trying to conserve the breed. Her professor retired to the island of Yonaguni, which is in the Yaeyama island group of Okinawa and the westernmost inhabited island of Japan (situated 67 miles off the eastern coast of Taiwan). On Yonaguni Island, the professor cares for approximately 40 horses.

The owner of the horse I rode own six horses — a few more are scattered throughout the islands of Okinawa. The Yonaguni and Miyako are extremely rare and are of great antiquity. In fact, in Yonaguni, they are considered a “Natural Monument.” The Government of Japan has designated the Miyako as “Critical-Maintained,” because at last count, there were fewer than 20 in existence.

As I rode the Yonaguni, I was overwhelmed knowing I could be riding a breed of horse that is on the brink of extinction — a breed that lived through nearly eight centuries, in periods of prosperity, famine, peace and war. The responsibility of keeping the breed alive must weigh heavy on those who have taken up the cause. If you are considering going on one of these rides in Okinawa, please be sure that it is with an operator who is working to perpetuate the breed.

A Hawai‘i Uchinanchu who recently had her DNA tested told me that Mongolian ancestry turned up in her genetic profile. This leads me to believe that the Yonaguni and Miyako horses are living symbols of that heritage. Moreover, these rare horses provide a window into the saga of the great Mongol overlord, Kublai Khan, in the history of Okinawa.

One final thought. On the day I rode the Yonaguni, there was a young teenager assisting the owner. She volunteers because she loves these horses . . . which left me hopeful that this ancient breed will survive if more young people like her can be exposed to these horses and inspired by their story.

Dan Nakasone is a Sansei Uchinanchu from Wahiawä. He is a marketing and advertising professional and most recently served as a producer/researcher for PBS’ award-winning food and culture series, “Family Ingredients,” which is based in Hawai‘i and hosted by Chef Ed Kenney.