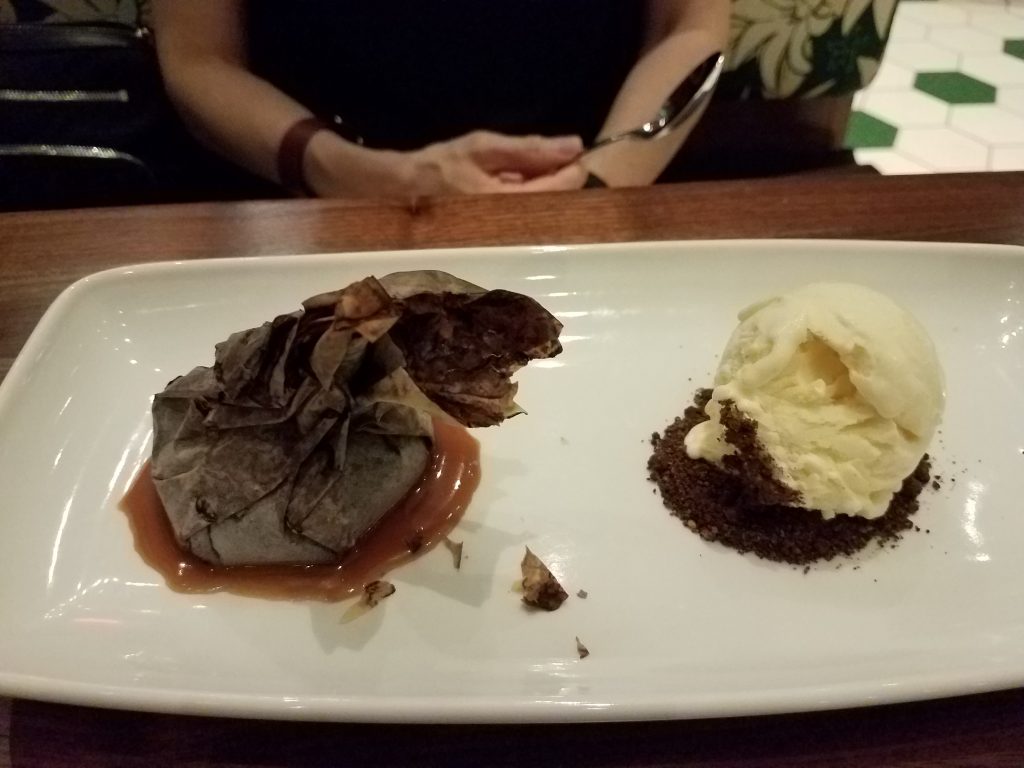 The local food movement known as Hawaii Regional Cuisine started almost 30 years ago. Some of its principals are just as well-known today as they were back in the day. For example, if you told a colleague that you planned on sampling the cuisine of a chef named Roy, nearly every islander would know that you were referring to Chef Roy Yamaguchi. Likewise for the chefs named Alan and Mavro.

A few of the original “gang of 12” changed courses: Chef Philippe Padovani is now known mainly for his chocolates, and Chef Sam Choy who recently opened Pier Nine, featuring Hawaii Regional Cuisine at Hawaii Pacific University’s Aloha Tower campus. A few chefs are still active in the kitchen, but aren’t as high profile because they reside on the neighbor islands, like Chef Beverly Gannon of Maui, Chef Jean-Marie Josselin of Kauai and with Chef Peter.

Chef Peter Merriman isn’t a household name in Pacific Rim cuisine. Maybe it’s because he was born and raised in Pennsylvania and his first restaurant was tucked away in Waimea on Hawai‘i Island. In the last 10 years, we’ve dined at several of Chef Merriman’s restaurants and have always enjoyed the food, service and ambiance.

The only place we hadn’t tried was his original Waimea restaurant, which he opened in 1988. Location was the main reason we hadn’t tried it. When we visit the Big Island, we usually stay at the Mauna Lani Bay Hotel & Bungalows, where Chef Merriman got his start in the 50th.  An early evening drive to Waimea, which in itself is nerve-racking with its narrow lanes and many S-curves, is especially scary at night because there are no streetlights. I’m sure those 18-wheelers aren’t making deliveries at night, but add a few glasses of wine with dinner and a cocktail or two and you get the picture.

Years ago, when I attended my first Kapalua Food and Wine Festival, we dined at Merriman’s in Kapalua. Maybe it was because our table overlooked the oceanside deck, complete with a firepit, or maybe it was the service we received from our server and the general manager, or maybe it was just the food — local produce, proteins and fruit and the opportunity to create your own “mixed plate.” It was such a great experience that we returned the following night after the grand tasting at Kapalua for a second round. 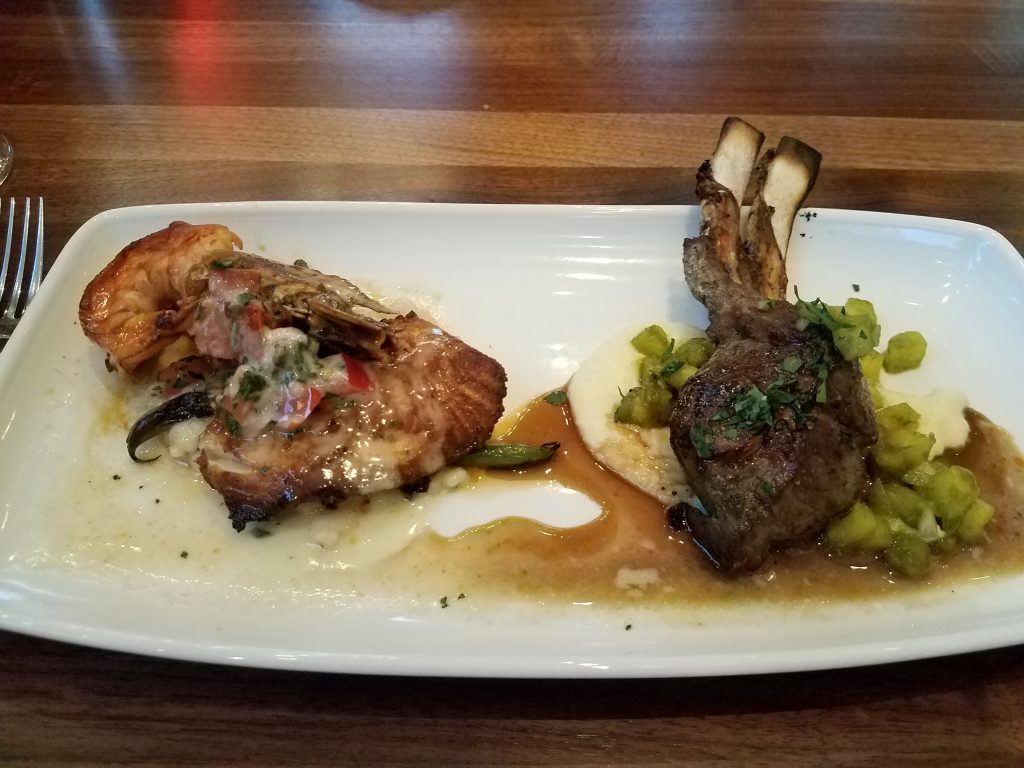 Some 20 years after opening his restaurant, Chef Merriman partnered with Handcrafted Restaurants to open several Monkeypod Kitchens (Wailea, Ko Olina and Kä ‘anapali), along with Moku Kitchen in Kaka‘ako, whose specialty is pizza made with locally sourced proteins and produce and beer. Since Kaka‘ako is as close as “downtown” gets to Käne‘ohe, we’ve visited Moku Kitchen several times for their great pizzas with crusts that have been aged for three days, Szechuan stir-fried green beans and garlic truffle oil fries. You can also dine at Moku Kitchen with your OpenTable cash rewards. And, if you get there during “happy hour” — between 3 and 5:30 p.m. — the cocktails, beer, pizza and several appetizers are discounted between $2 and $7. Dine on great food with beverages using OpenTable rewards at reduced prices and win, win, win!

Since we had never sampled Chef Merriman’s cuisine at its original location in Waimea, we decided to try his newly opened restaurant in Kaka‘ako. Although we had enjoyed our meals at Merriman’s Kapalua, an encore required round-trip flights for two to Maui. Add a rental car for that long drive from Kahului to Kapalua and a stay at any of the resorts in Kapalua and that will set you back quite a bit. But if we can experience the same food in Kaka‘ako, well, that’s only a nine-mile drive over the Ko‘olau Mountains.

Merriman’s Honolulu is situated at the corner of Auahi and Kamake‘e streets, where Pier 1 Imports was previously located. The restaurant is part of the Anaha condominium complex, but don’t drive up to the valet, which is only for Anaha residents. Free parking for Merriman’s Honolulu is located behind the building off of Queen Street. You can either park on the first floor in the Anaha parking lot or use the Pier 1/Nordstrom Rack parking, which is a short one-block walk from the restaurant.

We had planned on starting with a round of cocktails, but as you are being seated, the server pours you a complimentary glass of Prosecco (Italian sparkling wine). I then selected the Kinako Sour cocktail with Suntory Toki whiskey, sweet vermouth, orange bitters, kinako-maple and lemon juice shaken with an egg white. The Mrs. selected the No Ka Oi with local Ocean vodka, Thai basil, lime and honey-lilikoi and also shaken with an egg white. Both cocktails were refreshing and paired nicely with the “Smokin Oysters” on the half shell — local Kualoa oysters in a shallot-black pepper mignonette and served under a glass cloche bathing in smoke, which added smokiness to the mignonette while still allowing the rich flavor of the raw oysters to shine.

We also sampled the House Made Bread Taster with sprouted rye, country bread and buttermilk jalapeno-cheddar drop biscuits with local Waimea churned butter. I had to keep reminding the Mrs. to save space for dinner, even if all three breads alone were a great course. We ended our appetizers with the Tako & Country Bread, which is Chef Merriman’s interpretation of the classic French escargot with morsels of tender tako broiled with the classic garlic and parsley butter. It’s a good thing I saved some of my bread to dip into the rich garlic butter!

We both opted to do the mixed plate for our entrees. Merriman’s offers 10 different selections. You can choose a full serving, or a half-serving of two different selections from seven of the 10 main courses. I selected the half-portion of the rack of lamb and the Kona kampachi. The Mrs. selected the USDA prime filet mignon and the house-made cavatelli pasta with truffle oil. My lamb was perfectly cooked medium rare and the kampachi was the perfect surf-n-turf partner with a buttery richness to the earthy, meatiness of the lamb. The Mrs. said her rich pasta course was just the right portion — any larger and she wouldn’t have been able to finish it. It was also a better starch pairing than potatoes or rice would have been. We also shared a side of Fried Yukon Gold Potatoes . . . don’t tell my internist, but they were fried in beef tallow (rendered beef fat) and tossed with rosemary, garlic, Parmesan and truffle oil. Just as good as those Johnny Aloha potatoes served at The Whole Ox Deli back in the day.

I finished my meal as I usually do, with a shaken Negroni. The Mrs. stretched her stomach just a little bit more with the Molten Chocolate Purse, which was way better than your basic molten chocolate cake with a rich, bittersweet chocolate interior wrapped in what appeared to be cocoa infused filo dough on a rich caramel sauce. It was served with a side of vanilla ice cream.

No matter how full I am at our next visit, I’m ordering one of those just for myself. I can always shake a Negroni at home . . .