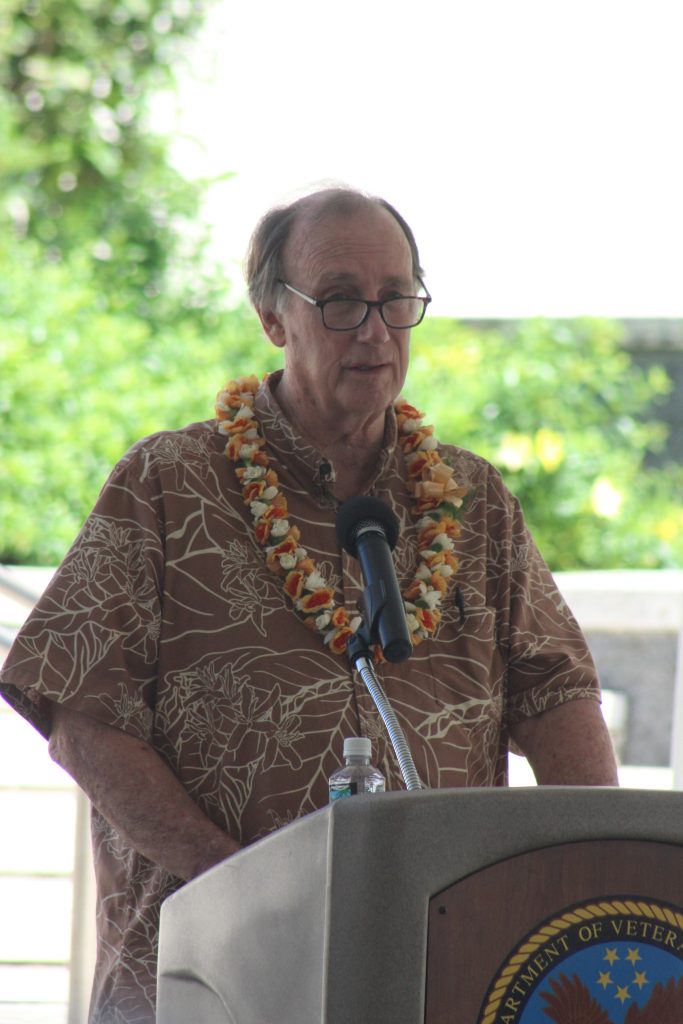 Editor’s note: Historian, author and documentary filmmaker Tom Coffman was the keynote speaker for the 13th annual Joint Memorial Service, organized by the Nisei Veterans Legacy. The service was held Sept. 30 at the National Memorial Cemetery of the Pacific at Punchbowl and was attended by approximately 15 World War II AJA veterans. It was emceed by retired U.S. Air Force Maj. Lawrence Enomoto, the eldest son of Military Intelligence Service veteran Gulstan N.T. Enomoto of Maui.

The Joint Memorial Service was previously organized by the AJA Veterans Council, made up of the four World War II AJA military units: the 100th Infantry Battalion, 442nd Regimental Combat Team, Military Intelligence Service and the 1399th Engineer Construction Battalion. They designated the last Sunday in September for their annual memorial service because it was the Sunday closest to Sept. 29, 1943, the day Sgt. Shigeo “Joe” Takata of the 100th Battalion was killed in action in Italy, becoming the first AJA soldier to be killed in action.

Keynote speaker Tom Coffman has researched and written extensively on the World War II era in Hawai‘i for decades. The former chief political reporter for the Honolulu Star-Bulletin, Coffman has written numerous books, including the seminal “Catch a Wave: A Case Study of Hawai‘i’s New Politics,” “I Respectfully Dissent: A Biography of Edward H. Nakamura,” on the late Hawai‘i Supreme Court Justice Edward H. Nakamura, a 442nd veteran; and “How Hawai‘i Changed America,” among others. Coffman’s latest book, “Tadaima! I am Home” is due out soon from the University of Hawai‘i Press. He continues to work on the second volume of “How Hawai‘i Changed America.”

The Hawai‘i Herald thanks Tom Coffman for allowing us to share his speech with our readers.

All the people, all the time

In the solemnity of this memorial, we honor and we mourn, and we set aside a time to connect ourselves with one another.

I’m from a small town in the state of Kansas, born in 1942, which was the year the 100th Battalion shipped out of Honolulu Harbor. My father went off to war in 1943, which was, as you know, the year the 442nd mobilized. My first clear memory was at the train station, running to welcome my father home. Next came a visiting native Hawaiian couple who had befriended my father during his service here. At age 8, I watched “Go for Broke” at the local movie house. And that really made an impression.

Just out of journalism school I migrated to Hawai‘i and in writing about politics I became acquainted with many 100th Battalion/442nd combat team veterans. Several became mentors and others, friends.

So when I say it is an honor to speak today, it is with a sense of coming full circle.

In Stacey Hayashi’s updated version of “Go for Broke” and my documentary “First Battle,” we have tried to keep alive the memory of the visionary interracial movement that preceded the war: the Charles Hemenways, the Shigeo Yoshidas, Hung Wai Ching, John Burns and their Council for Interracial Unity.

Many months before Japan’s attack on Pearl Harbor, this network resolved, in the event of war, to prevent a mass internment of Hawai‘i’s Japanese community and to maximize participation in the war effort. Council members came together across ethnic lines, most prominently through the public schools, the University of Hawai‘i and the YMCA.

The territorial government had an integrated, multiethnic National Guard, which was a result of the Reserve Officer Training Program, begun way back in 1923 in Hawai‘i and also a result of the peacetime draft of 1940 and 1941.

Much to the point, no such web of interracial relationships had developed on the U.S. West Coast, or elsewhere.

It has occurred to me that following December 7th, if Hawai‘i had been allowed to continue on its prewar path, it would have contributed a racially integrated fighting force to the national war effort.

It was federal pressure that turned the young Japanese Americans out of the Territorial Guard. Similarly, it was the federal government that separated out 14-hundred Japanese Americans from the National Guard units to form the 100th Battalion. In the archives I find that, as this was happening, Hung Wai Ching and Shigeo Yoshida took a hurried community survey. They advised the martial law government that people wanted to keep the multiracial Guard together; they wanted everyone to serve together; and particularly Japanese parents feared their sons might not only be segregated but put into work camps, or interned.

Once organized, two things stood out, at least for me, in the life stories of the soldiers. One was their strong spirit — [they were] curious, adventurous, outgoing and if need be, feisty. Second was a fervent belief in the promise of democracy, even if territorial Hawai‘i was far from democratic. It was the vision that counted.

In the invasion of Italy, the Hawai‘i outfit, by any ordinary standard, would have gotten lost in the shuffle. It was a part of an Army corps, which was part of a division, which was in turn part of the Fifth U.S. Army, which, in turn, was part of the 15th Army Group, or simply, the Allies. The Allied army in Italy was a wondrous conglomeration, foreshadowing the United Nations, consisting of not only Americans, British and Free French, but also Canadians and Algerians, Gurkha warriors and Jews from Palestine, and literally dozens of others engaged in fighting the Axis. And among the U.S. ethnic units were African Americans, Mexican Americans and Japanese Americans.

The 100th Battalion/442nd was only several thousand men at strength in an army of hundreds of thousands. Yet, in the horrendous conditions of the Italian campaign they rose to the top. Assaulting the hardened defensive lines of the enemy, where others fell back, the 100th/442nd made breakthrough after breakthrough. They became the tip of the Allied spear. American generals, desperate for soldiers who would attack relentlessly, jousted with one another for command of this comparatively small outfit from faraway Hawai‘i.

There is, of course, much more to this narrative: the battles in the Vosges Mountains of France and the return to Italy, and on the other side of the world, the Japanese-language Military Intelligence Service was playing its own legendary role in the war against Japan.

It is less well known that wounded veterans were serving on the home front, addressing crucial issues of the day. From his hospital bed, Captain Jack Mizuha wrote impassioned letters advocating for postwar veteran programs, including a letter to first lady Eleanor Roosevelt, who invited him to the White House for tea and an exchange of ideas.

Spark Matsunaga was wounded in Italy, then gave hundreds of testimonial talks across the United States to persuade employers to hire Japanese Americans who were being released from the camps.

Thomas Taro Higa of Kahalu‘u spoke in 40 states. At the infamous Manzanar camp, he drew a crowd of 28-hundred people. An interned Japanese history professor wrote that, for the first time, the Issei audience fully understood why the Nisei had gone to war.

Such work underscored the U.S. government’s urgent need to minimize the divisions set in motion by the forced evacuation and incarceration. What remained of the triumphant combat team sailed into New York Harbor on July 4th, 1946.

The war correspondent of the Honolulu Star-Bulletin, Lyn Crost, wept uncontrollably at the sight of shouting crowds and waving flags. “I have learned that we are dependent on each other,” she wrote. “The future will be based on the ability of our diverse races, religions and cultures to weave an understanding that will rise above the inevitable conflicts.”

The troops laid over until a parade could be organized in Washington, D.C., where crowds again lined the streets. President Truman’s purpose was clear. “I can’t tell you just how much the United States of America thinks of what you have done.” And then his now-familiar words. “You fought not only the enemy, but you fought prejudice and you have won. Keep up that fight, and we will continue to win, to make this great republic stand for just what the Constitution says it stands for: the welfare of all the people, all the time.”

The first battle was over. The second battle was about to begin. Truman’s call was for America to transform itself. Citing “valor and loyalty,” he recommended to the 1946 Congress that Hawai‘i be made a state. Soon thereafter he issued an executive order setting in motion the integration of all the United States armed forces. Surely, he was emboldened by the performance of the Nisei soldiers.

When the main force of the combat team at last returned home, the message of far-reaching change seemed everywhere, written large. Political and social battles lay ahead, but the surviving film captures an ecstasy of people floating on air, as if a new Hawai‘i already had emerged.

The high level of intentions and the rapid pace of resulting reform and innovation can only be understood in the context of the thinking of the Council for Interracial Unity, the many bull sessions of the soldiers, the famous letters between home front and battlefront, and finally in the Japanese American conferences planning for the postwar that took place on all the major islands in 1943, 1944 and 1945.

These ideas won out in the historic 1954 election. For perspective, consider that while the 1955 Democratic Legislature of Hawai‘i was passing a raft of progressive laws, the national civil rights movement was just barely getting started.

Dr. Martin Luther King traveled to Hawai‘i in 1959 and addressed the first session of the Hawai‘i state Legislature.

“We look to you for inspiration,” Dr. King said. “You have accomplished in the area of racial harmony and racial justice what we are struggling to accomplish. You can never know what it means to those of us caught for the moment in the tragic and often dark midnight of man’s inhumanity to man, to come to a place where we see the glowing daybreak of freedom and dignity and racial justice.

“We are seeking to free the soul of America and we look to this great new state in our union as an example.”

President John F. Kennedy used his visit to Hawai‘i in June 1963 similarly, to advocate for his civil rights bill. “Hawai‘i,” he said, “is what the rest of the world is striving to become.”

Hawai‘i came to be viewed as the most progressive state of the union, and sometimes criticized for being the most progressive state in the union. Nationally, Hawai‘i’s congressional delegation had an impact far out of proportion to its small size in the areas of civil rights, labor law, the environment, equal rights for women, civil liberties and making immigration color blind.

Behind the scene, Hawai‘i’s senators laid the groundwork for the U.S. apology and reparations to the victims of the wartime evacuation and incarceration.

What was at work here? And what is at work?

The legacy of people who worked across ethnic lines.

The belief that it was possible to build a real democracy.

No one loses, everyone becomes more fully human.

Thank you and aloha.