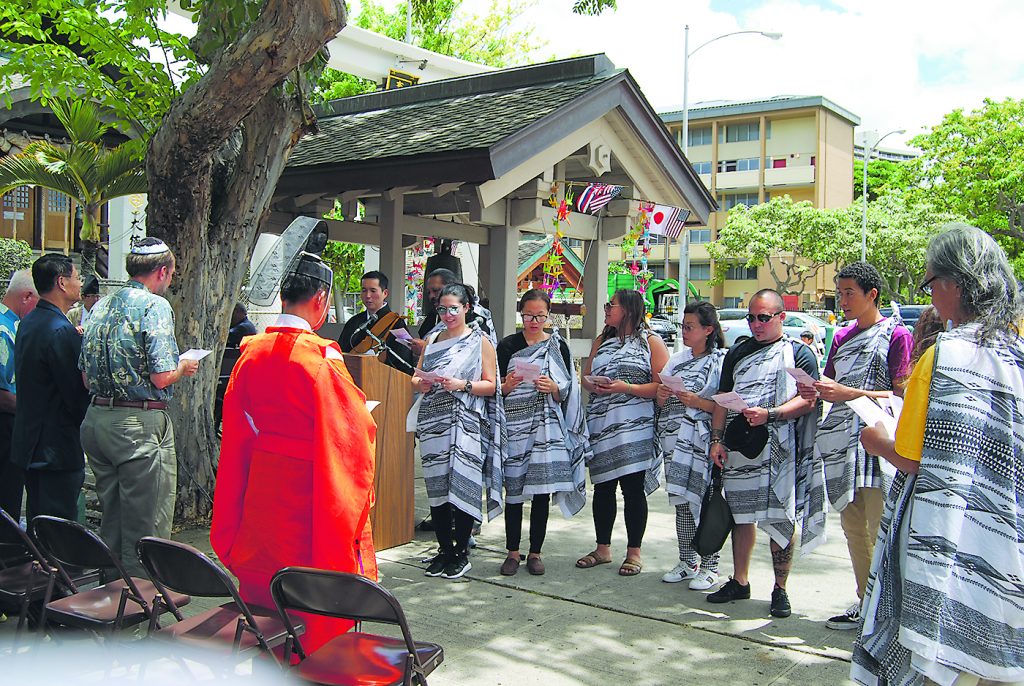 The 73rd anniversary of the atomic bombings of Hiroshima and Nagasaki were commemorated last month with two peace ceremonies on their respective anniversary dates.

The bombing of Hiroshima on Aug. 6, 1945, was remembered in a ceremony at Izumo Taishakyo Mission of Hawaii. Izumo Taisha Bishop Daiya Amano opened the program with a purification and blessing ceremony that the Rev. Jun Miyasaka of Izumo Taisha explained to those in attendance. Rev. Takamasa Yamamura of the Honolulu Myohoji Mission shared a Buddhist message. Yamamura, who is also a trained opera singer, sang “Ave Maria.” He also sang “Ka Makani Ka‘ili Aloha” to a hula performed by Mahealani Kalikolauolenaokalani.

The interfaith ceremony also included a Jewish message from Dr. Gregg Kinkley from the Congregation of Sof Ma’arev and a Christian message from Dr. Kahu Kaleo Patterson of the Pacific Justice and Reconciliation Center.

Kekoa Shirota-Ho, an alumnus of the YMCA of Honolulu, shared thoughts of friendship in a talk, titled “Let’s Get Together.”

The audience was invited to take their turn ringing the Hiroshima peace bell. It is a replica of the bell in Hiroshima Peace Park and was presented to the people of Hawai‘i in 1985 by the Hiroshima Prefectural Government in recognition of the long-standing and strong ties between Hawai‘i and Hiroshima. The bell was dedicated and placed next to Izumo Taishakyo Mission in 1990.

A second interfaith commemoration was held Aug. 9 at the Honolulu Myohoji Mission in Nu‘uanu to remember the atomic bombing of Nagasaki. The program was organized by the United Nations Association of Hawai‘i. Katsumi Takemoto played the shakuhachi as attendees made their way to the temple’s back lawn.

The program began with the Royal Hawaiian Band, led by bandmaster Clarke Bright, playing the anthems of Hawai‘i, Japan and United States, respectively — “Hawai‘i Pono‘i,” “Kimigayo” and “The Star-Spangled Banner.”

Messages from Motonobu Shiiba, president of Nagasaki Kenjin Kai, and Edwin Hawkins, representing Mayor Kirk Caldwell, focused on the importance of educating young people about the history of the atomic bombings of Hiroshima and Nagasaki.

Consul General of Japan Koichi Ito said he was grateful for the ceremony, which serves as a testament of how far relations between Japan and the U.S. have progressed and deepened since World War II.

A hula performance by kumu hula Mahealani Kalikolauolenaokalani was followed by prayers from three different faiths — Mollie Sperry of the Hawai‘i Bahá‘í Community, Rev. Kazunori Takahashi of the Honpa Hongwanji Mission of Hawaii and Rev. Makuakane of Kawaiaha‘o Church.

The Royal Hawaiian Band added to the ceremony with their rendition of “Ode to Joy.” United Nations Association of Hawai‘i president Joanna Tachibana shared thoughts on 2018 marking the 73rd birthday of the United Nations. She also explained their Sunflower Project.

“Sunflowers became a symbol of peace and nuclear disarmament when the defense ministries of the U.S., Russia and Ukraine met on a former Ukrainian missile base on June 4, 1996. They celebrated by scattering sunflower seeds and planting sunflowers, which can remove toxins, including nuclear waste, from soil and water.

“The Sunflower Project vision is to see all people in every corner of the globe who are concerned about nuclear war, pollution, violence, injustice and threat to the balance of nature, to plant at least one sunflower seed in a sunny place where it will be noticed.”

A moment of silence was observed at 11:02 a.m. to mark the exact moment the atomic bomb fell on Nagasaki. Attendees took turns ringing the Nagasaki Peace Bell, which was gifted to the people of the City and County of Honolulu by Nagasaki Prefecture’s hibakusha (atomic bomb survivors) and their supporters. Recognizing that peace begins with the acknowledgment of harmful actions in the past, the survivors in Nagasaki presented the peace bell as a gesture of reconciliation to the people of Honolulu, who suffered in Japan’s attack on Dec. 7, 1941.

The ceremony closed with Rev. Yamamura singing a moving rendition of “Ave Maria.”