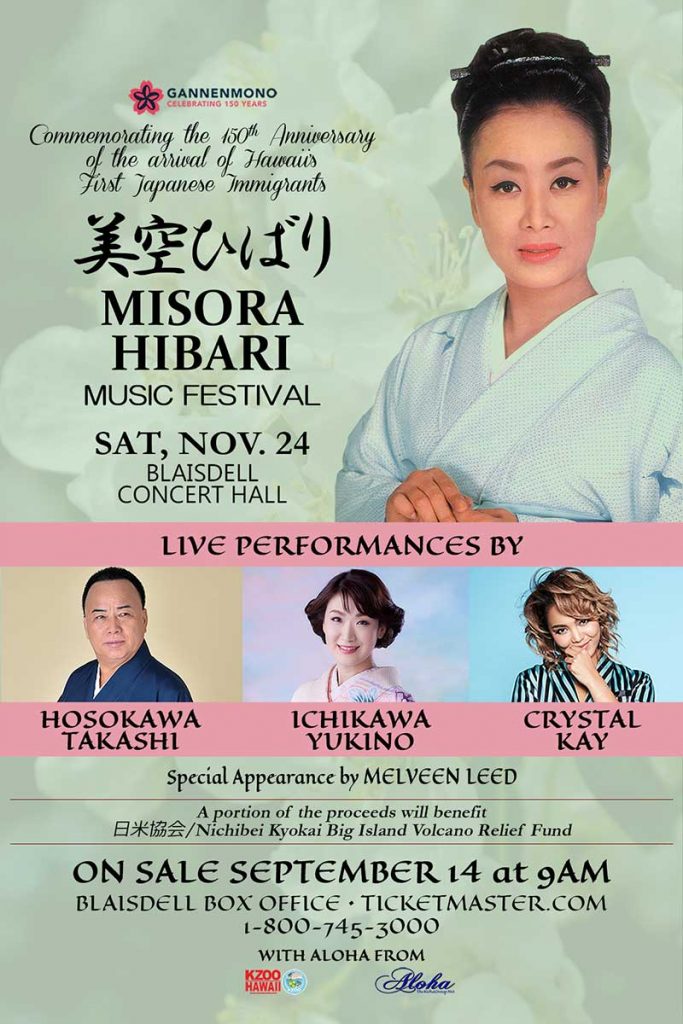 Legendary Japanese singer Misora Hibari loved the people of Hawai‘i, and Hawai‘i’s people loved her. On Saturday, Nov. 24, memories of the beloved Hibari’s gift for tugging at the heartstrings of her audiences with her nostalgic ballads will be celebrated at the Misora Hibari Music Festival at the Neal Blaisdell Concert Hall. The 1 p.m. concert has been designated a Gannenmono event. It is one of many events being held this year to commemorate the 150th anniversary of the arrival of Hawai‘i’s first Japanese immigrants.

Plans for the festival were unveiled at an Aug. 31 briefing at the Mariposa Restaurant in Neiman Marcus. The event was attended by Hibari’s daughter-in-law, Yuka Kato, who represented Hibari’s family.

In the months after World War II, a cloud of defeat and despair hung over the people of Japan. Japanese songs helped them heal and restored their spirits. They listened to songs on the radio and sang along. And, when they could afford to, Japanese singers began visiting Hawai‘i, which led to a deeper love for Japanese songs in Hawai‘i.

In May of 1950, Misora Hibari, then a child star, visited Hawai‘i. A year earlier, the 12-year-old actor had starred in the movie, “Kanashiki Kuchibuye — Sorrowful Whistles,” and had sung its theme song, which became a big hit. A local promotion company, Nichibei Kinema (Japan-U.S. Cinema), asked Hibari to hold a charity concert in Hawai‘i to help raise funds to build a memorial hall and clubhouse for the 100th Infantry Battalion veterans. Upon arriving in Hawai‘i in 1950, Hibari, which is her first name, visited the graves of 100th Battalion veterans at the National Memorial Cemetery of the Pacific at Punchbowl. She held concerts on O‘ahu, Maui, Hawai‘i Island and Kaua‘i.

She touched the hearts of the Issei especially with her bright smile and captivating voice. In her renditions, they saw hope. Seeing and hearing her reminded them of their past lives in Japan. But she also impressed the Nisei generation and even some baby boomer Sansei. Hibari remained in Hawai‘i for just over a month.

Hibari never forgot her first visit to Hawai‘i and neither did the people of Hawai‘i. She received an enthusiastic welcome whenever she returned to Hawai‘i to perform or to vacation, which she did numerous times.

Misora Hibari was born Kazue Kato in Yokohama in 1937. Her father was a fishmonger and her mother was a housewife. Hibari made her professional debut in 1948 at the age of 11.

In 1962, Hibari married Japanese actor and singer Akira Kobayashi. Their marriage lasted only two years. She later adopted her son, Kazuya Kato, as a child. Yuka Kato is Kazuya’s wife.

Hibari performed her final concert in the Tokyo Dome in April of 1988 and died less than a year later of pneumonia at the age of 52.

Her passing was widely reported in the American press. The New York Times’ obituary included an observation by Masao Yamaguchi, a professor at Tokyo Foreign Language University. He credited Hibari with helping Japan recover from World War II and to contributing to the country’s postwar recovery and economic growth.

The Times said the multitalented Hibari, who was both a singer and actress of screen and stage, released 1,200 songs and sold 68 million records, including 45 million singles in her lifetime. That number grew after her passing.

The Nov. 24 Misora Hibari Music Festival will celebrate the bonds between Hibari and Hawai‘i’s Nikkei. The roughly two-hour concert will feature two segments. The first half of the show will include popular songs from favorite movies during Japan’s Shöwa era — songs that were sung by singers such as Chiyoko Shimakura, Hideo Murata, Saburo Kitajima, Harumi Miyako and others. The songs were featured in such films as “Tokyo-dayo Okaasan (Mom, We are Here in Tokyo),” “Jinsei Gekijo (Life is Like a Theater),” “Namida Bune (Sorrowful Boat)” and others.

Tickets range from $45 to $75 — VIP tickets are $200 and includes an after-concert cocktail party. Tickets can be purchased at the Blaisdell box office or at www.ticketmaster.com.

Some of the performers in the Misora Hibari Music Festival will also travel to the neighbor islands, with a Maui show set for Monday, Nov. 26 at the Maui Arts & Cultural Center in Wailuku; and another at the Palace Theater in Hilo on Wednesday, Nov. 28.