In the 1930s, as the world roiled in the depths of the Great Depression, Hollywood rolled out a banquet of classic romantic comedies that is still revered and beloved today. Armed with whiplash dialogue, glamorous Manhattan penthouse settings and whisper-thin plots where no one actually worked but drifted from party to party, they starred the glimmering film idols of the great studios — Barbara Stanwyck, Clark Gable, Cary Grant, Katherine Hepburn, Myrna Loy and Claudette Colbert. Ascending into the ether above the grim reality of the economic ruins below, movies like “Bringing Up Baby,” “My Man Godfrey” and “It Happened One Night” provided a much-needed escape for millions of Americans.

On many different levels, Jon M. Chu’s retelling of Kevin Kwan’s bestselling novel, “Crazy Rich Asians,” is a loving homage to this much-cherished tradition of moviemaking. Made for a modest $30 million, the film’s plot revolves around a young Manhattan couple, Nick Young and Rachel Chu, who decide to visit Singapore, where Nick can introduce Rachel, his fiancee, to his loving family. It sounds simple enough, except for the fact that his clan is unimaginably wealthy and inordinately fond of Nick. Problems ensue. 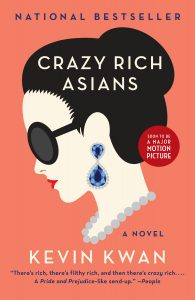 In so many obvious and subtle ways, however, Chu’s film is so much more than just another Hollywood summer evanescence that dissipates in the morning light. Not since Wayne Wang’s “The Joy Luck Club” 25 years ago have we seen such a sumptuous universe of Asian faces inhabiting the principal roles, the supporting cast and even the background palette of a major studio film. Here is a moveable feast of color and diversity that Hollywood usually relegates to the shadows and margins of its productions. Written, directed and produced by Asians and Asian Americans, Chu’s movie introduces mainstream moviegoers to a world that many have never seen and few would recognize.

For the first time, American audiences are treated to an array of different Asian male characters that is not limited to the clownish, asexual eunuchs that have regularly appeared on the silver screen. What a revelation it is to see Asian men in roles that depict them as sexually attractive, desirable and even human. Henry Golding, who plays Nick, shines from the moment he enters the film, despite the fact that he is a first-time actor. Plucked from the purgatory of Malaysian Discovery Channel and BBC travel shows, Golding’s grace and ease are impossible to ignore in every scene.

Ultimately, the movie belongs to a constellation of strong women, however, that include Constance Wu, who plays Rachel; Tan Kheng Hua, who plays Rachel’s mother; and Awkwafina, the YouTube rapper who nearly steals the film as Rachel’s best friend. Pressured to cast a white actress in place of Wu, the filmmakers stood firm and even postponed production for four months until the star of television’s “Fresh Off the Boat” was available.

At the center of Chu’s movie is the legendary Malaysian Chinese actress Michelle Yeoh, whose spidery incursions provide the edgy darkness that this sweet and sunlit film needs in order to hit its full emotional stride. Yeoh delivers a quietly textured and nuanced performance in a supporting role as Nick’s mother that reminds us all of her power and depth as an artist. It is Yeoh’s lupine confrontation with Wu on the grand staircase of the venerable family home that breaks the film wide open and transforms the emotional texture of the movie into something richer and more satisfying that people will want to return to repeatedly.

While “Crazy Rich Asians” grossed an impressive $35 million during its opening week, what will ultimately be its true measure of success will be whether the movie has legs: the capacity to generate word of mouth enthusiasm and return business at the box office. It is this viral boomerang effect that industry insiders are watching for that could signal a profound change in when and if movies with more Asian actors in substantial roles are made in Hollywood. Chu, who previously directed such box office successes as “Step Up 2: The Streets” and “Now You See Me 2,” saw “Crazy Rich Asians” as his opportunity to give back to the larger Asian community and change the cultural landscape of American
filmmaking.

Promised millions by Netflix to make his film, he accepted a lower offer by Warner Brothers, counting on the greater prestige, marketing and distribution clout of the long-established Hollywood studio to break down the glass doors that have kept Asians out in the cold for so long. In some ways, the fact that Warner Brothers even made an offer is remarkable: Romantic comedies have fallen out of favor in Hollywood and casting Asians in lead roles is a nonstarter for most major studios. But the competition that the old dowagers are facing today from aggressive, nascent arrivals such as HBO, Amazon, Netflix and internet options such as YouTube are transforming the rules of a very old game and reconfiguring the very ground that the movie industry occupies in the bigger media world. There is also the demographic reality that Asians make up the fastest growing minority in America today and Warner Brothers cannot be late to that potentially lucrative and growing audience.

In the end, much depends on the long-term success of “Crazy Rich Asians.” If the movie scores big, there is already a flock of other similar projects lined up on the runway ready to take flight. When interviewed on NPR last month, Chu was asked what would happen to Asian filmmakers and actors if his movie falters. Without pausing he replied that someone would make another movie, and another after that. The change, he concluded, is already happening and the revolution has just begun.