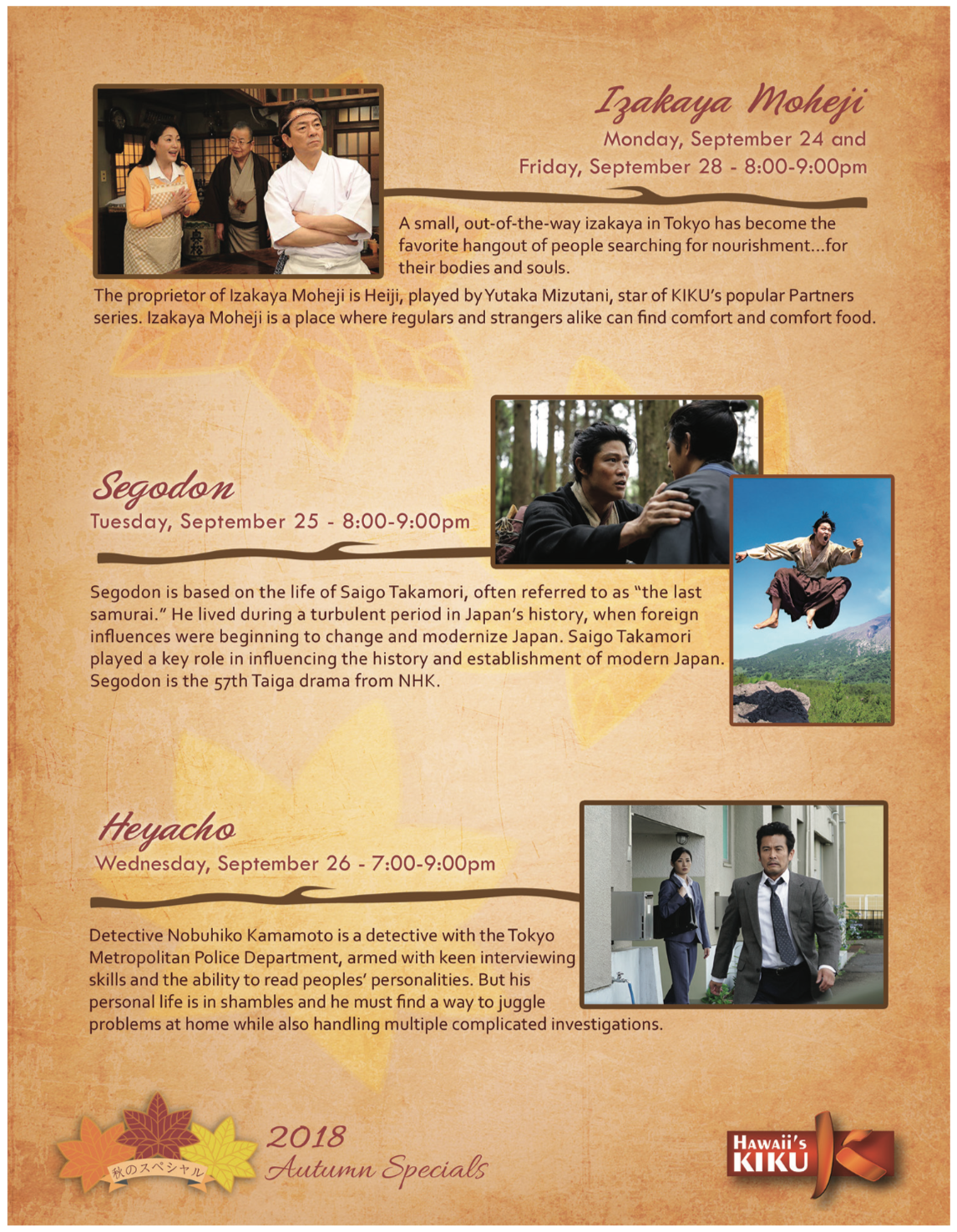 Channel 9 (Spectrum) and 20 (Hawaiian Telcom) Programs are subject to change, without notice. For updated information, call 847-2021)

Moms lead busy lives caring for their homes and families, often putting their own needs last. In this special the attention is focused on mom and support is provided to help her lose weight, get fit and feel beautiful again. Can she do it?

After years of trying, Kyoko and her husband Takehiro are finally pregnant. But their joy at the prospect of becoming parents ends suddenly when they learn Kyoko has stage four cancer. They now must face agonizing decisions that force them to choose between the life of Kyoko or the health of their baby. Adapted from a true story.

Actor/comedian Hidehiko Ishizuka (the “Fat Detective”) and former sumo wrestler Furiwake Oyakata travel around Japan doing what they do best: EATING!!! The friendly but fun competition they have to see who gets to eat each area’s specialty makes this show even more fun to watch.

Travel to the northern region of Japan as the program’s host experiences the interesting places and delicious foods found in that area of the country.

“Maalaala Mo Kaya” meaning “Would you remember?” in English and abbreviated as “MMK.” This 60-minute program is the longest running drama anthology in Philippine television and in the world hosted by Charo Santos-Concio. Reaching its 25th year in 2016, this series features real-life stories of common people or even famous celebrities and personalities through letter-sending.

Anthony Real, the husband of Millet meets Shiela who he will eventually marry. Caught in a bigamous relationship, Anthony’s wives will eventually find out the truth that they aren’t Anthony’s only wife, which will lead to repercussions into their lives.

Shinjiro Katsurahi is a samurai informally know as Momotaro. Unlike the traditional samurai, Momotaro has no aspirations for power. His only goal is to live a carefree life, but his strong sense of fairness often pulls him into battles with powerful people who take advantage of those who are weak and trying to live an honest life. He defends the common people and fights against injustice.

Nick and Vanessa are engaged to be married, but tragedy strikes when Nick is in a helicopter crash that causes him to lose his memory.

The authorities, unable to find Nick, declare him dead, leaving Vanessa in a deep depression. Nick resurfaces, but with no recollection of Vanessa or his past life, introduces himself as Darwin. As Darwin, he meets and falls in love with a beautiful artist named Jessa.

They marry and have a son. But faith intervenes again as Darwin gets involved in another accident, which causes him to regain the memory of his life as Nick and forget his new life as Darwin.

Who has the right to a future with Nick now? His first love Vanessa? Or the family he created with Jessa and their son?

“The Poor Heiress” tells the story of two rival families in a Filipino- Chinese community: the Wongs and Sy clans.

The families clash over differences in culture and traditions. But hidden beneath those differences may be relationships that tie the families togeth- er in ways they don’t realize.

This series, which replaces “Soko ga Shiritai,” takes viewers on a jour- ney throughout Japan, highlighting foods and places that define the coun- try that is Japan.

The thirteenth season of this popular detective series.

Detective, Ukyo Sugishita, has great insight and cunning skills. His partner, Toru Kai, is strong-minded and rough. And he is excellent in the powers of observation. Together they solve many mysterious crimes.

This series chronicles the story of Ogami Ittö, the Shogun’s executioner who uses a Dötanuki battle sword. Disgraced by false accusations from the Yagyü clan, he is forced to take the path of an assassin along with his 3-year-old son, Daigoro. Together they seek revenge on the Yagyü clan and are known as “Lone Wolf and Cub.”

Lucas Matthew is told by a fortune teller that he will meet his true love at the age of 21. Meanwhile, a young girl named Grace is told the same thing by another fortune teller. Neither Lucas Matthew nor Grace takes the predictions seriously until years later when they are both 21.

One day, Grace’s sister Joy dares her to be spontaneous and kiss a stranger. The man Grace kisses turns out to be Lucas Matthew, and they eventually begin a romance.

Tragically, Joy is diagnosed with leukemia, and while undergoing treat- ment at the hospital, begins to fall in love with a young intern. The intern turns out to be the same stranger her sister Grace has fallen for — Lucas Matthew.

What will happen when the sisters discover they are in love with the same man?

The family drama “behind the curtain” continues from season two. It has been four years since Naoko started training to become the head pro- prietress of her husband’s family inn. She has persevered in earning the respect and acceptance of the current head proprietress, who happens to be her mother-in-law, Shino. The announcement of Naoko being named the new head proprietress finally nears, until Shino unexpectedly presents Naoko with an assignment.