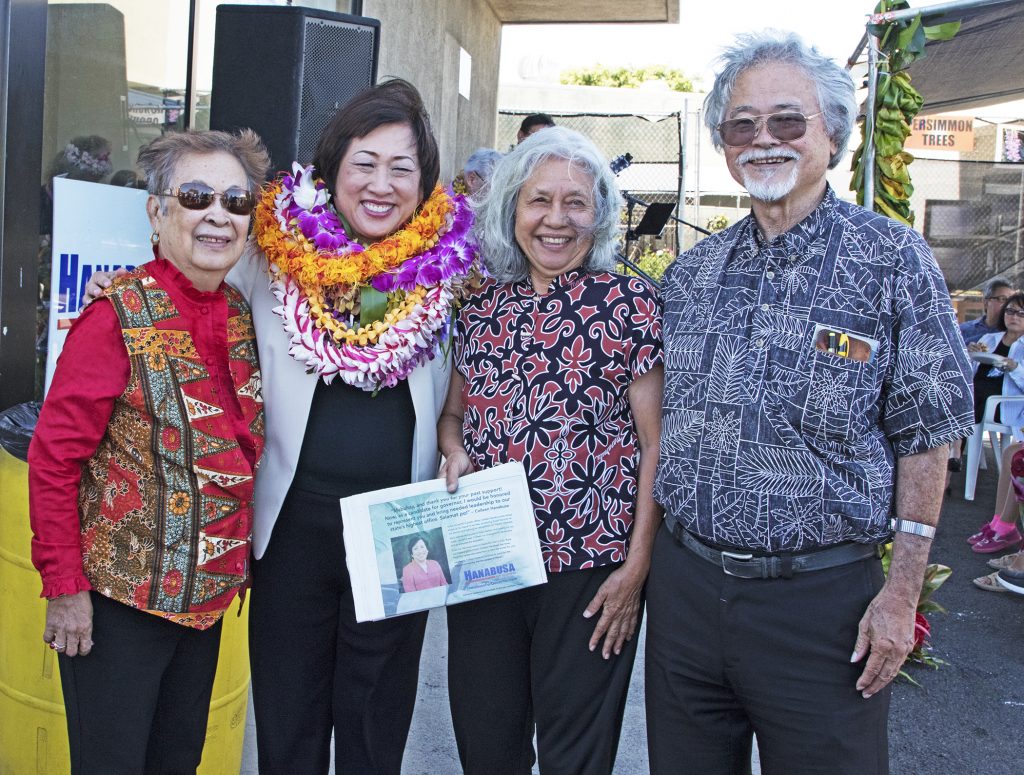 On Aug. 11, Hawai‘i voters will decide who will advance to the general election in both the Democratic and Republican primaries for governor. On the Republican side, polls show state Rep. Andria Tupola leading former state senator John Carroll and former Marine and Hawai‘i Department of Education administrator Ray L’Heureux.

But the race being watched most closely is the hotly contested Democratic primary race for governor between the incumbent, David Ige, and U.S. Congresswoman Colleen Hanabusa, who decided earlier this year to leave the Congress to challenge Ige. Hanabusa’s entry into the race suddenly spiced up the contest.

The following stories focus on the views of Colleen Hanabusa and David Ige.

COLLEEN HANABUSA: UP FOR “A GOOD FIGHT”

Ask Colleen Hanabusa what she likes and she might say making ikebana flower arrangements, or eating at old-school local diners, or even attending the summer bon dances. But review her 20-year political career and what becomes abundantly clear is that what Colleen Hana-
busa really enjoys is a good fight.

In an early Honolulu Star-Bulletin profile on her, one legislative colleague borrowed the local slang for a tough woman, calling Hanabusa “a tita with brains.”

“I’ll take it as a compliment,” Hanabusa responded. “As long as they take me seriously and they take what I’m doing seriously.

“And, as long as they realize that it is not going to be an easy battle if we are going to fight,” she added.

As a youngster, Hanabusa recalls growing up in Waianae and battling it out with the neighborhood boys.

“We would play samurai and run around with little sticks,” she recalled in a 1999 profile.

Her election battles have had the same combat intensity.

She then immediately tangled with former Hawai‘i attorney general Margery Bronster. Hanabusa questioned the large number of over-votes in her district’s election, to which Bronster responded that the area’s “education level” might have been a problem.

Thinking that Bronster was looking down at her Wai‘anae constituents, Hanabusa demanded and got an investigation of the state’s voting software and discovered faulty ballot-counting machines misreading the ballots.

Despite their past history and his support for David Ige four years ago, Cayetano has thrown his support behind Hanabusa in this year’s election, calling her “smart, articulate and honest” in a press release issued by the Hanabusa campaign.

“Four years ago, I supported David Ige for governor. Sadly, he has not provided the kind of leadership needed to guide Hawai‘i in the years ahead. His indecisiveness and penchant for being all things to all people has put the TMT (Thirty Meter Telescope) at risk, creating the real probability that Hawai‘i may lose the world-class telescope to competitors,” Cayetano said.

He said Ige’s “indecisiveness and incompetence” in the handling of the false missile alert “scared a million people and made Hawai‘i the laughing stock of the nation.”

But, Cayetano said he is most troubled by what he called Ige’s “lack of knowledge” about the city’s rail project.

“Ignoring huge cost overruns, Governor Ige throws caution to the wind and doubles down on the project, saying he would support an extension of the rail tax.

“Colleen Hanabusa, on the other hand, demonstrated the flexibility and wisdom we expect a governor to have in adjusting to changing conditions. She believes that extending the rail tax would give the City a ‘blank check’ in building the system, raising the specter that the rail tax will be used not only for construction but to pay for operations and maintenance costs as well,” Cayetano said.

Hanabusa also garnered the support of former Gov. George Ariyoshi, who endorsed Ige four years ago. In 1985, Ariyoshi, then governor, appointed Ige to the Pearl City House seat that had been vacated by Arnold Morgado, launching Ige’s political career.

“Colleen has the enthusiasm, experience and vision to lead our state into the next decade,” stated Ariyoshi in a press release issued by Hanabusa’s campaign.

“Even at my advanced age, I consider myself a futurist and have great concern for the future of Hawai‘i,” Ariyoshi said.

He said he endorsed Ige in 2014 “because I believed he would make Kaka‘ako a major place for locals to live, take advantage of opportunities before us to be a world leader in aerospace, and strengthen the East-West Center to its potential as an anchor of U.S. and Pacific nations.”

But, he said, “I have been disappointed by David. Over the last three and a half years, these prospects and others have begun to slip away.”

Hanabusa said she was humbled to be endorsed by the two former governors. Of Ariyoshi’s endorsement, she said, “As the longest-serving state governor in Hawai‘i, Governor Ariyoshi holds a place in our state’s history that can never be matched. He understands that the Democratic Party of Hawai‘i requires a titular head who is enthusiastic about leading our party and the state.”

Not ducking political battles is part of Hanabusa’s campaign style, although the results have not always been successful. When Hanabusa ran for the U.S. Senate in 2014, it was another Democratic primary fight that pitted her against U.S. Sen. Brian Schatz, who had been appointed to the post by then-Gov. Neil Abercrombie following the death of Sen. Daniel K. Inouye. It was a close race, but Hanabusa lost.

Today, the 67-year-old Hanabusa is again in a tough primary fight, this time against incumbent Gov. David Ige, 61.

Early polling showed the 1st Congressional District representative far ahead, but as the Aug. 11 election approaches, the race has tightened, with Ige pulling ahead in both Honolulu Star-Advertiser and Honolulu Civil Beat polls.

For Hanabusa, the campaign for governor centers not on a specific issue or on support or rejection of a government program, but rather on Ige’s core competency.

The problem, Hanabusa says, is that Ige cannot lead the government or make decisions in a timely manner.

“Leadership is based on being able to work with all three branches of government, and that is what is lost,” Hanabusa said in an interview.

“For Hawai‘i to move forward, you have to have someone who is respected in the governor’s office. Leadership is not something self-proclaimed; it is something earned.”

As she has done during several public debates, Hanabusa says Ige’s inability to put out a public message in January regarding the false missile alert shows that he just isn’t up to the job.

“What you don’t want to see in terms of leadership is like the 38 minutes it took to alert the public to the false alert,” Hanabusa said.

The public has been watching Ige for almost four years, she says, and the perception of government has changed.

Speaker of the House Rep. Scott Saiki describes Hanabusa as a someone who will jumpstart state government.

“She isn’t afraid to make decisions knowing they may offend certain people; she will do what she has to do,” Saiki said in an interview.

“The strengths for Colleen are that she will be decisive and also a problem-solver. She can get into the weeds, sometimes too much, but it is because she is trying to see how to solve something.”

Hawai‘i, Hanabusa says, has a new and important role to play, and as governor, Hanabusa thinks she could help.

“What I would like to see us in four years be is very much on the way to being an internationally recognized source of planning and programs on how we are addressing agriculture, health and education. We should be the center for the whole region.”

“There are so many things that Hawai‘i does that people don’t realize,” Hanabusa said.

The Rev. Bob Nakata, a longtime political ally of Hanabusa and a former state senator, predicts that if elected, Hanabusa will be an action-oriented governor and will bring people like her to state government.

“I think she would be much more proactive than Ige. She won’t just talk about things; she will direct her staff to get moving. The governor has a number of studies going, but we need action now,” Nakata said in an interview.

Nakata has been a strong force lobbying for more affordable housing for Hawai‘i’s middle class, and Hanabusa says she wants to include that in her plans.

“Pro-development takes on a negative connotation for people who are just developing more land,” Hanabusa said.

“But I am pro-development in terms of I want us to go vertical and go with truly affordable housing for new groups like millennials and also kupuna (senior) housing.”

Nakata predicted that Hanabusa will be a strong force for more housing.

“I think she is collaborative. She will talk to people, but it won’t stop at the talk; she will push. I think her people will be assertive and she will be a lot more hands-on with the Legislature.

“She is smart, tough, assertive. If you are on her staff and you are not pushing things forward, she will be on your back. That’s her personality,” said Nakata.