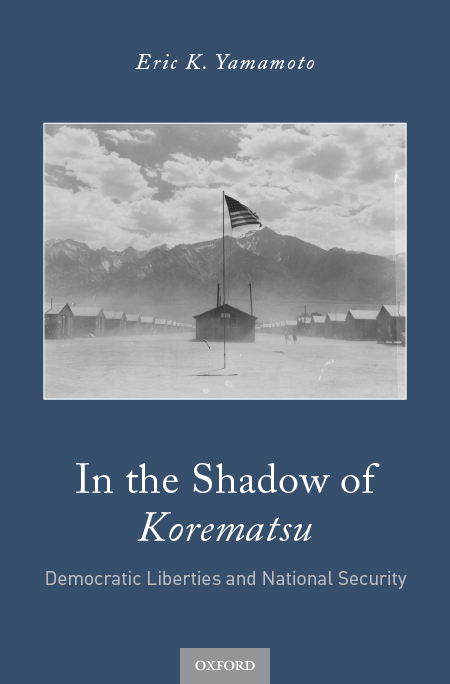 To many of us, we are living in an America that today appears increasingly unrecognizable. As our nation makes a hard turn to the right, we are voyaging through the shadow side of the American dream. Instead of listening to our higher angels of compassion, justice and tolerance, we have as a nation retreated into the darkness of isolationism, exclusion and persecution. The landmarks of this new geography may look the same as yesterday, but the terrain is decidedly different.

Into this morass has come a remarkable book from Oxford University Press, a leading academic publisher, that attempts to offer a way out of our current dystopia. Penned by legal scholar and University of Hawai‘i William S. Richardson School of Law professor Eric K. Yamamoto, “In the Shadow of Korematsu: Democratic Liberties and National Security” is a clear-eyed yet eloquent appeal to common sense and reason in a time of chaos.

The subject is more than academic to Eric Yamamoto, the Richardson School of Law’s Fred T. Korematsu Professor of Law and Social Justice. In the 1980s, as a young practicing attorney in Honolulu, he left his law firm to join his mentors and classmates from the University of California Berkeley law school in San Francisco, who were pulling together the coram nobis case of Fred Korematsu, a San Leandro draftsman. The experience changed Yamamoto’s life forever. He never returned to law practice, deciding instead to teach aspiring young lawyers about America’s Constitution and the wartime injustice that had been dealt to Fred Korematsu and Japanese Americans on the West Coast and in Hawai‘i.

In teaching and writing about the law and social justice, Yamamoto found his calling. He was recognized nationally as the 2006 Outstanding Law Professor by the Society of American Law Teachers and has been awarded the University of Hawai‘i’s Regents Medal for Teaching Excellence. Besides “In the Shadow of Korematsu,” Yamamoto also authored the award-winning “Interracial Justice: Conflict and Reconciliation in Post-Civil Rights America” in 2000, and “Race, Rights and Reparation: Law and the Japanese American Internment” in 2013.

While Yamamoto says his latest work is a specific examination of the role of the courts and the importance of judicial independence, his book goes far beyond that narrow boundary as he tries to help us make sense of a world that has turned upside down.

In 1942, President Franklin Roosevelt ushered in one of the darkest chapters in our country’s history by issuing Executive Order 9066. Cunningly faceless in its technical language, FDR’s directive impacted the lives of thousands of innocent people for decades to come. The order authorized the forced evacuation of 120,000 persons of Japanese ancestry from the West Coast and their imprisonment in 10 desolate camps scattered across the nation’s interior. Two-thirds of the evacuees were American citizens and the majority were women, children and the elderly. Stripped of their constitutional rights, some had as little as 48 hours to liquidate their homes, businesses and household possessions.

Roosevelt’s command was carried out despite exhaustive investigations by the Federal Bureau of Investigation, Office of Naval Intelligence, Federal Communication Commission, and even FDR’s own private inquiry which concluded that the Issei and Nisei posed little threat to American military security.

Consequently, internment resisters Gordon Hirabayashi, Minoru Yasui and Fred Korematsu sued the government on the grounds that their constitutional rights had been violated. Their lawsuits reached the United States Supreme Court in 1944, with the majority ruling against them. Abandoning their responsibility as the guardians of our nation’s most important civil liberties, the justices abdicated their constitutional independence and deferred their authority to the executive and legislative branches of the government. Driven by the prejudice, paranoia and panic of the moment, their decision would haunt American case law for the next 74 years.

Yamamoto uses the 1944 Korematsu v. United States Supreme Court decision as a fulcrum to explain not only the tragedies of the past, but the challenges of the present and the opportunities for the future. Structurally, “In the Shadow of Korematsu” reads like a well-crafted four-act play with a straightforward introduction, an elaboration of the central theme, a rising climax and a closing denouement that weaves together all the bright strands of his narrative.

In the first act, Yamamoto frames the dilemma that sits before us as a nation: Referencing both the Korematsu Supreme Court decision and the 1984 U.S. District Court’s Korematsu coram nobis reopening which starkly revealed the higher court’s malfeasance, Yamamoto points out that in the “Age of Terrorism,” how our nation safeguards our security while protecting our civil liberties will define the constitutional fabric of America going forward. As noted earlier, Yamamoto served on the legal team that argued successfully for the Korematsu coram nobis reopening in 1984. The writ of error coram nobis is a legal procedure that allows the court to reconsider its earlier decision based on the discovery of an error in the original trial.

In the second act, Yamamoto describes how differently the Korematsu decision has been interpreted over the past decades depending on which side of the political fence one sits. While some observers see Korematsu as a cautionary tale of shameful government overreach and judicial irresponsibility, others see the landmark Supreme Court decision as a valuable precedent that underscores the need for unconditional obedience to the elective branches during times of war.

In the third act, Yamamoto offers a pragmatic stress test that the courts can use to cut through the political and legal underbrush to assess the true intent of any statute: If the regulation threatens any core constitutional right in the long run under the guise of protecting public security in the short run, the court must apply the highest scrutiny to the underpinnings of that law and the motives of its authors. Yamamoto is no starry-eyed radical — he understands the difficult calculus of balancing homeland security with the protection of our civil rights. But he warns that sacrificing our most cherished freedoms in the face of groundless fears and hysteria is unacceptable.

In the fourth act, Yamamoto brings his narrative to a close by reviewing more recent court decisions such as Rasul v. Bush and Hawaii v. Trump, where the salient issues the Korematsu case first unearthed are still being fought over and debated today. In the process, he asks the harder questions about America’s future that many of us thought had already been answered by past generations in the previous century.

Yamamoto’s prose is free of any hyperbole, sentimentalism or superfluous emotion. He is, after all, a longtime law professor committed to objectivity, precision and cogency as a critical thinker. His sentences are filled with hard research and factual weight that gives his writing a substantiveness that is not for the casual Sunday reader looking for an easy distraction to pass the time of day. If “In the Shadow of Korematsu” is a challenge for the layperson unfamiliar with legal terms, it is a journey that once undertaken is well worth the effort. For all of its seriousness and sobriety, there is an unmistakable urgency, outrage and power in Yamamoto’s work that cannot be ignored or easily forgotten.

Some critics have scolded liberals, independents and moderates for exaggerating the darkness of the era in which we live today. They declare confidently that the institutions of our country are somehow invulnerable to the winds that are buffeting our nation and that we the people need do little but sit tight and ride out the storm.

Yamamoto disagrees. He reminds us that while it may feel comfortable for many of us to ignore what is going on in our streets and in our courts because we are not Muslim or gay or newly arrived, the reality is that the ongoing flurry of executive orders and ugly civil confrontations are already shaping the character of our nation. It is only a matter of time before the tumult reaches every one of our doorsteps. The question that Yamamoto asks in different ways throughout his book is simple, yet profound: What kind of country do we want to live in going forward? Is it a community that will be based on fairness, transparency and equality — or will it be a nation that continues to retreat into suspicion, cynicism and hate?

Ultimately, “In the Shadow of Korematsu” is an astute call to arms for all Americans to step forward and make their voices heard to take back the country they once inhabited.

As Yamamoto notes at the end of his book: “Protecting our most cherished rights will require the combined advocacy of an independent judiciary and an awakened public that refuses to be cowered by the immensity of the task that lies before them. How we respond to this work will define the country that we will live in today, tomorrow and perhaps forever.”