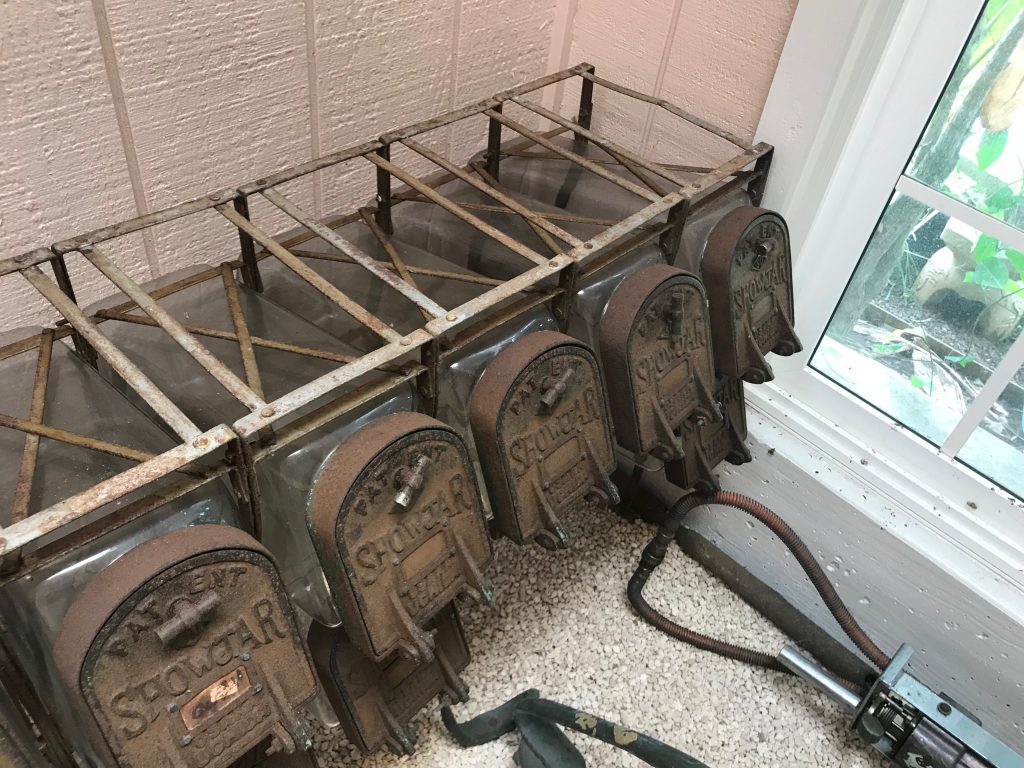 For Colin Yamamoto, They are All Historical Treasures

A seat belt from Aloha Airlines Flight 243, a car speaker from the old Kahului Drive-In, plantation kaukau tins, handmade potato peelers and vegetable graters from the 1930s and ’40s. These pieces from Maui’s past are just a fraction of the memorabilia that fills every nook and cranny of Colin Yamamoto’s home in Wailuku.

The retired Maui County Fire Department battalion chief has been collecting remnants of Maui’s plantation past and local history, as well as Japanese antiques, for about 40 years.

“This is my museum,” he said as his eyes scanned his living room. More than a half dozen 8-foot-tall glass cases filled with antiques line the walls next to photographs of his children. Yamamoto describes himself as an “amateur collector” with “choke stuff,” as he puts it. 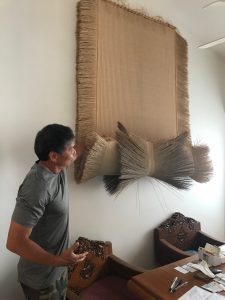 Yamamoto’s collection, which he estimates to be thousands of pieces, ranges from the mundane to the historic to the quirky.

Like many Hawai‘i collectors, he has hundreds of old glass soda, milk and beer bottles.

What others don’t have, however, is the old Ooka Supermarket bathroom key that was chained to a large green chorizo can — empty, of course. Ooka, the beloved mom-and-pop grocery store in Wailuku town, closed in the summer of 2005.

While not worth any money, the key brings back fond memories for Maui residents.

What made Yamamoto amass such a huge collection?

“Because I’m interested in preserving memorabilia, preserving the past, because I appreciate the days of the plantation era,” he said. “I appreciate how everybody had to work together to basically survive. To me, that is precious. I don’t want to lose that memory.”

Of his massive collection, two items rank as his favorites: a pop-tab can opener that Hansen’s disease patients at Kalaupapa on Moloka‘i used and a hand-woven tatami mat from Japan.

“I treasure this so much,” said Yamamoto.

The father of one of his classmates had an uncle who lived at Kalaupapa. The family would visit the uncle every summer. The father managed to get three can openers — he kept one for himself, gave one to his son and gave the third to Yamamoto.

“I was just blown away,” Yamamoto said.

Another item near and dear to Yamamoto’s heart is a hand-woven tatami mat from Japan. It was woven by Junpei Kitayama, who learned the art from Fumiko Teraoka. Sometime around 1995, Yamamoto saw an episode of the popular Japanese television series “Soko ga Shiritai” that featured Teraoka-san and her weaving. It noted that she was the last person in Japan to hand-weave tatami mats with a loom.

Yamamoto is a huge fan of the show — he taped some 250 episodes and used them as his guide on trips to Japan, searching for some of the treasures.

The show that featured Teraoka-san said she was in her 80s and lived in Hiroshima. She was shown working tirelessly, hand-weaving the mats for very little money, although she knew that people were selling her mats for much more.

In 2011, Yamamoto helped out a friend by hosting two boys from Japan as part of the Aloha Initiative Project. The boys were brought to Hawai‘i for some respite following the devastating Töhoku earthquake and tsunami and homestayed with Yamamoto’s family. It helped that Yamamoto could speak Japanese because he had been an exchange student in Japan from 1989 to 1990.

He showed the boys the “Soko ga Shiritai” episode featuring the tatami mat. One of the boys said his grandfather lived in a town next to Te-
raoka-san’s home. Before they returned to Japan, Yamamoto gave the boy $100 and asked him to purchase a small woven piece from Teraoka.

When the boy returned to Japan, he and his grandfather searched for Teraoka-san, only to learn that she had died a year earlier. The boy took photos of her home and sent them to Yamamoto, who recognized it from the television program.

Since Kitayama-san had learned the craft from Teraoka-san, the boy purchased a tatami mat that Kitayama had woven for Yamamoto. The mat, woven in the style of Teraoka-san, finally arrived at Yamamoto’s home. It now hangs in his dining room.

It has the same backside as the mat featured in the show — you can see how it is joined at the center on its backside, but the joint cannot be seen from the front.

According to a Fukuyama City pamphlet, this style of bingo tatami facing woven by Teraoka and Kitayama is a high-quality tatami facing. The hand-weaving technique is believed to date back to the 1600s. In 2015, the city proclaimed Kitayama to be the only successor to the technique. One day of hand weaving produces just one tatami mat, approximately 70 inches by 35 inches.

Yamamoto marvels at the quality of the “old time Japan” crafters, calling them unbelievable.

Most of the other items in Yamamoto’s collection come from yard sales, church rummage sales and from friends.

He said he doesn’t collect memorabilia to make a profit — he doesn’t even sell items in his collection: He gives them away to people to whom the item has meaning.

“It happens many times; I have something that belongs to someone’s family. They say, ‘Hey, that’s my grandfather’s [item].’ I give it to them,” Yamamoto said.

Previously, when he had more than one of a certain item, he gave them away when people came over to visit him to check out his collection.

One of those items was a two-inch tall tiki carved from black coral that he found at a garage sale in the early 2000s. He used to give them away, but doesn’t anymore now that he only has about a dozen left. He didn’t know the value of black coral and ended up getting 62 pieces for $25.

Later, when he checked with a black coral jewelry specialist, Yamamoto learned that the pieces were worth about $75 apiece. They are probably worth much more now, he said.

Everywhere you turn in Yamamoto’s home, you can see pieces of history come alive.

In a sunlit room designed like a Japanese stone garden, Yamamoto has more than six rectangular glass candy jars with metal covers from the old T.K. Supermarket in Happy Valley, where he spent his hanabata days. He remembers buying sweets from those jars.

His guest bathroom is a tribute to Ooka Supermarket and National Dollar Store, both Wailuku institutions that are now closed. An Ooka check stand light stands next to the toilet and the wooden check stand number sign is attached to the wall, below a National Dollar banner. He even has a metal sanitary napkin dispenser from National Dollar on his bathroom wall. After bringing it home, he found dimes from the 1930s inside the dispenser. Those dimes are now kept in a plastic Easter egg.

As for that Aloha Airlines seat belt mentioned earlier in this story, it is from that fateful flight. Yamamoto, a former paramedic, got it from a paramedic friend.

On April 28, 1988, his friend responded to the Aloha Airlines emergency landing at Kahului Airport. A large section of the Hilo to Honolulu-bound aircraft’s roof had torn off mid-flight. A flight attendant was sucked out of the plane and died.

Paramedics needed to secure the passengers being transported to the hospital and did not have enough strapping material, so his paramedic friend grabbed a seat belt from the plane, which, miraculously, landed safely at Kahului Airport.

Years later, Yamamoto saw the red seat belt lying around. When he began asking questions about it, his friend gave it to him.

He also gathered up memorabilia from old mom-and-pop shops and Maui landmarks that have closed, including wooden hangers from Kahului Dry Cleaning and Laundry in the Kahului Shopping Center, a room key from the old Maui Surf Hotel, fly swatters from Nagata Store in Pä‘ia and a metal bottle opener from Haleakala Motors. He also has empty sugar bags from Maui Brand Natural Cane Sugar that came from Hawaiian Commercial & Sugar (HC&S) that shut down in 2016.

A stone usu (mortar) and cement soybean grinders that once made fresh tofu now sit outside a door. A tansu (traditional Japanese cabinet) is situated in a doorway, and glass cases holding dishes are stored in the bedrooms of the house.

“I running out of room,” Yamamoto acknowledged. But letting go of these treasures is hard to do, he says.

Melissa Tanji has been a reporter for The Maui News since 2000. The Maui native earned her bachelor’s degree in journalism from the University of Hawai‘i at Mänoa.