It was nearly 60 years ago that the late Hawai‘i writer, historian and scientist, O.A. “Ozzie” Bushnell was challenged by his wife, Elizabeth.

As Bushnell’s son Andrew recalled in an interview, a bad play and the ensuing dare launched Bushnell’s literary career.

“They went to a play about Captain Cook and, apparently, he did not like the play and as they walked out he said to my mom, ‘I could write something better than that.’ And my mom said, ‘Well, why don’t you?’ So he did,” Andrew Bushnell said in a phone interview from his home on Kaua‘i. 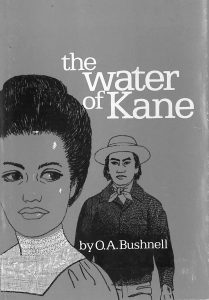 The boast resulted in Bushnell’s first novel, “The Return of Lono,” which won an Atlantic Monthly fiction award and started the University of Hawai‘i microbiologist on a second career as a novelist. He subsequently published “Kaaawa” about a changing Hawai‘i, and “Molokai,” about the Hansen’s disease settlement at Kalaupapa.

Bushnell, who died in 2002 at the age of 89, comes to mind now because two of his later books, “The Stone of Kannon” and “The Water of Kane,” published in 1979 and 1980, respectively, deal with the first Japanese immigrants to Hawai‘i — the Gannenmono.

Hawai‘i this summer is commemorating 150 years since the first Japanese immigrants, approximately 150 of them, arrived in Hawai‘i in 1868 to work on the Islands’ sugar plantations. The name Gannenmono, meaning “people of the first year,” were given that name because they left Japan during the first year of Japan’s Meiji era.

Attorney David Arakawa, who is involved in a number of Japanese and Okinawan community organizations, was involved in the coordination of last week’s celebration and attended many of the events. 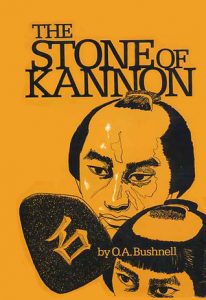 “The migrants included people from various social backgrounds, including artists, hairdressers, cooks and at least one samurai,” he said. “Most of them were not prepared for the rigors of plantation labor,” Arakawa said.

According to the research of University of Hawai‘i at Mänoa professor of Japanese history Dr. Mark McNally, who spoke at the Gannenmono Symposium, reports of mistreatment of the Gannenmono were investigated by the Japanese government. In late 1869, two officials were dispatched to Hawai‘i to interview the Gannenmono. Upon learning that not all of the immigrants felt they were being mistreated, they worked out an agreement with the Kingdom of Hawai‘i, which agreed to pay for the passage back to Japan of the 40 unhappy Gannenmono. According to McNally, three other Japanese castaways who had been living in Hawai‘i prior to the arrival of the Gannenmono joined the 40.

The remaining 110 completed their contracts in 1871 at which time about a dozen returned to Japan. Half of the remaining immigrants decided to seek their fortunes on the continental U.S., leaving about 50 of the original Gannenmono in Hawai‘i.

Bushnell’s two books on the experience were written as a fictional recreation. The author originally intended for the two books to be one long effort, but his publisher, UH Press, split the manuscript into two books.

“The Stone of Kannon” begins in ancient Edo (renamed Tökyö in 1869) in the closing days of the Tokugawa Shogunate and ends in the town of Wailuku, Maui, where 11 of the Gannenmono hoped to make a new life and find their fortunes.

In his preface, Bushnell wrote: “The places, circumstances, attitudes, beliefs, and customs described here were very real to Japanese, Hawaiians, and haoles in 1868. The sequence of events, from the time the First-year Men were recruited in Edo and Yokohama until they were dispersed among the sugarcane plantations of Hawaii, has not been invented. It follows accounts written by Hilary Conroy, Roy M. Shinsato, and Masaji Marumoto — whose works are available in our public libraries.”

Bushnell’s sequel, “The Water of Kane,” picks up the story eight years later as five of the Gannenmono help to construct the Hämäkua irrigation ditch along the northern flank of Haleakalä, bringing water to irrigate the sugar fields of central Maui under the direction of two men who would leave their mark on the Valley Isle and Hawai‘i, in general — Samuel T. Alexander and Henry Perrine Baldwin, founders of the Big Five company, Alexander & Baldwin.

“The Stone of Kannon” and “The Water of Kane” were published as hardcover books within a year of each other, in 1979 and 1980, respectively. “Stone” retailed for $10.95, and “Water” sold for $12.95. Both UH Press editions have been out of print since the late 1990s, said UH Press promotion manager Carol Abe. However, a mass-market paperback of “Water” was published by Mutual Publishing in 1999.

“Amazing as it sounds today, in the first three months, the book (“The Stone of Kannon”) sold over 4,600 copies. It had reviews nationwide,” said Abe, who combed through the books’ sales records for this story. Bushnell’s earlier novels, “Molokai” and “Kaaawa,” were also published as paperbacks and, combined, have sold more copies than “Stone” and “Water.” Despite that, Abe said sales of Bushnell’s two Gannenmono novels did very well.

“I’d say that 4,600 in three months is excellent — the projected sales was only 2,000 in the first year. A second printing was rushed and I suspect the book ran out of stock until that became available,” she added.

According to Abe, the Bushnell family gave UH Press the rights to republish “The Stone of Kannon” as a paperback edition. “UH Press has plans to republish ‘Stone’ in the future, but no definite date has been scheduled yet,” she said.

In a 1979 interview in the Honolulu Advertiser, Bushnell explained that once he had set out his characters, the story of their assimilation into Hawai‘i life came naturally.

The book, Bushnell said then, was his easiest to write.

“It was a matter of sitting down and letting the characters live their lives,” Bushnell told the Advertiser.

“One of the points I wanted to make with the book,” Bushnell said in the interview, “is how easily the Hawaiian people welcomed the Japanese men.

“It’s a historical fact that every one of the men, except for the few who had brought Japanese wives with them, married Hawaiian women and became totally assimilated into the local culture.”

In his preface in “The Stone of Kannon,” Bushnell says he wrote the book after studying for many years the language and culture of Japan and “only after having lived in that country for 17 instructive months.”

Bushnell’s son Andrew said, “He studied and tried to figure out how the language worked. He could understand a great deal, although he couldn’t speak Japanese.”

Andrew Bushnell said his father was born in the Kaka‘ako district of O‘ahu when it was a working-class neighborhood and appreciated Hawai‘i’s “local style.” According to Bushnell’s Advertiser obituary, he was the son of Portuguese-Italian father and a Norwegian mother.

“He would talk about ‘us Hawaiians’ and ‘we Japanese.’ He identified with different people because he grew up with Japanese and Hawaiians and Portuguese and all in Honolulu. He just liked local people,” Andrew Bushnell said.

In the 1979 Advertiser interview, “Ozzie” Bushnell talked about how he was a bit uncomfortable writing the early history of the Japanese in Hawai‘i.

“Because he wasn’t Japanese, local Japanese readers would resent his telling of the arrival of their ancestors,” reporter Ronn Ronck wrote.

Although most could not read or write, Bushnell wrote in his preface, those first Japanese immigrants “all had been taught the virtues that count in the shaping of a man.”

“Those important virtues of on, giri, and gimu — in other words, the values of loyalty, gratitude, obligation, honor, courtesy, and industry — have enriched the lives of all of us who have grown up in the Hawaii the settlers from Japan and their descendants have helped to make.”

Such thoughts might have been in the minds of the prince and princess of Japan, who journeyed to Hawai‘i last week to mark the 150th anniversary of Japanese immigration to the Islands.

One of the first stops for Prince Akishino, the second son of Japan’s Emperor Akihito, and his wife, Princess Kiko, was Makiki Cemetery, where they offered their respects and prayers at the monument to remember the Gannenmono and the legacy that resulted from decision to come to Hawai‘i.

Richard Borreca is a veteran Honolulu journalist. He has worked for the Honolulu Star Bulletin, KHVH News Radio, KHON-TV, Honolulu Magazine and The Honolulu Star Advertiser, for whom he now writes a Sunday column.