The Honpa Hongwanji Mission of Hawaii recognized five individuals for demonstrating excellence and high standards of achievement in their respective fields at its “Living Treasures of Hawai‘i” program on Feb. 10 at the Hilton Hawaiian Village. The Living Treasures luncheon also served as the closing activity of the Honpa Hongwanji Mission of Hawaii’s 106th annual Giseikai, or legislative assembly.

Besides the introduction of the five new Living Treasures, Bishop Eric Matsumoto was recognized for his 25 years of service to the Honpa Hongwanji Mission of Hawaii.

“Twenty-five years in Hongwanji, 50 years of life. How can someone be so fortunate?” said Matsumoto, who was elected bishop in 2011. Matsumoto also thanked former Bishop Yoshiaki Fujitani and the Rev. Tatsuo Muneto for their guidance in his ministry.

Also recognized and thanked were the Rev. David Nakamoto and his wife Irene, who recently retired. Rev. Nakamoto served as Kailua Hongwanji Mission’s minister for seven years, during which time he oversaw the construction of a new temple building on the Kailua Hongwanji property.

Rev. Nakamoto thanked the Hawaii Kyodan (Honpa Hongwanji Mission of Hawaii) for the “terrific opportunity to share and connect as we embrace the Dharma together.” He also thanked Bishops Eric Matsumoto, Thomas Okano and the late Chikai Yosemori for their support and guidance.

“In this journey, your critics can be your greatest supporters,” Nakamoto said. He also thanked his Hawaiian teachers and mentors who taught him the meaning and beauty of the Hawaiian word, kalamai, meaning “I’m sorry; we must make things right.”

Dr. Mitchell Eli is a master in the traditional Hawaiian martial art of lua. He has helped to develop a new generation of leaders by stressing the development of character and leadership through the values of discipline and self-defense. Dr. Eli is also a chiropractor. He continues to educate others in traditional Hawaiian culture as a member of the nonprofit Royal Hawaiian Academy of Traditional Arts and as an author, consultant and mentor.

Hailama Vance Kihaa Pi‘ilani Kenichi Farden, one of Hawai‘i’s leading language and cultural resources, is often consulted as a giver of Hawaiian names. He has also had the honor of being called upon as a wailer of funeral chants. Farden, the grandson of a World War II 442nd Regimental Combat Team veteran, is also called on to serve as a Hawaiian language, chant and music judge for hula competitions in Hawai‘i as well as in Japan.

Mary Jo Freshley has dedicated more than 50 years of her life to the preservation, nurturing and promotion of Korean culture through the teaching of traditional Korean dance. Her love of dance extended to her teaching health and physical education at the Kamehameha Schools, where she integrated dance into the curriculum to share the diverse cultures of Hawai‘i. Freshley began studying Korean dance with Halla Huhm’s dance studio. After Huhm’s passing, she became the primary teacher and, eventually, its director. Freshley founded the nonprofit Halla Huhm Foundation, which supports activities relating to Korean culture. At age 83, she remains a living resource of traditional Korean dance as a volunteer director and teacher.

The late Takejiro Higa, who passed away in October 2017 — after he had been selected as one of the 2018 Living Treasures honorees — served in the Military Intelligence Service in World War II. Higa was always proud that he never had to fire his weapon and instead saved the lives of Okinawan civilians with his knowledge of Okinawan language, a dictionary and a megaphone. His story and the military and linguistic service of the MIS soldiers remained unknown to most people until their wartime work for America was declassified in the 1970s. He was among the World War II Nisei soldiers who received the Congres-
sional Gold Medal in 2011. Higa made his living as a tax examiner with the Internal Revenue Service. Even into his 90s, he continued to serve the community as a volunteer for Hui Makaala and Jikoen Hongwanji Mission and as a speaker at schools. Higa’s eldest son, Nelson, accepted the Living Treasure award on behalf of his father.

Gordon ‘Umialïloalähänauokaläkaua Kai — “Umi” to his friends — has been crafting Hawaiian weapons for more than 40 years and is today one of the foremost practitioners of the traditional Hawaiian martial art of lua. Kai is respected in Hawai‘i for his knowledge as a cultural practitioner and his generosity in sharing his skills as a master artisan, instilling pride in his heritage while preserving Hawaiian culture.

The “Living Treasures of Hawai‘i” program was inspired by Japan’s Ningen Kokuho (Living National Treasure) program. It was created by then-Bishop Yoshiaki Fujitani in 1976 at the suggestion of the late Paul Yamanaka, a local insurance executive who felt that was it important to honor those who contribute to the preservation of Hawai‘i’s distinctive cultural and artistic heritage. Its mission, furthermore, is to “recognize and honor individuals for their sustained contributions toward enriching our society.” The first person recognized as a “Living Treasure of Hawai‘i” was Charles W. Kenn, the descendant of a Gannenmono.

Since its inception, more than 200 Island residents have been recognized as “Living Treasures of Hawai‘i.” 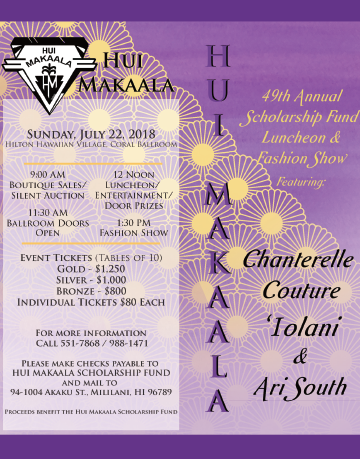