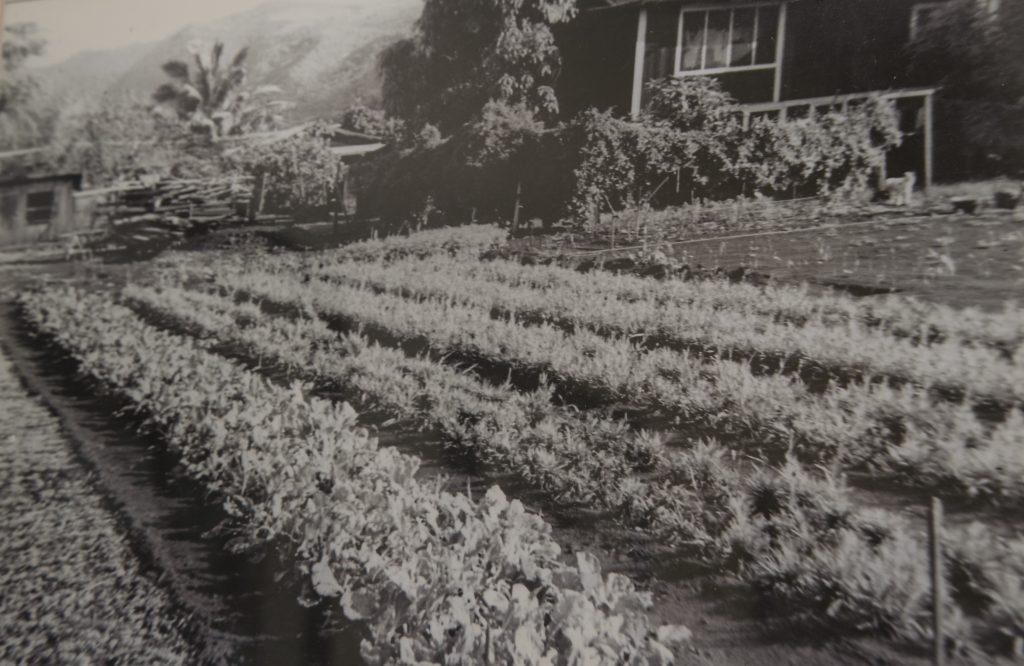 Matriarch of Watanabe Floral Has Enjoyed a Long and Full Life

When Sandra Watanabe-Lo wheeled her mother, Shizue (Katashima) Watanabe, into their 22,000-square-foot, family-run Watanabe Floral business on Nimitz Highway recently, it was to celebrate a special milestone: Watanabe’s 100th birthday.

“I always bring her here on all special occasions, like Christmas, Valentine’s Day and Mother’s Day,” said Watanabe-Lo, the youngest of Ernest and Shizue Watanabe’s six children. The Watanabes have been involved in the flower production and floral sales business for nearly three-quarters of a century.

Family members and the floral shop’s staff celebrated Shizue’s 100th birthday with cake and ice cream. The family matriarch sat under a beautiful display of flowers near the entrance to the shop, watching as the employees assisted customers as they entered the store and left with bouquets of flowers and containers of lei.

A grander celebration with some 300 invited family members and friends will be held later this month at the Hawaii Okinawa Center.

Shizue Watanabe was born in 1918 in Mänoa. For most of her married life, she worked every day at her family’s business, Watanabe Floral, now located between Nimitz Highway and Hart Street in Kalihi. She retired about five years ago. She also worked at all of the business’ previous locations: Wai‘alae, Koko Head and McCully.

Asked what she attributes her good health and longevity to, Watanabe replied, “I think it must be good genes.”

Watanabe’s father, Masaro Katashima, was 93 when he died in 1982, and her mother, Shizuko
(Fujiwara) Katashima, a picture bride, lived to the age of 87. Both were from Hiroshima. Shizue said she traces her lineage back to the Fujiwara clan, whose extended family ruled Japan during the Heian Period (794 to 1185). She said her father left Japan for Hawai‘i at age 17 to avoid being drafted into the Japanese army

Shizue Watanabe said the most significant events she witnessed in her 100 years of life in Hawai‘i were Japan’s attack on Pearl Harbor in 1941, “when Japanese Americans proved their loyalty to America and the United States retaliated and won the war,” and when Hawai‘i became a state.

In the early days of Watanabe Floral, Shizue said she supervised and worked with the women who processed the roses the company grew in Koko Head, Wai‘alae, Mililani and Waimea on the Big Island. The company stopped growing roses in 2009.

Besides working on roses, Watanabe-Lo said her mother “regularly cooked delicious lunches which she brought to work for family members to enjoy.”

“This is a hard-working family,” said Shizue Watanabe’s eldest son and current company president, Russell Watanabe. “My parents never smoked or drank. All my father and mother did was work, eat and sleep.”

Shizue said she was born in the vicinity of where Waioli Tea Room is now located in Mänoa.

“There was only another home there which belonged to the Teramoto family, but their boys were much older than me,” she recalled. “I don’t know exactly where my home was, and even after going back there several times, I could never find the place. So much has changed.”

Her father worked as a plumber in Mö‘ili‘ili; her mother taught sewing, but wanted to run her own store. Watanabe remembers walking from her home to the road in Mänoa every day to wait for her father, who rode a bicycle, because he always greeted her with a treat.

Watanabe said her family moved to Kapahulu around 1923. Her mother opened a small grocery store on Campbell Avenue. Wartime tensions forced the family to eventually sell the store, however.

Watanabe attended kindergarten at St. Mark’s Episcopal Church, moving on to Waikïkï Elementary School and Washington Intermediate School. She graduated in 1936 from McKinley High School, where she served as senior class secretary. Like many children of her generation, Watanabe attended Japanese school after English classes ended and on Saturdays. She was president of her class at Hawaii Chugakko, the Hongwanji Japanese School on Fort Street.

In June 1940, Watanabe graduated from the University of Hawai‘i, where she had majored in English and social studies with a minor in library science. She was featured in a June 18, 1940, Honolulu Star-Bulletin story after being named UH’s best scholar, scoring 368 points out of 400 points. The university’s Phi Kappa Phi honor society recognized her for her outstanding record.

Back then, Watanabe told the Star-Bulletin that she attributed her high college grades to cramming before exams. “I have a grand time ordinarily,” she told the reporter, “but I just go crazy during exam week.”

Phi Kappa Phi awarded her a $20 scholarship, which she used the following year to earn her fifth-year teaching certificate.

Shizue met her future husband, Ernest Watanabe, while working towards her teaching certificate. He had earned his bachelor’s degree in chemistry from UH in 1935 and was working for the Hawaiian Sugar Planters’ Association as a research chemist.

After completing teacher’s college in 1941, Watanabe took a job as acting principal of Kalapana Elementary School in a remote fishing village 30 miles south of Hilo on the Big Island. There were only three teachers. Watanabe was not only the school’s principal, but also taught grades four, five and six. She also doubled as the village’s telephone operator. After Japan’s attack on Pearl Harbor, the military took over the facilities at Kalapana because it was considered a possible landing site for invading Japanese troops. Watanabe was transferred to Ola‘a School and given the job of librarian. She worked there until 1945 and also worked as a Red Cross nurse’s aide at a hospital in Mountain View.

The war brought other changes.

Ernest Watanabe was drafted into the 100th Infantry Battalion. While in training, he was transferred to the Military Intelligence Service and sent to Camp Savage, Minn., for Japanese language training. His long-distance courtship with his future wife continued from Minnesota via censored mail.

Ernest Watanabe was assigned to Australia, where he translated captured Japanese documents and served in Gen. Douglas MacArthur’s headquarters. While in Brisbane, he grew flowers outside his barracks to remind him of home and Shizue.

In 1945, Ernest was granted emergency leave to attend his mother’s funeral in Hawai‘i. By the time he arrived home, the funeral had already been held. Since he was home, however, he and Shizue decided to get married before he returned to Brisbane. The couple wed on May 17, 1945. Ernest developed a foot injury and was hospitalized. The war ended in the meantime and he was discharged.

Shizue Watanabe never returned to teaching. She became a wife, farmhand to her husband’s farming ventures and a mother. The Watanabes raised six children: Joanne, Wesley, Russell, Louise Davis, Leland and Susan Watanabe-Lo. All of their children did their share of growing, harvesting, prepping and delivering roses.

Two of their sons — Russell and Leland — currently work for the company. Russell is Watanabe Floral’s president, and Leland is its director of purchasing. Leland’s sons have joined the company, as well: Landon is the delivery dispatcher, and Justin is operations manager. Their mother, Kathy, manages Watanabe Floral’s Waipahu store, which opened in 1992.

The family business actually began humbly in the 1930s when Earnest’s father, Yonekichi Watanabe, an immigrant from Fukushima, began growing a few vegetables and flowers on a one-acre truck farm in Mö‘ili‘ili, near the University of Hawai‘i. He and Ernest would deliver the vegetables and flowers on their horse-drawn wagon to eight florists in Honolulu, including Beretania Florist, Stanley Ito Florist, Fujikami Florist, Nuuanu Florist and Paradise Florist.

In 1945, Ernest Watanabe started Watanabe Roses on Farmers Road, near the current site of Kahala Mall. He was joined in the venture by Shizue’s father, who grew flowers and vegetables. From 1948 until 1968, Watanabe Roses also raised roses on about four aces of land in Koko Head until they lost their lease when the state decided to build Kaiser High School. From 1968 to 1978, they farmed 14 acres in Wai‘anae.

In 1978, the company moved its growing operations to a 17-acre farm in Mililani. A year later, it began growing flowers in an eight-acre greenhouse in Waimea on the Big Island. Between 1985 and 2009, Watanabe Floral grew 25 varieties of roses in four primary colors, producing about 250,000 roses annually.

These days, Watanabe Floral purchases most of its flowers from outside of Hawai‘i — from Japan, Southeast Asia, Australia, the South Pacific, Central America and Holland. But about 15 to 20 percent of its flowers — blossoms such as anthuriums, orchids, ginger, heliconia and other tropical foliage — are grown in the Islands, said Leland Watanabe.

A 1963 Star-Bulletin story reported that Watanabe Floral was a $6 million a year business with 100 employees. The company was selling flowers to 95 percent of the state’s 300 florists and their approximately 2,000 clients, including hotels, restaurants, churches and interior decorators.

In 1986, Watanabe Floral began doing business at its current location on Nimitz Highway. Russell Watanabe said they initially leased the 32,000-square foot parcel. The company purchased the property three years later and renovated it to include a 4,000-square foot refrigerated room.

Now into its fourth generation as a family-operated business, Watanabe Floral employs 75 full-time and part-time workers at its two stores, both of which are open daily except Sundays. The company does business with 100 florists and 500 businesses, including wedding planners, floral designers, Foodland and Target stores.

Russell Watanabe recalled that his father started selling roses to the general public at their Kalihi store in 1987 because of their surplus stock. Taking a cue from a practice that Island bakeries used to sell day-old bread, “He put a sign outside of the store that said ‘$3 a dozen,’” said Russell.

Shizue Watanabe said the most significant thing that occurred in her life was meeting Ernest, marrying him and having their family. “Another extremely significant thing was joining the Church of Jesus Christ of Latter-day Saints with my husband,” she said.

“This brings her great comfort and she says she knows she will be reunited with him and they’ll be together eternally,” Watanabe-Lo said. “She always talks about my dad’s last words to her before he passed away at age 91. It was, ‘I’m going first; I’ll be waiting for you.’ He squeezed her hand, closed his eyes, then he was gone.”

Until that day comes, Shizue Watanabe will continue to count on her good genes, healthy meals and positive outlook on life.

Gregg K. Kakesako worked for the Honolulu Star-Bulletin, Gannett News Service in Washington, D.C and the Honolulu Star-Advertiser for more than four decades as a government, political and military affairs reporter and assistant city editor.