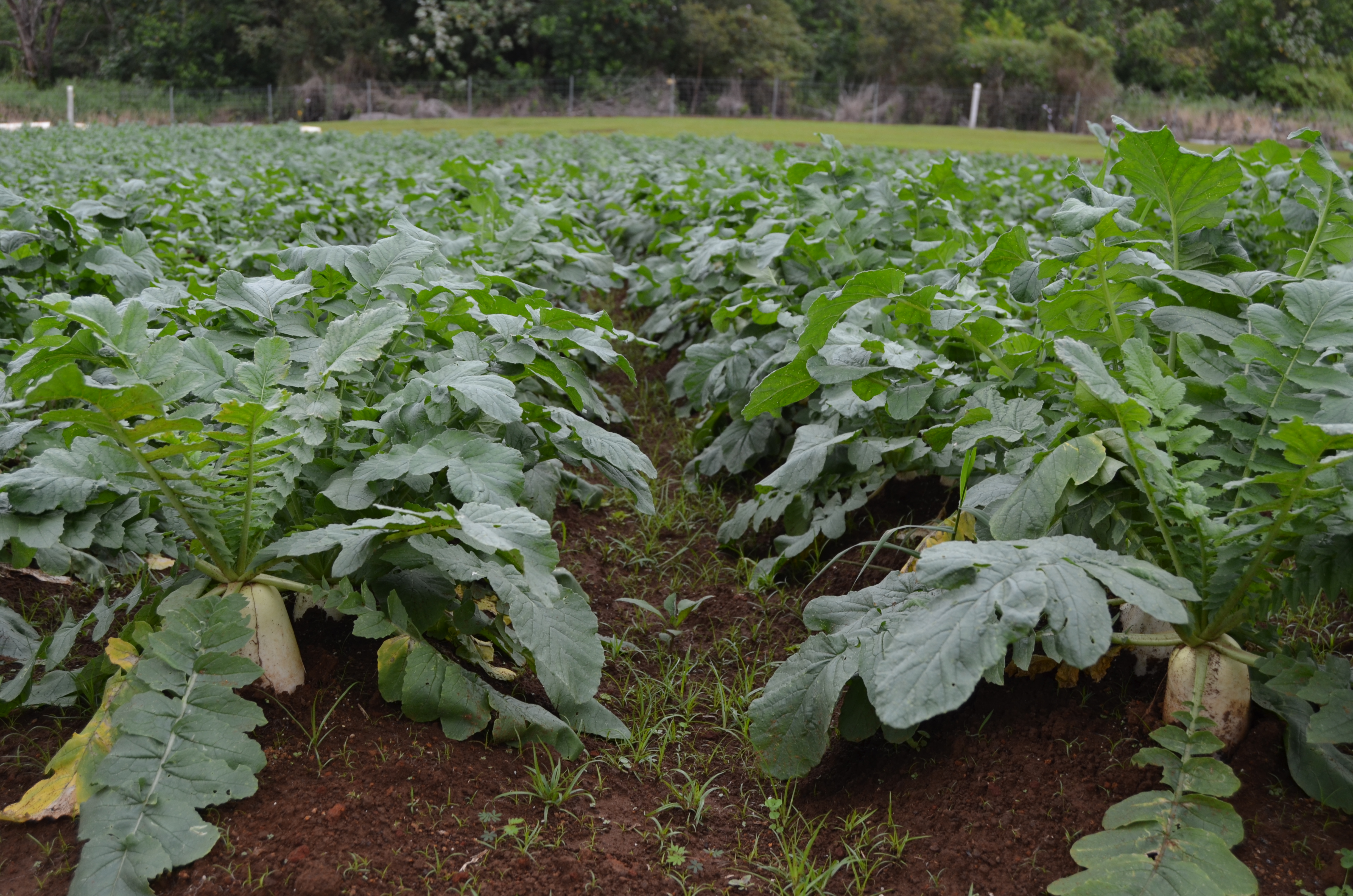 From Farm to ’Fridge, Naoki and Rose Honda are Keeping Tsukemono Culture Alive

Tsukemono just might be one of the most underrated components in Japanese cuisine. Many local folks have grown up with that simple side dish of pickled veggies that provides a refreshing crunch and palate-cleansing sparkle at every meal.

In the old days, tsukemono was almost always made at home with whatever grew in the family garden or was given to them by friends and neighbors. Daikon (radish), won bok (Chinese cabbage), tamanä (cabbage), radish, mustard cabbage and rakkyo (Chinese onion) were among the favorites. Some were simply salted and placed in a crock with a cover of some kind and a heavy stone on top, while others were pickled in vinegar and seasoned with shöyu, sugar and other spices.

Very few folks make their own pickles anymore. On the Big Island, that role has largely been assumed by Naoki Honda and his wife, Rose, who own and operate Honda Food Processing in Hilo. There, in a 3,000-square foot space in the Kanoelehua Industrial Area, Honda Foods prepares a variety of pickled products made with locally grown produce.

Honda himself isn’t exactly sure how he ended up as the one keeping the tsukemono tradition alive on the Big Island. He was born and raised in Tökyö, the son of a government worker. “Nobody in my family was a farmer,” he says with a shake of his head, “but, somehow, I love agriculture.” Honda’s mother told him that as a child he loved to grow things in the family’s modest backyard — even going out in the rain to water his prized plants.

Honda pursued his passion for growing things through high school and college. He attended Tokyo University of Agriculture, where he enrolled in a program that required students to experience hands-on work in order to graduate. “You must work at least three months on a farm either inside or outside of Japan,” he explains.

Anxious to experience life overseas, Honda considered going to Brazil. In 1978, however, his fate was determined by an international farm association headquartered in San Francisco, which, each year, assigned some 100 applicants to farms and ranches throughout the United States. Before he knew it, Honda found himself reporting to work at Diamond Head Papaya in Kea‘au.

Honda’s first local venture turned out to be a lunch shop called Honda Okazuya on Kïlauea Avenue in downtown Hilo. “I’m not sure how I know, but I can cook,” he says. What he did not know, however, was how to cook “Hawai‘i-style” Japanese food, so Honda hired a woman who had recently retired as a deli cook at KTA Superstores. The woman worked for Honda for a little more than two years, teaching him how to prepare Japanese food attuned to the local palate.

It was around this time that Honda started to make tsukemono, working out of a location off of Keküanaö‘a Street. Prevented from making takuan by the terms of his lease, he starting off making just three products: ichiya zuke (overnight pickles), won bok kim chee and cucumber kim chee.

In 1987, Honda was ready to make his move. “My father came here with his friend who was in the pickle business,” Honda explains. After a quick survey of the market, his father’s friend concluded: “Your son can do pickles.” He instructed Honda to go to Hokkaidö, where there were large takuan producers. “Lots of land over there, so daikon is cheap,” he explained.

Honda took the advice and went to Hokkaidö for a few months to study takuan production. He leased his current property on Maka‘ala Street and acquired the equipment he needed to get started. No amount of research, however, could fully prepare him for instant success in Hawai‘i.

Although his father’s friend had said, “If you can make takuan, you can make anything,” Hawai‘i proved to be a completely different market. “Japan takuan more salty,” Honda says. “Hawai‘i is much sweeter — lots of sugar.” He bought and tasted every different brand on the market, adjusting his recipes along the way.

Other takuan tidbits Honda picked up along the way were: 1) Although people in Japan are used to buying their takuan whole, Hawai‘i people like theirs already sliced; 2) Hawai‘i folks like their tsukemono packed in containers, not in bags; and 3) In Hawai‘i, takuan gotta be yellow. “One Japanese old man, he tell me my takuan look ugly,” Honda says. “Japanese style is more natural color, but in Hawai‘i, it is really bright, bright yellow!”

As if perfecting his products were not challenging enough, Honda also had much to learn about navigating Hilo’s tightly knit, small town network of relationships. “Now days, no discrimination,” he says, but that was not the case when he started. With no relatives or local contacts to aid his transition, he ran headlong into attitudes like, “Who you?” and “Where you from?” He remembers driving down to the waterfront to ship his products to O‘ahu. “The forklift driver start yelling at me. He don’t know me. Now they know me, so no problem,” Honda adds.

Through trying times, Honda derives his greatest support from his wife, Rose, who came to Hawai‘i from Brazil through the same association that had brought Honda here some 15 years earlier. Rose even worked at the same papaya farm in Kea‘au. They married and had a son, and Rose has worked alongside her husband for the past 25 years.

In spite of his hard-earned success, Honda warns of some dark clouds amidst Hilo’s often rain-soaked skies. Most concerning, he says, is the declining number of farmers. “Used to have a lot of farmers, especially in Volcano and Waimea,” he says. “Chinese cabbage, cucumber was easy to get. Now, most of the farmers retire and their kids don’t want to take over. Only a few left.”

Thus far, however, Honda has not had to import vegetables from outside the Big Island.

“KTA helped me connect with farmers,” he says. “KTA helped me a lot. Not just selling.” Still, he worries: “Lots of good people retire. What is going to happen?”

Daikon, the key to Honda’s business, remained in critically short supply. Never one to back down from a challenge, Honda took the term “homemade” to the next level when he began growing his own daikon behind the Kaumana home he and Rose purchased some 10 years ago. He estimates that about 1.5 acres of the total 3.5-acre property is planted with daikon.

Each crop takes about two months to mature. Every two weeks, Honda harvests about 12 lines, each about 100 feet long. The harvest yields about 4,000 pounds of daikon. “Without this, we would be out of business by now,” Honda says of his prized white radishes.

Farming their own daikon extends the couple’s already long hours, which begins around 3 a.m. Along with their four employees, production work is usually completed just past midday. “Lots of work — from washing to packing — we still do by hand,” Rose says. “We have a washer and a slicer, but we still wash the produce several more times by hand . . . . . you can’t be too careful.”

The couple gets home in the early afternoon and squeezes the remaining hours of daylight working on the farm. After an early dinner, they get some sleep and start all over again the next morning.

Surprisingly, growing daikon is Honda’s first true farming venture. “I never worked in the land. I studied agriculture, but never grew anything like this,” he admits. He carefully selected the best variety of daikon for his land, learned how to prepare the soil and how to battle Hawai‘i’s prolific bug population. Honda does not use chemicals. Although a labor-intensive process, he protects his newly sprouted daikon plants from insects by carefully covering them with a fine mesh white net.

Today, Honda estimates that about 80 percent of his products are sold in Hilo — mainly at KTA Superstores. The remaining 20 percent are distributed to markets in Kona, Maui and Honolulu, including to Marukai. Besides his own label, Honda took over some of the pickle products made by Ono Gourmet when its owner retired. He also produces Mountain Apple brand products for KTA, such as ogo namasu.

Honda worries that the market for his goods will slowly diminish. “Now days young people eat hamburger and chips. Not rice and tsukemono,” he observes. Still, washoku — the term used to describe traditional Japanese meals based on rice eaten with various side dishes, miso soup and tsukemono — was placed on the UNESCO Intangible Cultural Heritage list in 2013.

Whether eaten with a humble bowl of ochazuke (rice and hot tea) or the most elegant multicourse kaiseki meal money can buy, tsukemono remains deeply woven into the centuries-old traditions of Japan.

In its own humble way, Honda Foods helps to sustain that culinary legacy — a mission that first sprouted in the cramped backyard that Naoki Honda knew as a child in Tökyö and now flourishes in his immaculately cultivated farm on the slopes of Kaumana. “We’re surviving,” he says. “We started in 1985 — so over 30 years in business now. I guess we OK.”

Rose agrees. As she had often counseled her husband in the early going, she says, “Regardless of what happens, if you are honest and work hard, people will come to trust you.”

Time has proven her right. “This is home now,” she concludes.