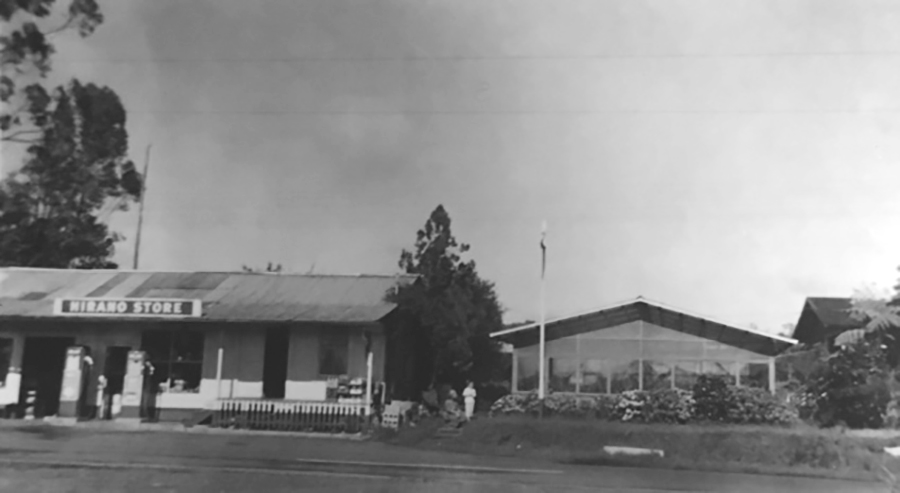 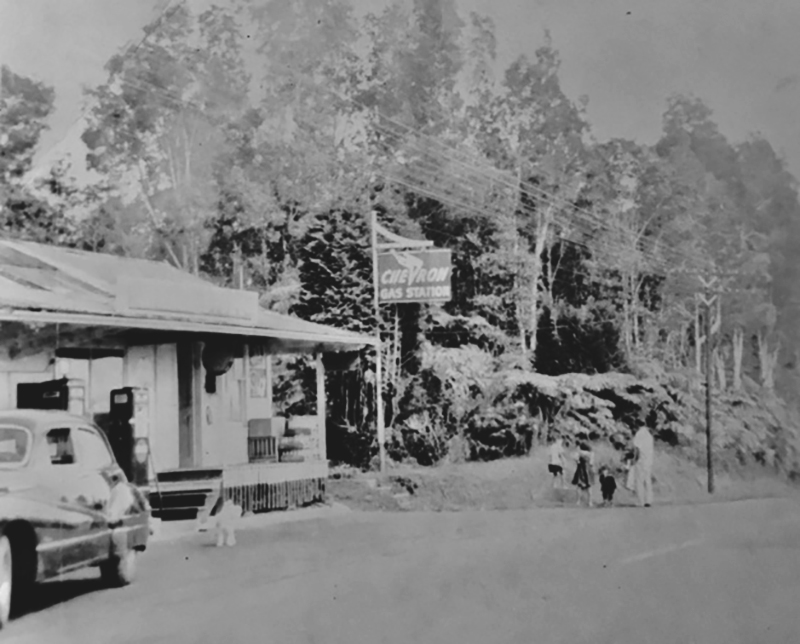 From Issei Entrepreneur to Sansei Business Major, Hirano Store Has a Rich History

Buckets of rain had been falling in East Hawai‘i all week long and it looked like it was going to be another soggy and overcast day. But the gloomy weather couldn’t dampen the spirits of 91-year-old Mieko Nagao this past Feb. 17. Nagao had already made plans with her son Owen, visiting from Long Beach, Calif., to accompany her to the festivities taking place at her nearby Glenwood neighborhood store. 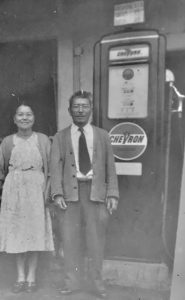 The celebration of the 100th anniversary of Hirano Store — the beloved and always reliable small-town business that has been providing groceries and other essentials for the small communities in the Volcano and Ka‘ü areas for a century — was definitely a milestone to celebrate. Judging by the long line of cars parked along the shoulder of Highway 11 (often referred to as the Hawai‘i Belt Road or Volcano Highway), well-wishers weren’t letting the rain stop them from celebrating Hirano Store’s 100th birthday.

Everyone who attended the celebration called the rain “a blessing,” including sansei family member Eric Inouye, who assumed the reins of the store 34 years ago. He and his wife, Lisa Faulkner Inouye, were all smiles as they welcomed family members and Hirano Store’s longtime customers and friends.

The festivities began with a mid-morning invocation by Pastor Alex Pacheco of the Hale Pule Keolahou Church and words of gratitude from Inouye. He thanked everyone for keeping the general store in business since 1918. The rest of the day was spent celebrating with live entertainment; free drinks, hot dogs and Hirano Store’s signature chili; and giveaways of T-shirts, plate lunches, coolers and other items. 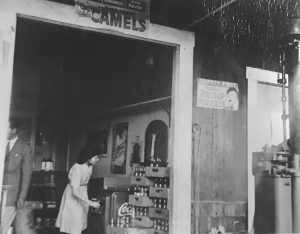 Inouye, who is 60, wanted Hirano Store’s local customers to be the main focus of the celebration, for they have always been the backbone of the business. It was something Inouye had focused on even back in 1984, when he leased the store from his uncle and aunt, Wataru and Shinae Hirano.

“I want to take care of the locals, because they are the ones that will be coming back,” said Inouye.

“I have a business degree, so my goal was to have my own business one day. So, I was thankful when this opportunity came up. My purpose was to be my own boss and to have a successful business,” said Inouye, who graduated from the University of Hawai‘i at Mänoa.

“A hundred years is definitely something,” said Owen Nagao as he enjoyed the festivities with his mother, Mieko. Nagao, who graduated from Baldwin High School on Maui, met Inouye when they were freshman dormies at UH-Mänoa’s Hale Aloha Lehua dormitory.

“We used to cruise around together a lot — football games, parties, nightclubs,” recalled Inouye.

“I had no idea and was pretty surprised about the idea of him running a store, of all things,” said Nagao upon learning from mutual friends that Inouye was taking over the store. On one of his visits home from California, Nagao, who retired from Boeing as an engineer and manager, dropped by the store and the two renewed their friendship. Since then, visiting with Inouye is a regular stop on his visits with his mother, who turned 92 a month after the celebration.

“Now that I’m retired, I can come more often and spend maybe a month with her. We all take turns; we don’t like to leave her alone very much,” said Nagao, who, like Inouye, is 60. The five Nagao siblings — two in California and three on O‘ahu — take turns spending time with their mother, visiting for sometimes just a weekend or as long as a month or more. Since their father’s passing in 2003, all five Nagao siblings try to return to the Big Island to celebrate her birthdays.

Originally from Tökyö, Mieko had accompanied her late husband, the Rev. Norito Nagao, a Jodo Shinshu minister, on his various Honpa Hongwanji assignments. When he retired, they decided to settle in Kurtistown, a stone’s throw away from where he was born in Mountain View.

Mieko and Owen enjoyed connecting with their Glenwood neighbors that morning. Mieko also spent some time examining the inventory of canned goods on the store shelves.

The founders of Hirano Store, Naojiro and Shige Hirano, emigrated from Shizuoka, Japan, and settled in Glenwood over 100 years ago, according to their granddaughters, Naomi Hirano-Omizo and Phyllis Sano. Naojiro arrived in Honolulu aboard the steamship Tenyu Maru in 1908 and initially worked on O‘ahu at ‘Ewa Sugar Plantation and then at a plantation in Wahiawä before moving to Hawai‘i Island, where his older brother Magosaku lived.

Magosaku urged Naojiro to study English at the Hilo Boarding School, so he did, commuting to Hilo from Mountain View, where he had settled. Naojiro attended night school and began working at the ‘Öla‘a Plantation Store, eventually becoming the assistant manager, said the sisters.

“While working at the store, Naojiro became a Christian, as he fell in love with the Christian hymns he heard emanating from the walls of the ‘Öla‘a Japanese Christian Church near the store,” said Phyllis.

In time, Magosaku suggested that Naojiro marry his wife’s younger sister, Shige Hanai, who was from a neighboring village in Shizuoka. Shige arrived in Honolulu and was met by Naojiro. They were married on May 27, 1916, at Makiki Christian Church. The couple settled in Mountain View soon thereafter.

After the birth of their first son — and now with retail management experience that he had garnered working for the plantation store — Naojiro leased a small strip of land five miles south of Mountain View, across from the Glenwood Station. It was the last stop on the railroad line that ran along the Hämäkua coast through Hilo and then down to the communities south of Hilo. It was the ideal location for a general merchandise store. A natural and logical hub, Glenwood Station was a popular watering hole for people traveling to Volcano and beyond by horse and carriage.

With help from a carpenter-friend, Naojiro built a small wooden structure and proudly raised his handwritten “Hirano Store” sign in front of his store, said Naomi, a Japanese language teacher at Punahou School. She recalls that the store was located next to Glenwood School, a one-room schoolhouse with just one teacher, a Mrs. Orvis, who was a strict, yet kind and generous educator who gave thoughtful, hand-picked gifts to each student at Christmas.

Naojiro enjoyed learning. He took correspondence courses in Japanese language from Waseda University in Tökyö and established the Glenwood Japanese Language School across the street from his store, near the train station. Most of the Nisei in the community

attended his school after their mandatory English school. The school thrived and soon Shige began teaching Japanese with her husband.

As the Glenwood community flourished, Naojiro met its increasing needs. He began a charcoal business and started a post office in his store. And, he launched a taxi service and raised vegetables and flowers. He also served as a Japanese Consulate agent, helping residents who were Japanese citizens complete their annual paperwork for submittal to the Japanese government.

But Naojiro would pay a price for his Consulate work. Following Japan’s attack on Pearl Harbor on Dec. 7, 1941, Naojiro was arrested and sent to the Kïlauea Military Camp at Volcano. He was then shipped to Sand Island on O‘ahu and then sent to San Francisco. It was the beginning of what turned out to be a four-year odyssey of incarceration at several internment camps on the U.S. mainland in locations such as Louisiana, Tennessee, New Mexico and Montana. In his father’s absence, Naojiro’s and Shige’s second son, Wataru, ran his family’s story. When Naojiro finally returned to his family and their businesses, he greeted his family with his usual optimism and energy.

“He told his family that the four years had been like a college education for him! Can you believe that?” said Naomi. “He took this opportunity to learn from his well-educated fellow internees and learned about accounting, bookkeeping and horticulture. He was a camp warehouse supervisor. He was amazingly forgiving of the United States and loved this country,” said Naomi of her industrious and versatile grandfather.

In 1952, Wataru married Shinae Yanabu of Mountain View. They took over the store in 1962 when Naojiro died of leukemia.

“After I got married, I began helping around the store. I recall the old store, especially the wire by the window where Grandpa hung the aluminum lunch canisters,” remembered Shinae.

“Grandma Hirano sewed ‘kappa’ rain jackets using their thick muslin fabric and coated them with layers of linseed oil. At first, they were bright yellow, but gradually turned darker and black. The old-timers used to say, ‘You can forget your lunch, but don’t forget your raincoats!’ Glenwood has always been known for its rain,” said Shinae, laughing.

When the old Volcano Highway was widened in the late 1960s, the original store had to be demolished. The second generation of Hiranos decided to invest in a new steel building that was set back from the highway and took out a small business loan. The building was completed in 1968. A grand opening for the new store was held on what would have been Naojiro’s birthday, March 3, 1969. The Hiranos continued operating the store until they retired in 1984. That’s when Shinae’s nephew, Eric Inouye, took over the business.

“I was very glad that cousin Eric took over the reins very successfully,” said Phyllis. “Growing up at the store, I remember the very long hours both of my parents put in for seven days of the week; only on Sundays did they close for half a day, and they rarely took holidays. My parents were able to pursue vacations; serve at church; and for my mom, Shinae, to pursue a degree from UH-Hilo in Japanese, graduating with honors.”

Eric Inouye was careful not to stray too far from the Hiranos’ proven track record of success, although he did make a few changes.

In 1999, when Environmental Protection Agency laws grew stricter, he stopped selling gas. He added homemade chili to the menu of popular local foods and discontinued the canned version. “People didn’t like it. It wasn’t a good seller. So, I started adding a little bit of this and that, then finally decided I might as well just make it from scratch,” said Inouye about Hirano Store’s now-famous signature dish made from ground beef, Portuguese sausage, bacon, jalapenos and black olives, which adds a unique flavor to the chili. It’s a big seller, along with breakfast items and lunch specials.

“I cater to the locals and that’s what’s kept me going,” said Inouye, noting that visitors from all over the world also drop by the store while on their way to or returning from visiting Kïlauea volcano in Hawai‘i Volcanoes National Park.

Inouye said running Hirano Store has been the best business and personal experience of his life — a blessing, like the rain that continued to fall lightly on that special 100th anniversary day.

“It’s making me a stronger person in all areas, the decision-making, growth, failure, personnel . . . all of it,” said Inouye. “I would like to see it continue on in the family. Overall, I’ve been so blessed in so many ways!”

Hilo resident Patsy Iwasaki is a former Hawai‘i Herald staff writer. She teaches in the English department at the University of Hawai‘i at Hilo. Iwasaki is also continuing work on her historical documentary film, “Honoka‘a Hero: The Story of Katsu Goto.” The film’s trailer can be seen at katsugotomovie.org. 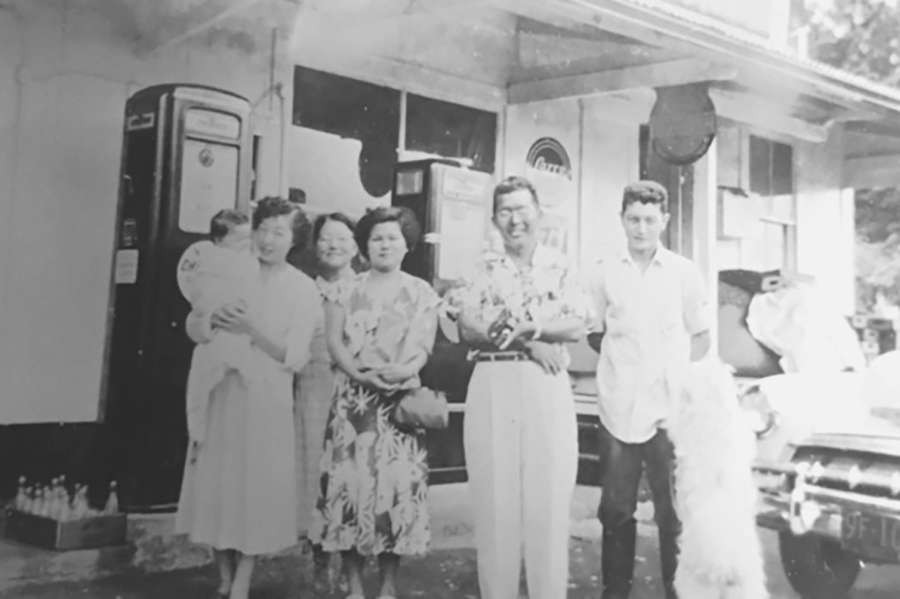 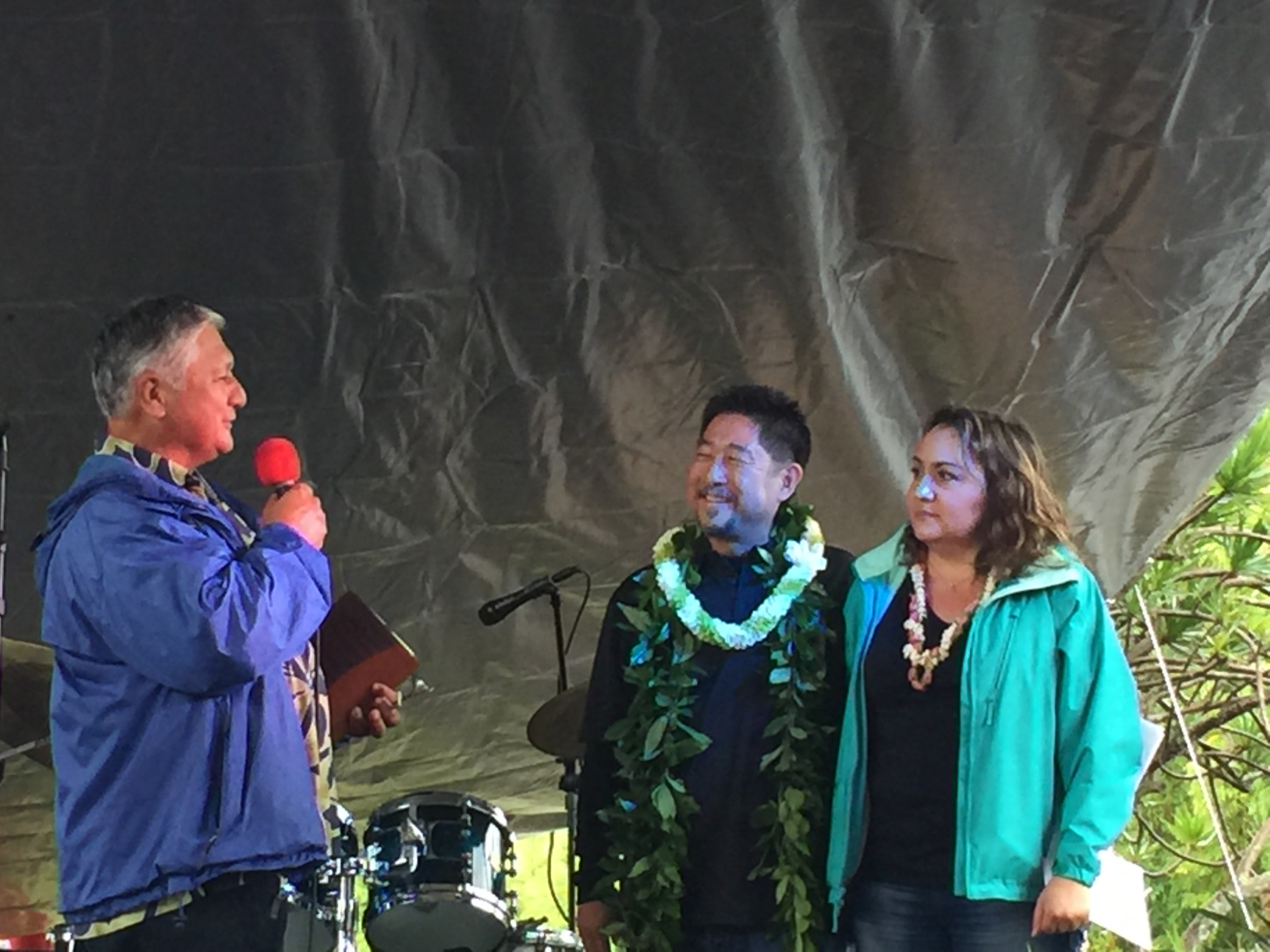 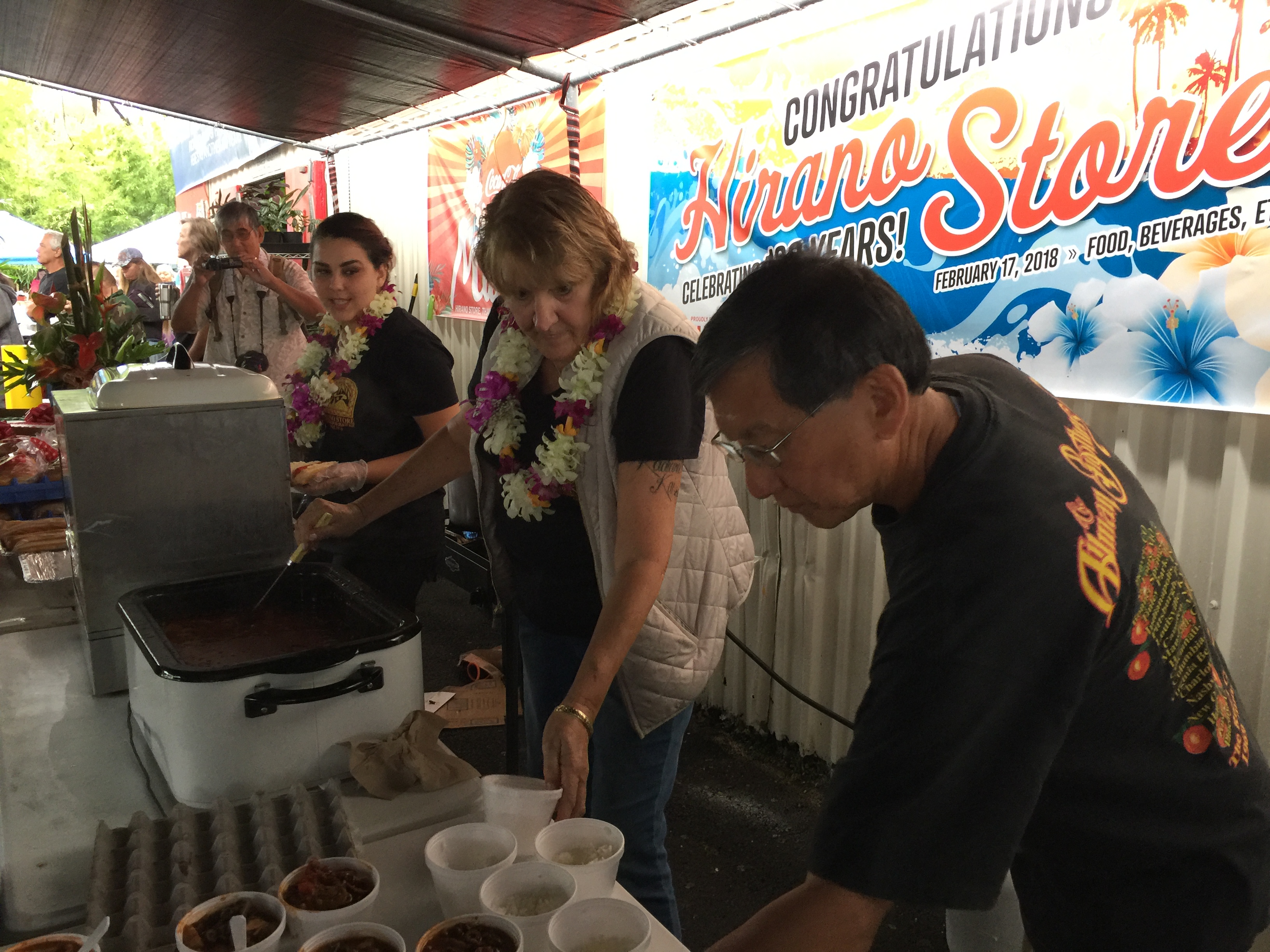