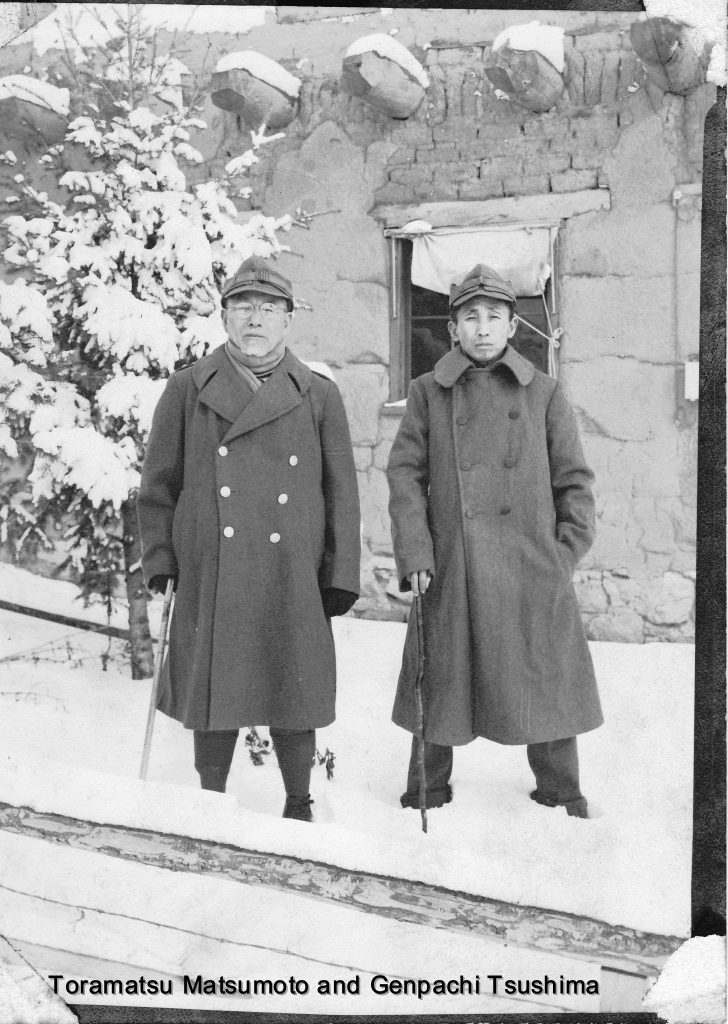 The following interview write-up is the second of seven that will be published in The Hawai‘i Herald this year in conjunction with the 75th anniversary of the opening of the Honouliuli Internment Camp. It is part of a series titled, “In Their Own Words.” In 1980, I was fortunate to have interviewed seven former internees of Honouliuli Camp and Sand Island Detention Camp when their memories of their incarceration were still quite vivid. (For the backstory of these interviews, please see the March 16 edition of the Herald.)

The internees are: The Rev. Gyokuei Matsuura, Mrs. Haru Tanaka, Mr. Shigeo (Robert) Muroda, Mr. Dan Nishikawa, Mr. Shinzaburo Sumida, Mr. Edgar Genpachi (Jukichi) Tsushima and Mr. Harry Urata. These write-ups were crafted from extensive notes taken during the interviews and will become part of a book I plan to write, tentatively titled, “In Their Own Words: Issei, Nisei, and Kibei Share Their Stories of Being Interned in Hawai‘i During World War II.”

I would like to extend a courtesy to the families of the interviewees by showing them the write-ups before they are published. However, I have not yet been able to contact the families of Rev. Matsuura, Haru Tanaka, Dan Nishikawa and Harry Urata. If you, or anyone you know, is related to one of the interviewees, please contact me or have the family member contact me at (808) 942-4783 or gail.honda@hawaii.rr.com. — Gail Honda, interviewer and author

The following interview with Edgar Genpachi (Jukichi) Tsushima was conducted in the spring of 1980.

I am 82 years old and moved to Hawai‘i from Japan when I was 20. My father was here 10 years before I came and was working on a plantation. I was going to teachers’ college in Japan and came to Hawai‘i two months before graduation. Otherwise, I would have been forced to teach there.

At first, I lived on a Waipahu plantation for two years. I taught Japanese language in Honolulu from 2:30 to 5 p.m. Earlier in the day, I went to English school. I went to McKinley and graduated from there. I taught Japanese for many years. At UH (University of Hawai‘i), I taught literature and language. At first, I intended to go back to Japan and teach English.

But then Pearl Harbor was attacked. I was employed as a reporter at Hawaii Hochi. The morning of December 7, I was going with a photographer to interview someone and was stopped by a policeman. On Saturday night before the attack, my wife and I acted as a go-between for a ceremony. My friend, for whom I acted as a go-between, came over that Sunday to thank me. I couldn’t believe a war was on. I listened on short-wave radio that Japan announced war.

I was an alien at the time and all my children were American citizens. I lived in Japan until I was 20 years old and had torn feelings. On December 7, 500 to 800 people were taken to Sand Island. They usually stayed a couple of months then went to the Mainland. I was first sent to the Immigration Station. I stayed three to four days and then went to Honouliuli in May or June of 1943. I stayed for three months. Many were taken before me. Then I was sent to Santa Fe (New Mexico Justice Department Camp) on the ninth (second to the last) boat to the Mainland.

Honouliuli was an Army camp and they treated us well. The food was good. Once a month we could see our families. Our families were driven to the camp in Army trucks. We could also write to our families twice a week, but our letters were censored at first. We wrote to our families for what we needed.

At Honouliuli, there were also South Americans from Peru and Brazil, and people from the Mainland. Altogether, there were about 200 people. There were different places for different people. Women were in a separate place, but there weren’t many, maybe three or four. One was the wife of a man who helped a Japanese pilot on Ni‘ihau.

Another group was the Germans, and there was a POW camp. But we cannot go in, only see it. We were surrounded by barbed wire, and there was a field for softball. Santa Fe was more organized. They had a golf course. It was nine holes, no grass, and the fairway and greens were all sand.

At Honouliuli, there were about 10 to 12 cottages, eight to 10 people in one cottage. It wasn’t crowded. Each cottage had its own bathroom. The guards were strict, but friendly. The camp commander was Sgt. Loveless. But he was too nice to us so he was demoted. He overlooked a lot of things. For example, meetings between internees were not allowed, but the sergeant overlooked it. Some internees made wine from canned grapes, and he overlooked that too.

Camp was very regulated. We had inspection once a week. Bed-making and cleaning were very strict and done the Army way. We all have to be ready by breakfast, so bells rang to regulate us. The first bell was to “get ready.” The second bell was to “get up and go.” They shut the lights at certain times, and 9 o’clock p.m. we have to go to bed.

Cooking was done by internees. We had a Japanese cook so cooking was done the Japanese way. For breakfast, we had miso soup, tsukemono (pickled vegetables) and every time, rice. They usually supply us with what we wanted.

At Honouliuli, we were allowed to read English papers. Many internees collected seashells. One man did nothing but make toys for his children. There was lots of wood, so every day he made toys out of the wood. We had woodworking and painting materials. Some people used toothbrush handles and made things. Some families brought us books. Some people played go (Japanese chess). Some had musical instruments and knew Japanese music and brought in shamisen. At night time, we talked story.

Honouliuli was monotonous, not like Santa Fe. Mainland camp was more interesting. We had movies twice a week. Honouliuli was kind of boring. Nothing to do. At Santa Fe, there was a single men’s camp, no women. There were gardens, kitchens, where we could work. Every night there was a news broadcast. After supper we would call people in and they would tell us the news at Santa Fe.

At camp, the Army said, “You are not prisoners, you are only an internee. For your security and safety, we keep you here.” I was in because I taught Japanese school. They thought that I had a close connection with the Japanese government, but that’s not true. They didn’t say anything about my working at a Japanese newspaper, but I taught Japanese language for over 20 years.

At Honouliuli, privileges were taken away when you broke camp rules. There were some bad sorts in camp, like gamblers, and those who try to fight. Some have connections with Japan.

The treatment at Honouliuli was very good. Only we thought we were interned for nothing. We didn’t do anything bad. We cannot live together with our families. That’s the part we complained about. 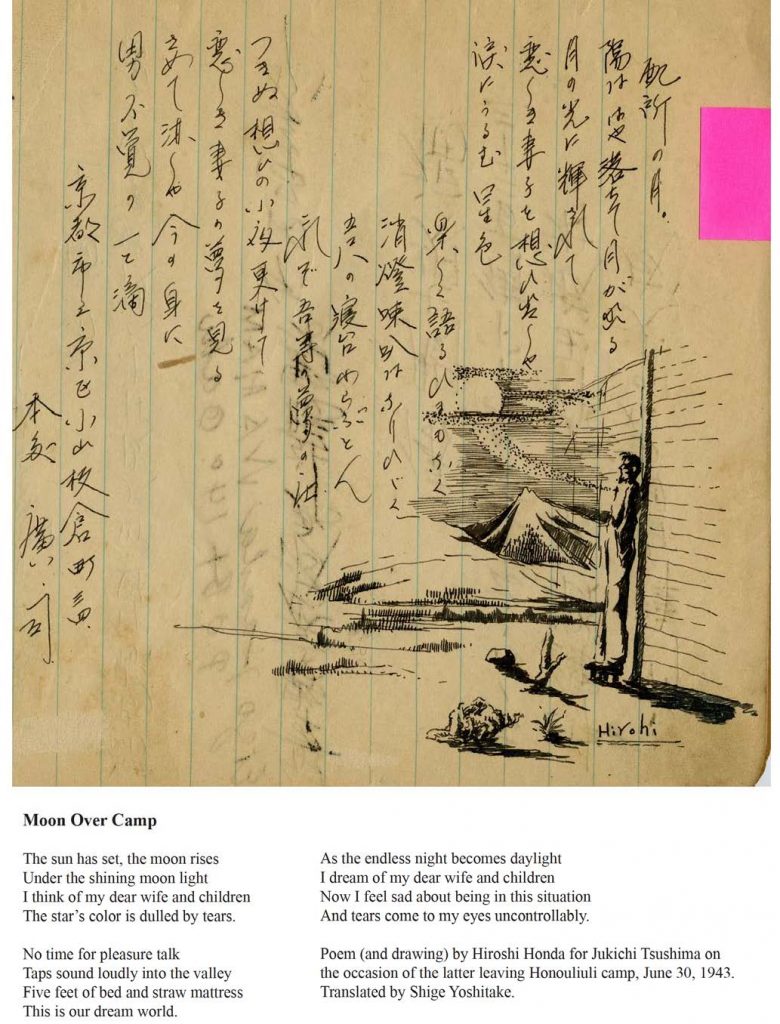 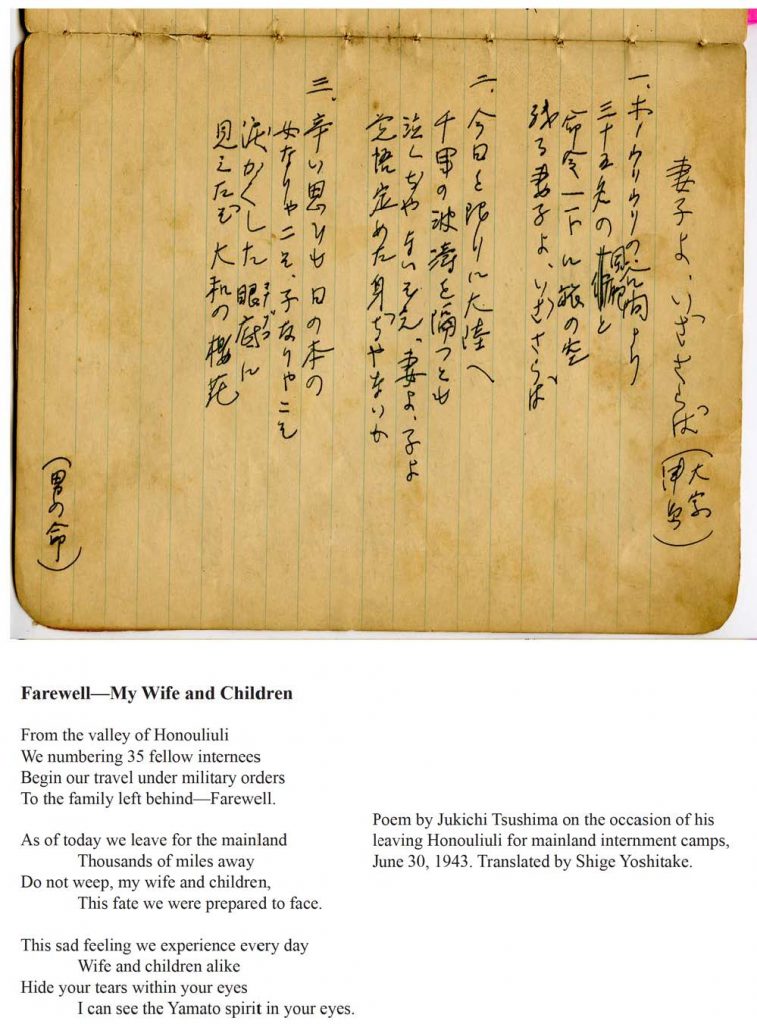