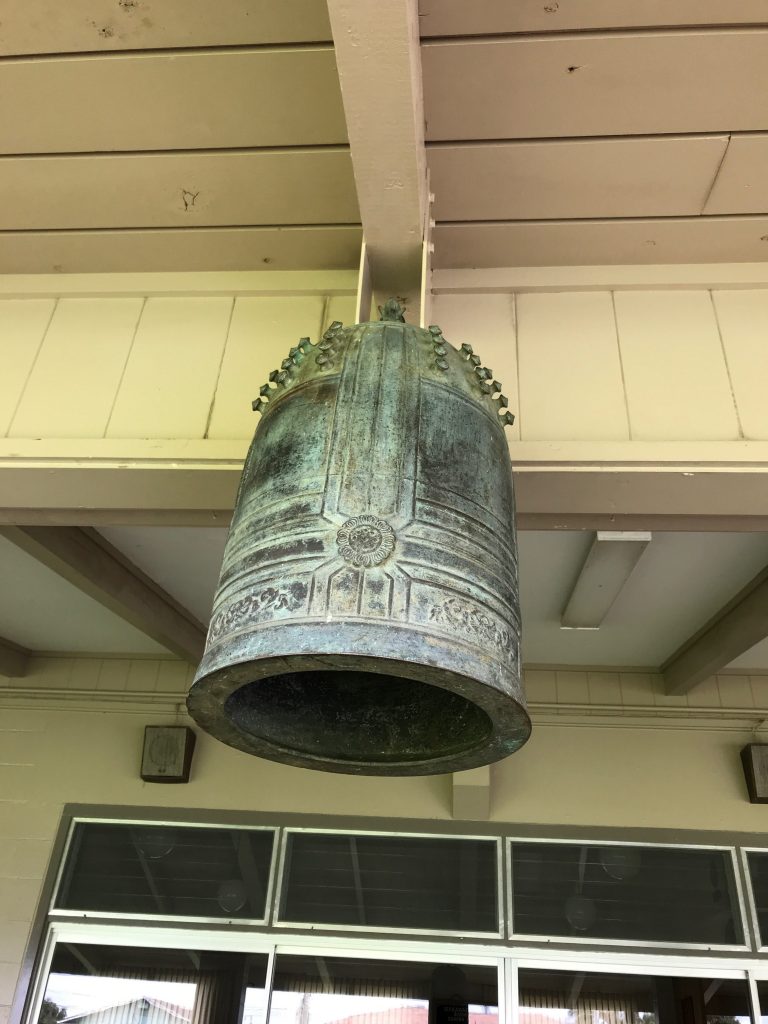 After more than 30 years of silence, a temple bell cast in Japan in the 1920s sounded once again last month in Upcountry Maui. It was rung in memory of five young men who died tragically nearly a century ago while on a Good Friday weekend hike to the summit of Haleakalä with friends.

As the bell sounded at the special remembrance ceremony on March 4 at the Makawao Hongwanji Mission, the names of the five who died were read out loud: Yoichi Arai, Toshio Higuchi, Kazuyuki Kawauye, Tokuichi Matsumoto and Yoriyoshi Tagawa.

Arai, age 21, was the oldest of the five and a husband and father. Tagawa, 18, worked at the Haiku Fruit and Packing Company. Higuchi and Matsumoto, both 17, were sophomores at the old Maui High School campus in Hämäkuapoko, where Kawauye, the youngest in the group at age 16, was a freshman. All five were the sons of immigrants from the plantation community of Hämäkuapoko in East Maui. They died in the opening days of April 1923.

In the months following their deaths, Hamakuapoko Hongwanji members sought to remember them by special-ordering a temple bell from Japan. Inscribed on the bell were their names in Japanese characters along with the Buddhist names that had been given them. The temple members took up a collection totaling $25. In 1923, that was a huge amount of money.

Also inscribed on the bell were the following words:

“On April 1, 1923 (Taisho 12), the following five men perished on the way to the summit of Mount Haleakala on Maui, Hawaii, U.S.A. With deepest regret, the Hamakuapoko Hongwanji Young Buddhist Association held their memorial service which was also supported by those who came from same prefecture and others from the community. A small temple bell was purchased in memory of these five people in order to remember this tragedy forever.”

After being stored away for more than three decades, the memorial bell now hangs near another bell on the lanai of the Makawao Hongwanji Mission. Inscribed on a bronze plaque secured to a pillar nearby are the names of the five men — a reminder of a loss the small East Maui community bore together.

“I’m glad to see the bell hung where it can be seen and heard after so many years in storage,” said Amy (Tagawa) Blue, whose uncle, Yoriyoshi Tagawa, died in the tragedy. “The bell meant so much to the generation of my father, to help them heal from the tragedy.”

Blue said her late father, Tetsuji “Kelly” Tagawa, never said much about Yoriyoshi, who was four years older than her father. Kelly Tagawa died in 1997 at the age of 89.

Amy Blue learned about the bell’s history and the story behind it when it was found recently in the storeroom of the Makawao temple, along with a Jan. 1, 1991, Hawai‘i Herald feature story by current editor Karleen Chinen about the tragedy and the bell. Plans were made to hang the bell once again.

The discovery of the bell helped Amy Blue to connect personally with the tragedy, the uncle she never knew and to finally understand the loss her father felt, but rarely spoke of.

She remembers visiting the graves of the five young men at the Mantokuji Mission cemetery in lower Pä‘ia with her father. “We used to go during Obon time,” she said. “We didn’t understand much.”

But she understands now, and because she does, she believes “the bell has come home.”

“I was really proud to make it,” Richard said. “I was thinking of (Amy’s) Dad. I know how much (Yoriyoshi) meant to the dad.”

Richard said he thought of his father-in-law as he worked on the mallet. “We used to go with him to the grave at Mantokuji to fix up (the grave).” He recalled helping his father-in-law fix the metal pipe structures above the graves to hang the chochin lanterns. Kelly Tagawa was proud to be able to do that, said Richard.

Amy and Richard are two of only a handful of people who know the story behind the bell, albeit secondhand. Most of the people who were alive at the time of the tragedy have already passed on. Even people whose parents or siblings might have told them about the tragedy are few, and time likely has erased their memories.

One exception is 92-year-old Yoshio Kijima, a former Hämäkuapoko resident and former Makawao Hongwanji Mission president, who the Herald’s Chinen interviewed for her 1991 story. During a recent interview with The Maui News, Kijima recalled his Issei mother’s description of that weekend. “So much rain,” she had said.

Ninety-six years ago, on March 30, 1923, 21 young men and women set out to hike to the summit of Haleakalä from their homes in Hämäkuapoko. In 1990, Kelly Tagawa, then 81, told the Herald that it was the first time anyone in the group had attempted to hike to Haleakalä. In that same piece, Jits Matsubara, who was in the fourth grade in 1923 — and whose older brother was in the group of 21 — noted Haleakalä’s rough terrain then.

“Those days, neva get this kind (crater) road. They go straight up the mountain,” he said.

The Daily Maui News (forerunner of today’s Maui News) reported that the group, equipped with supplies, hiked from Hämäkuapoko to Olinda on March 30, which happened to be Good Friday. After overnighting in Olinda, they started up the trail to Haleakalä the next morning.

The 1991 Hawai‘i Herald story reported that some of hikers apparently got separated. About two miles from the summit, the group encountered thick fog and heavy rains. Sixteen of them decided to turn back and head home.

The Daily Maui News speculated that the five who died may have fallen behind and thought they would catch up by taking a different trail — one usually used to come down the mountain, but is generally regarded as too steep for an ascent.

The paper reported that it appeared the five took that trail and lost their way. It added that some people attributed the men’s death to cold, exposure and exhaustion in the thin air at such a high altitude (Haleakalä is 10,023 feet high). Others speculated that their poor physical condition led to their eventual demise.

When they failed to return home by the afternoon of April 1, they were reported missing.

According to the Herald story, a search party of roughly 75 men from Hämäkuapoko was formed and headed by the sheriff. Hamakuapoko Hongwanji was set up as the command post.

In 1990, Yasunari Hamai, now deceased, told the Herald that he helped with communications. “Everyone kökua (help),” he said. “Every once in a while, I could see the flicker of the searchers’ kerosene lanterns on the mountain.”

Hamai was 16 years old at the time. He said the group had invited him to come with them on the hike, but the family he was staying with in Hä‘iku, the Kawaharadas, said he couldn’t go.

According to the Daily Maui News, searchers found Arai and Tagawa near the summit on April 2. They were unconscious, but alive. The two never regained consciousness and died a short time later.

The bodies of Higuchi, Kawauye and Matsumoto were found the next morning about two miles from the summit, reportedly within a few hundred yards of each other.

Martha (Matsumoto) Mihara’s family lived in Hämäkuapoko at the time. In a 1990 interview with Chinen at her home in Pukalani, Mihara said her father helped with the search. She remembered him mentioning burnt matches that were found near the bodies. The men had apparently tried to warm their bodies by lighting matches.

They had also taken off their socks and wrapped them around their necks, probably hoping they would warm their bodies, Mihara said. “I don’t know whether my father saw it or heard about it from the ones that went up,” she said.

The five men were memorialized in a joint funeral service that was held April 4, 1923, at the Hamakuapoko Hongwanji. It was the biggest funeral that had ever been held in the plantation community. The entire community turned out to mourn the loss of the young men and to support their families, including a few plantation bosses, Hamai recalled. Maui Agricultural Company, owner of the plantation, helped to transport the men’s caskets from the temple to the Mantokuji cemetery, where the five were laid to rest side by side.

Over time, the families of some of the men moved the remains to other cemeteries.

Yoshio Kijima, whose mother remembered the heavy rain, is also linked to the story by the bell.

When the bell arrived from Japan, it was hung at the Hamakuapoko Hongwanji, where the men had been members. In time, the temple was closed. The sugar industry had begun to decline and the smaller plantations were being shuttered. The Hämäkuapoko bell was taken down and stored at the Paia Hongwanji temple in Nashiwa Camp at the Pä‘ia plantation, according to a Makawao Hongwanji newsletter.

The Pä‘ia plantation was the next to close in 1971. The bell was moved again, this time to the new Makawao Hongwanji. With Paia Hongwanji closed, many former members decided to become Makawao members.

But the story doesn’t end there.

In 1973, thieves stole the original Hämäkuapoko bell from the Pauwela Hongwanji. Kijima told The Maui News that members wondered why anyone would steal the bell and what they would do with it.

The Hämäkuapoko bell remained missing for nearly a decade.

And then on Sept. 29, 1982, workers with the state Department of Land and Natural Resources found it while conducting a drug raid. Kijima learned about its discovery from his son-in-law, who worked for DLNR. When Kijima’s son-in-law saw the Japanese writing on the bell, he knew immediately that it was the Hämäkuapoko bell that Makawao Hongwanji had loaned to the Pa‘uwela temple, only to have it stolen.

The bell was returned to Makawao Hongwanji and placed back in storage. And there it remained until member Glenn Coryell came across it recently.

“It was in beautiful condition,” said Coryell. He was moved and inspired when he learned of the bell’s history.

Coryell spoke at the bell’s rededication. He said it was a reminder of how people should come together, just as the Hämäkuapoko community did 95 years ago.

This is an example, said Coryell, of “how we should behave today.”

Melissa Tanji has been a reporter for The Maui News since 2000. The Maui native earned her bachelor’s degree in journalism from the University of Hawai‘i at Mänoa.