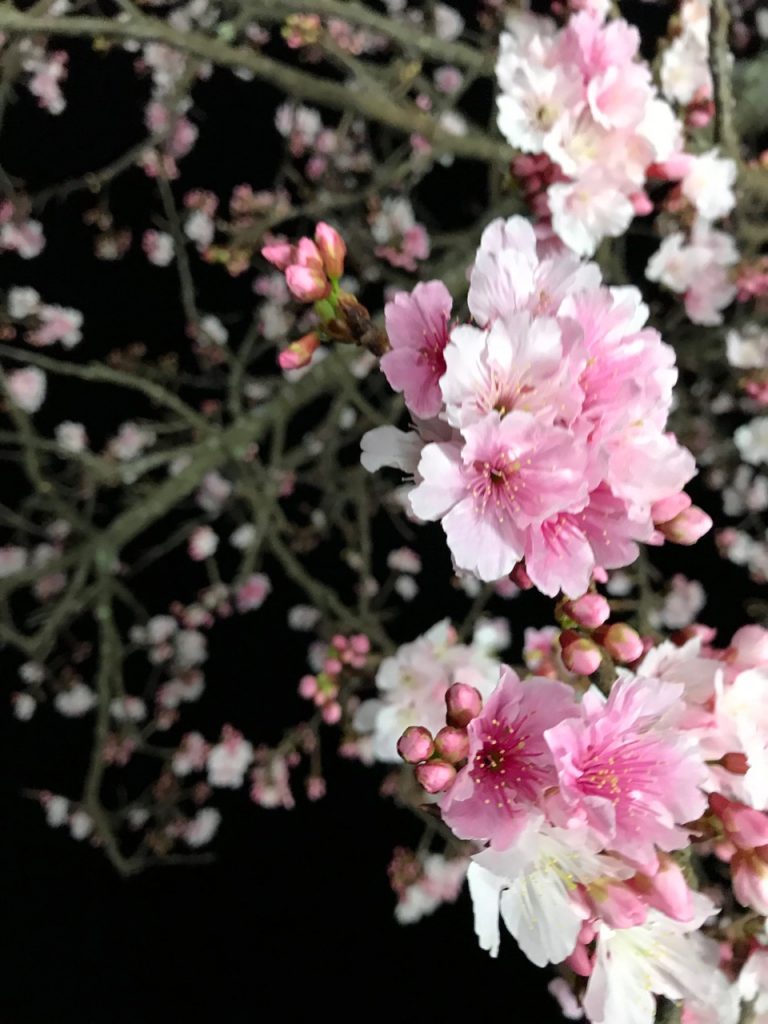 When I think of symbols that represent Japan, three images come to mind: Mt. Fuji and Hello Kitty and sakura cherry blossoms. Fortunately for me, I’m able to enjoy these beautiful flowers in bloom every winter season, even while living in this tropical prefecture. The weather begins warming in Okinawa before it does in other parts of Japan, so the sakura typically bloom here between the end of January and the beginning of February. Most of the blossoms in Okinawa are darker pink in color, which contrasts with the much lighter pink blossoms found in mainland Japan. They actually look pure white from a distance.

Sakura in mainland Japan bloom after Okinawa’s, all the way up through April. I was fortunate to see them in bloom during several trips to Tökyö while on Air Force Reserve duty at Headquarters, United States Forces Japan at Yokota Air Base. There were a bunch of trees growing on one side of the headquarters building. I enjoyed seeing both the flowers in bloom and the petals falling gently, like snow, every time I walked in or out of the building throughout the day for several weeks during the season. That brings up another difference between Okinawa sakura and mainland Japan sakura. The petals of the sakura in mainland Japan break off individually. In Okinawa, however, the complete blossom falls to the ground.

The petals falling on people enjoying hanami, or flower viewing, in mainland Japan also reminds me of how the season is celebrated there. Although I’ve never participated in hanami in mainland Japan, I know that thousands of people pack their picnic baskets and coolers with bento and beer and rush to parks where they spread their mats and tarps out on coveted space under a tree and spend most of the day eating and drinking and writing haiku amongst the crowd. Yatai outdoor vendor booths also serve up food, drinks for purchase and sell games for entertainment at these locations.

This contrasts with how hanami is celebrated in Okinawa. I’ve been to sakura-viewing sites in the Nago and Motobu area, including Nago Castle, Nakijin Castle and Mt. Yaedake a few times, but I’ve never seen large crowds sitting on tarps with picnic baskets and coolers under the trees. Most people usually just walk about and enjoy the blossoms, buy food and drinks from the yatai vendors and then leave. I haven’t observed people in Okinawa staying all day, although that is not to say that people here don’t enjoy the beauty of the local sakura.

My first experience with Okinawa’s sakura was during a weekend outing with local Okinawan co-workers from Kadena Air Base in February 1995, just a few months after I arrived on the island. I remember climbing a lot of steps at Nago Castle in order to view the sakura.

Two years later, in January 1997, my mom and brother came for my wedding so I took them to Mt. Yaedake once the wedding-related festivities were over and we had time to tour. Twenty-one years later, I was able to show my brother the same trees he saw back then.

I like viewing sakura on Mt. Yaedake because you can drive your car all the way up to the top and enjoy the sakura trees that line both sides of the road. The area has also been developed over the years, so midway up the road, there’s a flat area with parking. The yatai vendors set up so that people can purchase food and drinks while enjoying the sakura at that level. This time, the vendors were gone by the time I got there, but I did see them in previous visits.

Sakura ice cream is another treat to enjoy during this season. There was another smaller parking lot a bit further up the road. We parked the car and walked around to check out the different trees and flowers there. From the parking lot, I could see Iejima and the Ocean Expo Park in the distance and another variety of flowers in bloom — tsutsuji, or azalea.

As we drove back down, we made one last stop by a resident’s vegetable stand and walked behind it to check out the sakura there. I was able to catch a few shots of a butterfly and a mejiro bird, who also were enjoying hanami from within the flower clusters.

If you ever visit Okinawa around January/February, various shades of sakura will be waiting for you up north in Hokubu.

After visiting Nakijin Castle in the afternoon to view the sakura blossoms, my brother Kelvin wanted to go back at night to get a different perspective with the trees illuminated. His wife Dana and our other visiting friends were pretty tired out from our long days of touring, so Kelvin and I headed back out by ourselves after sunset from our hotel in Motobu. There was plenty of parking in the nearby lots, unlike a few years ago when I took the family up there and had to park way down the hill and walk back up to the information center.

The castle was closing at 9 p.m. and we had arrived around 7:30 p.m., so we bought admission tickets again for ¥400 each and immediately headed to the entrance to climb the same set of steps we had walked up just a few hours ago. After we crossed the street, we saw the yellow, green and blue hues lighting up the outside of the castle walls. When I visited a few years ago, I must have hit the peak visiting dates — there were so many people waiting to enter the castle. The line snaked all the way around to the left side and then curved to the right until it reached the entrance.

We could again take our time making the ascent to enjoy the flowers in bloom since there weren’t large crowds behind us like the last time I visited. I looked for different clusters of sakura where I could take advantage of the lighting from underneath the branch to get close-up shots of the blossoms facing down. Because of the downward orientation of the blossoms, taking photos in the daylight was difficult with the bright sky in the background. It darkened out the subject as I pointed my iPhone upward.

Kelvin and I continued walking in a clockwise direction once we reached the top and again saw the view of the inside of the castle walls, this time lit up with colored lights.

After descending the main steps and returning to the information center, we checked out some of the food booths that were still open. In keeping with the festive spirit, I ordered a curry rice bowl for ¥650, and Kelvin ordered a couple of tacos for ¥600. To celebrate the sakura season, we both ordered a sakura ice cream cone for ¥310 each. How did it taste? Find out for yourself when you schedule your next trip to Okinawa to take in the blooming of the sakura. 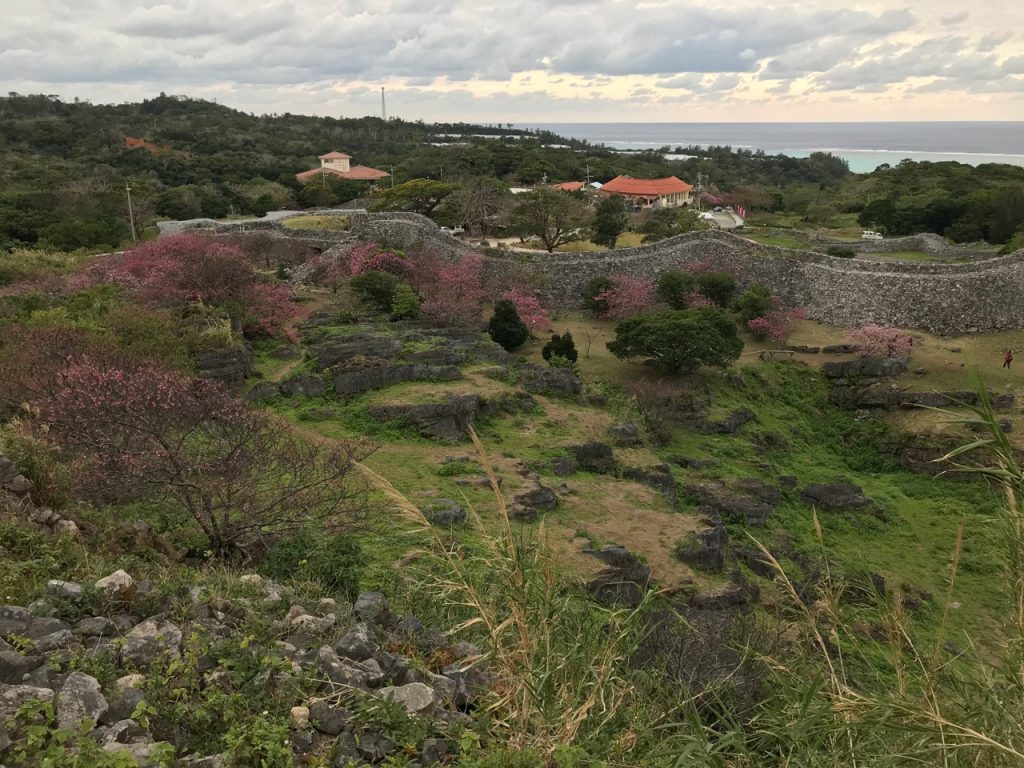