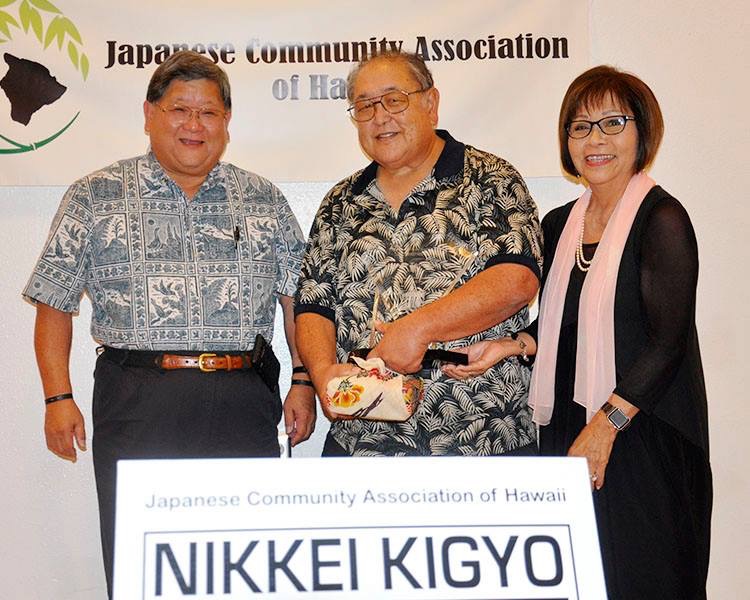 The Kuwaye family’s roots in Hawai‘i Island began with Matsu Kuwaye’s arrival from Okinawa in 1909 to work for Honokaa Sugar Co. After completing his sugar contract, he started his horse-and-buggy Kuwaye Taxi in 1912, later transitioning to automobiles.

Yasuo, the sixth of Matsu and Umito Kuwaye’s nine children, started Kuwaye Trucking when he recognized the need for a hauling service to keep Honoka‘a supplied with goods. He rented a truck and began hauling various goods.

When the 1946 tsunami demolished the railroad system, which serviced communities along the ‘ coast, Kuwaye Trucking expanded its fleet of trucks. In 1950, the company purchased Hawaii Trucking Co. from Theo. H. Davies and moved the business headquarters to Hilo.

More family members got involved in the business. Over the years, Kuwaye Trucking has hauled everything from telescope parts to the summit of Maunakea, to construction materials and has even transported circus animals.

Yasu’s son Wayne assumed the leadership of the company after his father’s passing and perpetuates his legacy of community involvement in addition to running the company.

“My father was an amazing guy. He did a lot for other people and the community,” Wayne said. “Even when I became an adult, he expected me to get involved in giving back to the community. He didn’t lecture, but examples were set.”

S. Tokunaga Store was established in 1920 by Sumie Tokunaga, who immigrated to Hawai‘i Island to work on the sugar plantations. At the age of 31, he opened a grocery and tackle shop in downtown Hilo. When the tsunamis of 1946 and 1960 destroyed the stores, the Tokunagas persevered and rebuilt the business, which is now located on Manono Street.

Sumie’s daughter-in-law Ethel took over the business in 1960 and decided to focus on fishing and diving supplies only. Sumie’s Sansei grandson, Michael and his wife, Peggy, succeeded Ethel in running the business. They had already been involved in the business for many years.

Under Michael’s and Peggy’s leadership, S. Tokunaga moved to a bigger location, which enabled them to expand not just their selection of merchandise, but also their sales reach.

In 2013, Michael and Peggy took on a major expansion, moving to their current location on Manono Street. With a bigger staff and more space, the store’s focus has expanded to not just the ocean, but outdoor activities in general. Even at that, S. Tokunaga Store remains committed to those who love to fish. It is one of the few places where you can still find traditional Japanese fishing tabi.

The Tokunagas promote family fishing outings, such as the Ulua Challenge, the largest shoreline casting catch-and-release tournament in the state. Tokunaga Store also teaches fishermen how to use barbless hooks and works with Hilo area schools to teach students about sustainable fishing.