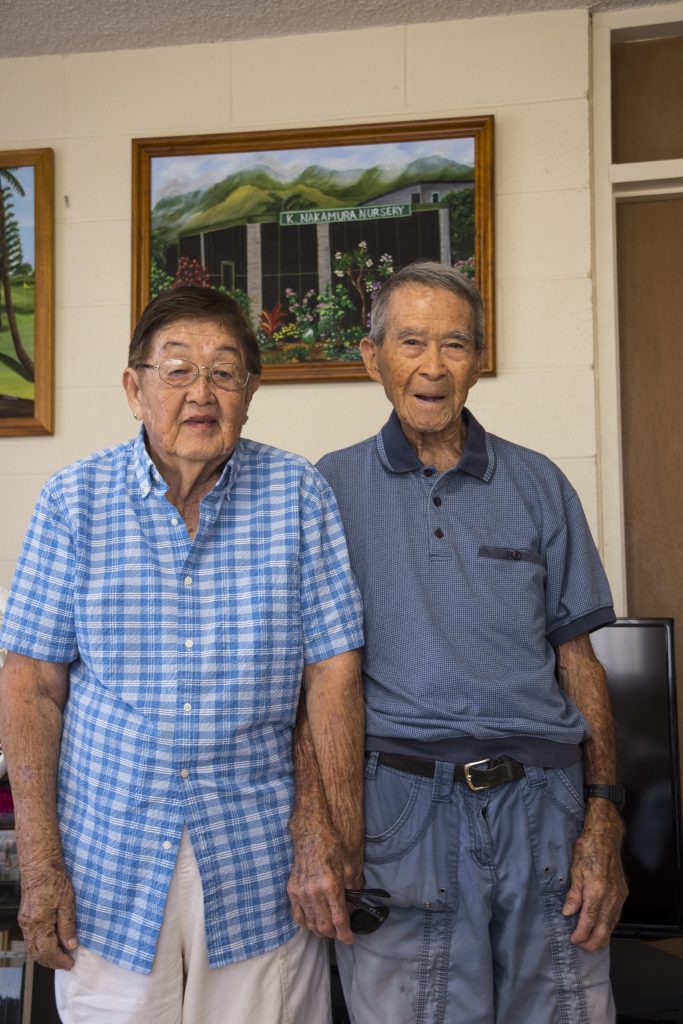 An Oasis of Plants and Trees in Kapahulu

Nestled among the high-rise apartment buildings and older homes along Date Street in Kapahulu sits a quarter-acre oasis of flowering plants and small fruit trees that Helen and Masayoshi Nakamura have been tending to for more than half a century. Once a banana patch, K. Nakamura Nursery has thrived for decades as an off the beaten path place to find plants and fruit trees to add to your home garden.

Although the business has neither a website nor an email address, it is the subject of dozens of postings on social media. One Yelp contributor called it “a jewel in the city.”

A 2016 posting from Arizona said: “Mrs. Nakamura was amazing, from greeting us with delicious mandarins to helping us pick out the right plants for our space. She even encouraged us to consider less expensive options. This place is a gem.”

Another Yelp endorsement from 2012 said: “This is the place everyone has been hoping for; small business, family owned and operated — I think it is only mama and papa — he waters, she assists the clients. Total down to earth Japanese style nursery. Mama-san will give you recommendations of “good” or “no good” with your choices if you give her the details of your plan. Eclectic selection and awesome variety. If you accept her suggestions, she always throws in a few potted plants for free.”

The “K.” in the name of the business comes from Kanichiro Nakamura, who immigrated to Hawai‘i from Hiroshima, said his granddaughter, Charleen Nakamura-Leong. Her father, Masayoshi — Kanichiro’s second son — operates the nursery with his wife Helen, Charleen’s mother.

In the 1930s, prior to starting the nursery, Kanichiro owned and operated Waialae Store, which was located mauka (mountainside) of today’s Kahala Mall, said Nakamura-Leong. He later obtained his broker’s license and helped others lease land in the Kapahulu area. Kanichiro himself leased and cleared a 17,000-square foot banana patch on Date Street, which he later purchased from the I‘aukea Estate.

Rice paddies and taro and banana patches once dotted the area where Kaimukï High School now stands, and golfers now tee up at the Ala Wai Golf Course, once the site of rice paddies and the Territorial Fair Grounds. Several small streams and a freshwater well kept the area irrigated before emptying into the Ala Wai Canal, where Lukepane Street is today. At certain spots along Waikiki Beach, water can be seen bubbling to the surface.

“My grandfather started growing roses, asters — a popular flower used in floral arrangements — and other cut flowers. He also built a home on the Date Street property,” said Nakamura-Leong.

Kanichiro and Misao Nakamura’s six children — sons Yoshinari, Masayoshi, Takeo and Francis, and daughters Dorothy and Irene — helped their parents tend to the flowers. In later years, their spouses would also help with the family nursery.

Kanichiro Nakamura’s entrepreneurial legacy lives on today in Masayoshi — “Masa” to most — a Nisei veteran of the 442nd Regimental Combat Team, and his wife Helen.

Helen Nakamura began working with her father-in-law at another nursery in Wailupe, near the old Nii Nursery and chicken farm. The elder Nakamura leased and operated that nursery until losing the lease when Bishop Estate began developing the area.

“We grew hibiscus and other kinds of flowers for two years,” said Helen, who is now 86.

Helen and Masa took over the Date Street operation nearly 60 years ago when his father moved to Mänoa. He died in 1990 at the age of 90.

Now 96, Masa recalled that his father would scour Mänoa Valley for plants to sell. “He was a good businessman. He was honest. He would help other people who needed help trying to get a lease. He would dress in a white shirt and put on his cufflinks and a tie to meet businesses to help his friends get loans.”

After graduating from McKinley High School in 1939, Masa started working at a private plumbing company. When plumbing supplies ran low in 1942 due to the war, Nakamura went to work for the Honolulu Board of Water Supply, where he was considered an essential wartime worker and exempt from serving.

But when the call went out for volunteers for the all-Japanese American 442nd Regimental Combat Team, Masa decided to step forward to serve. “Since everyone was volunteering, I thought it was the proper thing to do,” he said. His older brother, Yoshinari, was already in service after having been drafted into the 100th Infantry Battalion. Two younger brothers, Takeo and Francis also served in the Army after the war.

Had Masa taken advantage of his exemption, he would not have been in the thick forests of the Vosges Mountains in northeastern France in October of 1944 when the 442nd was ordered to liberate the French towns of Bruyeres, Biffontaine and Belmont. Neither would he have been involved in the hard-fought six-day effort to rescue 211 Texas National Guard soldiers who were trapped in the Vosges, surrounded by German soldiers. The 100th Battalion/442nd RCT lost 161 men who were killed in action and over 900 who were wounded in battle. Masa, who was in I Company, 3rd Battalion, was wounded in the “Lost Battalion” rescue. The injury earned him the first of three Purple Heart medals he received during the war.

Masa was in the spotlight last October at a Hawaii Theatre preview screening of Stacey Hayashi’s film on the Nisei warriors of World War II, “Go For Broke: A 442 Origins Story.” Adm. Harry B. Harris, commander of U.S. forces in the Pacific, singled out Masa Nakamura, who, just weeks earlier, had been presented the Legion of Honor medal, France’s highest civilian award, for his contributions to liberating the French people more than 70 years ago. In his remarks, Harris, who is currently the highest ranking officer of Japanese ancestry in the U.S. military, praised not only Nakamura, but all of the Japanese American soldiers, as well, who served and sacrificed their lives in World War II.

“Everyone who battled in that war suffered, but the Nisei warriors had to struggle with additional challenges — like discrimination, distrust and outright hostility — from the same country they were fighting to defend,” said Harris.

“The Nisei warriors are all heroes in my book,” Harris added. “They’re heroes in any book. So I’m honored to participate in this tribute to our Japanese American World War II veterans, and in one particular: Masa Nakamura.”

Harris said it is “no exaggeration to say that I stand on the shoulders of giants. For me to be a Japanese American four-star admiral in command of all joint forces across the Indo-Asia-Pacific, well, it’s because of these Nisei trailblazers,” Harris said, including also the 300 Nisei women who joined the Women’s Army Corps.

Harris noted that the “Lost Battalion” rescue is considered one of the greatest land battles of World War II. “For those who survived this epic battle, like Masa, I know it’s still painful to discuss,” Harris said. “But this is vital history — history that must be remembered and recognized.”

After being discharged from the Army, Masa returned to his job at the Honolulu Board of Water Supply, where he worked until 1960 when he transferred to the city’s Wastewater Department. Daughter Charleen Nakamura-Leong said that after work, her father would put in a few more hours, working with her mom at the nursery, thus enabling them to keep it open seven days a week.

“I love to wait on customers,” she added.

That’s good news for plant lovers, since Masa and Helen Nakamura have no plans to retire any time soon.

Gregg K. Kakesako worked for the Honolulu Star-Bulletin, Gannett News Service and the Honolulu Star-Advertiser for more than four decades as a government, political and military affairs reporter and assistant city editor. 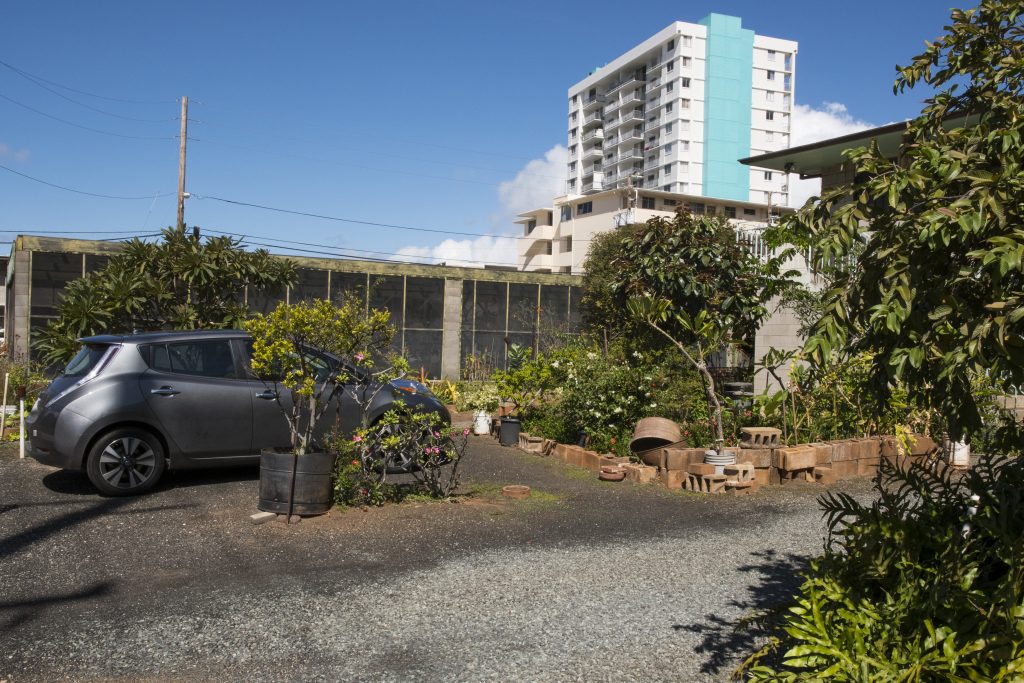