Camp. That one-syllable Pandora’s box stuffed with the tangled legacies of our families’ World War II incarceration is, whether we like it or not, an inheritance that connects almost all Mainland Sansei. It’s a deeper tie than sweating together in Nikkei basketball leagues, or savoring smoky teriyaki chicken at obon festivals and church bazaars.

Most of us know the camps in which the government imprisoned our families. Mine claimed Manzanar, Jerome and Gila River. Many of us heard our parents’ stories of suffering through violent dust storms, standing in long lines for substandard food, or perhaps gentler accounts of camp baseball leagues and social hall dances. 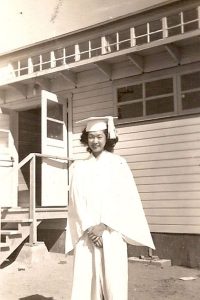 Three years ago, I participated in the annual pilgrimage to Tule Lake, the camp that ultimately became the official “segregation center” for Nikkei that the government considered “disloyal” or “troublemakers.” Camp survivors — now in their 80s and 90s — recounted police officers beating prisoners with baseball bats in the Tule Lake jail, and Nikkei clutching coffee cans filled with the cremated remains of relatives as they left the desert camp to face a hostile postwar America.

At the pilgrimage, I realized that during World War II, my grandparents were about the same age I am now. Viewing the camp years through a new lens, I imagined what it must have been like for my middle-aged grandparents to leave camp — with dependent children, no home or job to reclaim, and no savings.

When they should have been envisioning retirement, many of our grandparents were having to start over. I wondered if I could muster their grit or emulate their resilience, enduring “Jap” spit at them and doors slammed to homes and jobs.

Like our grandparents, our Nisei parents endured hardships. They were determined to provide us middle-class, postwar comforts with a Nikkei twist — piano lessons and karate classes, road trips to national parks and afterschool Nihongo gakko (Japanese language school). They gave us opportunities to channel our over-achieving tendencies, which have translated for many Sansei into professional and economic success.

My grandparents and parents passed away decades ago, before I fully appreciated their sacrifices and fortitude. I never had the opportunity to thank them for their legacies. But it’s not too late for Sansei and subsequent generations to pay forward those legacies.

Brian Niiya, in an earlier essay in this series, lauded Sansei activists, writers and filmmakers who have educated the world about Japanese Americans’ wartime incarceration. Many were vital to the redress movement. They have been at the vanguard of advocacy to ensure that other groups do not suffer the same injustices that Nikkei endured during World War II.

That activism took on greater meaning after Sept. 11, 2001. In the confusing days immediately following the terrorist attacks, when our country was gripped in fear and anger, I thought, “This must have been what it was like after Japan bombed Pearl Harbor.” Now, though, Muslim, Middle Eastern, and South Asian immigrants and citizens were the pariahs — beaten, screamed at to “go back where you came from,” and forced to register with the government.

A few days after 9/11, I participated in a twilight vigil organized by a multigenerational group of Nikkei in San Francisco’s Japantown to support Muslim Americans. We recognized that Muslims were in the crosshairs because they shared the same religion with the terrorists who had attacked our country, just as Japanese Americans were targeted decades earlier because they looked like the enemy.

As terrorist attacks erupt across the globe with disturbing regularity, though, sympathy for Muslims among individual Japanese Americans may be wavering.

Last year, I attended an event at the Japanese American National Museum in Los Angeles to honor Minoru “Min” Yasui, a Nisei who challenged the government’s curfew orders on Japanese Americans during World War II. His case reached the U.S. Supreme Court, which ruled against him. More than 70 years later, President Obama posthumously awarded Yasui the Presidential Medal of Freedom, our nation’s highest civilian honor. One of Yasui’s daughters spoke at the event, as did former U.S. Rep. and presidential cabinet member Norman Mineta, Department of Justice official Ron Wakabayashi and Dr. Irum Siekh, a Muslim scholar.

During the question-and-answer period, an agitated Sansei man asked, “Tell me, why do Muslims hate us?”

However confrontational the mode of the man’s question, it was a variation of comments I’ve heard from other Sansei: “Muslims are different.” Or, “Japanese Americans never attacked the U.S. like Muslims.”

These statements are disheartening. They reflect the underlying assumption that resulted in our families being incarcerated: All members of a group — in this case, millions of Muslims — are potentially guilty because of a shared trait.

During World War II, most Americans did not distinguish between the Japanese enemy and Japanese Americans. A handful, though, made the distinction. They rejected false stories about Nikkei disloyalty because they knew that their Japanese American friends and neighbors were not the enemy.

Whether members of groups like the Quakers or simply decent individuals, they stood up when it counted. Some protested the imprisonment of Japanese Americans. Others tended farms or stored furniture while our beleaguered families were in camp.

These men and women of conscience withstood threats and scorn as “Jap lovers” because supporting their friends was the just thing to do. They accepted the spiritual baton from others before them — white abolitionists fighting to end slavery, men voting for women’s suffrage — who participated in the unending moral relay race that each generation must run.

As our Nisei parents pass away, we are losing direct connections to the lived experience of wartime incarceration. But given our families’ histories, we Sansei have a unique value-added voice to contribute to debates about refugee bans and Muslim registries. Our legacy can be to speak up for justice and the principle that individuals should not be presumed guilty simply because of their race or religion.

We can pay forward the legacies of our parents and grandparents. It’s our turn to take the baton.