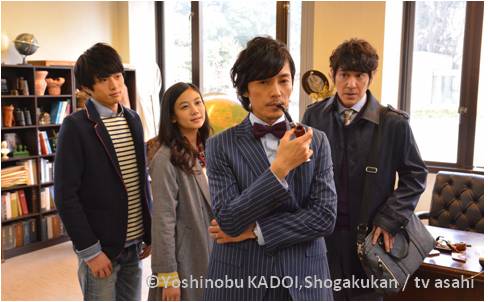 Channel 9 (Spectrum) and 20 (Hawaiian Telcom) Programs are subject to change, without notice. For updated information, call 847-2021)

Homicide Team 9, which is composed by the few elites, is the most unusual team in criminal investigation divisions of the Metropolitan Police Department. They are always at the top of the criminal arrest rate. They try to solve criminal cases with struggling and cooperating each other.

KIKU-TV brings you the best in murder, mystery and intrigue every Wednesday night, driving this program’s popularity and growth. Episode titles are hand picked from both Tokyo Broadcasting System (TBS) and TV Asahi.

Dec. 13: “Professor Eiko.” The body of a professor is discovered at a university lecture hall suspended from the ceiling of the stage, with a series of mysterious numbers written on the curtains nearby.

Professor Eiko, a law professor at the university well versed in criminology, is asked to assist police in the investigation, and he uncovers clues that point to him as a suspect.

Why is he being set up? As he and his assistant work to decipher the code left on the curtains, another professor at the university is murdered. And yet another mysterious code is left at the scene of the crime.

Dec. 20: “Gold Woman.” Tamaki Yoshizawa is an up-and-coming female executive of Teito Bank tasked with restructuring an underperforming division, which will result in layoffs and the forced retirement of many long-time employees. In the process of carrying out her unpleasant responsibility, Tamaki learns she was set up by her immediate supervisor, Mai Yajima, to carry out the dirty work.  In an environment where women have difficulty enough succeeding in a man’s world, is there any camaraderie amongst women?

Dec. 27; “Kuroha.” The bodies of 14 men and women are found frozen to death in containers in the harbor district of Kanagawa. Detective Kuroha is the first person to make the discovery, and is assigned to the task force investigating the crime. A suicide note is found at the scene, leading the task force to believe it was a mass suicide. But Detective Kuroha has a different hypothesis. She believes there was a 15th person . . . someone who has not committed suicide yet.

Nick and Vanessa are engaged to be married, but tragedy strikes when Nick is in a helicopter crash that causes him to lose his memory.

The authorities, unable to find Nick, declare him dead, leaving Vanessa in a deep depression.

Nick resurfaces, but with no recollection of Vanessa or his past life, introduces himself as Darwin. As Darwin, he meets and falls in love with a beautiful artist named Jessa. They marry and have a son.

But faith intervenes again as Darwin in involved in another accident, which causes him to regain the memory of his life as Nick and forget his new life as Darwin.

Who has the right to a future with Nick now? His first love Vanessa? Or the family he created with Jessa and their son?

Horizon is a mail order company with more than 100 million items in their catalogue. Horizon’s staff has no problem fulfilling their customers’ every desire with the click of a mouse, but when it comes to fulfilling their own happiness, they fall short. Relationships are more difficult to obtain for the young Horizon staff.

Miyabi Tachibana is 39 years old and she hasn’t had a boyfriend in five years. A beautiful and successful doctor, she enjoys her life as a single woman. Miyabi is pretty and confident, but at her school reunion, she finds herself being pitied by others for still being single. After the school reunion, she attends a gourmet meeting at a restaurant. There, she talks about her school reunion. At that time, Seiji, the owner of the restaurant, makes a biting remark that she isn’t the type popular with men. She becomes upset by the remarks and declares, “Get married?  I can get married if I set my heart on it.  I’ll show you!”

Based on the manga of the same name, this drama is about time travel.

A young chef named Ken is mysteriously transported to the Sengoku period and he also loses most of his memories. He is thrown in the midst of a battle between soldiers, and, as both sides think he is a spy, they hunt him down. During his escape, Ken meets Natsu, a young blacksmith girl. Because of his cooking abilities, Ken is soon recruited as personal chef of Oda Nobunaga.

A touching drama based on a true story about Koichi Hikuma, a former musician who walked away from the world of music after being involved in an accident.

One day, Koichi is approached and asked to become the advisor of a small brass band at a run down high school. The band includes a group of unruly students who reject authority and who have forgotten what it’s like to have dreams.

Using the universal language of music, Koichi reaches out to the students, and tries to teach them about never giving up and the wonder of once again having dreams.

During the Sengoku period, the Ii family governs the Totomi region. Due to many past wars, there are no more male successors left to become a lord. Naotora Ii, the only daughter of the lord, is next in line. Although she will face a difficult period, the constant love from her fiancé, whom she became engaged with at a young age, helps her to keep moving forward.

The twelfth season of this popular detective series.

Detective, Ukyo Sugishita, has great insight and cunning skills. His partner, Toru Kai, is strong-minded and rough. And he is excellent in the powers of observation. Together they solve many mysterious crimes.

Which dish??? Hiroshi Sekiguchi and Yuji Miyake hosts an exciting cooking contest between expert chefs, cooking two popular dishes using the best ingredients possible. When the chefs have completed their dishes, a celebrity panel is presented with a choice of which dish they wish to eat. The choice that receives the majority of the votes, “wins” and the panelists get to eat that dish.

Lara and Sara were conjoined twins who, after being separated, are adopted by two different aunts. Aunty Betty takes Lara, so her mean daughter Vanessa will have a playmate. But living in their cruel household forces Lara to run away, and she eventually finds a kind Samaritan who takes her in. Meanwhile, Sara is adopted by another aunt, whose abusive husband disfigures her face. After plastic surgery to restore her face, Sara realizes the surgeon has made her look exactly like her cousin Vanessa. Only then does she learn that the surgeon and Vanessa are lovers, and the surgery was a plot to create Vanessa’s body double, freeing the couple to travel abroad and spend money stolen from Vanessa’s husband.

A heart-rending story of a mother who struggles to keep her children from being taken away from her.

After a whirlwind romance, Amelia ends up marrying Mario. They are rich in love but don’t have much money, so to help make ends meet, they live with Mario’s stepmother, who is cruel to Amelia.

To support his family, Mario moves to the city for a job. There, he meets a wealthy heiress named Veronica. Veronica falls in love with Mario and, with the help of Mario’s stepmother, destroys the once happy family.

Amelia’s life becomes a living hell as one by one, her children are taken away from her. Will she have the courage and strength to rebuild her life?

A culinary student’s one-sided love for his once high school sweetheart is a story of bittersweet unrequited love that will surely melt your heart.  His love for her and her love for chocolate lead him on a quest to creating the perfect chocolate in order to capture her heart.

Homicide Team 9, which is composed by the few elites, is the most unusual team in criminal investigation divisions of the Metropolitan Police Department. They are always at the top of the criminal arrest rate. They try to solve criminal cases with struggling and cooperating each other.