I sampled the cuisine of Chef Ed Kenney for the first time about 12 years ago, just after he had opened his first restaurant, Town, at Wai‘alae and 9th avenues in the heart of Kaimukï. The occasion was a wine dinner for about a dozen diners. Chef Kenney had graciously allowed us to bring in our own bottles of wine.

I first sampled his platter of mixed and unique frites, the French word for batter-coated fried items at that event. However, unlike the usual calamari fare, Chef’s frite platter featured fried long beans, thinly sliced cauliflower and lemon — the lemon with the peel. The acidity of the lemon, along with the slight bitterness of the pith, cut through the fried batter and refreshed my palate between bites. It’s one of my favorite food memories.

Fast forward to this past Oct. 5, when we again had a chance to sample Chef Kenney’s unique local cuisine at the annual Good Table fundraiser, a benefit for Lanakila Meals on Wheels.

If you frequented Waikïkï in the 1960s and 1970s, you may have seen Chef Kenney’s parents — the late Ed Kenney Jr. and Beverly Noa, who passed just about a week ago — performing at either the Royal Hawaiian Hotel or the Halekulani. Thankfully, Chef Kenney took a different path in his life. 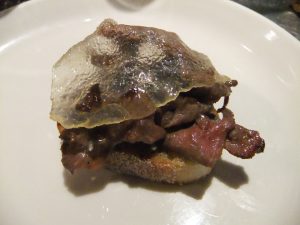 His formal training began at the University of Hawai‘i Community College System’s Culinary Institute of the Pacific and took off with his opening of Town in 2005, then Kaimuki Superette in 2014, Mud Hen Water in 2015, and Mahina & Sun’s in Waikïkï just last year. Chef Kenney recently kicked off the second season of hosting PBS’ colorful “Family Ingredients” series celebrating the cultural roots and stories behind Hawai‘i’s food culture.

Long after chefs Alan Wong and Roy Yamaguchi made Hawai‘i Regional Cuisine a household term, but well before the latest generation of local chefs such as Andrew Le, Chris Kajioka and Mark Noguchi made their mark on the 50th’s culinary scene, Chef Kenney was already at work, quietly forging his own identity, beginning with Town. His mantra, “Local first, organic whenever possible, with Aloha always,” emphasizes not just a commitment to purchase local products, be it Ma‘o Farms produce, Pono Pork or Kualoa Ranch oysters, but a commitment to highlighting traditional ingredients not usually seen on restaurant menus, such as pa‘i‘ai (freshly pounded taro root) and ‘ulu (breadfruit). Kenney is also the only chef in the 50th who follows the recommendations of the Monterey Aquarium’s Seafood Watch Program, which emphasizes the use of sustainable and safe seafood. He’s one of only a handful of chefs who cures his own charcuterie.

I thoroughly enjoy the “on the menu” items at Town. But one of my most memorable meals there was a Whole Hog dinner that Chef Kenney created as a fundraiser auction item for the local culinary programs. It featured traditional pork dishes like sausages and pork belly, but it also included panko-coated and fried trotter (pork feet) cakes, pasta made with pork’s blood, and grilled pork heart and lardo (cured pork back fat) crostini. Dinner concluded with a whole roasted pig head that diners shredded for pig head tacos — a luscious blend of crispy skin and succulent, gelatinous meat! That dinner was about six years ago. I can close my eyes and still smell and taste every single dish in my mind.

Two years ago, I attended another special dinner — again created by Chef Kenney, but this time using products considered invasive pests in Hawai‘i. This “Invasive Species Dinner” featured gorilla ogo — a fatter, faster-growing edible seaweed variety that tends to overwhelm any other variety. It was just as delicious as the thinner ogo used for poke and namasu (Japanese vinegared vegetable salad). The meal also featured wild boar — I’m sure you’ve seen these hairy, black ruffians on the side of the road that contribute to avian malaria; and ta‘ape (blueline snapper), which inhabit all of Hawai‘i’s reefs and mangrove wood. No, we didn’t consume the wood, but Chef Kinney used slices of mangrove as a base for cooking opah (moonfish) the way cedar planks are traditionally used to cook salmon.

Mud Hen Water is the literal translation of the street fronting the restaurant — Wai’alae Avenue. Wai’alae breaks down to “wai,” or fresh water, and “‘alae,” the endangered mud hen, which is believed to have populated the area before Kaimukï was developed. Mud Hen Water is located kitty corner to Town, and right next door to Kaimuki Superette, giving Chef Kenney three restaurants within a one-block area.

The vibe at Mud Hen Water is a little more casual, although Town isn’t at all stuffy or formal. Its menu, however, seems to highlight more local products and new interpretations of ethnic classics, like Pig Face and Kim Chi Omelette, which is Mud Hen Water’s take on the classic Filipino sisig — chopped, fried and spiced pork head and belly. Yaki o Pa‘i‘ai is Town’s take on grilled mochi (steamed ricecake) served with shoyu, sugar and nori (seaweed), using freshly pounded taro in place of the mochi.

The restaurant’s Cold Ginger Rabbit Terrine is a twist on the classic Chinese cold ginger chicken, substituting locally raised rabbit for the chicken.

I’m not much of a dessert person, but I’ve already “borrowed” Town’s Miso-Butterscotch Rice Pudding, creating my own chocolate natto rice pudding with natto caramel sauce for the annual Natto Day dinners. I credit Chef Kenney for the inspiration.

The radish was a single bite that perked the palate with the pickled carrot contrasted with the toasted sesame seeds. One of my favorites since we first dined at Mud Hen Water has been the beet poke with roasted beets, smoked macadamia nuts, ogo and sesame oil on mashed avocado. The yaki o ‘ulu grilled breadfruit was a substitution for the grilled pa‘i‘ai (hard, pounded, undiluted taro) on the usual menu.

This soup was a milder version of hot and sour soup. The broth was rich, but not salty. It had just enough heat to tickle the back of my throat, as opposed to hot and sour soup, which burns my mouth. Two fellow diners had shellfish allergies, so our server ran across the street for two bowls of soup that were being served at Town so that they wouldn’t miss the soup course.

The burnt bread sauce served over the carrots was like the traditional Sauce Romesco in Spain using old bread, toasted almonds and rehydrated red peppers. It would have been my favorite side dish, but the buttered breadfruit with black bean, sour orange and cilantro was hearty enough to almost be a vegetarian main course. Blanched fiddlehead ferns, or pohole — also known as warabi — are also always good.

These clafoutis were almost like pancakes, like Dutch babies with flecks of guava that paired perfectly with its local fruit partner, coconut.

This was yet another spectacular meal created by Chef Ed Kenney and his staff. Although these meals were created as fundraisers for worthy local charities, they gave us an opportunity to sample the regular menu items at both Town and Mud Hen Water — and they are just as spectacular!