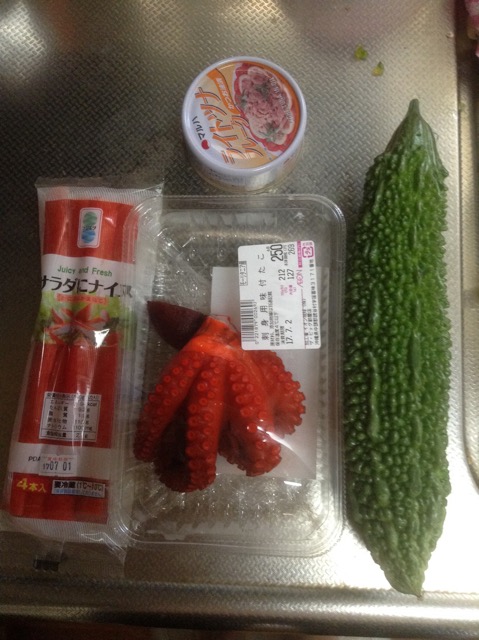 During Yasuko’s visit earlier this year, we picked her up from Naha Airport and stopped at Takayesu Soba in Urasoe for a bite to eat on the way to their oldest brother’s house in Awase. I was finally able to introduce Keiko to owner Fukue Takayesu, who came out from the back to talk with us once things had settled down.

I met Fukue-san last year when Okinawa-Hawaii Kyoukai (association) president Choko Takayama asked me to help her find the graves and Hawai‘i relatives of her late husband’s family. In September of last year, she and her two younger sisters made arrangements to come to Hawai‘i. They planned a day trip to Hilo to hakamairi (grave visitation), even if they didn’t know the location of the ohaka (grave) or whether any relatives were still alive.

A black-and-white photograph of two family members’ ohaka, with Hilo Bay in the background, seemed to suggest that the location was ‘Alae Cemetery, just north of Hilo. With their departure less than a week away, I quickly emailed everyone on my blast list, as well as my Hilo relatives, to see if anyone could assist with any information.

Less than four hours later, my Sewake cousin drove out to ‘Alae Cemetery and confirmed that the ohaka were indeed located there. A short time later, my UH dorm friend and Hilo resident, Robert Kaneshiro, confirmed that the Takayesu ohaka were located right next to his Kaneshiro family’s gravesite — he had just come back from ohakamairi. Imagine that!

Within a few days, the trip plans for Fukue-san and her sisters went from zero information to identifying the ohaka location and tracking down a Takayesu relative who happened to live one street away from Robert, arrangements for the sisters’ pick-up at Hilo Airport, flower shopping and transportation to the cemetery, followed by lunch and conversation about Okinawa at Robert’s house with their newfound Takayesu relative.

You might recall that Takayesu Soba was one of the three soba restaurants featured in last season’s Hawai‘i-made PBS series, “Family Ingredients,” hosted by local chef/restaurateur Ed Kenney. Wahiawä native Dan Nakasone was one of the producers of the series. He and his crew had gotten to know Fukue-san when they filmed her at her soba shop, Takayesu Soba, in 2015.

Dan picked up the three sisters from their Waikïkï hotel and took them to meet Hawaii United Okinawa Association executive director Jane Serikaku at the Hawaii Okinawa Center the day before they left for Hilo.

Takayesu Soba is open Monday to Saturday, from 10 a.m. to 8 p.m., and is closed on Sundays. I recommend stopping there for a meal when you’re visiting Okinawa. They have an ‘ono menu, especially their famous yushidoufu (soft tofu) soba (not pictured). More than that, though, it’s a success story about Hawai’i and Okinawa Uchinanchus working together to maintain strong kizuna bonds.

Some Hawai‘i friends have been asking me for Keiko’s recipe for göya (bitter melon) salad, so with her permission, I’m sharing it with all of you. Confession: I only know how to cook two things: rice and instant ramen, so if you have any comments or questions regarding this recipe, send them to Herald editor Karleen Chinen and she will forward them to me so I can get the answers from Keiko.

She made a batch while my Hawai’i friend and I were watching the professional baseball game between the Seibu Lions and the Lotte Marines at Okinawa’s Naha Cellular Stadium, which was being televised live. As we watched the game, Keiko whipped up her göya salad. She even took pictures throughout the process. Here are the ingredients.

According to Keiko, selecting the “right” göya is important. For this salad, she said it’s best to pick one that has larger/longer bumps on the outside skin and that is lighter green in color. The darker green göya tends to be more bitter. My Yomitan friend, Masaji Matsuda, had given me two göya, so Keiko used one to cook chanpuru (stir-fry) and the other one for the salad. She said she would have chosen a different one had she bought it herself at the grocery store.

Keiko said it’s important to cut the göya into very thin slices. After slicing them, she squeezed them lightly and rinsed them in a bowl of water four times. It’s hard to tell from the pictures she took, but it’s like washing rice: You want the green color to come out, and at the end of the washing and rinsing, there’s just clear water. She then put the bowl in the refrigerator and let the göya soak in the water for about a half-hour. She said this helps to cut the göya’s bitterness.

In the meantime, she chopped up the tako and shredded the imitation crab. After letting the göya soak in water for a half-hour, she drained the water and then began adding the other ingredients to the göya — the tako and imitation crab, the canned tuna, Oriental dressing, lemon juice and pepper — and then mixed them all together. And that’s it! There’s your Göya Salad!

Again, Keiko makes this göya salad all by taste, so I can’t tell you how much of each ingredient to add. Did you notice the cherry tomatoes in her salad? She said she only added the tomatoes because we had some in our refrigerator.

Even though I don’t cook, I recommend that you serve this göya salad in a Ryukyuan glass platter or bowl or some other traditional piece of Okinawan yachimun pottery to make its “Okinawan aji,” or flavor, come out even more. Enjoy!