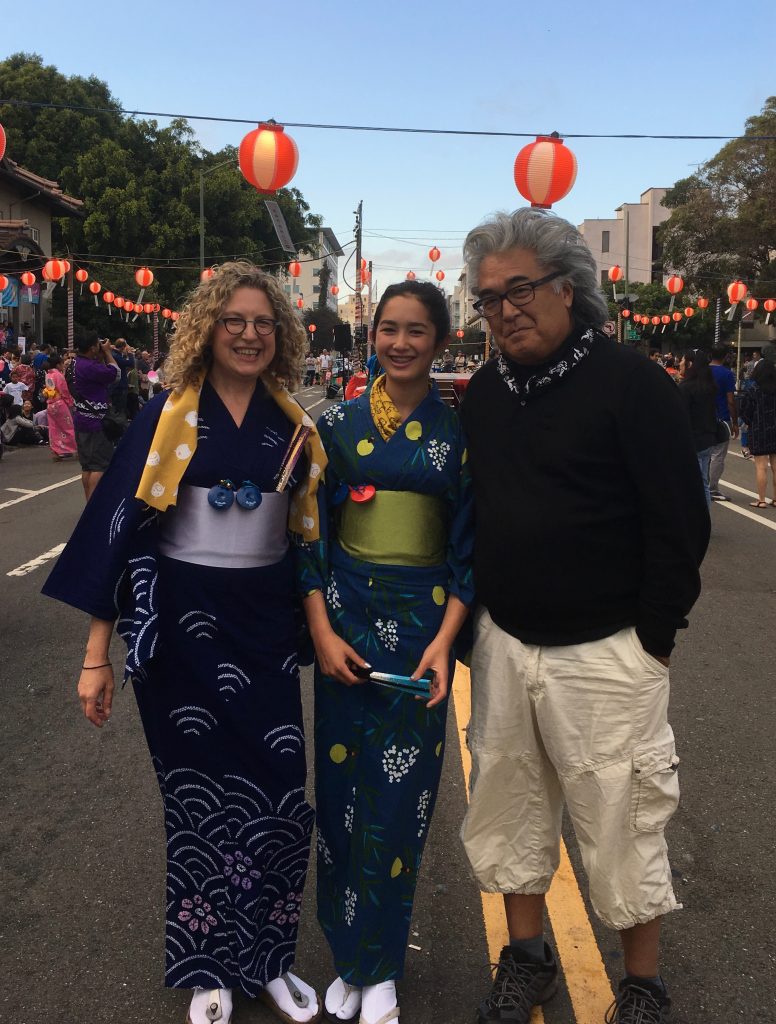 Growing up Sansei wasn’t easy. One summer in 1962, when I was 10, I accompanied my Uncle Yuke and cousin Gary to the neighborhood Japanese American barbershop. I watched with amusement as the barber, Mr. Baba, sheared off my cousin’s hair down to a half-inch, except for an inch in front. Then he whisked off the loose hair, pulled off the cape, looked at me and said, “What about him?”

I thought he was joking. Then Uncle Yuke said, “Sure, give him one, too!” I thought, “No way!” as Mr. Baba gestured towards the chrome and maroon-cushioned chair. But my uncle said, “Go on!” and I did what I was told. Within minutes, my Dennis the Menace-cut was sheared down to a half-inch butch. I wanted to cry, but I didn’t.

When I got home, my sisters rubbed my head and teased me. “What happened?” asked my mother, who had given me all of my haircuts until that day. I whined, “Uncle Yuke made me do it,” trying to convey the great injustice that had been done. I wanted her to get mad and say, “Well, he had no right to do that!” But she just laughed.

As a kid, Japanese men seemed immovably bossy and stoic. My father rarely talked — he mostly grunted. If I did a sloppy job mowing the lawn, he grunted negatively. If I did a good job washing the family Chevrolet, he grunted positively. At Nihon-go gakko, the Japanese language teacher bonked me on the head if I gave a wrong answer. At judo practice, the instructor yelled, “Da-me, do it again!” There was no verbal encouragement. If you did really well, you got a ribbon or a trophy or a bottle of soda pop, but no one said, “I’m proud of you.”

The Nisei faced hardship upon hardship during the war and even after. In the 1950s, up to seventy-five percent of Nisei men were self-employed, which means no one would hire them, so they had to create their own jobs and businesses. And they did. They started their own restaurants, dry cleaners, sporting goods stores, markets, florist shops, pharmacies, photography studios, medical and dental offices, and, yes, barber shops.

They were taught to hold in their feelings and frustrations. They were bossy and discouraging with their children because they thought it would make us stronger. When I told a Japanese scholar about my father’s grunts, she asked where his father had emigrated from in Japan. I answered, “Mito in Ibaraki.” She nodded. “Mito men don’t talk much. You shouldn’t take it personally.”

In 1991, my parents came up to the Bay Area for a reunion of the 522nd Field Artillery Battalion, the artillery unit of the 442nd. In 1943, my father had volunteered from the Heart Mountain Internment Camp in Wyoming and joined the regiment of mostly Hawai‘i Nisei to fight in France and Germany. I showed my short film, “Days of Waiting,” about a white woman, Estelle Ishigo, who accompanied her Nisei husband into the camps, and who was a guest speaker at the dinner. In the evening, the vets were getting together in a hotel suite and my father asked me to go with him. My mother said, “No thanks. Too noisy and too much beer.”

My father took me around to meet his Army buddies and said, “This is my son.” They handed me a beer and talked story. Someone called my dad “Slack Ass” and they all laughed. I’d never seen him so relaxed, so verbal. I realized he’d left a part of himself in the war. He could be himself with these guys. That night, we talked more personally than we’d ever done before.

My parents are gone now and I miss them. The Nisei were so reliably present for so long — unfolding chairs at community events, selling food tickets at bon odori, telling fishing stories, gambling stories, monku-ing about the service at the restaurant they went to last Sunday. They had spirit and resilience, lots of gaman. They were hyper-skilled and efficient. Nisei gardeners in Los Angeles in the ’60s were like samurai, except with lawns and hedges, and no one will ever make a potato salad as good as my mother’s. The best of them exemplified humility. I’ll never forget the 442nd veteran, a retired postman from Denver, who described seeing a bullet go through his friend’s helmet, then grabbing a mounted machine gun and charging up a hill to capture a company of Nazis. He told his story like anyone would have done what he did, speaking without emotion, except for the tear that ran down his cheek when he spoke of his friend.

The Nisei gave the Sansei a push-start, then we had to figure things out for ourselves during the huge social and cultural changes of the ’60s and ’70s. We faced much less overt racism, but there was still plenty for us to deal with in our lives. Insidious prejudice can be more undermining and destructive than blatant prejudice.

It was different for us, but the Sansei are as complicated and conflicted as were the Nisei. We grew up with a difficult mandate: Assimilate as much as possible, but be good Japanese Americans. That’s a puzzling task. Some moved as far away from their JA side as possible. Their children don’t know any Japanese words besides “sushi” and have never eaten a Botan (chewy Japanese candy with a rice paper wrap). I recently met a Yonsei who didn’t know my name was Japanese and asked me to spell it for him. Others do a few things: know a few words; prefer rice to potatoes; have seen “Seven Samurai,” “Zatoichi” and Miyazaki; and maybe visited Japan. Others do more. They keep the community going, play a part in keeping the culture alive. Maybe they’ve even pounded some mochi.

Something connects us. I have a friend who is totally different from me, but somehow we bond as Sansei — the good, the bad and the quirkiness. Recently, when he was laid up with the flu, I offered to bring him some chicken soup — he asked for a dozen Spam musubi instead. I thought, “OK, I guess that’s not weird.”

The word “Sansei” has power. If you’re going to call yourself that, say it with pride, or don’t bother. Whether one acknowledges it or not, there’s shared experience there — how we grew up, what our grandparents and parents went through, the expectations and prejudices that shaped us. We assimilated, some of us held on, some of us pushed it away, others fell out and came back, but Japanese American pride was hard fought for and doesn’t die easily.

It took me a long time to get comfortable in my Japanese American skin and to find my place in the community as it changed, shifted and evolved. I don’t know what the legacy of the Sansei is. The next generations, the Yonsei and Gosei, will assert themselves and assess who we were and what we achieved or didn’t. When they’re ready, they’ll consider the variables and decide how we rated.

In the meantime, my half-Japanese, half-Jewish 14-year-old Yonsei daughter is miles smarter, more aware and confident about whom she is than I was at her age. She responds immediately if someone is racist, sexist or homophobic. Okage sama de. She carries her ancestors from both sides of the family with her. She’s enriched and empowered by her ethnic heritage. And when she danced at the bon odori in Oakland this summer, I was proud of her and told her so.

Steven Okazaki has been an independent filmmaker for four decades. He is a four-time Academy Award nominee and won an Oscar and a Peabody for “Days of Waiting” in 1991. His other films include “Unfinished Business” for PBS; the low-budget comedy “Living On Tokyo Time,” the Primetime Emmy-winning “White Light/Black Rain” and “Heroin: Cape Cod” for HBO. His most recent documentary, “Mifune: The Last Samurai,” is now available on Netflix.

He lives in Berkeley with his wife, writer Peggy Orenstein, and their daughter.