In 1968, Rona Adams, a retired Army captain now living in Kailua, O‘ahu, was serving as the head emergency room nurse for the 3rd Field Hospital in Saigon.

Memories of that experience rushed back to her this past May during a Honolulu memorial service marking the 50th anniversary of the start of the Vietnam War.

“I get choked up and get chicken skin thinking about it because I did two tours over there as an Army nurse. And I see where I was and know what it was like,” Adams said in an interview.

Listening to the keynote speech by retired United States Army Maj. Gen. Patrick Henry Brady, who was a helicopter pilot in the Vietnam War, triggered Adams’ thoughts about the war.

“He said something, asking if there were any nurses here, so I stood up,” Adams said.

Brady, a UH1H ambulance helicopter pilot, was awarded the Medal of Honor for flying a series of three aircraft in one day, rescuing 51 seriously wounded men.

“When he got off the podium, I went up to him and said, ‘Thank you so much, because if it wasn’t for you guys, we couldn’t have gotten them and we couldn’t have saved them,’ and both of us started crying. I was crying, and I don’t mean a few tears,” Adams said.

Hawai‘i knew the cost of the Vietnam War.

Terry Teruo Kawamura was just 19 years old, serving as a corporal in the Army in Vietnam when an enemy demolition team slipped into his camp. Kawamura shouted an alarm as he saw an explosive thrown into his tent.

Kawamura’s Medal of Honor citation reads: “He immediately realized that two stunned fellow soldiers were in great peril and shouted a warning. Although in a position to escape, Cpl. Kawamura unhesitatingly wheeled around and threw himself on the charge. In completely disregarding his safety, Cpl. Kawamura prevented serious injury or death to several members of his unit.”

Two others from Hawai‘i, Sgt. Emelindo Smith and Sgt. Rodney Yano, also earned Medals of Honor while serving in Vietnam.

The Vietnam Memorial in Washington, D.C., lists 285 Hawai‘i residents who died while serving in the Vietnam War. But those without physical wounds were also scarred from their Vietnam service.

As an emergency room nurse, Adams recalled, “You can not go through war, even if you are not toting a rifle; you are in a combat zone and you are running scared, whether or not you admit it.

“In a way, you think you are indestructible, but we have a lot of guys who don’t sleep at night.

“We didn’t have any words like PTSD (post-traumatic stress disorder) back then. I didn’t realize how much it bothered me. I took about a year off, went to the beach; nobody knew I had been in Vietnam,” Adams said.

More than one out of every two native Hawaiian veterans and more than one in three Japanese Americans experienced war trauma in Vietnam, according to research done by the Department of Veterans Affairs’ Matsunaga Vietnam Veterans Project, which was initiated by the late Hawai‘i U.S. Sen. Spark Matsunaga.

Hawai‘i became an important stop during the war years, and Honolulu is where President Lyndon Baines Johnson planned some of the early Vietnam strategy.

In 1966, LBJ met with the leaders of then-South Vietnam for the Honolulu Conference to agree on a strategy of “pacification” — a strategy of “winning over hearts and minds.”

By 1968, LBJ was back in Honolulu, meeting with Vietnamese leaders and pledging to defend the country. It was part of U.S. foreign policy to contain communism and not allow it to spread to countries like Vietnam.

Today the country’s formal name is the Socialist Republic of Viet Nam and is one of five remaining communist countries.

For Hawai‘i, the war did have its own capitalist turn.

In 1968, the Associated Press reported that 11,400 American service men and women arrived in Honolulu every month for rest and recuperation while serving in Vietnam.

Besides serving as a morale booster, Hawai‘i R&R also helped the Islands. Bank of Hawaii estimated in 1967 that servicemen and their dependents were spending $21 million in Hawai‘i.

After the war, Hawai‘i became an early way station for Vietnamese war refugees, but it never became a major source of immigration.

“Vietnamese in Hawai‘i and the rest of the U.S. need to be viewed as, initially, refugees, and not as immigrants to America like other groups,” noted University of Hawai‘i at Mänoa ethnic studies professor Jonathan Okamura.

“They remain a subordinate ethnic group in Hawai‘i based on socioeconomic status indicators, such as family income and educational attainment. The population is small, roughly 15,000, or about 1 percent of the state,” explained Okamura.

For some, the Vietnam War was also a turning point in how Americans viewed their government.

Former Hawai‘i Gov. Neil Abercrombie protested the war and made it a pointed issue in his first political campaign for the U.S. Senate in 1970.

“When I ran for Senate, I made my announcement at the gates of Punchbowl (National Memorial Cemetery of the Pacific) to specifically make the point that we were not anti-military,” Abercrombie said.

“For those of us who were questioning the war, people would come up and say you were being anti-patriotic. Our response was the government has already been overthrown; we are trying to get it back.

“The government was not paying attention to the people involved. There was no discussion as to what the policy of the people should be,” Abercrombie said in an interview.

President Johnson was viewed as a Democratic hero to many, Abercrombie said, because “he passed the War on Poverty, the Civil Rights Bill — we believed in him.

“Then he got trapped in the Vietnam War. He thought, ‘I am not going to be the first president to lose a war,’ and he escalated the war and we all felt betrayed.”

That betrayal opened a breach in the public’s trust and it became part of the legacy of Vietnam.

“The era of mistrust in government came from that point,” Abercrombie said.

“It is fair to say that from that point on, there was a questioning of the government.

“The Vietnam War and Watergate created an atmosphere that derails people’s trust in government.” 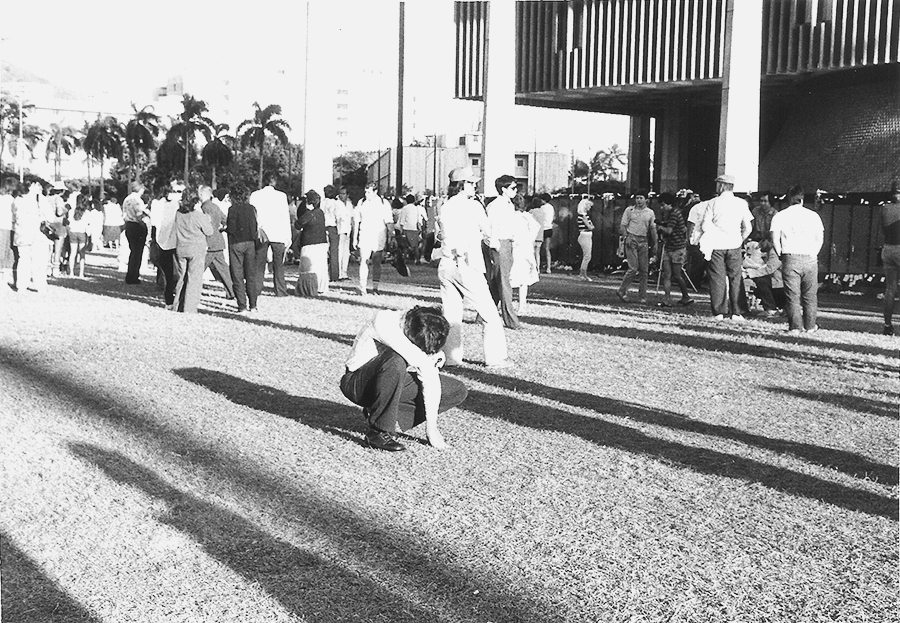