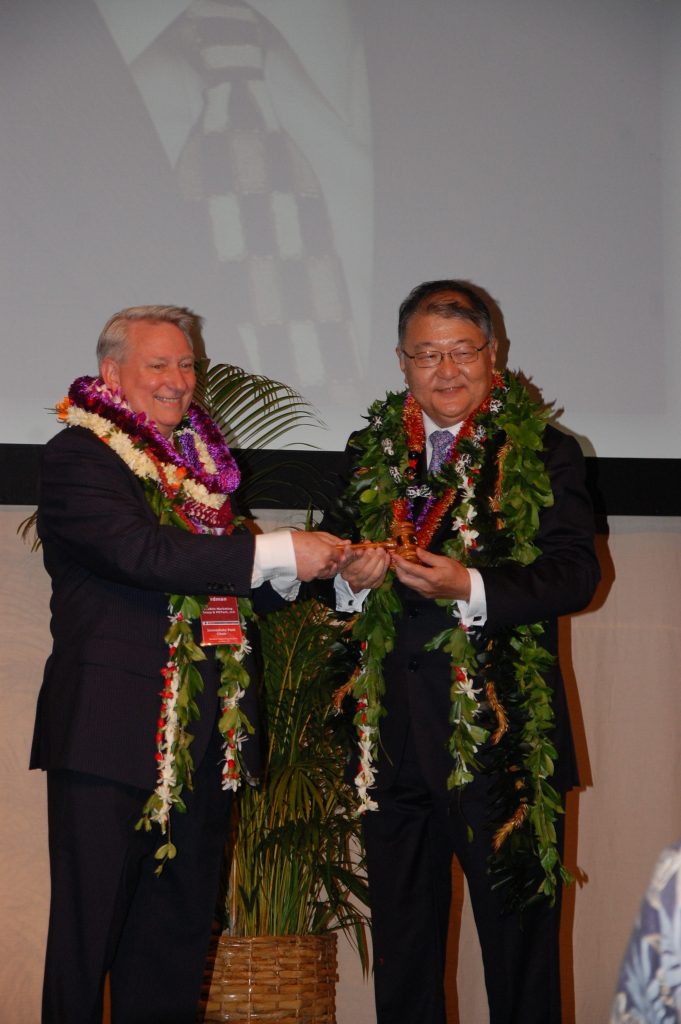 Members of the Honolulu Japanese Chamber of Commerce gathered at the Sheraton Waikiki Hotel on July 19 for the organization’s 13th Annual Inauguration and Generational Award Luncheon.

Brian Nishida, president and CEO of Step Stone Business Development, was installed as president, taking over the reins of the 117-year-old organization from Dave Erdman.

Marian Harada’s Issei parents, Yujiro and Shio Harada, moved to Wahiawä in the 1920s and raised their seven children. To supplement the family income, eldest daughter Marian worked at the Schofield laundry during the day and then as a waitress at Sukiyaki Inn at night. She then worked at Kemoo Farms restaurant, learning table etiquette, food service and the restaurant business in general.

In 1935, the owner of Sukiyaki Inn approached the Haradas, asking if they were interested in buying the restaurant. Shio owned the restaurant while Marian, then 20 years old, managed the day-to-day operations. That venture launched what would become Harada Enterprises.

The Haradas went on to build Dot’s Drive Inn in 1939, Marigold Market in 1947 and Marians at Haleiwa in the 1950s. In 1954, the family purchased a banquet hall behind Dot’s Drive Inn and used it as a venue to showcase Japan and Mainland entertainers.

Catering eventually became one of the restaurant’s specialties and in 1980, a state-of-the-art kitchen was built behind Dot’s Inn. In 1982, Marian recruited and trained her nephew James to take over the family business. She has since passed away. Dot’s Inn continues to be a favorite dining spot for Wahiawä residents. In 1988, Marians Catering was named the exclusive caterer for the Manoa Grand Ballroom at the Japanese Cultural Center of Hawai‘i.

Duane Kurisu, chairman and CEO of aio delivered the luncheon’s keynote address. Kurisu, who is prominent in Hawai‘i’s real estate, publishing and philanthropic communities, shared his philosophy of business and employee development.

He took the stage to the sound of Grover Washington Jr.’s “Soulful Strut” and then explained that the song had inspired his speech. “When someone says you have soul, that’s a compliment.” Kurisu then explained the meaning of soul as defined by the Merriam-Webster Dictionary. Of a leader, it means “a moving spirit.”

“We in Hawai‘i have that evolved soul that can help bridge Japan with the rest of the world,” he said.

Kurisu explained that the way to grow the soul of a company is through its employees. He said employees come first at aio, followed by customers and then shareholders. He said he encourages his employees “to be the best that they can be and to make a difference in their own lives and the lives of others.”

One of the company’s employee programs is aio Discovery, whereby employees have the opportunity to travel to a developing country such as Ethiopia or Kenya and help the community by teaching its youth or building water purification systems. The employees come back with a better understanding of themselves and the world around them. Kurisu said many go back on their own to continue helping those communities.