Expressions of love and gratitude flowed through the halls of Pacific Buddhist Academy’s new $9 million campus addition on Sept. 8 as the school community and supporters from Hawai‘i and abroad came together to dedicate the new building. Candles, flowers, incense and melodic chants were offered before a beautiful Buddhist altar that had been handcrafted in Kyöto just for the school. Among the special guests from Japan was Monshu Kojun Ohtani, head minister of Jodo Shinshu Hongwanji-ha (Hongwanji headquarters in Kyöto).

“This new learning environment dramatically enhances our ability to provide students with leadership skills in the service of peace in Hawai‘i’s communities,” said PBA’s head of school Josh Hernandez Morse. The expanded learning space also enables PBA to double its student enrollment from the current 70 to 140 students.

The new 12,000-square foot multipurpose building on the slopes of Punchbowl is located behind the Honpa Hongwanji Hawaii Betsuin temple, on the Lusitana Street side of the campus. It gives PBA eight new classrooms; a science lab designed for microbiology and physical science applications; studios for fine arts, music and filmmaking; a tearoom and movable walls providing flexible learning spaces. Rim Architects Hawaii incorporated open spaces with natural lighting into its design, such as an outdoor natural amphitheater that can be turned into a learning space or a gathering area. Additionally, teachers will be able to use various rooms for their lessons rather than being limited to just one room.

“It’s thrilling to have such an expansive new science lab,” said science teacher Steven James. “Until now, we’ve had to conduct labs within the confines of a typical classroom, but with new dedicated lab space, so many possibilities open up to us,” James said, excitedly. “This will give us the opportunity to expand and redesign our science curriculum to be even more research- and project-focused than it already is. We can take students well beyond lectures and simple labs toward meaningful scientific experiments.”

PBA’s students are just as excited about their new learning environment.

“I’m so excited,” said freshman Kona Min Chew. “I think studying is going to be a lot easier because more space has less distractions.”

Sophomore Ashley Galicinao-Ripley and her classmates plan to give their campus lots of tender loving care.

“I wasn’t expecting the classrooms to look so nice. I am very excited!” she exclaimed. “Once a week, the students clean the school. Since the new building is so nice, it will motivate us to keep the school clean and take care of our school,” Galicinao-Ripley added.

Yvette Lee was happy for her son Royce, a sophomore, who will have a little over two years to enjoy learning in the new building.

“I am incredibly proud of the teachers, faculty, parents, supporters and students at PBA. The new school building only serves to enhance and uplift our neighborhood,” Lee said. “Our future can depend on PBA to raise outstanding citizens. My son and his classmates can hardly wait to move in!”

Inscribed on the Donor Wall in the building’s central lounge and gathering space are the words, “Ho on sha toku — With deep gratitude for the many donors who joined as one to build this beautiful house of learning.” Topping the list are Jodo Shinshu Hongwanji-ha, The Harry & Jeannette Weinberg Foundation, Inc. and Honpa Hongwanji Mission of Hawaii. Each organization donated between $1 million and $2.3 million to the new building. Also listed are over 50 individuals and organizations that supported the project.

The new building is the result of efforts, big and small. For example, current Bishop Eric Matsumoto and his wife Tamayo set up a coffee stand in front of the school every morning, selling coffee to the PBA parents as they dropped off their children.

One of the numerous gifts from Jodo Shinshu Hongwanji-ha is the new Buddhist altar, which features PBA’s logo. The logo resembles the Buddhist dharmachakra and is one of several focal points of the altar. Pieper Toyama, PBA’s founding head of school and current president of the Honpa Hongwanji Mission of Hawaii’s board of directors, explained the meaning of other symbols integrated into the altar, a few of which can only be found at PBA.

Hanging from the top of the altar are olive branches — traditionally a Western symbol of peace — green leaves representing the past, white flowers for the present and black olives representing the future. They also symbolize the impermanence of time. The sliding doors that protect the altar are decorated in gold leaf. Artists in Kyöto also painted images of two guardian dragons on the doors. The dragon on the left door clutches a pearl of wisdom in its claw.

Pacific Buddhist Academy has come a long way since the visionary Bishop Yemyo Imamura, second bishop of Honpa Hongwanji Mission of Hawaii, who served from 1900 to 1932, first articulated his dream for an English-language school that melded American democratic principles with Buddhist teachings of peace, compassion and interconnectedness. Pacific Buddhist Academy is that 21st century reality.

In 2001, under the leadership of then-Bishop Chikai Yosemori, plans for an independent college preparatory Buddhist high school were unveiled. The mission of the Pacific Buddhist Academy would be to “nurture generations of intelligent, self-aware leaders with the courage, skills, and compassion to strengthen their communities through peace practice.”

With a donation of $1.5 million from Jodo Shinshu Hongwanji-ha, two buildings on the Pali Highway campus were repurposed into classrooms and office facilities. In the fall of 2003, PBA welcomed its first class of 17 students. Throughout PBA’s 14-year existence, 100 percent of its students have been accepted into colleges and universities. Pacific Buddhist Academy will strive to maintain that record in its 15th year.

During the dedication program, PBA’s taiko performance troupe treated their guests to a rousing taiko performance. The group, Hyaku Sen Ki Kai, meaning “one hundred rivers, flowing to the sea,” was given its name by the late Bishop Yosemori. It is an inspiring image: the Pacific Buddhist Academy ‘ohana of students, teachers and staff together building a high school experience “in a whole new light” for future students.

Pacific Buddhist Academy is still seeking donations to purchase equipment for its science, digital media and music programs. To donate, call the school at (808) 532-2649.

Jodie Ching is a freelance writer and blogger who also works for her family’s accounting firm in Kaimukï. She has a bachelor’s degree in Japanese from the University of Hawai‘i at Mänoa and is a past recipient of the Okinawa Prefectural Government Foundation scholarship. 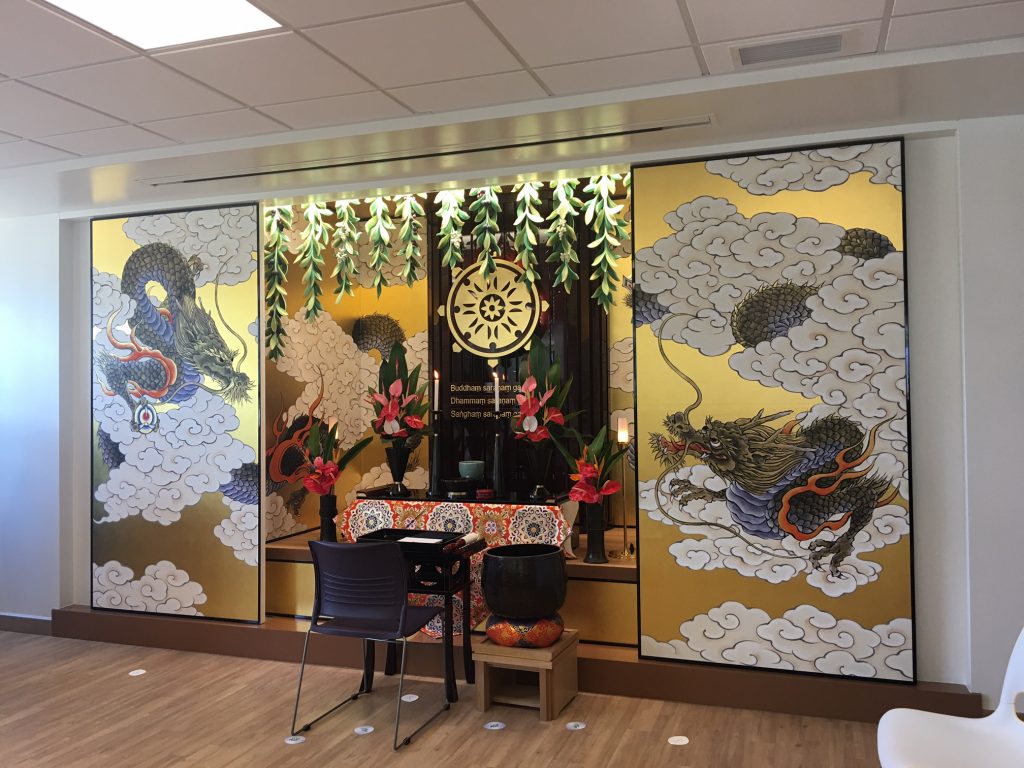