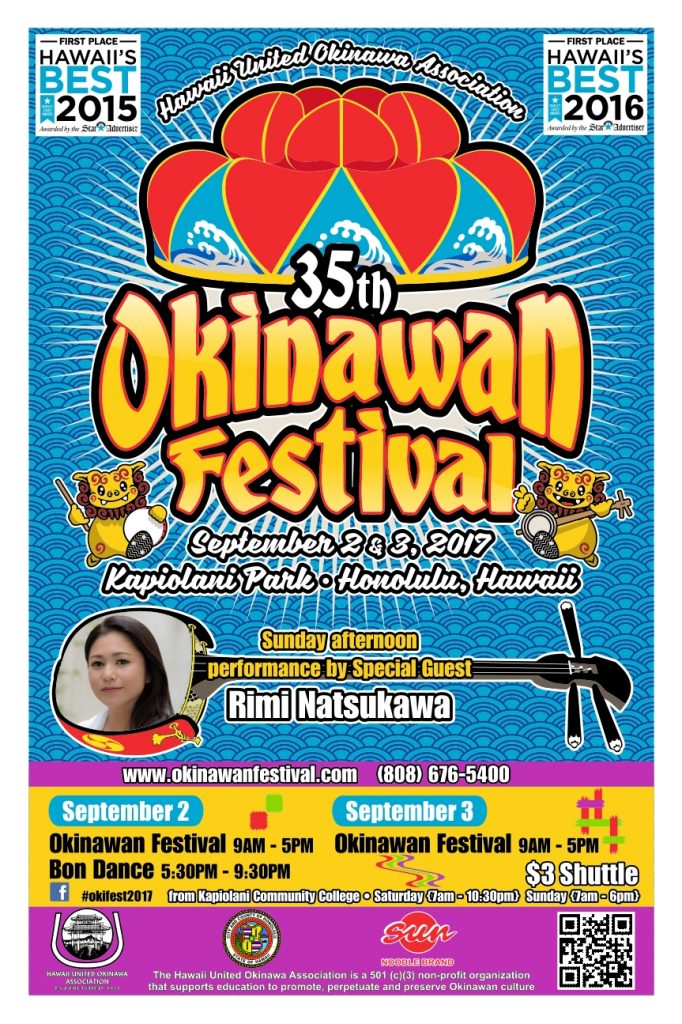 After cancelling last year’s Okinawan Festival just days before the signature summer event was set to open, citing safety concerns over an approaching hurricane, the Hawaii United Okinawa Association’s 2,000-plus volunteers will be out in force “Sharing Uchinanchu Aloha” during Labor Day weekend, Saturday and Sunday, Sept. 2 and 3, at Kapi‘olani Park. The Festival promises to be a weekend full of delicious food; great cultural entertainment, highlighted this year by a special performance by songbird Rimi Natsukawa from Okinawa; an expanded Cultural Tent; and lots of fun and fellowship for people of all ages. The festival promises to live up to its selection as “Hawaii’s Best Ethnic/Cultural Festival” in the Honolulu Star-Advertiser’s Hawaii’s Best People’s Choice Awards in 2015 and 2016.

The Kapi‘olani Park Bandstand stage will be the setting for continuous live entertainment, including two performers from Okinawa — Radio Okinawa’s 2017 Miuta Taisho song contest winner, Airi Ishimine, on Saturday and Rimi Natsukawa on Sunday. Rounding out the program will be Hawai‘i’s own homegrown performing arts groups, sharing Okinawan culture that has been passed down over the generations through sanshin, dance, taiko, koto and karate.

The first Okinawan Festival was held in 1982 at Ala Moana Park’s McCoy Pavilion. It later moved to Thomas Square and the then-Honolulu Academy of Arts. In 1989, the festival was put on hold to plan for the move to a much bigger venue, Kapi‘olani Park, at the edge of Waikïkï. The 1990 festival also celebrated the 90th anniversary of Okinawan immigration to Hawai‘i. The move to Kapi‘olani Park attracted a larger, broader and more ethnically diverse audience and proved to be one of the most successful means of sharing Okinawan culture with residents and visitors alike.

For more information on the festival, visit http://www.okinawan festival.com. Here is some information to keep in mind as you plan your festival weekend, and read on through this issue for more detailed information on various aspects of the Okinawan Festival.

The Okinawan Festival shuttle between Kapi‘olani Community College and Kapi‘olani Park will run continuously during the festival. You can park free at KCC and hop on the air-conditioned bus to Kapi‘olani Park. A storage compartment on the side of the bus is available to store baby strollers and large bags. The bus drivers will happily assist passengers in getting on and off the bus. The $3 return tickets can be purchased at the festival Information Booth and Shuttle Stop Booth at Kapi‘olani Park.

• At Kapi‘olani Community College: at the city bus stop outside the KCC parking lot along Diamond Head Road.

• At Kapi‘olani Park: Near the parking lot along Monsarrat Avenue.

The Okinawan Festival commemorative pin can be purchased for $5 at the Hawai‘i Okinawa Center and at the festival Information Booth. The pin entitles the purchaser to a FREE round-trip shuttle ride between KCC and Kapi‘olani Park; $2 off a festival T-shirt purchased at the festival; free azuki beans with your purchased shave ice and a special discount in the Festival’s Country Store. You’ll also receive coupons for discounts at Sunrise Restaurant, Tamashiro Market and Zippy’s with the purchase of the commemorative pin.

CONNECT WITH THE OKINAWAN
FESTIVAL ON SOCIAL MEDIA