For the past quarter of a century, only two men have controlled the House of Representatives in Hawai‘i.

Then in 2013, Souki put together a coalition of Republicans and Democrats to retake the speakership from Say. That lasted until this past spring when, on the closing day of the legislative session, Souki was again toppled.

When Souki was replaced for a second time, it was remarkably by someone new, Rep. Scott Saiki, a Democrat who represents O‘ahu’s
McCully to Downtown area. 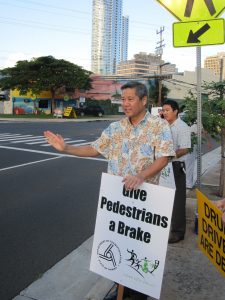 Although Saiki, who turned 53 last month, has 23 years of legislative service, he is somewhat of a new face because he spent nearly half of that time on the political outs.

“I started off as a dissident,” Saiki said in an interview.

“Joe was speaker at the time and I was part of the group that didn’t support him. Over half of my time has been spent as a dissident — four years under Joe and eight years under Calvin.”

For much of that time, Saiki, who has a quiet, but firm speaking style, has not been one for political crusades, but he has always been an independent voice.

“Everyone should be a dissident during their legislative career because it gives you a different perspective,” says Saiki.

Asked what he thought of Scott Saiki after he was deposed by the liberal University of Hawai‘i-trained attorney, Souki said: “Right now I don’t think too highly of him.”

“I think Scott is a very competent person; he is very smart,” added the 84-year-old Souki.

While Saiki said his path to becoming just the 10th House leader since statehood was never plotted or planned, he does appreciate that his leadership of a tight group of Democrats was forged long ago.

“We were pretty close and loyal to each other,” he said.

One of Saiki’s strongest political friends, Rep. Sylvia Luke, has known Saiki since they were both student leaders at the University of Hawai‘i’s Mänoa campus.

“He was a quirky intellectual, soft-spoken, and Scott probably hasn’t really changed that much,” Luke said in an interview.

“I always felt Scott was somebody who would stand up from a base of values he has,” Luke said, adding that over the years she has known him, “Scott has grown tremendously as a leader.”

“His style is collaborative and he is someone who believes you can work to solve problems. He doesn’t look at issues as impossible to handle. You need people who believe things are going to happen and plow along until you get it done,” Luke said.

That style, Luke says, includes Saiki listening in caucus meetings and “not confront people and yell at them.”

“I don’t think I have ever heard him yell at someone, although I know he has been upset with people. I think that sometimes through confrontation, things can happen. But that’s not Scott’s style,” said Luke, who herself doesn’t shy away from telling state department directors or mayors what she expects from them.

Saiki says he was able to win the speakership from Souki because of his ability to bring together his own coalition and then direct it to a new goal.

His ability to overthrow Souki was not because of a dislike for Souki as much as a need for House members to have a broader representation.

Former Gov. John Waihe‘e says Saiki has been on the outside looking in for a long time.

“Scottie has been around wanting it for longer than most people remember,” Waihe‘e said in an interview.

“The next generation is finally taking over, but they have been slowly doing that for some time. I don’t know how much substance will occur.”

“The young guys, with young in quotation marks because they have been around for 20 years; they are not really young,” Waihe‘e noted.

On many issues, Saiki and Luke, who is House Finance Committee chairwoman, have been at the center of liberal and progressive House politics, although Waihe‘e notes that the House of Representatives blocked the “death with dignity” legislation this year.

“They have been more progressive than prior leadership. Whether they are still as progressive is going to be the question,” Waihe‘e said. “They passed the gay marriage bill and that was an actually strong progressive move. But holding up death with dignity would be seen as a step backwards.”

The slow change and reluctance to go into battle was also picked up on by former Gov. Ben Cayetano, who, like Waihe‘e, also served in the state House.

Cayetano recalls having breakfast with Saiki several years ago when Saiki was majority leader under Souki.

“He unloaded his frustrations about how the House was being run. I said why don’t you guys take power,” Cayetano said.

“But, nobody wanted to take power. I think he is going to have to grow in the position. And I think he will.”

Souki candidly acknowledges that the House system of treating new members was to keep them from gaining much political power early in their careers, which tends to keep the incumbents in power.

“When you have freshmen, they are like little birds waiting to be fed; they follow. They ask questions, but that is to learn, not question leadership, and they are not a threat,” said Souki.

Former Speaker Calvin Say advises Saiki to not get bogged down in details and to “keep his eyes open to the big picture.”

“So many of the problems of today are because we just keep kicking the can down the road; nothing is solved,” Say said in an interview.

One of the big issues Saiki said he expects to face is resources. Saiki expects that the state will not collect enough tax money for its needed programs.

“Over the next few years, I think the tax revenue is not up there. We are not collecting what we should be.

“So I think at some point, we are going to run out of money again,” Saiki said.

At the same time, Saiki said, the state is seeing issues of great economic disparity.

“It is like we are losing the middle class — you have the extreme rich and those with low pay.

“The question is how bridge this gap.”