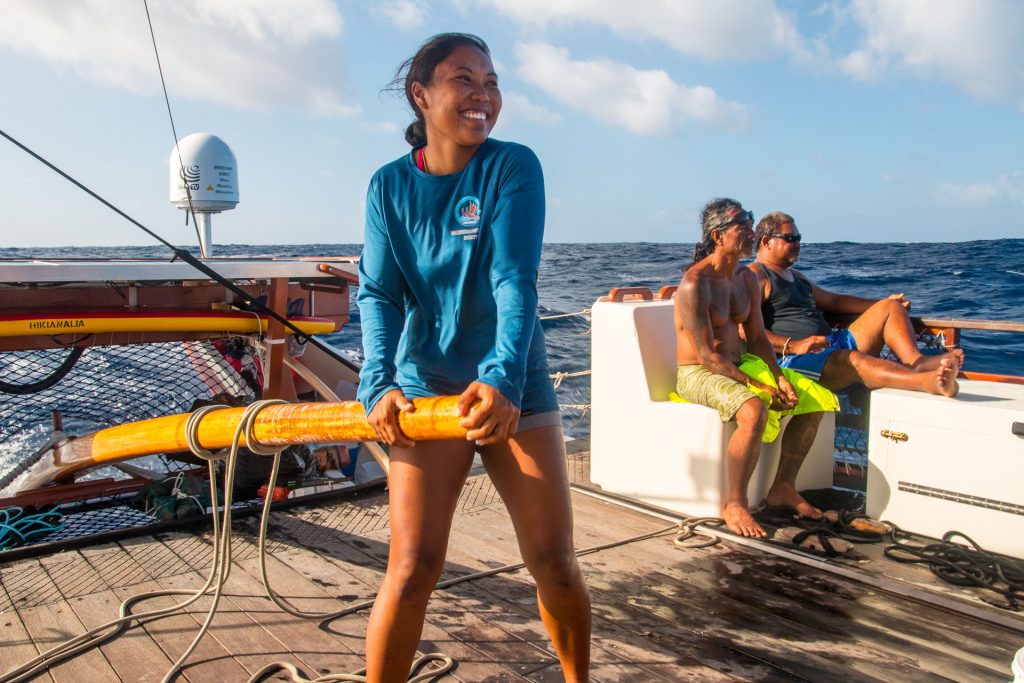 The wind was gusting fiercely as Kalä Baybayan Tanaka hunched behind the communications box to do an interview at sea. It was May 31, a sunny Wednesday afternoon, and Tanaka was sailing homeward through the South Pacific with the crew of the Polynesian voyaging canoe, Höküle‘a.

The canoe was still 17 days away from Honolulu, and it was only fitting that Tanaka was aboard for the final leg. Three years ago, she had traveled the same waters in the opposite direction, en route to Tahiti, at the start of Höküle‘a’s inspiring Mälama Honua — “Caring for Island Earth” — Worldwide Voyage. The Tanaka who was returning, however, was bringing back much more knowledge of the stars, the wind and the sea.

“Each of these voyages has taught me to be more in sync with my environment and see things better,” Tanaka said via satellite phone aboard the wa‘a (canoe). “I’ll probably be learning for the rest of my life. But every time I voyage, I feel a bit more comfortable than I did before and more in sync with the world around.”

Sailing and navigating are in Tanaka’s blood. Her father is Pwo (master) navigator Chad Kälepa Baybayan, who has been sailing with Höküle‘a since 1980. But Tanaka is coming into her own — taking the helm as a first-time captain of Höküle‘a’s sister canoe, Hikianalia, earlier this year. At 34 years old, the half-Japanese mother of two represents the next wave of voyagers ready to carry on the tradition.

Tanaka was born and raised on Maui to a Filipino-Hawaiian-Portuguese-Chinese father and a Japanese mother, Audrey Kaide Baybayan, whose grandparents immigrated to Hawai‘i from Hiroshima.

As a child, Tanaka grew up with many of the traditions of a Japanese American household. Some of her best memories include visiting her grandmother, Kazue Kaide, in Hilo and sharing bowls of ozöni, the hot mochi soup that is a tradition for many Japanese families’ New Year’s celebration.

“When I think of my Japanese heritage, and my mom and my grandma, they’re hard workers and they never complain,” Tanaka said. “It taught me to be a hard worker. . . . Being part of a team, you don’t complain.”

From her father, Tanaka inherited a love for the ocean and a passion for sailing, although she did not sail with him until she was 22.

“We would be there when he would go on voyages, be there to welcome him [home], but we never went sailing with him,” she recalled.

But as she grew older and wanted to spend more time with her dad, Tanaka found herself getting interested in voyaging. Kälepa Baybayan, who is also the navigator-in-residence at the ‘Imiloa Astronomy Center in Hilo, had no idea his daughter was interesting in sailing with him until his mother told him so. One day, he brought her aboard the Höküalaka‘i, the teaching canoe of ‘Aha Pünana Leo, the Hawaiian immersion language school, during a sail from O‘ahu to Maui. All it took were a few evenings of navigation sessions under the stars for Tanaka to fall in love with the world of voyaging. She dove right in and learned all she could.

Until the start of the Mälama Honua Worldwide Voyage, Tanaka had never sailed farther south than Ka Lae Point on Hawai‘i island. The leg from Hawai‘i to Tahiti in 2014 was a huge step for her, made even more special by the fact that her father was traveling on Höküle‘a while Tanaka was aboard Hikianalia.

“You learn it and you do it for short periods of time. Then you get to do a really long voyage along the road of your ancestors,” she said. “I’m feeling and experiencing the same things that they did, my kupuna.”

The thrill Tanaka felt about “fishing an island” out of the sea after two weeks is likely one her ancestors knew well.

Since then, the voyage has been full of memorable and eye-opening experiences. Tanaka has sailed with her father on numerous legs, seen environmental crises on the East Coast and captained Hikianalia. And, between voyages, she gave birth to her second son.

In March, Tanaka was back home on Maui, completing a voyaging program with students at Kamehameha Schools and Maui High, when her time came to serve as captain. She would oversee Hikianalia’s voyage from Hawai‘i to Tahiti to join Höküle‘a — her dad would serve as sailmaster.

“That was really exciting,” Tanaka said. “My dad helped me a lot, being that it was my first time.”

Having captained many legs, Baybayan helped his daughter assemble a crew from around the islands. As navigator, Tanaka’s sole focus had been keeping the canoe’s course. As captain, she was now in charge of the day-to-day operations, checking in with the crew to make sure everything was running smoothly and that morale was good. On the latter goal, she had little trouble.

“The whole voyage was laughter and happiness,” Tanaka recalled. “Almost half the crew were these veteran deep-sea voyagers who were the elders and mentors. [The other half was] a new and younger generation wanting to learn, wanting to know. Overall, the morale was great. It was like it was over before it even began.”

Like Tanaka, many up-and-coming voyagers were born around the time Höküle‘a was gaining prominence. Now, that generation is assuming responsibility aboard the canoe.

“I think the future is really bright,” she said. “What the newer generation of voyagers have to their advantage is that our elders, these master navigators, have already gone through a steep learning curve. . . . They went into this at a time where no one else in Hawai‘i was doing it and they really just pioneered. Because of that, we’re going to be able to excel at what we’re doing, because we have them as our foundation.”

“Just because you are Hawaiian or aren’t Hawaiian doesn’t mean you are more or less entitled to learning this,” she said. “It’s for people who are interested in it, who have a deep desire to learn this.”

Home on the High Seas

On May 27, en route to their Hawai‘i homecoming, Höküle‘a’s crew baked a birthday cake for Tanaka and fellow apprentice navigator Haunani Kane.

A short time later, the crew glimpsed its first sight of home: the cloudless peak of Haleakalä. For the Maui girl, “it felt really good to just see my mountain,” Tanaka said.

If there is anything Tanaka has learned from her travels with Höküle‘a, it is how the world could look if people work together to care for it — and how it might look if they don’t.

Take New York Harbor, for example. Years of overharvesting, dredging and pollution have all but wiped out the oyster reefs that served as natural ocean filters. That means dirtier waters and fewer habitats for fish. But there’s hope: Students at New York Harbor School have been working to restore oysters in the harbor as part of the Billion Oyster Project.

And then there are places like Tahiti, where citizens follow an ancient system of rahui to strictly regulate fishing in certain areas and avoid crises like on the East Coast.

As an educational coordinator with Hui O Wa‘a Kaulua, Maui’s voyaging society, Tanaka is eager to bring all the lessons learned back home. On Maui, she is working with fellow voyager Archie Kalepa to revive the natural environs of Kahoma Valley, once home to terraces of lo‘i kalo (taro patches) before they were replaced with sugarcane. Growing up in Lähainä, Tanaka had never seen the Kahoma Stream flow from mauka to makai until about seven years ago. Nor did she see ever the freshwater fish that spawn where the stream meets the ocean. But before going to Tahiti, she checked on the river and saw several ‘o‘opu, or freshwater goby.

“That was a really happy moment for me to see that,” Tanaka said. “I’m excited for the future.”

With the hard work of teaching and restoring ahead, Tanaka took some time off after returning from the Worldwide Voyage to be with her family.

“I missed my kids the most,” she said. “That was definitely what I was looking forward to the whole trip.”

Her sons, ages 5 and 2, haven’t gone sailing with her yet, and Tanaka said she won’t push them unless they want to get involved in sailing. But she does hope to one day share deep-sea sailing with them. To Tanaka, there’s no better place to learn about sustainability, connection to the environment and voyaging than on the canoe.

“The most learning any student could ever want . . . is being out here in this ocean,” she said. “As our master navigator on board says, this is our ocean road, the road that our ancestors have used for thousands of years, so we need to take care of it. We need to continue to use it and practice or we lose our rights to these roads. I think it’s a beautiful thing.”